I'm having a lot of fun with artichokes these days. The ones I use are canned, as I have yet to find fresh ones, but it's still something different than the ingredients I have used regularly in the past. The artichoke has that slightly sour and fresh taste, a bit like asparagus, but a bit more unique. It goes extremely well with peppered steaks or chicken, and in wok with soy sauce.

The artichoke pizza is an idea I'm loaning from the pizza restaurant in New York, aptly named Artichoke Pizza. What struck me then was the absence of tomato sauce, which I had always assumed was essential for any pizza. Instead, they used a cream-based sauce with artichokes. I loved it, and I had intentions of recreating this masterpiece. 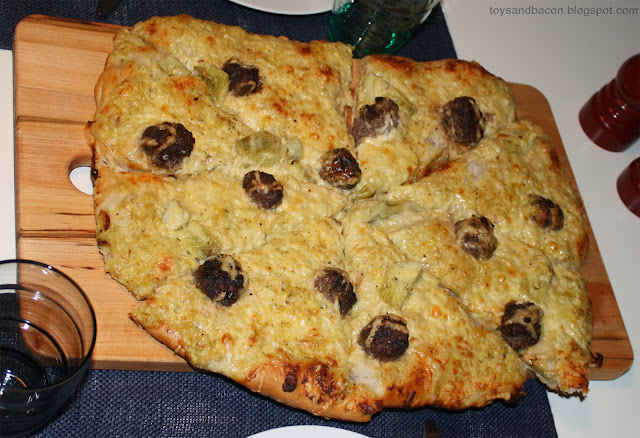 I usually make a great pizza, and I ended up trumping Artichoke Pizza's artichoke pizza. The dough played a big part in this, but also the addition of meatballs. Because, you know, meatballs.

Either way, read on for a recipe on how to make an artichoke pizza.

First up is the dough. Don't go with anything pre-fabricated, or half-fabricated. You want to make the dough yourself. It's not complicated, but it could take some time.

Here are the ingredients for this particular one. 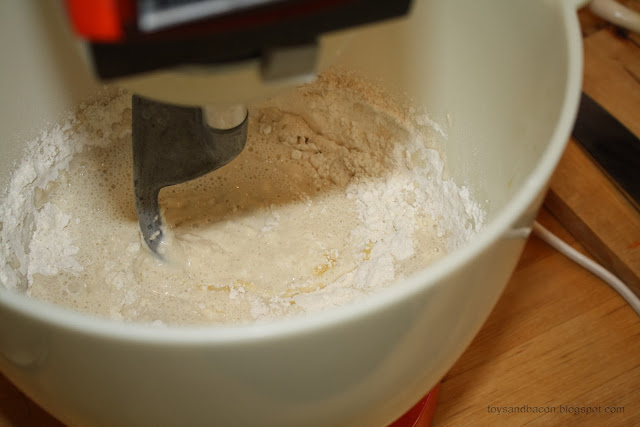 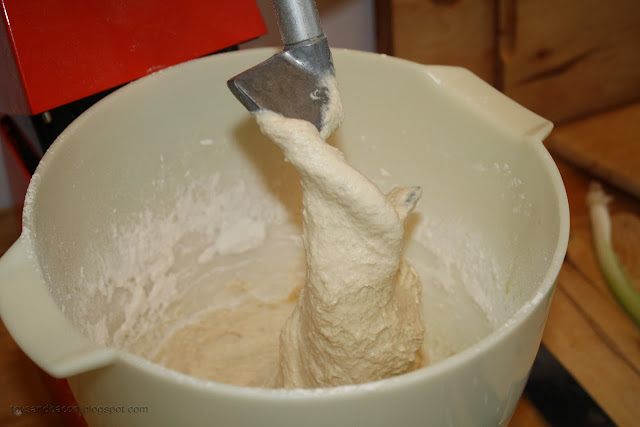 As you can see, I don't have an amount of flour, because I simply add flour until I think the dough is done. Heat up the water to slightly above body temperature, and empty it into a bowl. Add salt, oil and some flour. Mix together, before you add yeast and the rest of the flour. Mix properly until the dough is only barely sticking to your fingers. Right now, I'm using a vintage Kenwood Chief, and it does the trick. You can mix the dough by hand as well.

Place the dough in your oven with only the light on, or somewhere lukewarm. 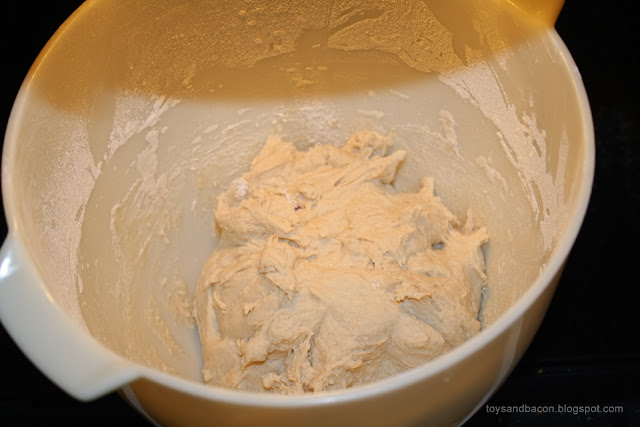 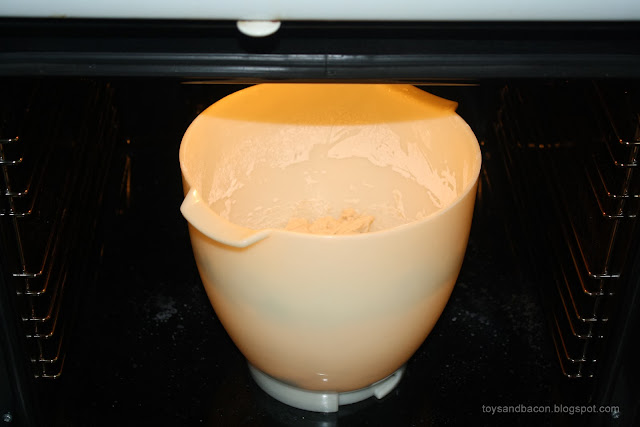 While the dough is leavening, you can start on the artichoke sauce.
The ingredients for the sauce would be:

I had one box of canned artichokes. It contained seven artichoke hearts, and I used four for the sauce. Cut them up, into a casserole, and add a table spoon of water. Boil them on low heat for a while. 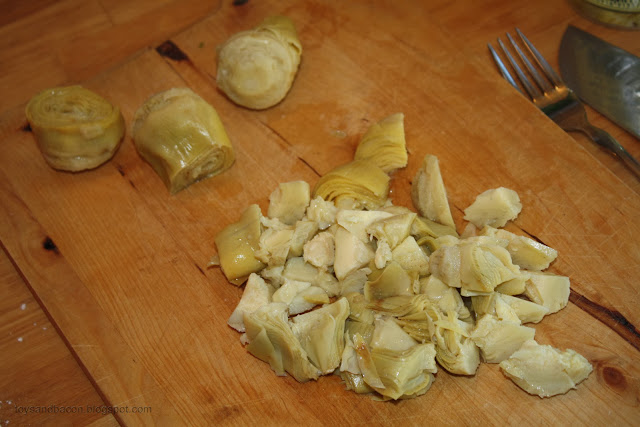 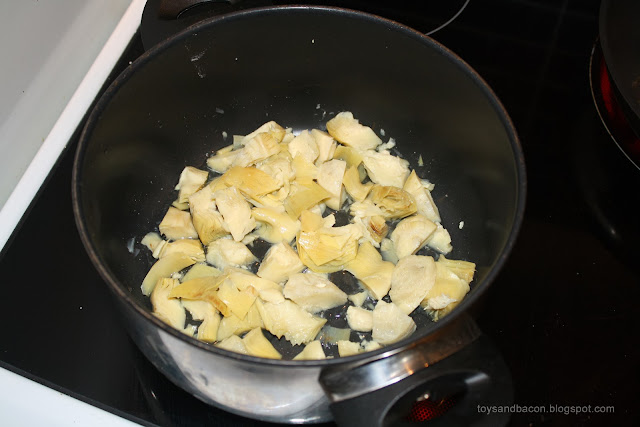 After letting the artichokes boil for about fifteen minutes, I added a generous amount of black pepper and cream. At this point, I should probably have mashed the contents into a fine puree. Instead I added the cheese. I guess I could have thrown the entire contents into a blender, but I wanted the sauce to have a bit of texture. 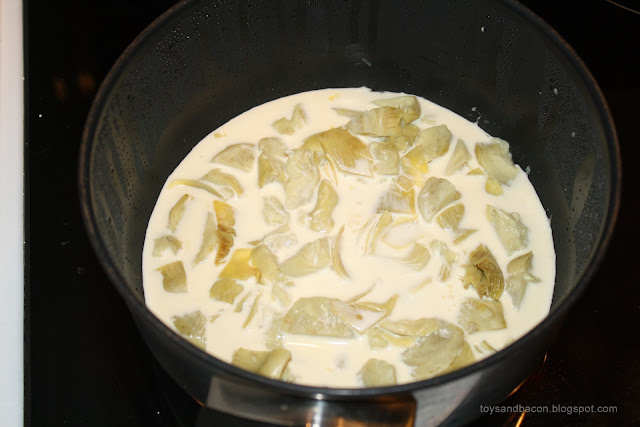 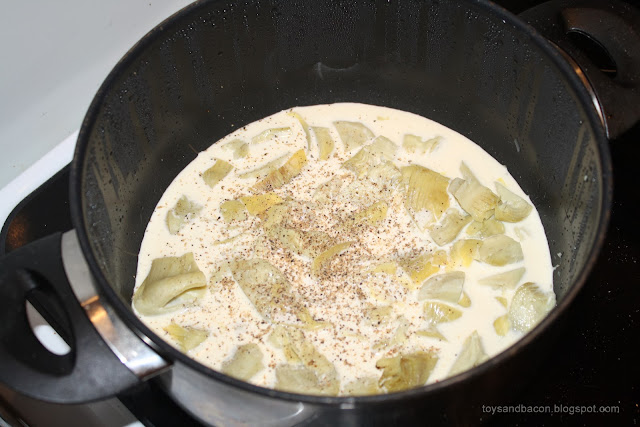 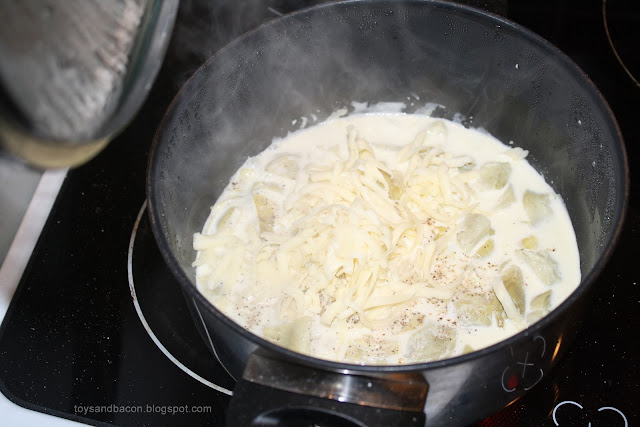 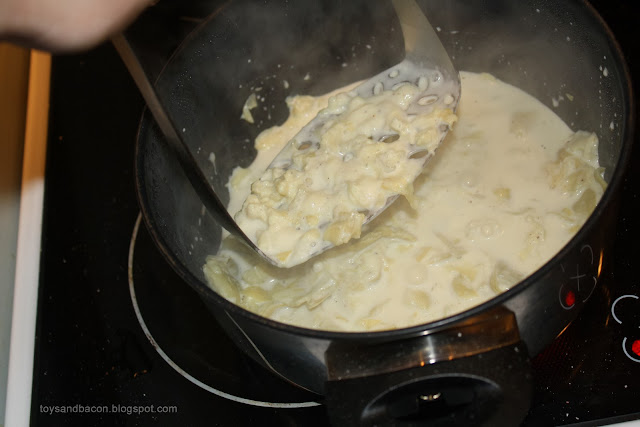 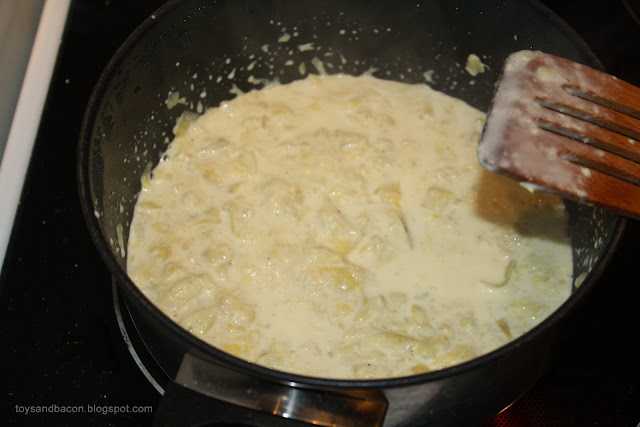 The meatballs weren't really necessary, but they didn't hurt either. Absolutely not essential for making a great artichoke pizza, and easily replaceable by for instance sweet pepper, onion rings, avocado, chicken, or simply more artichokes.

The meatballs were made with:

Mix together, form balls. Fry them at medium to high temperature, but not all the way through. 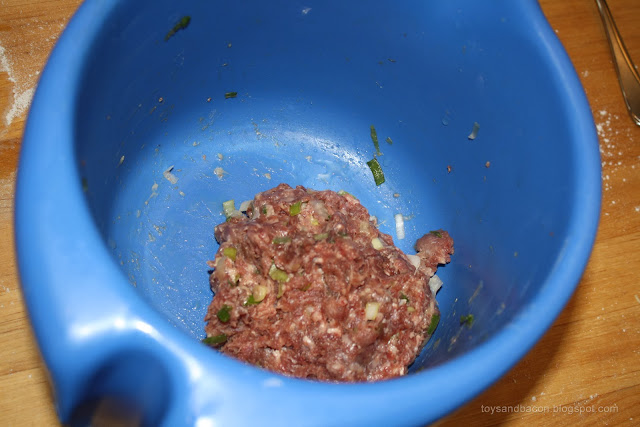 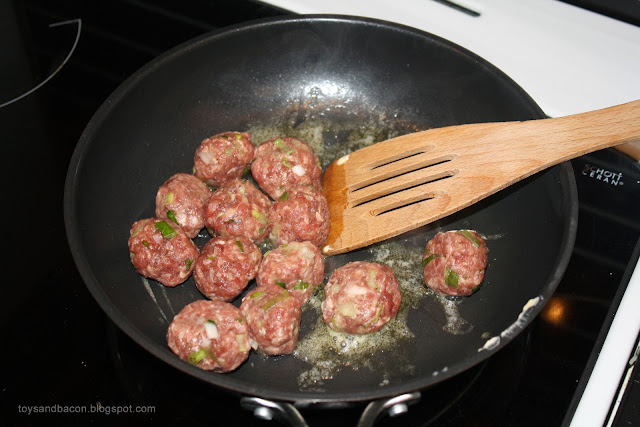 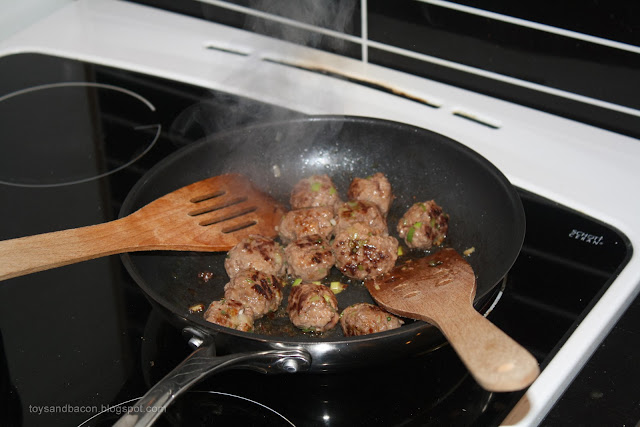 At this point, your dough may have leavened enough - it should be around twice its original size. Take it out, form a pizza pie. Not too thick. It will rise a lot when the pizza is cooking, so don't be afraid to roll the dough thin. And here's a good trick: When you have rolled the dough, put it back in the oven to leaven a second time, for around 15 minutes.

Now comes the time you have been waiting for. Take out the dough, heat the oven up to 225 degrees C / 430 degrees F.
Add the sauce to the dough. Add the meatballs and the rest of the artichoke hearts. Add some more cheese. And there you go. Cook for 15 minutes, or until you think it's done. Enjoy! 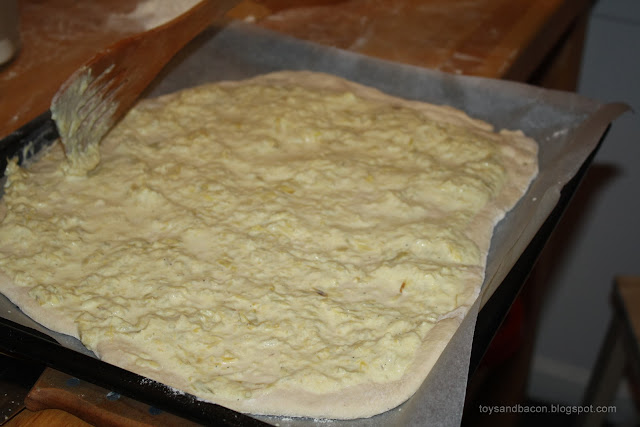 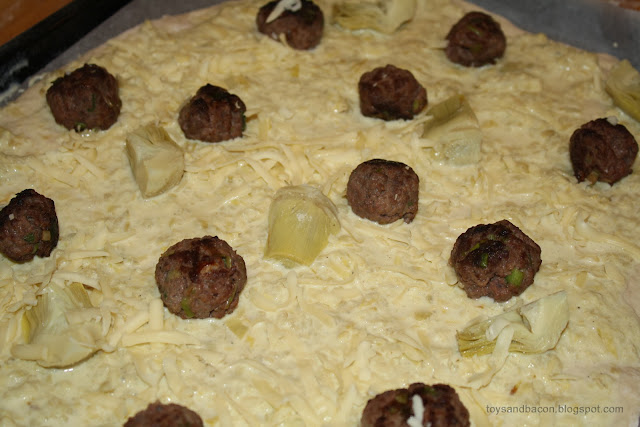 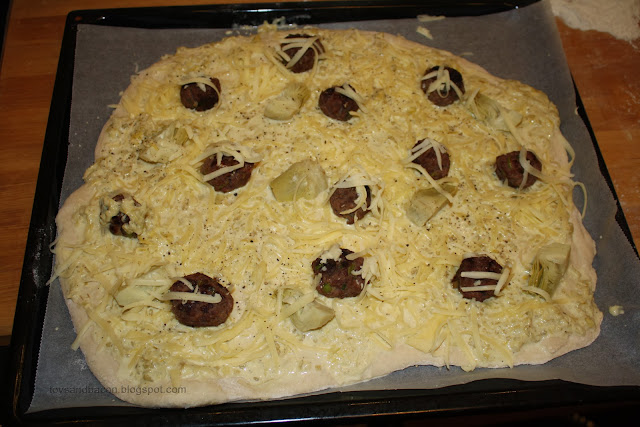 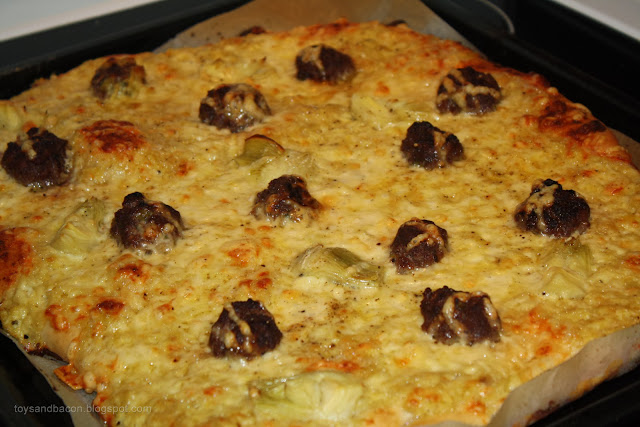 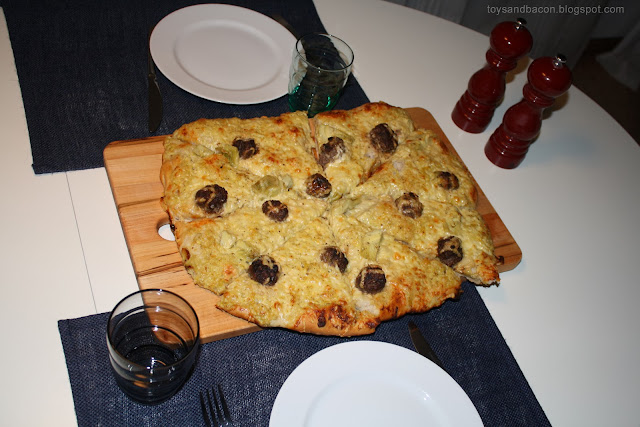 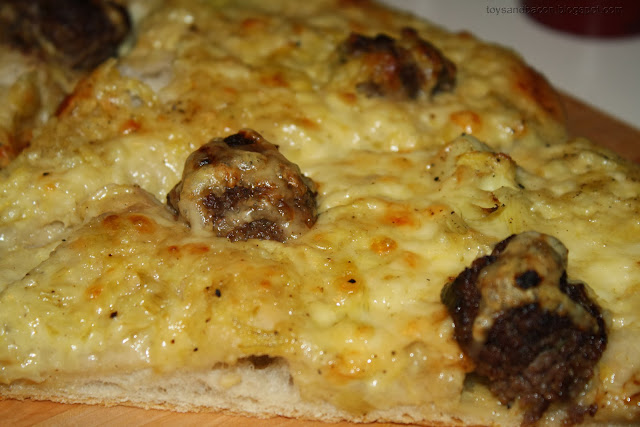