I had a talk with a friend about the old space Lego, and we started looking up some of the old sets. Both of us were very impressed with how cool the old stuff was. We vaguely remembered most of them, either from friends owning them, seeing them in stores or in adverts. The purpose of this list is simply to have a trip down memory lane with some vintage Lego, much like last week's Figure Friday. But this list can also serve as a reminder to how little has changed in Lego since the late 80s, and how that fact really doesn't make any difference. 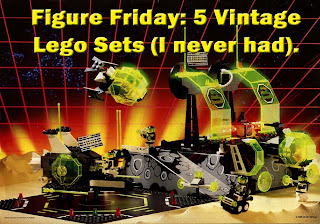 To continue from the introduction, I'll show the latest Lego theme that can be classified as "Space". Here's the 7066 Earth Defense HQ from last year. It's in the sub-line, or theme Alien Conquest, which obviously gives us some references to anything from War of the Worlds, Mars Attacks and Futurama. 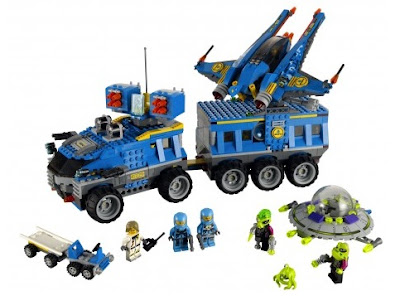 The Earth Defense HQ has a lot of what I consider "New Lego". There are quite a few specially designed parts that us old timers would complain about. But when looking at my old Lego, and looking at these vintage sets, I see just as many specifically sculpted parts. And I can't really defend my old Lego any longer. I loved the specific parts. I loved the neon-yellow translucent canopy and antennas.
This set is the biggest from the Alien Conquest line, and actually has a vintage feel to it. The vehicle is box-shaped, and is mostly built like any old Lego car, except it's bigger and has cannons and a jet on the roof. The parts used, the design of the vehicle, the theme - it's all reminding me of the vintage Space Lego. And in that way, not a lot has changed. But that's not necessarily a bad thing, because the old Space Lego was absolutely brilliant.

I had a lot of the old space Lego, but for the most part it was the smaller sets. For instance the absolutely adorable 6808 Galaxy Trekkor from 1987. I don't mind small sets at all, in fact if I buy Lego today it's either extremely big sets, or those tiny 1 figure and 25 pieces-sets. But I'll admit, I'm a fan of the enormous sets, so when I make a list of what I consider the best Space Lego, most of them will be big sets with 300-500 parts. But not necessarily...

I will do this list chronological because I can't really single out which one of these I like the best, and because it will show some progression to how Lego treated the space themes. 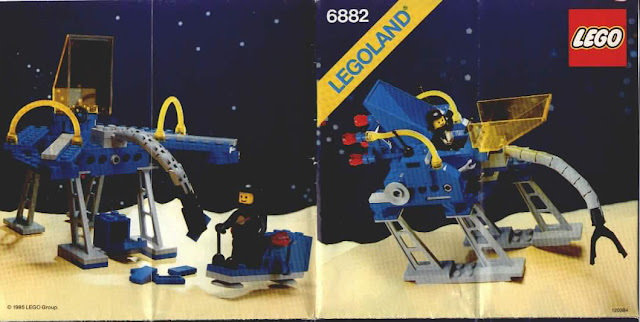 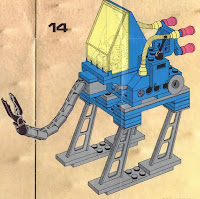 The first thing you will notice here is obviously that the Walking Astro Grappler can't really walk. It took quite a few years before Lego sets got that complex. Other than that, it has quite the play features. Just look at it! Most of these parts were standard in city and space Lego through-out the 90s. It's also one of the earlies uses of Technic parts in standard sets. The Walking Astro Grappler isn't part of a sub theme, in fact the sub themes were first introduced in late 1987. Another thing that weren't implemented at this time was the visors on the austronauts' helmets.
I like this one, mainly because it has tons of parts that could be used in home-made space sets, but it's also cool the way it's depicted in the instructions. 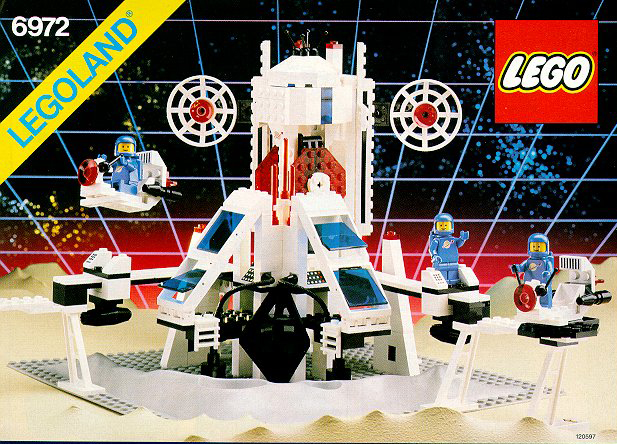 Still not part of a sub-theme, this is one of the biggest sets of the old-school space Lego, with the visor-less helmets. I think the Polaris Space Lab is absolutely brilliant. One of the best Lego bases made. The reason I say this is that it's so clean and white... and theme-less. The sub-themes that would follow had a color-code they followed. the Blacktron was black and yellow, the M:Tron was red and black, the Space Police was red, blue and black, and so on. While the color schemes of the sub-lines was cool and all, there was something more "real" about the pre-88 space sets. Sure, it's sci-fi, but it looks and feels like the Lego dudes, without any pretensions and intentions, simply built a base on an asteroid.
Look how happy the guys (or girls) are. They have a white, shiny base, and all is well. No aliens, no Blacktron robots, no secret space rock mission. It's just a pretty base.
I also have to mention the base plate, with the moon rock structure. This became standard for many Legoo sets in the future, one I will look at further down. 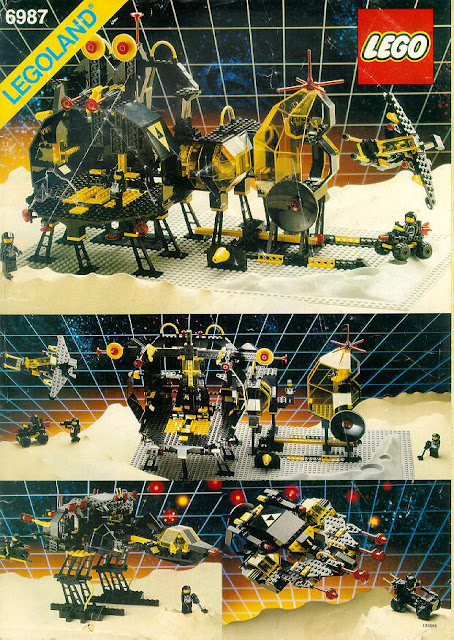 This may come as a surprise, but the Message-Intercept Base was one of the biggest sets made at that point in time. In fact, I can't really see any set bigger in terms of brick count, and when you also take into account the rather large parts that were used, it's not unlikely this was the biggest Lego set ever made by 1988.

The Message-Intercept Base was part of the Blacktron sub-theme. I have no clue what the story behind it is, and it matters preciously little to me now as it did back then. After all, that was the beauty of Lego, you could make your own stories. I have told you before about how I used one of my Blacktron figures as Darth Vader. And you could make your own constructions. In the picture we have quite a few options to how we could use the bricks in the 6987. I think I would prefer the base, but the walking duck-thingy is also fun.

A gorgeous and huge set with tons of potential. 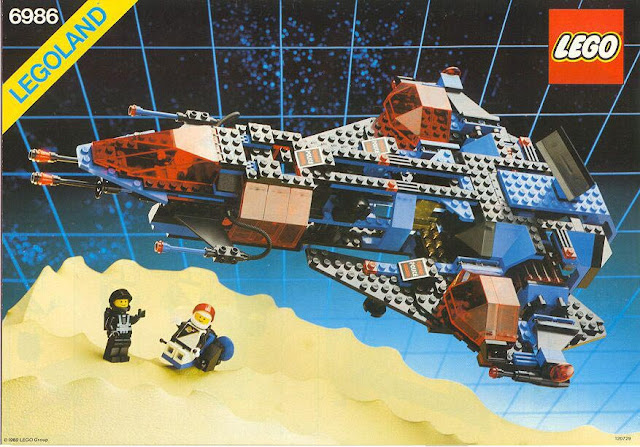 A massive space ship with a huge amount of bricks. The Space Police line has returned at least four times, last time being in 2010. Back then, we didn't have colorful aliens as the bad guys. Instead we had to settle with the totally bad ass Blacktron. All black, you just know this guy is the business. And he's definitely up to no good. The  6986 is very reminiscent of the 6985 Cosmic Fleet Voyager from two years earlier. Of course, that ship was not part of a sub theme, and it used a handful of bricks that already was outdated. Still, you can see the similarities.
There is a substantial difference between the two, that at least for me is what separates the old and new space Lego. The shape of the main canopy. 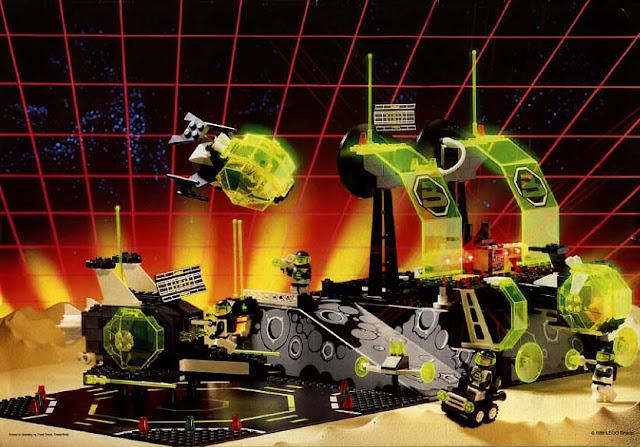 Oh not a lot, just the BLACKTRON II ALPHA CENTAURI OUTPOST!
I had a couple of the Blacktron II sets, and there's a perfectly good reason why I prefer Blacktron II over the  original Blacktron. It's a reason almost embarrassingly simple: It's the yellow. The original Blacktron from 87 to 89 had this darker, almost piss-colored yellow. But the sequel series had this amazingly bright neon color. I'm not kidding, I thought the antennas were able to light up. Yes, the picture above has added shine and flash from camera, but the fact is that the translucent yellow in Blacktron II was gravy for a kid. I'm still fascinated.
The base itself is decent, it's got a large ramp, a landing platform, a few smaller vehicles. It's all cool, lots of play value. 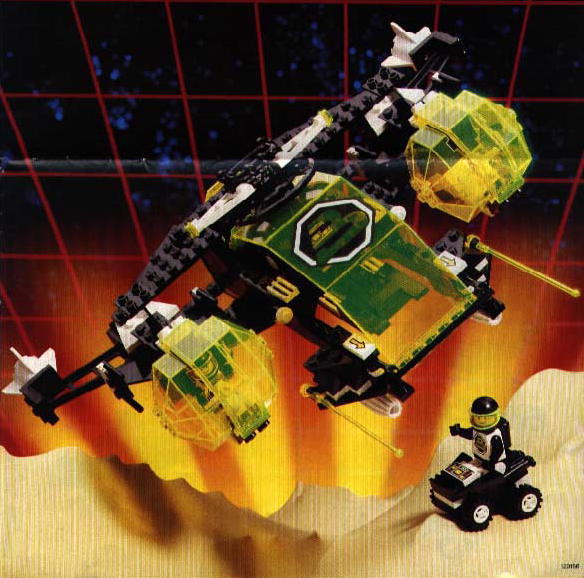 One set I had was the 6981 Aerial Intruder. Today, I would probably be annoyed that the center canopy didn't close, and that the pilot was likely to fall out during flight. But back then.. What am I saying? Today I still love this toy! Look at the laser shooting from the Neon-Spectrum Energy Cannons! Look at the arrows pointing the direction to where the action is! Look at the cute little cockpits on both sides that has no function at all! Look at the heroic Blacktron soldier trailblazing on the planet surface, waving to be picked up by his team mates! And if I just had the Alpha Centauri Outpost, I would have a place to land this awesome toy.

i like the fact that i used to own every piece you just listed here...
i really think the main ship of the space police (2?) series should be here... the black/green one.

The Alpha Centauri Outpost is singularly the best Lego set I've ever owned. The modular little globe ship that unplugged from driving the big ship to fly around and eventually plug into the base itself? So cool.

I really like the fact that you singled out the Polaris 1 Spacelab as your Classic Space base. It was the very first Classic Space set I acquired and before it started to become appreciated? Anyways, it seemed to be flying under the radar somewhat as recently as 2010, but after I bought it I saw scads of reviews making much of its ahead of the curve building techniques. Now it seems to fetch a lot more... I just wanted it since I'd tried building my penpal's when I visited him, but the half gone instructions and missing parts bested me. I've built it three or four times now... but the parts haven't been used in any MOC's yet.

I've cooled off somewhat toward Black-Tron II... I dunno, the 90's overdosed on Neon Green, and for better or worse, the Blacktron 1/Classic Space Amber yellow seriously drew cachet from their unavailability to a 90's kid; i.e. me.