I think it's great when a toy line is big enough to support release of diorama pieces. Back in the day, every toy line had these kinds of small, weird sets. Containing neither figures or vehicles, just stuff that could be used while playing or displaying. Masters of the Universe Classics is a line that's mostly made for collectors, but I can confirm that they have more than enough play value too. This gorgeous diorama piece is obviously a re-imagination of the vintage weapon rack, but it's well made, it wasn't too expensive, and it definitely pleases both people who want to display their toys in a cool way, and those that wants to play with them. 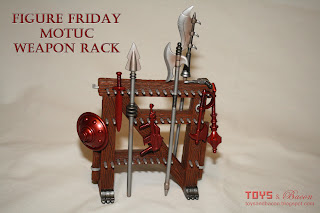 Read on for a few more pictures. 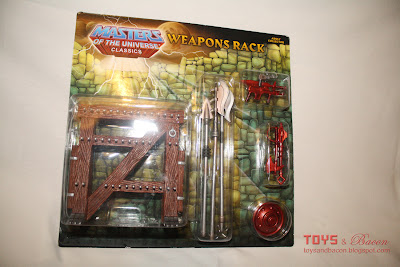 There's a lot to like here. I'll point out a few things: First of all, the details on the rack itself is amazing. The paint job on the rack makes it look like old, oiled wood. The weapons also have amazing paint. I remember the vintage weapons, they often had bright colors not entirely suited for a sword and sorcery setting, nor a sci-fi setting come to think of it. Would you bring a bright green rifle and a orange shield into combat? The weapon packs from both MOTU and G.I.Joe had these awful colored weapons that not necessarily made any sense. But here, even the red has that metallic shine to it, and while it's a bit weird to make a crimson metallic rifle, at least it looks like it could pass for some sort of metal.
The size of it is also something positive. And the fact that you can store all the weapons in various locations, there are pins for storage both on the front, sides and on the back. 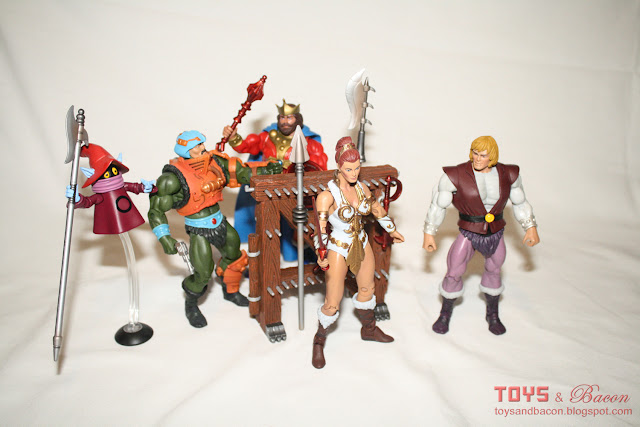 The rack comes with five crimson accessories: A mace, an axe, a short sword, a shield and a rifle. There are two silver/steel halberds, one spear and one tiny gun. All these have been previously released with figures, except the smaller halberd (I think). The big halberd came with Scare Glow, the spear came with Whiplash, the tiny gun and sword came with Man-At-Arms, and so on...
This is in my eyes a lot cooler than the weapon packs that has been released in this toy line. Mostly because the accessories here are of a more "natural weapon color" than in the weapon packs - which contained pink and baby blue items - but also because you obviously get a place to store them. 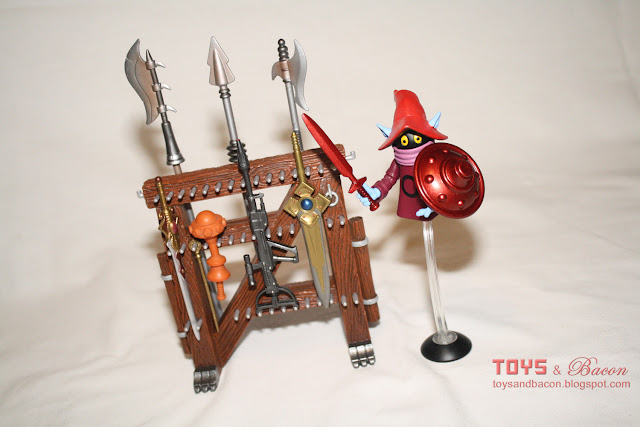 Photo of Orko with the sword and shield makes me wish I had that figure.