Two new ways of doing the steak (do you take the challenge?)

I write this for my sister mainly. I know she reads my blog, and I know she likes a good steak (who doesn't?). So here are two ways of doing the standard steak that may be slightly different than how we usually prepare it. One will have an impact on the taste, the other will affect the structure of the steak. 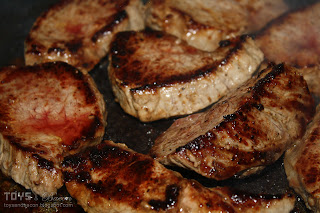 1. Marinade with citrus or other fruits.
This one requires that you prepare the steak beforehand. Arrange the steak as you'd like it, cut it into the size you want to eat. Then simply make a marinade with citrus fruits or other sour tasting stuff, like Kiwi and grapes. I suggest not mixing too many different tastes, but one can't go wrong with the orange/lime combo.
Leave the steaks in the marinade for 3 hours. Make sure they are properly soaked, and make sure there are no carnivores lurking around.
This will in theory give the steak a slightly different taste, but realistically, it will still taste steak. Serve with a strong tasting sauce to contrast the faint taste of sour. 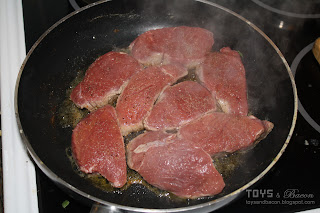 2. Submerge the steak in water
Ok, this one is pushing the boundaries of what we think will work. But it also makes sense when you think about it. You don't want to have a well done steak. The taste disappears and it becomes difficult to chew. The good steak is rare, or at the very least medium rare. This doesn't mean it's raw inside, but it should be barely cooked, red, bloody, delicious.
The deal with this method is to encase the steak in something waterproof, like a vacuum packed plastic, then submerge it in water at 55° Celsius for a while. The time depends on the size of the steak, but since it's not boiling, you don't have to be that careful.
When you want, just fry the steak intensely on both sides for a few seconds, just to create a crust. The idea is that the entire steak will be rare/medium rare, and not just the center.

Challenge accepted. Bring your camera Friday or Saturday, and I'll give the steak a new look!