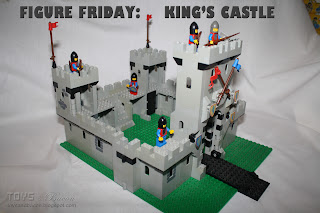 Read on. Several pictures. Some nonsense.


No one will accuse me for not taking care of my toys. I did play with them, and I could play rough if I wanted to. But when the play was over, I gathered all the pieces and stored them safely, instead of having them lying around. Yes, that was the conscious decision I made all by my self at the age of 8. Or someone forced me. I can't remember.
The fact is that my Lego bag from back in the 80s is still intact, with all its contents, and most of the bricks are in decent condition. Sure, some bricks have bite marks, and some have faded completely. But when I sat down and tried to sort out the pieces for my beloved 6080 King's Castle, I found almost every single brick!

I didn't take pictures of the build process, but here's the finished result. 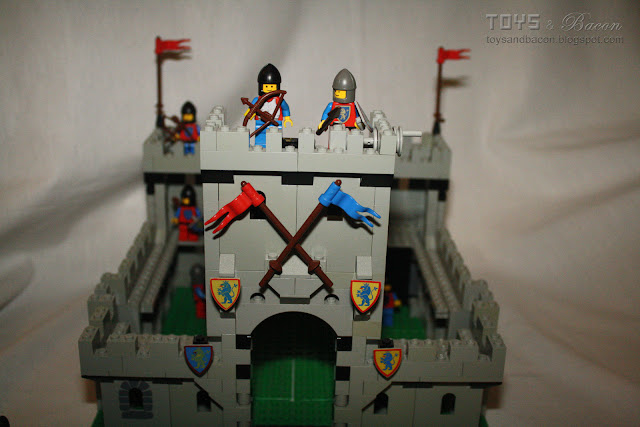 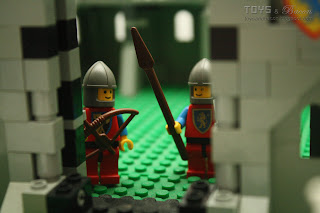 I used this great resource for figuring out what pieces I needed, and for downloading the build instructions. Today, you can find all the instructions on Lego's home page, but I'm not sure if they have the old instructions too. Probably. Above, you can see that I had to use a few black pieces when building the arch. I think those pieces were supposed to be the round gray bricks, which I know I used for many other constructions. I must have lost several of them. I had to use black parts a few other places as well. 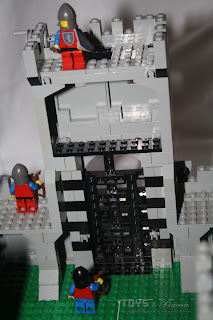 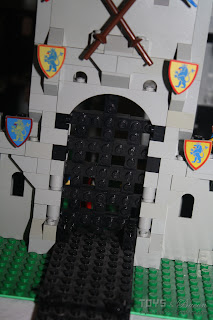 The gate has a winding mechanism, but I didn't get it to work.

I remember being so amazed over this feature as a kid. I guess I am a bit impressed today as well. As if the completely customizable castle wasn't enough in itself, they also added some "standard" play features.


It's not the only play feature either. The castle can be opened, and displayed in what I like to call Fortress Mode. 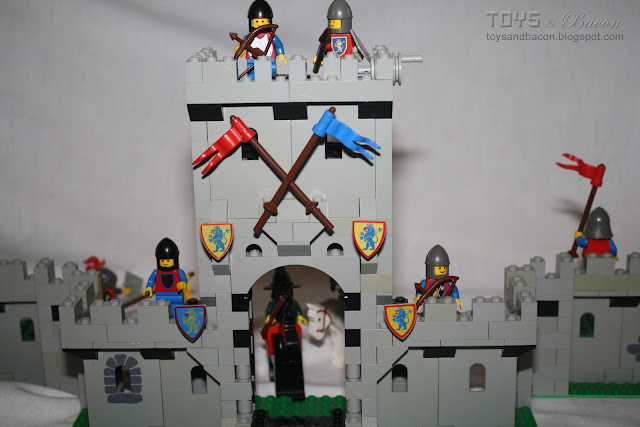 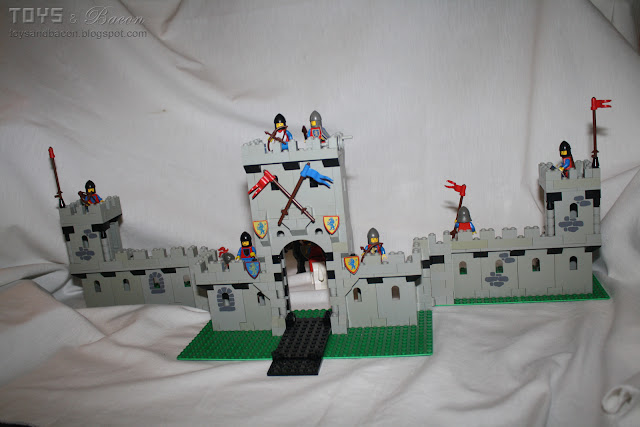 Ready to take on the hordes of evil knights and dragons. Castle Lego sets today are a lot more elaborate, featuring a massive amount of special parts. I don't mind this, but then again, I don't buy contemporary castle Lego. I did pick up the Wizard from a few years back though. A tiny set with a wizard in green robes doing various suspicious research. I think he even came with a tiny dragon. He can be seen in a few of these pictures.
It came on three green plates, but I didn't find the correct ones. 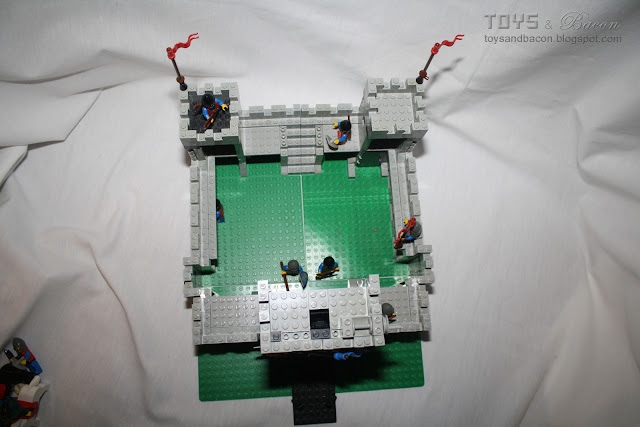 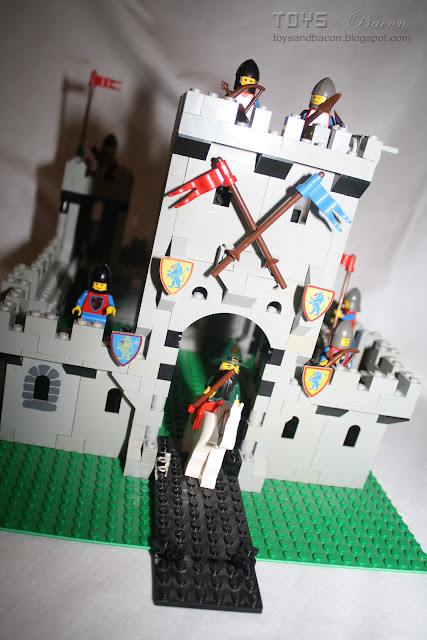 The King's Castle didn't come with the king, as far as I can remember. It was sold back in the mid- to late 80s, and it was one of the bigger sets I owned. I'm a sucker for the massive sets with a naturally long build process, and today I own several sets bigger than the 6080. But this one still has to be a favorite.

I mentioned the features, which are awesome. But even without those, the castle still has a lot of play value. It is after all Lego. I took myself doing a fantasy raid on the castle. Various historic evil doers did their worst, but it seems the valiant knights of the mighty king withstood the vicious attack. 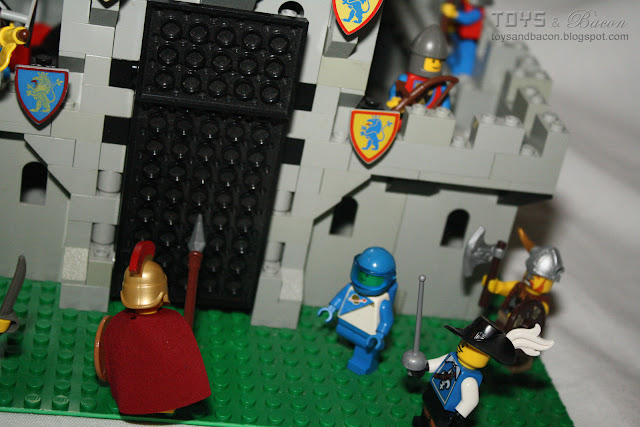 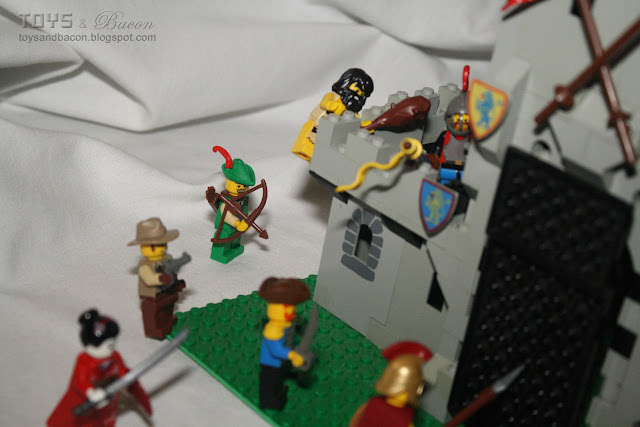 Then there are all the details. First I have to mention the wall pieces. Some of them have stone details, while others don't. This gives a certain variation you'd expect an old castle would have. In the following picture, you can also feel the presence of my old foe, the sundamage. I have the cure for it though, and when I disassemble the castle, I'll give these pieces a second life. 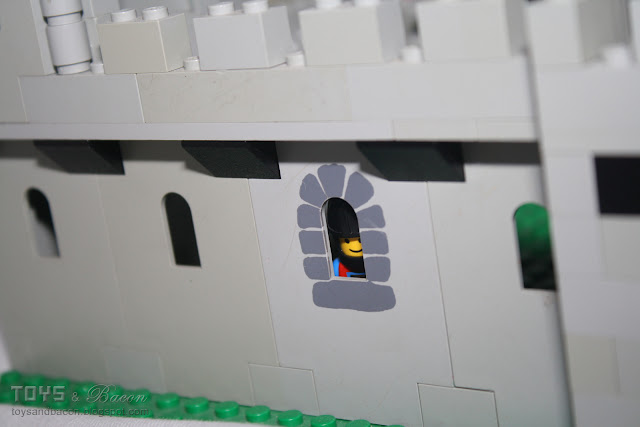 Back when I was a kid, I loved the idea of a prison in the castle. A dungeon. I seem to remember it was more spectacular than this, but I guess I had a better imagination back then. It's just a tiny room in the far right corner of the castle, ground level. It does the trick though. I guess you can use it as a treasure room if you want, but I always saw it as a dungeon.

In Legoland, Denmark, they have built a castle that easily can remind of this set. It doesn't hurt that they have placed lifesized minifigures around the castle wall. 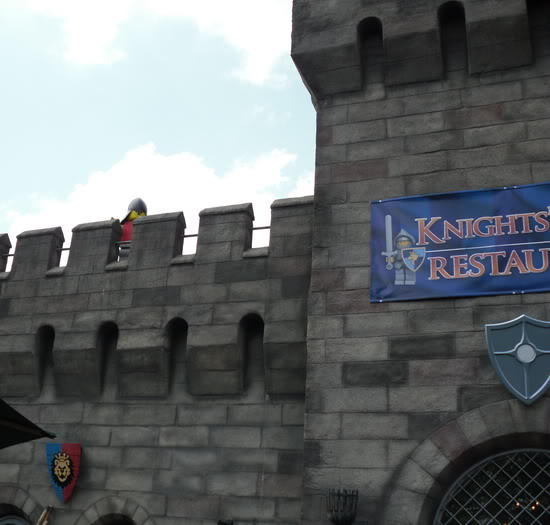 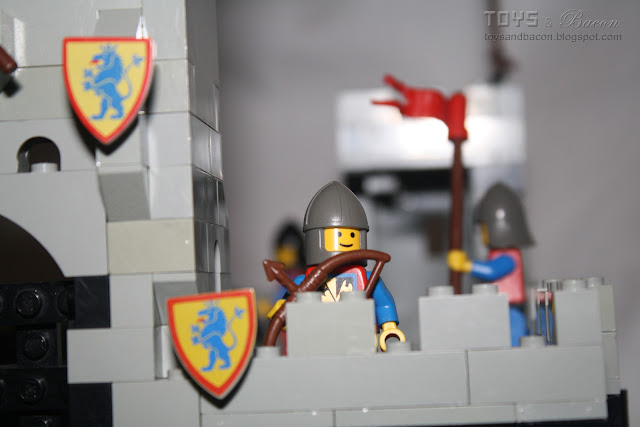 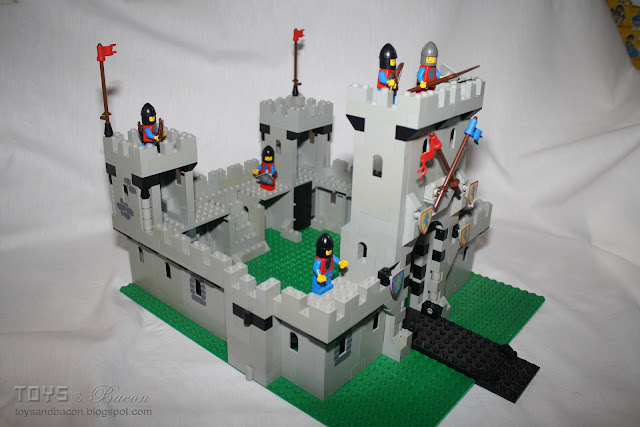 I'd like to say that they don't make toys like this anymore. But that's not true. The contemporary castle Lego (called Kingdoms) is as far as I can tell really good toys, and just recently I saw pictures of a new set of a jousting tournament that I found very amusing. As usual, I can't help but be extremely impressed by Lego, both new - and old.
Have a good weekend, people!
Posted by Jon at 10:28 AM

Fun about your castle.