I reluctantly call it a review, because I feel I know far too little about Minecraft to do them justice. I can call it like I see it, and I can try to put it into context as an action figure collector. But the thing is, with the constant and seemingly endless amount of Minecraft spinoff effects, I'm not sure these action figures are a big deal.

They would have been to me, had I played even a minute of Minecraft, because these are great toys. 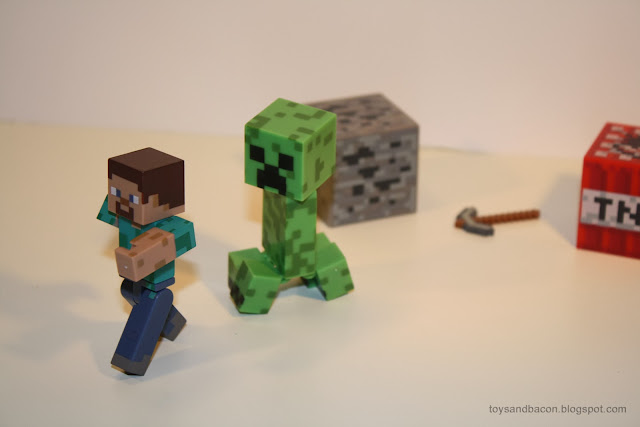 Read on for a closer look, or check out the video reviews on youtube of both Steve and the Creeper.

These four make up Series 1 of Jazwares new line of Minecraft inspired action figures. Jazwares has been making videogame figures for a few years, and do it fairly well. They have made a limited, but kinda cool line of Mortal Kombat action figures, as well as several toys aimed towards the younger generation of collectors.

I must admit, I was surprised when I found these in my local toy store. It's not every day I stumble upon action figures I wasn't even aware was coming out, but I guess that says a lot about how much I follow the Minecraft scene. Anyway, I picked up the entire wave of figures, with the purpose of writing a bit about them, before giving them away. They're great, but as I know people who are more into the game than me, it makes no sense to keep them.

Series 1 are made up by Steve?, Creeper, Zombie and Enderman. From what I have seen of Minecraft, these are all the characters, so I'm not sure who would be in Series 2. A sheep and a pig maybe?
Series 1 also include a playset, which really isn't anything more than a Steve figure packed with a bed and a chest. My store didn't have that one, as I would easily have picked that one up over the regular Steve figure.

Speaking of which.. Steve is the hero, the playable character in the game. I like how they labelled him "Steve?", as they have probably not officially given him a name in the game. He comes packed with his trusted pickaxe, and a block of minerals to mine. The pickaxe fits perfectly into his hand. The hand is in fact sculpted to match the shape of the axe and sword handles.
I really like how simple, yet effective the package is. There's something deliciously retro about bubbles on card, and after opening Toy Biz' Marvel Legends figures recently, it was a delight to open these.
The back gives us a bio of Steve, who's quite the superhuman. Of course, he needs to be, as he's surrounded by enemies. 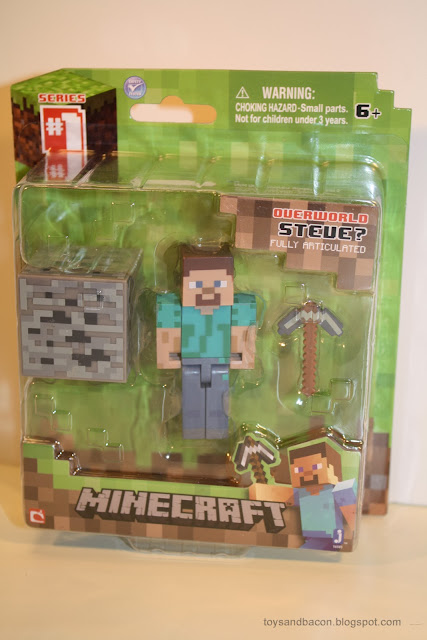 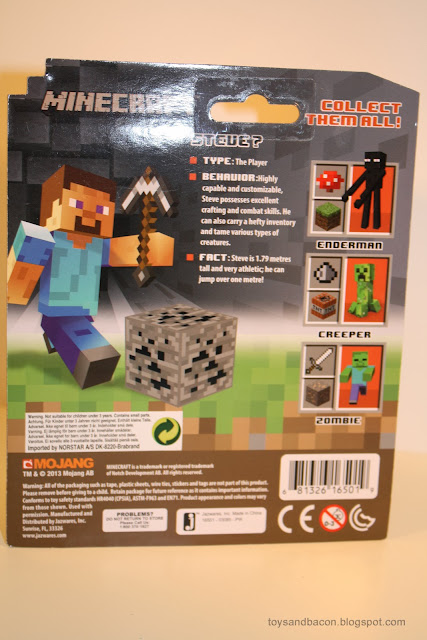 The Creeper is the main villain, or at least the most common villain. He's built slightly different than Steve, to make him identical to his game counterpart. He has no arms. He too comes with two accessories: A TNT block, and something that's supposed to be gun powder. 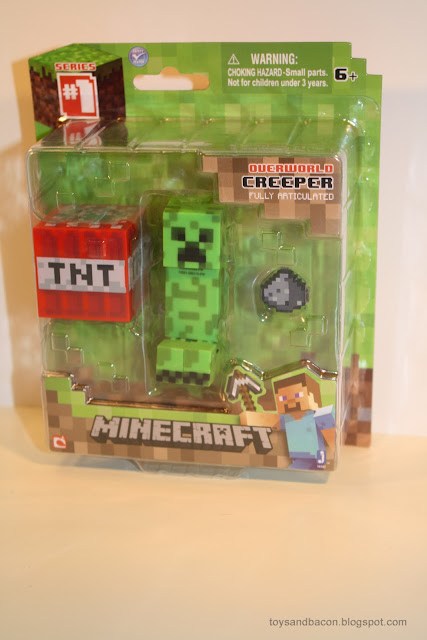 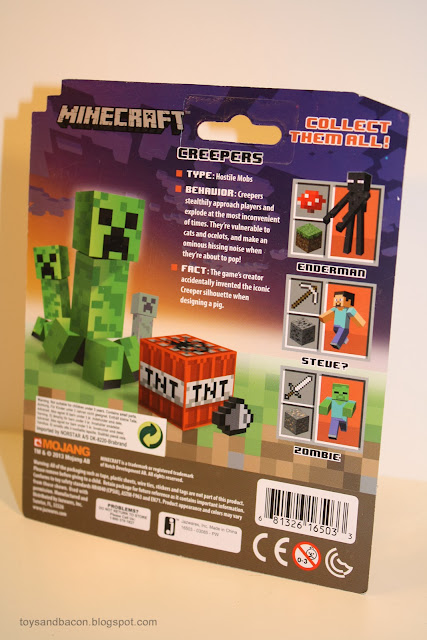 Then there is the Zombie, who I can't say I recognize. Is this Steve? It looks a bit like Steve. Or is this just the way the humanoids look in this game? The Zombie comes with an awesome sword, and a block of... dirt? 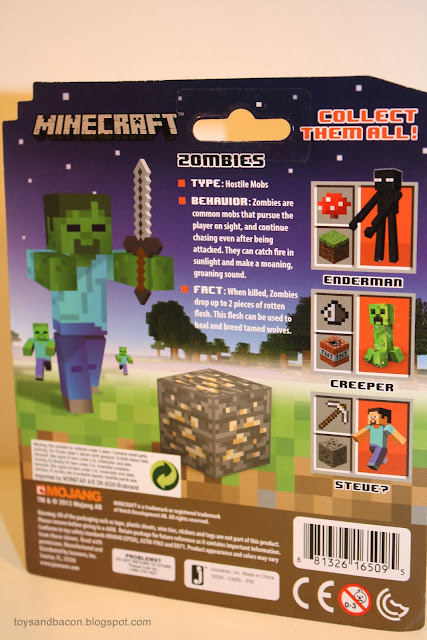 Finally, there's the Enderman. He is colored in blacks and has long arms and legs, and his hands are shaped to hold an entire cube. I think he looks really cool, even though I don't know who he is. He comes with a block of... land? He also comes with something that looks like a brain, or a mushroom. Like I said, I don't play this game. Feel free to correct me. 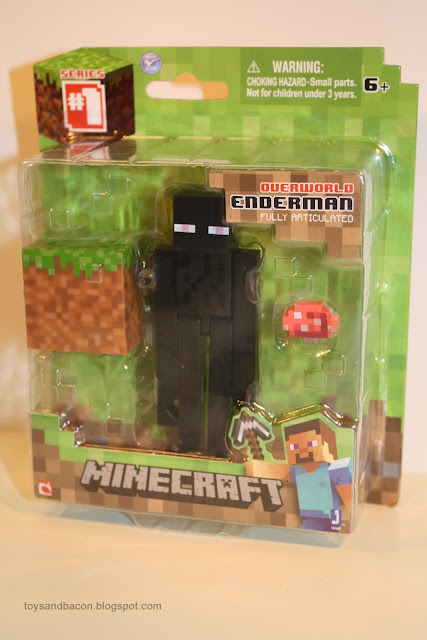 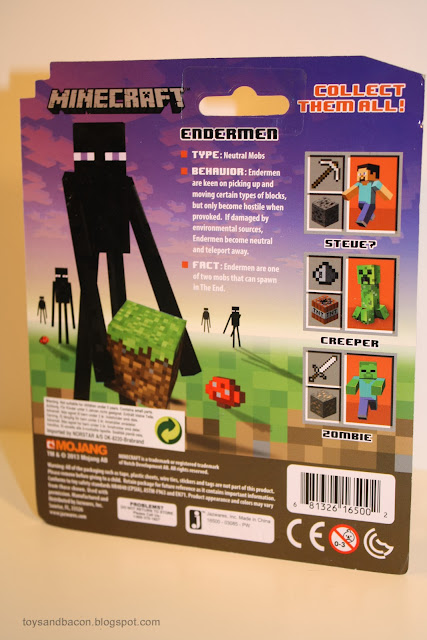 All these figures are listed as "Overworld", which I assume means that there is an "Underworld" in this game. I know the Minecraft Lego sets now also include an underworld set, black, red, lava and all that. It's possible that Series 2 of the action figure line could be made up by inhabitants of the Minecraft underworld. 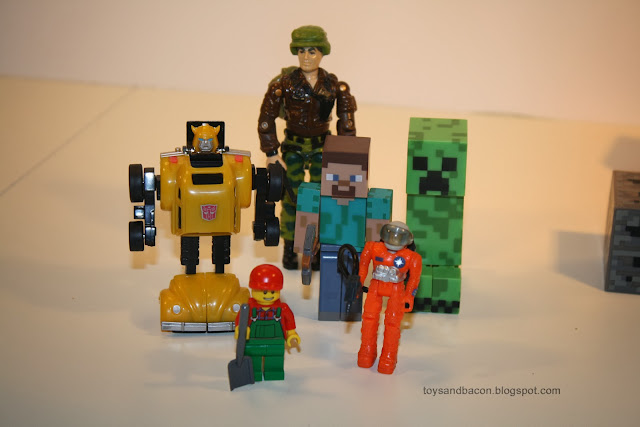 The toys are about 2 inches tall, which puts them somewhere between a Minifigure and an 80s G.I. Joe.
I think the size suits the figures, but I'm a bit curious to why the cubes are so large. Are they that big in the game? On that note, I also think that the cubes could be sold separately, as it makes sense to have many of them - you know, to craft stuff. 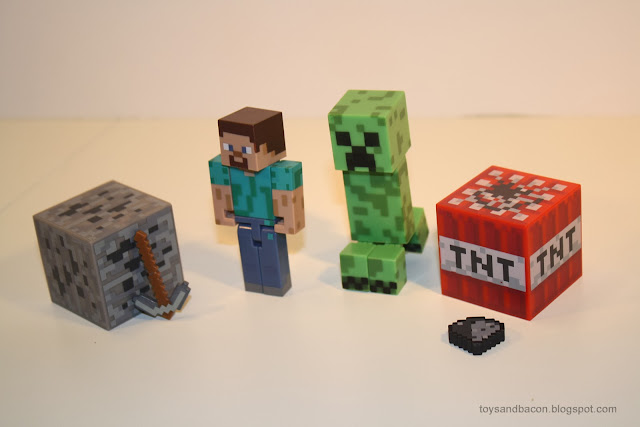 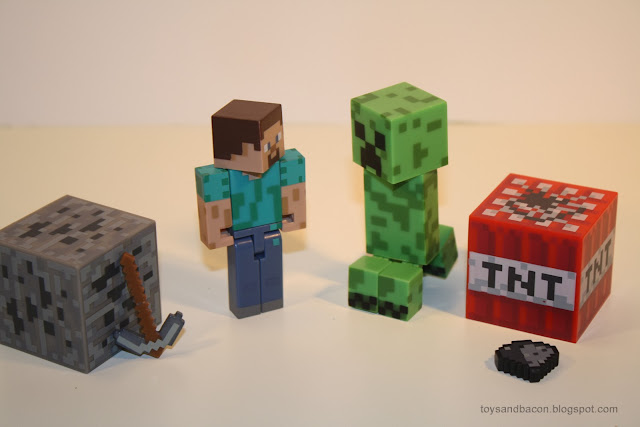 I opened the Creeper and Steve, mostly just to look at the articulation. I also noticed that the bio of Steve had him as "customizable". At first I didn't understand this, but I soon found out you could pull off his head, arms and lower body. Of course, neither of those parts were compatible with the Creeper - even the pegs for the heads are different sizes - but I can see potential here. 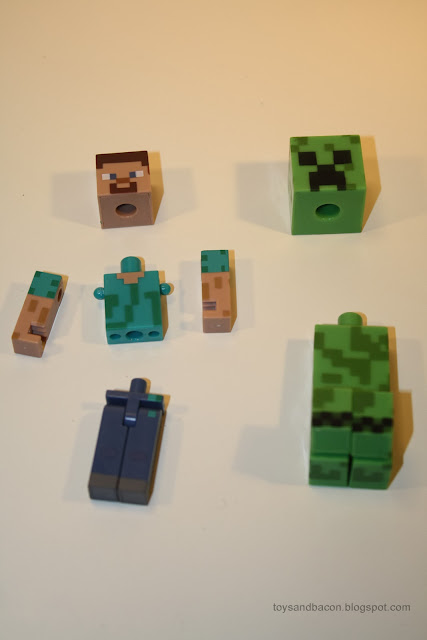 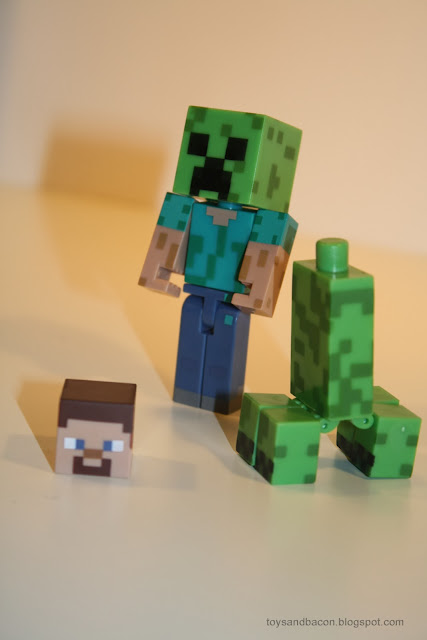 I like these figures. They feel sturdy, and have a certain feel of quality to them. The price wasn't bad either. I have seen them online at around $10, and I'm sure they can be had for less. They characters look close to identical to the game versions. I would even argue that couldn't find an action figure that looks as similar to the source material as these guys. 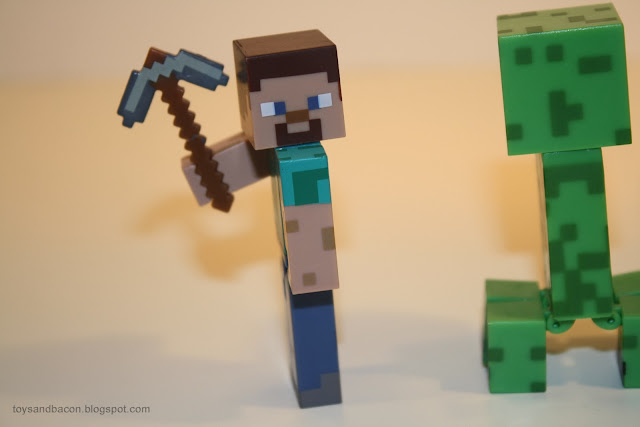 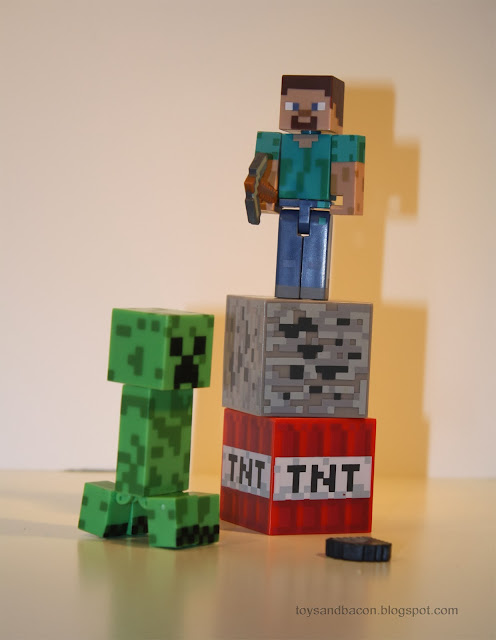 Will these action figures simply drown in the vast ocean that is Minecraft collectibles? I hope not, because I would love to see more like these, and possible even more playsets.
Posted by Jon at 11:23 AM