If you read this, chances are you plan on seeing Thor regardless of your connection to the Marvel universe or superheroes in general. That's a good thing, because with superheroes being mainstream, it's generally easier to be an enthusiast. And the latest movie from Marvel Studios, Thor: The Dark World, is as mainstream as movies get.

Now, we have one well made superhero movie after the other, the last one leading up to the next one. And it's so much fun. These are good times to be comic book enthusiasts. 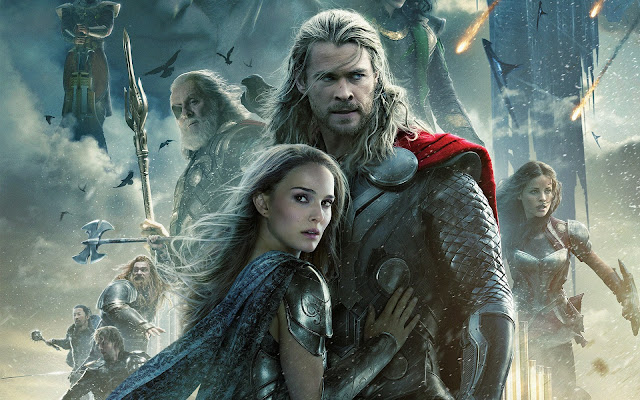 Marvel has it figured out. They know what the fans want, and they know how to deal with the general audience. It's a perfect mix between action, romance, easily comprehensible stories and humor. Mix this with sweet special effects, solid soundtrack and generally great choices of actors, and it's not difficult to understand why these movies are a delight.

These movies stick true to the source material most of the time, and when they deviate, it's usually purposeful. But Marvel Studios has gone beyond just being true to the comics. They are loving it, they are passionate about it. Just think about this: We have seen Robert Downey Jr. dressed up in an Iron Man suit made by Stan Winston studios. We have seen Nick Fury - as played by Samuel L. Jackson, shoot a bazooka at Loki. We have seen Hulk and Thor do battle on the Helicarrier. Thanos, the Mad Titan is in a mainstream movie!

Thor: The Dark World isn't a masterpiece. But no one was expecting it to be. What it is, is extremely fun and entertaining, both for me, and for people who haven't read a single issue of Thor.

For the first time in 5000 years, the nine realms are aligning, being closer to each other than normal. This causes rifts in the worlds, where it's possible to portal from one realm to another.

The Dark Elves, once defeated, are back to seek vengeance over the nine realms, and plan on using the alignment to their advantage. Their leader, Malekith, seeks the essence of evil: The Aether. With it, he plans on sending the universe back into darkness. He doesn't succeed, but there's a lot of collateral damage going on before he's stopped. Both in Asgard and in London.

This time around, we get to see a lot of Asgard, which is really cool. We see tons of cool tech and magic, and it's just amazing. Their boats are shaped like viking ships, and their buildings have laser turrets. It's all very true to the idea of a mix between sci-fi and magic. We also see a lot more to Heimdall, played by Idris Elba. He's become a staple in these kinds of movies now, and I think he likes it.

Loki is locked up in the Asgardian prison early in the movie, but still plays a major role throughout. I like that, I really like Tom Hiddelston playing Loki - and I know I'm not the only one. He looks so fresh in his prison cell, all clean and in his usual outfit, but when Thor tells him to drop the spells, we see him as a wounded and broken man. Of course, Loki never ceases his tricks. I suspect he will play an important role in future Marvel movies as well.

The villains were ok, Malekith is played by Christopher Eccleston, but I'd liked to see a bit more passion from him. His lackey is almost more interesting, a regular Dark Elf that sacrifices himself to become basically the Dark Elf variant of The Hulk.

An important part of the movie is its humor, and it's at times seriously funny. The entire audience is laughing-funny. The funniest moments revolve around the misadventures of Dr. Erik Selvig, the scientist played by Stellan Skarsgård, but several back and forth comments between Thor and his various allies are also great fun.

I'd actually liked a bit more romance, or rather that the romance of Thor and Jane Foster were put on serious trials. But I guess they're saving that for another time. And for those in the audience who are into that kind of stuff: sadly, that first scene of shirtless Thor is the only one in the entire movie.

When all is said and done, I got what I expected. A great superhero movie, excellent entertainment, and I got my daily dose of Marvel. How much Marvel, you say?

Well, skip the break to find out (spoilers)...


The Aether, along with the Tessaract/Cosmic cube, are two "Infinity Gems" in the Marvel movie universe. I think this is the right way to do it. In the comic universe, the Cosmic Cube and the Infinity Gems are two different sets of items, but to keep things simple, they are creating a blend of the powerful cosmic items.

In the comics, the one who has all the Infinity Gems can control pretty much everything: Life and death, time, reality, and so on. Thanos wants to impress Death, and has the idea that killing everyone will get him laid. He is constantly on a quest to gather the infinity gems, and the Marvel superheroes, along with Adam Warlock - who has been seen in the pages of Guardians of the Galaxy - has occasionally stopped him.

In Thor 2, the Asgardians think it's too dangerous to keep them both in Asgard. The first scene after the credits sees Sif and Volstagg deliver the Aether to The Collector - and obscure Avengers villain. He's played by Benicio Del Toro, so expect him to have a major role in a future movie, maybe Guardians of the Galaxy?

We have a lot more Marvel fun ahead of us. And that's a good thing.
Posted by Jon at 3:24 PM

Nice review Jon. Strange that we would get this superhero movie at the beginning of November, but still well worth the watch.

Absolutely strange. Christmas, summer seems to be the obvious choices. I guess Marvel feared the competition during the high seasons. They sure didn't want to go up against The Hobbit, which probably is the biggest movie this holiday.