I've never been a die hard fan of The Simpsons. I mean, like any sane person, I've enjoyed the occasional episode when I stumble upon one, but I have never had the interest of watching entire seasons of the show. But I know there are many fans out there, enough for the upcoming Lego Simpsons sets to be insanely popular. 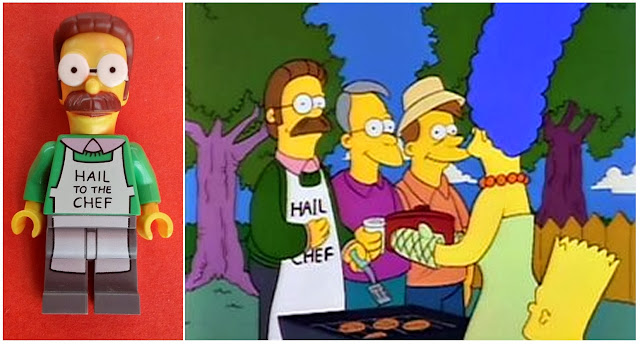 I can't confirm whether that Ned Flanders figure is production. The head looks weird, but we've seen similar oversized heads for instance in the Toy Story Lego series. The body looks like production to me.

Personally, I don't think this works as Lego sets. What sets could they possibly make? The inside of the power plant? The bar? The couch? At least they don't have to change skin colors for the figures. They are already Lego colored.

I will of course keep an eye out for the sets, but I'll pass on them - luckily, I'd say. Lego is sooner than later going to get hold of the building set license for something that really peaks my interest. Macross/Robotech? Starcraft?
They're probably also well underway with producing something like a Lego Galactus, or some other incredible set within the Marvel Superheroes line.

That said, I think it's interesting, and probably a wise move for Lego to do Simpsons sets.
Posted by Jon at 1:16 PM