It should come as no surprise that there are many places to get good food in New York. But it's also no secret that many tourists tend to seek the familiar and safe option. In some cases, I even suspect it's tempting to eat cheap when on holidays. I can understand this, not everyone prioritizes food when they're on trips. And sure enough, you won't have to look long or far for the $1 burger meal in NYC. But it's really nothing to write home about. Literally. We did it a bit differently. Read on for the first of three articles with details on where to eat in New York City. This first one is about breakfast, lunch and brunch. Enjoy!


I guess you can consider this a review of the places we visited, but it should also be apparent that me and my friend had a certain taste. If you follow this blog, you know I like burgers, and did we ever find good burgers in new York!
I have taken very few pictures of the facades of these places, but every one of them are easily found through a google search.I also rarely take photos of interior, because honestly, I think it's a bit rude. That said, I'll talk a bit about location and design when it feels relevant.


Everyone eats their breakfast out in New York, and you can't really expect your hotel to have a good breakfast. There are exceptions, which I'll get back to. Our hotel had something they called breakfast, but it wasn't interesting enough for us to try.
We ended up being extremely lazy when it came to the breakfast, mostly due to the location. A bit more adventurous when it came to our lunches, we visited a new place every day. Some of them were worth a mention in this article.


Over at 51st and 3rd, just a short walk from our hotel, we found or preferred breakfast. Treehouse looked like it focused on breakfast takeaway and coffee. It wasn't spectacular, but it was good and consistent. They had a wide selection of customizable breakfast sandwiches, pancakes and salads. A clean place that felt relatively modern. Combine this with a small selection of "locally" produced products, and you had a moderately "hip" place. As it would turn out, by far the most trendy place we visited. At around 10am Treehouse was fairly crowded, and it seemed to be a place for locals to pick up their breakfast on their way to work. But the food came fast enough, and we always found a place to sit, upstairs. They held open until midnight, and prices for a breakfast sandwich and a cappuccino was around $10. 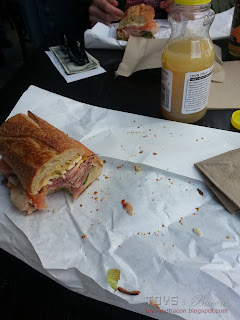 This one we stumbled upon, while on our way from a coffee place. As the blood sugar fell, we quickly asked the guys who ran the coffee place where we could get lunch. They recommended this place that looked like a green grocer, but also functioned as a bar and lunch place. Foragers was located at 22nd and 8th.

It was actually a bit surprising, because we had already seen an impressive food market inside Grand Central, as well as the Chelsea Market, but Foragers had more than enough. Dedicated to local and fresh products, this felt like the place for a cool and rich person to get their ingredients.

I ordered a large ham and mustard baguette (you see half of it in the picture), as well as a fantastic locally produced lemonade. Baguette was tasty enough, but I was starving at this point, and would have devoured anything.

At $15, I would consider this an expensive lunch. But then again, we were in Chelsea.

Sunday brunch at The Dutch 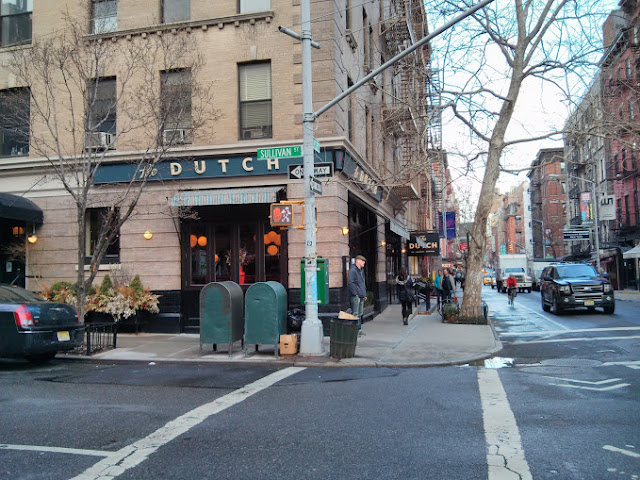 The Dutch ended up being our favorite place for any meal, and their brunch was no exception. Eat at this place when you visit New York.

Brunch is apparently a thing in New York, and Sunday brunch is a big deal. We considered the $100 Sunday brunch over at Waldorf Astoria just for the experience, and in some ways, I regret not going. In other ways, I absolutely appreciated the brunch over at The Dutch. A cosy oyster bar Located on the corner between Prince's st and Sullivan st, near the heart of Soho, the location was nothing to complain about. And the brunch was spectacular. 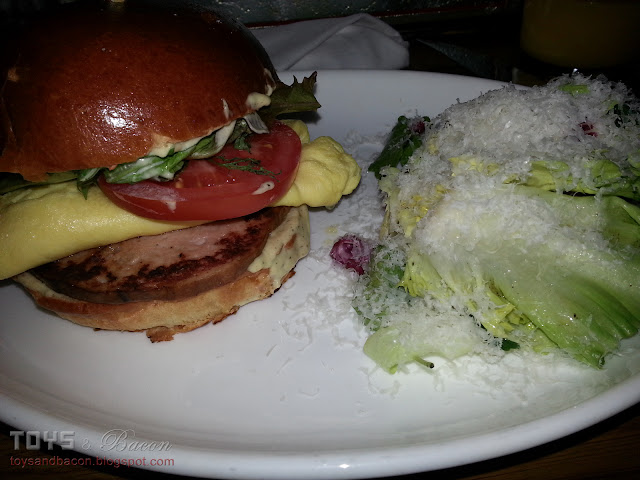 I ordered a breakfast burger, which included omelet and sausage. Salad with parmesan on the side. My friend had baked eggs and beans. This meal was easily one of my favorites for this trip to New York, and I suspect my friend will agree.

We came in around 11am, and it was already filled with people. There was a good vibe to this place, and it was obvious that people were enjoying themselves. Even after five meals at this place, I regret that we didn't visit more times. For this Sunday brunch, we had to sit at the bar, without it really hindering the experience. Be early, or make a reservation. The brunches came in at around $20. 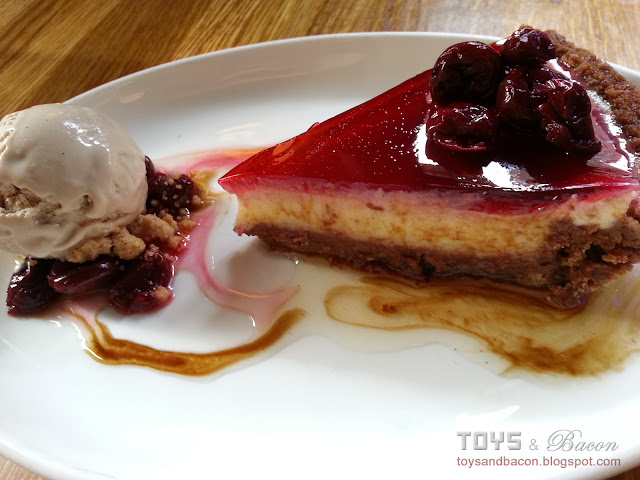 After brunch, it's time for pie. Interestingly enough, the waiters had to specify that this was dessert pie, and not pizza. The Dutch was rumored to make great pies, and I guess many instantly think pie means pizza. This was no pizza, but buttermilk and cherry pie, with ice cream. Delicious. 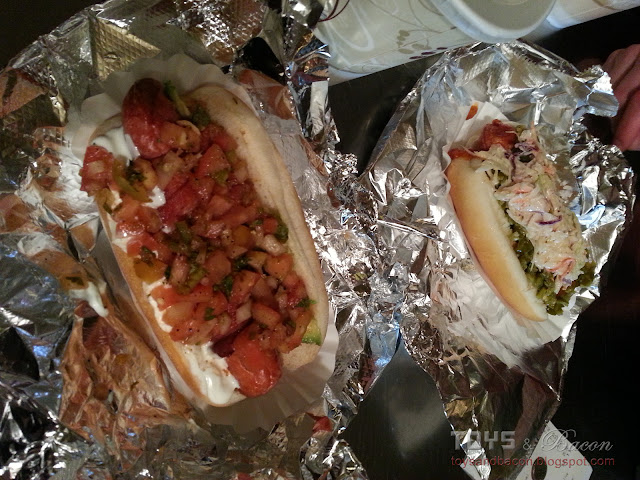 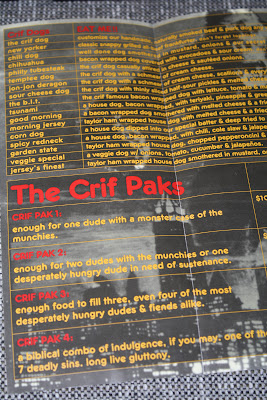 You can't leave New York without eating a proper New York hot dog. Crif Dogs was located in the East Village, more specifically St Marks' street, between 1st avenue and Tompkins Square Park. A fantastically unpretentious place, it was just a place that served hot dogs. The interior was worn down, and the people that worked there could at best be labeled as "alternative".Still, I won't argue their technique or dedication when it came to making great hot dogs. This was one of those places you'd want to make an effort to visit.

I had the "Chihuahua", which was the in-house dog with avocado and sour cream. Chili was optional, but recommended. My buddy got the "Spicy Red Neck", which was a bacon wrapped dog with coleslaw, chili and jalapenos. The menu also gave you the option of customizing the dog to your specific requirements.

A dog was somewhere between $3 and $6. Advice: Order two right away. Or maybe you and your party should indulge in the biblical combo of gluttony called "Crif Pak 4"?

It seems the East Village was the place to be if you wanted an international flavor to your meal. We saw several Indian, Thai, Greek and Vietnamese places. I saw a Ukrainian restaurant, and I'm sure if I looked more closely, I'd see a bar or restaurant for any country. Caracas Arepa Bar was  located parallel to Crif Dogs, in 7st. There was a definite "East Village feel" to this place. Random, worn down, enthusiastic and increasingly popular. 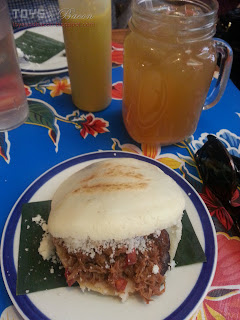 A surprise to us, as we had no plans of eating at a Venezuelan lunch bar, but after talking with some locals, we ended up outside Caracas Arepa Bar. I say outside, because we actually had to wait for a table. The tiny place was filled with people, and Caracas was popular to the point where they had one store front for takeaway and one place with tables. We eventually got seats and was impressed with how deliciously homely this place was. Quite the opposite from the clean Treehouse with the high ceiling, definitely opposite from the extremely hip Foragers in Chelsea. This was just a local bar where they made arepas.

The walls were decorated with religious plastic trinkets and the brick walls contrasted the hideous table covers. But the food was great, and something outside the ordinary.

Arepa is a bread filled with leftovers, and it made me realize that every culture traditionally has this meal in one way or the other. Home made lemonade and a bowl of fried vegetables closed out this great lunch. Roughly $12. 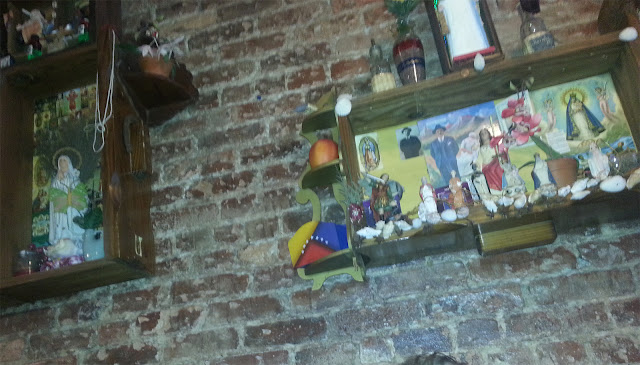 Finally, I'll share a few pictures from the food market inside Grand Central Station. A  long corridor filled with vendors of different sorts. It did feel a bit like this was made for the tourists, and not necessarily for a practical place for buying high quality ingredients. We got the same feeling feeling from Chelsea Food Market, over in Chelsea District (right opposite Google's HQ). But I still ended up taking a few pictures, so I can't have been that unimpressed. 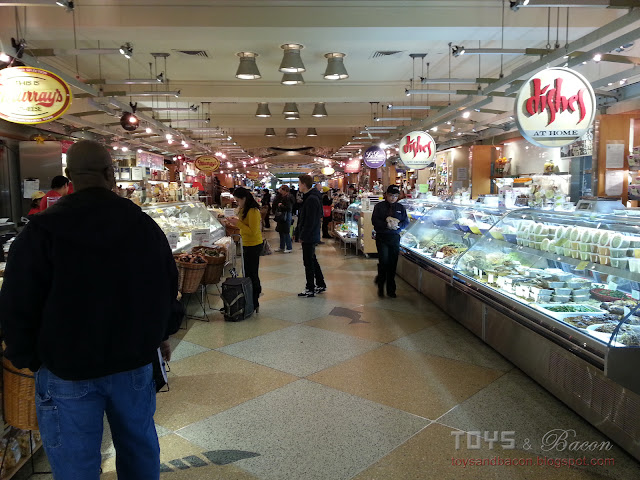 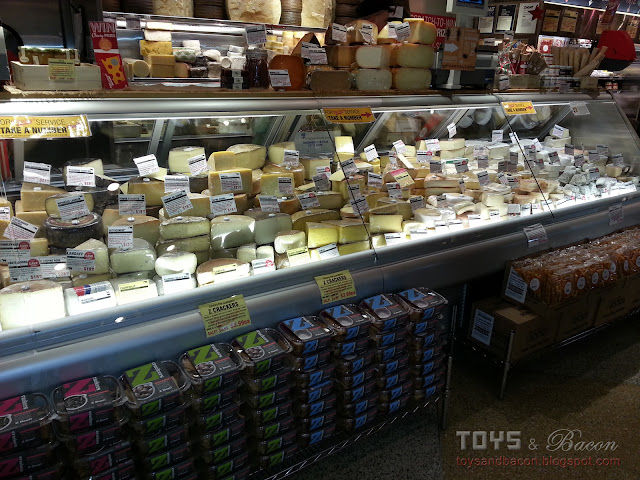 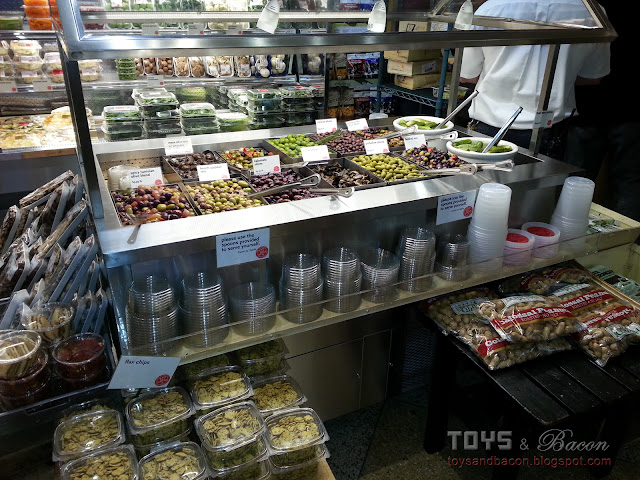 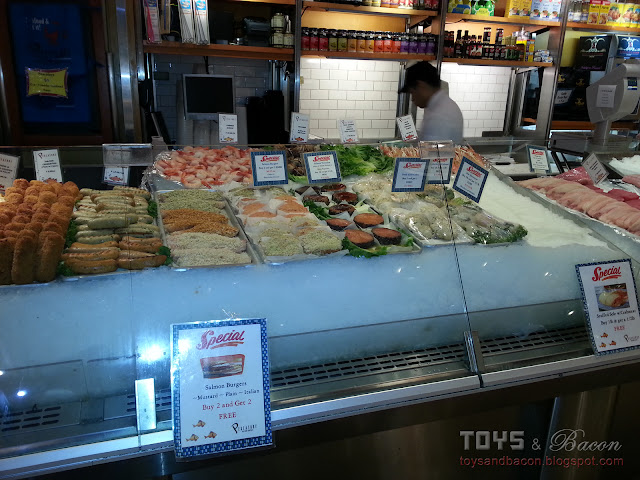 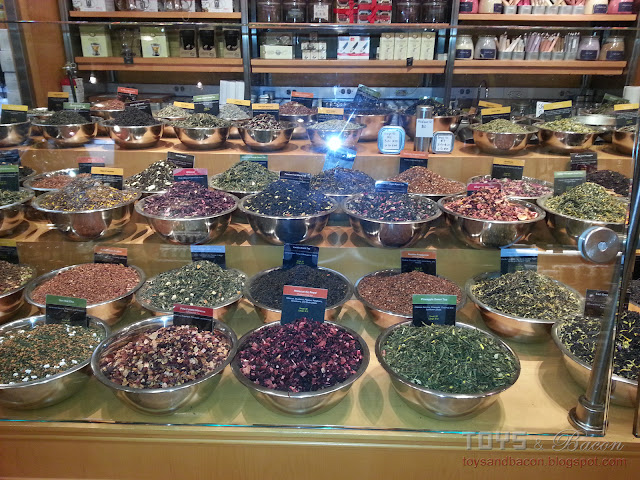 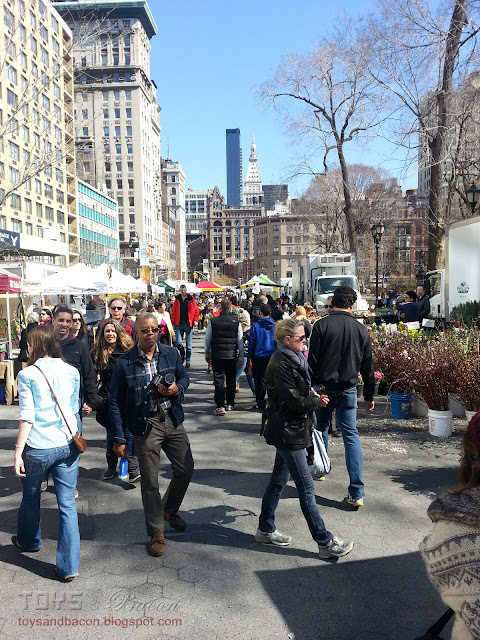 That last picture from the open air market near Union Square. This was a Saturday, and I suspect it's a weekend thing. What looked to be fresh products, this was an alternative to the extremely crowded, and probably overpriced Grand Central Market and Chelsea Food Market.
I'll be back tomorrow(!) with a shorter one about a few coffee places we visited, and then next week I'll round up with the article on where to eat dinner in New York.
Posted by Jon at 11:02 AM