Even more Masters of the Universe Artwork

It's the not first time I've talked about artwork, and it won't be the last. I've mentioned in the past that the artwork was one of the best - if not the best aspect of the Masters of the Universe toy line from the 80s.

Today I'll share what was quite possibly the coolest pieces of art to a kid. I spent hours looking at posters like these, whether they were of MOTU, Transformers or G.I. Joe. 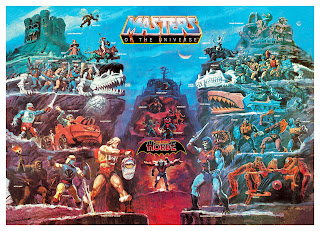 The group pictures. I loved these kinds of pictures back in the day. I still do. Click in to read more.

Today I also see them as brilliant marketing. They could just as well have added slots to cross out the figures we had, similar to the current Lego collectible Minifigures, who all come with checklists of the current wave of figures.

Of course, the illustrations I'm showing today had qualities far beyond simple checklists. The amazing details, the depth of the images, the way the characters are opposing each other. Even today, I find them extremely cool, so imagine how these pictures came across to a starry eyed 8 year old collector with vivid imagination.

All these pieces are done by artist William George. He did several other illustrations for the MOTU toy line. These are all fairly large, and I encourage you to save them on your computer and zoom in as much as possible, to get all the cool details. Then, of course, come back here and read my comments. 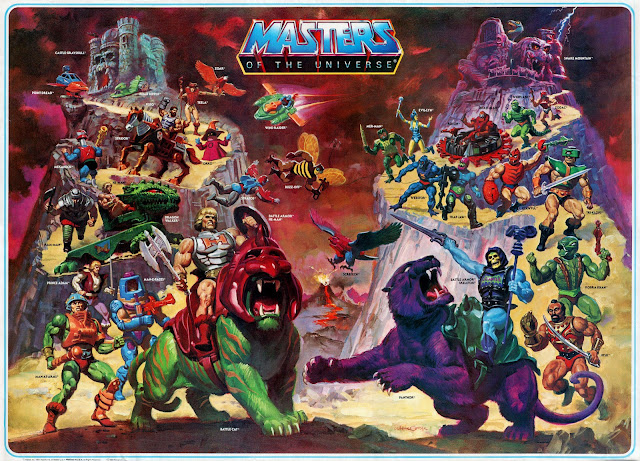 The first up is from what appears to be the third year of the line, 1984. This was the first time we saw variants of the two main characters, He-Man and Skeletor. Now, both wearing "Battle Armor". The two new evil warriors, Jitsu and Kobra Khan are both in the foreground, but I find it a bit surprising that their counterparts, Fisto and Buzz-Off are somewhat hidden in the background.  Notice that the regular He-Man is riding the ridiculous Dragon Walker, and is thus pictured twice in this image. Regular Skeletor is absent. Also notice the pilot of the Wind Raider. He was an unnamed character up until recently, when they made something that could pass for a Wind Raider pilot in the Classics line. 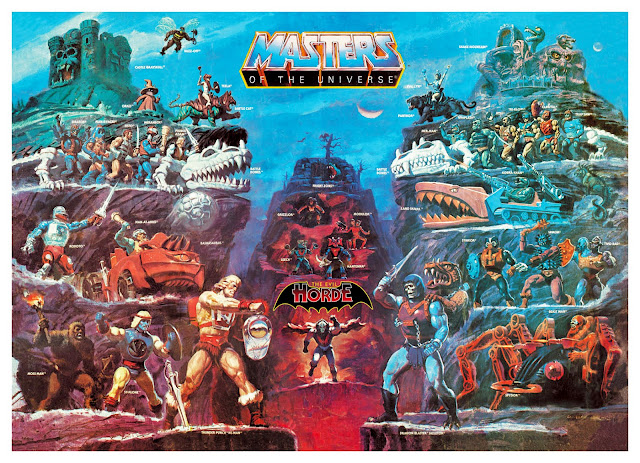 This is from the fourth year of the line (1985), and we see the second variants of the main characters: Thunder Punch He-Man and Dragon-Blast Skeletor. This was my favorite version of He-Man throughout the line. The inclusion of the Horde faction is relevant here, with Hordak in the foreground, and his minions behind him. Their lair, The Fright Zone way up, in the back. This time, most of the new characters are placed in the front. Roboto, Moss-Man, Sy-Klone for the heroic warriors and Spikor, Stinkor and Two-Bad for the evil warriors.  Previous figures have all been placed in Battle Bones, the skeletal dragon who also functioned as a carrying case. Awesome. 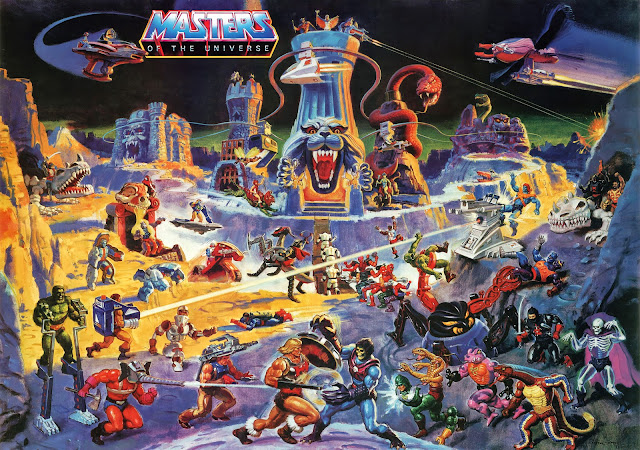 This one is a bit different. Gone are the names of the characters. There's also a question when this is from. We mainly see 1986 characters, but there's a few from 1987 as well. Terror Claws Skeletor and Flying Fists He-Man are of course fronting this illustration, both from 1986. We also see a couple of new heroic warriors in Snout Spout, Rio Blast and Extendar. The Snake Men was the fourth faction in the line, with Rattlor, Tounge Lashor and their leader King Hsss. Most of the vehicles here are from '86 as well. Of course once again we see a pair of Battle Bones.
Scare Glow and Ninjor to the far right were both 1987 figures, as was the mighty palace Eternia in the back. But several of the '87 characters are missing: Snake Face, Blast Attack, Twistoid, Sorceress, King Randor. We see someone climbing up to Eternia in the back that very well could be Clamp Champ, a 1987 charcter, and a toy I loved back in the day. The only black character in the line, and one I'm looking forward to being made into a Classics toy. 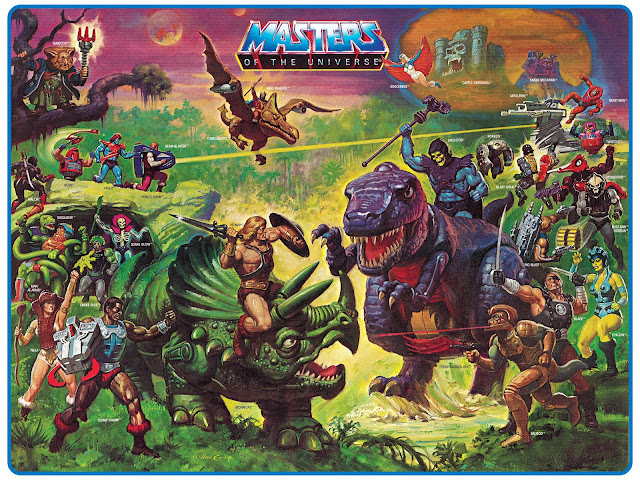 Finally, from the twilight of the toy line, the 1987 line up of figures. Some of these were incredibly hard to come by. In particular the dinosaurs. I had many of these figures back in the day: Saurod, Twistoid, Scare Glow, Snake Face, Squeeeze, Gwildor, and of course Clamp Champ. It's a bit difficult for me to look at this illustration, because of what it represents. On one hand it's characters I loved, toys I played a lot with. On the other hand, it's filled with toys that I foolishly ended up selling during my rebellious teens. But maybe what conflicts me the most is that Masters of the Universe had such potential, and like so many great toy lines, it's cancelled too early. At the same time, had Mattel dragged it out, we may have seen more re-use of ideas, or even bad ideas, and possibility of the the line going completely stale, leaving a lesser legacy than the one we actually got.

Either way, cool illustrations. Check back for more toy talk next week!
Posted by Jon at 12:18 PM