What about Playmobil's Future Planet? (part 1 of 2)

Well, what about it? Am I being unfair for neglecting this fantastic sub-line of these amazingly well-made toys?

Truth is... Yes. But then again, I don't collect Playmobil. Maybe I should, when I look at the quality of the sets. But as I've said before, I don't actually buy a lot of toys these days. It's limited to Lego Minifigures, the occasional Lego set, the MOTUCs (which I have an apparent love/hate relation to), and my summer splurges on big robots or sealed vintage G.I. Joe vehicles. I'm an enthusiast, yes. But I'm just not merely a toy collector. I have several other interests as well, some that even take precedence over the toy collecting.

So yes, sadly I have neglected Playmobil's Future Planet.
I instantly fell in love with this sub-line when I saw the sets in the shelves, but I didn't make the jump until I saw a set at a massive price reduction. This article is mostly thoughts, and pictures of the boxed set, I'll get to the opened product at a later point. 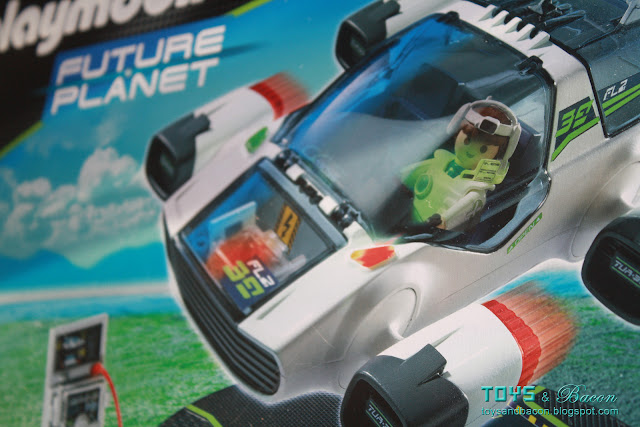 And you can make the jump into this article to read more.

A few weeks ago, I mentioned Dino Riders as a severely underrated action figure toy line. But is it really underrated when close to every toy collector these days remember it fondly. I guess it was just that kind of toy line, that most people actually loved, but it didn't leave a lasting impression due to lacking media output. I mean, for all the awesome Transformers toys that have been made, Optimus Prime and Megatron would probably not be household names had it not been for the extremely popular cartoon.

This isn't exactly the problem with Playmobil, because like Lego, the sets are fully capable of standing on their own, without any connection to media. I do think that Playmobil would have benefited from a connection to a movie, game or cartoon. But then you get to the actual problem with these toys: The figures. I guess you could say that the Lego Minifigure looks a bit silly, but it's nothing compared to the Playmobil ones. The figures look lame. They do, there's no way of getting around it. And the discrepancy between the design of the figure and the design of the car in this situation is ridiculous. Maybe Playmobil should have done as Lego, and started giving their figures specific facial expressions? 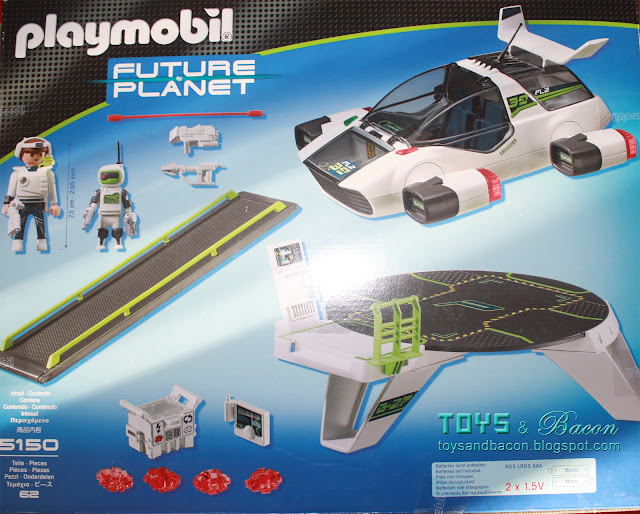 Future Planet is a theme I can get behind, because it didn't feel as "childish" as the other Playmobil sets. That's not as weird as it sounds, because while I know some of the toys I write about actually are made for kids, there has been a fairly apparent pedagogic element to most of Playmobil's sets.They are historic sets, you can get farm sets, school, police, hospital, zoo and so on. I have written about the fishing boat Susanne in the past. The sets are non-violent, completely harmless, and to a certain extent relatively accurate when it came to detail and execution. This was never the case with Lego.

I'm in complete love with the idea of space exploration, terraforming, the search for habitable planets. Pair this with a passion for vintage sci-fi designs, and Future Planet was an obvious winner. Based on the 8 sets, it looks to be good guys against bad guys. I have found out the good guys are called "E-Rangers" while the villains are the "Dark Rangers". Why make it any more complicated? 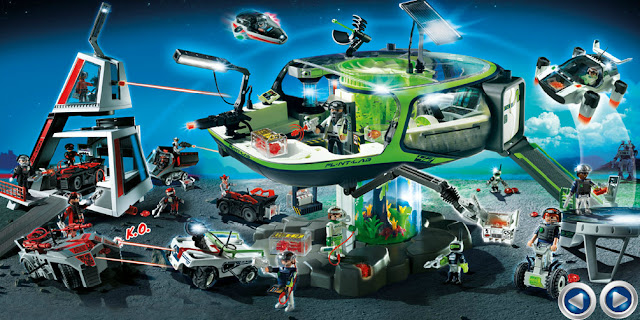 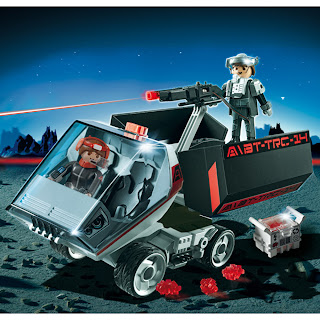 Both factions have a base with a battery-powered laser as play feature - "IR-Knockout cannons". There are also light up features to the bigger sets. The E-rangers have a mech that is remarkably similar to the Power loader from Aliens, and the Dark Rangers have a truck that leads your thoughts to M.A.S.K and the Imperial Shuttles of Star Wars. It's ridiculous and awesome. Just as we like it.

Now, these toys are not the cheapest of toys, but I'd argue that you get more quality for your money than with several other toy lines. Working play features, sturdy plastic, high quality sculpting and precise paint jobs.

It's just... The way they are presented combined with the way the figures look, they just don't feel "collectable". Why is it that I'd have no problem putting a Lego set inside a glass cabinet, but it would feel weird if I did the same with Playmobil?

I can't answer, and honestly I shouldn't care. But I'll wait with opening this set to after Easter.

Now, to the set itself. The main part of the "5150 - E-rangers Turbojet (with launch pad)" is the car. The Turbojet car features several parts of translucent plastic and rotating booster rockets. Both the hood and the trunk will open for storage, as will the canopy in the cockpit. As a real party trick, the car will light up if you put batteries in it. Judging by the pictures on the box, the booster rockets will glow, as well as lights on the hood. I like that.

The set also includes a really gorgeous launch pad and a ramp leading up to the platform. All in white, dark grey and delicious like green. I believe the ramp will connect to the e-rangers base as well.

I guess the the problem on the "future planet" is exactly the same as with the present planet: Lack of resources, and more specifically lack of energy. The 5150 set also includes four translucent red energy crystals (I'm guessing they're energy), and a compartment to store the crystals. I love this. It's simple and awesome. As a kid I was all over translucent plastic, even though I've learned the hard way that it's inferior to opaque plastic, and will break faster. I doubt this is the case with these crystals though.

Finally, the set includes a Playmobil dude and a robot drone. I don't mind the dude. He does look like a Playmobil dude, what what did we really expect? He has a blank stare and a tiny smile, just as the fisherman on Susanne. That's reassuring: Humans look more or less the same in the future.

The robot is significantly cooler. He has circuitry on his chest, clawed hands for picking up energy crystals, and a cute little antenna for keeping contact with home base. 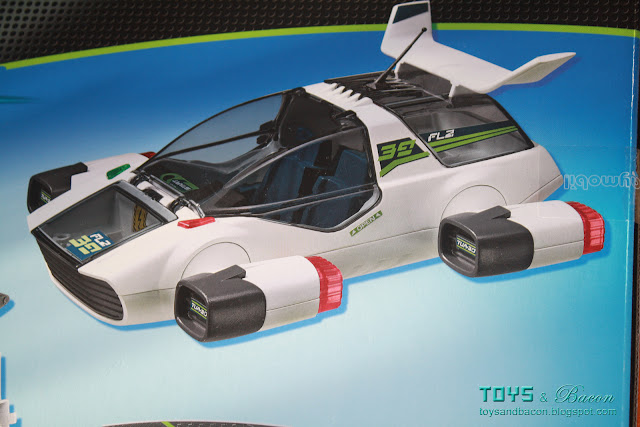 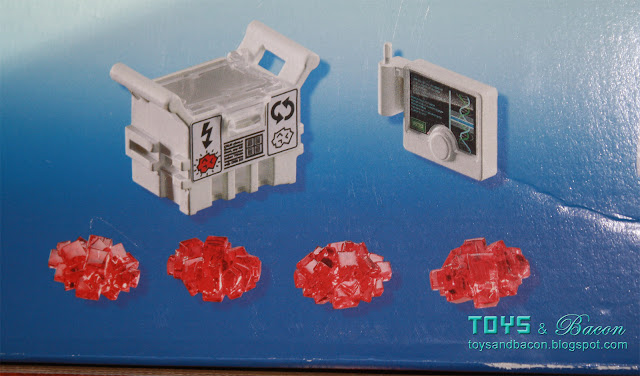 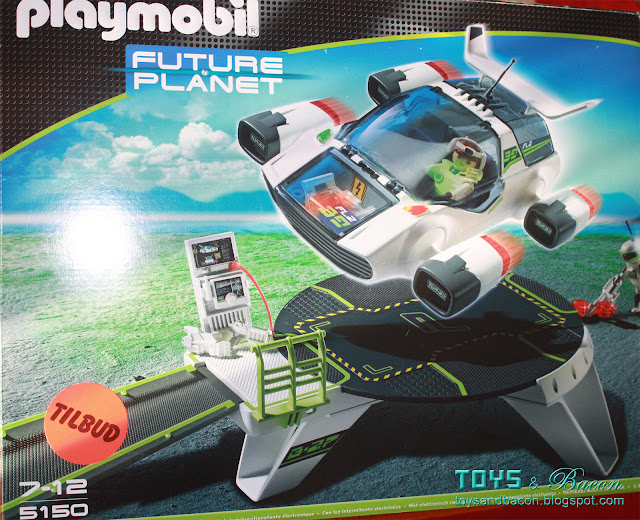 Ideally.. In a perfect world, these Future Planet sets would have come with slightly more realistic looking action figures, and a cartoon. But then again, it is a small sub-line from Playmobil, a toy maker that clearly don't make toys for collectors...

No toy collectors are interested in Playmobil, are they?


No one cares about the silly figures, do they?

Well, then surely no one collects Playmobil on a large scale...? 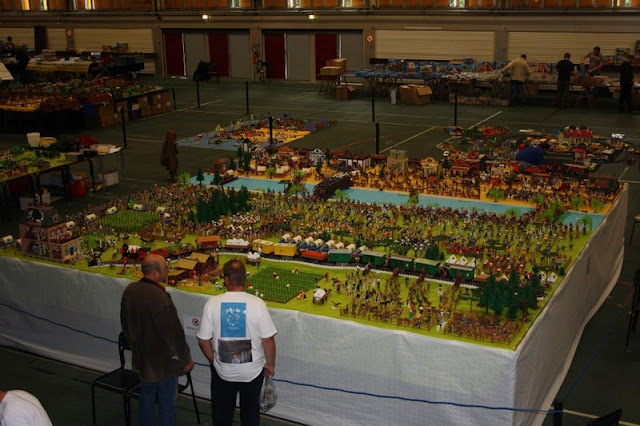 Ok.. It seems I may be wrong. Maybe there is room for the Turbojet car in my glass cabinet? I'll make the call when I open it, so stay tuned for the second part.
Posted by Jon at 10:09 AM

that is a huge set up of playmobile stuff. I have always liked what they do a bit, just not enough to buy any of it.