Figure Friday: The State of MOTUC

Some background may be necessary for this article, and I'll make it brief, but just skip a few paragraphs if you know very well what MOTUC is.

Masters of the Universe Classics (MOTUC) is the updated, modern version of the 80s toy line Masters of the Universe. I've written about MOTUCs many times in the past, for instance with the Top 10 MOTUCs.
The deal with the Classics toy line was clear from the start: it would include not only the vintage characters from MOTU, but also those from She-Ra, New Adventures of He-Man, the 2001 Cartoon, and - as it turned out - any character remotely connected to the He-Man universe.

Most collectors of this line are first and foremost fans of the MOTU line, and collect MOTUCs as nostalgia. Like me. I have over the last few years also come to appreciate the other characters as well, but I need to make it clear, it's absolutely about the original MOTU characters.

The only way to get these figures is through Mattel's online shop, Mattycollector. The figures are released once a month, and can be bought at the day of sale (usually the 15th), or through a yearly subscription. The subscription is weird in that you sign up knowing barely 40% of the figures you're getting, basically putting your money in something you haven't even seen yet.

Scott "Toyguru" Neitlich is the brand manager over at Mattycollector. He is a fan himself, and has done an admirable job with the line. But at the same time, he shows clear narcissistic tendencies. He has been constantly selling himself and his own creations (characters, comics and character bios), which truthfully have been mediocre. Toyguru also has the ability to completely disregard the intelligence of his customers (which ironically I will do too, later in this article). The otherwise great figure, Stinkor, came with misplaced arms. Instead of admitting their mistake, Toyguru adamantly claimed it was intentional. No one bought the lie.

This year at San Diego Comic Con, we were shown the last of the original, heroic Masters, Ram Man. What looks to be a monumental figure could also mark the end of the line. Because at this point, why would the casual collectors bother to get anything else? We also saw a few other popular characters, like Mosquitor (December 2012) and  Jitsu (February 2013).

As usual this time of the year, Mattel - or rather Toyguru is trying to scare us into getting the Masters of the Universe Classics subscription. We need to sign on for the entire year as soon as possible, or the line will be cancelled. This is the rhetoric he's used pretty much ever since the line started, and it's becoming harder and harder for him to say this in a convincing manner.

Let me show a typical example of his way of "scaring" us into  purchasing the subscription:
http://www.poeghostal.com/2012/07/motuc-2013-sub-in-jeopardy.html

Toyguru says straight out "Until we sell enough, the line is on the block. We need sub support to continue it."
Poe Ghostal makes a few points that I'm sure many fans will agree with. At this point, we only need a handful of figures to complete our "vintage" set of Masters, and we're reluctantly signing up to pay $700 for a bunch of figures we really don't want.
Toyguru knows this, but instead of making the 2013 subscription even more attractive, he's still using this weird tactic of holding the line hostage if we don't buy enough.


Here's what has happened with the subscription.

- Numbers of figures are down. No longer do we have quarterly variants in addition to the larger scaled releases. We get 12 monthly releases and additional 4 slots at different price points. On top of this comes the 2013 subscription specific figure, which unlike 2012 fantastic Shadow Weaver is a completely uninteresting figure in King He-Man.
- Subscribers are also treated to a map, the fourth so far. Keep in mind, King He-Man and the map are not by any means "free", as subscribers pay a subscription fee of $25.
- Price is up, from $20 per figure to $25. Day of sale, outside of the sub, figures will be $27.
- A sticker sheet is included
- Subscribers can vote for the November slot, from eight possible character choices. 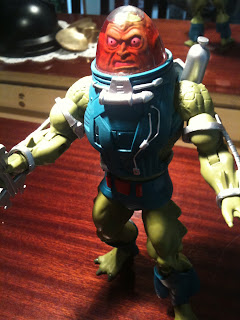 And that's it.
If Toyguru was afraid of the amount of subscribers dwindling, wouldn't it make sense to make the subscription even more attractive? I like the decreased amount of releases, it makes for less boring releases (Snake Man-at-Arms, Battleground Teela). Hopefully this will mean a more focused line-up.
The sticker sheet is a neat idea. More of this! It costs probably close to nothing to make stickers for Mattel. Trow in stuff like that to the subscribers every month!
The voting of the November slot is brilliant, but leaving such an important choice up to the fans is also dangerous, and half of the choices was repaints of characters we already have. Repaints are boring, and most fans are surprisingly stupid. I fear I'll end up with another repaint.
Toyguru brags about including a minicomic (which he wrote himself). This is ok, but I'll assume it's fairly expensive to make. How about some random goodies instead? Instead of a sloppily written comic book that completely alters the canon we already love, I'd like a MOTUC pen. Or a keychain with Scare Glow in  it. Or a button. Or a hat pin. Or a USB stick shaped as the Power Sword. Want to make USB stick even more special, include digital copies of the comic you're so proud of writing. Fans love stuff like this, and it costs close to nothing to include.
I'm most likely in for a sub this year as well. I just haven't signed up yet. I'm looking forward to more than Ram Man. Most of the late 80s figures are still at large:
Clamp Champ, Ninjor, Extendar, Mantenna, Dragstor, Squeeeze, Twistoid, Rotar, Snake Face, Rokkon, Stonedar, Gwildor, Saurod, Blade. We still have many MOTU characters to anticipate, but neither of these are important characters, and neither of them will sell an entire subscription, like Ram Man hopefully could.
I also love the New Adventures  characters (like Slush Head above), and I'm looking forward to Flogg, Hydron and the NA versions of He-Man and Skeletor. I certainly don't mind the Princess of Power characters (She-Ra's friends), and I honestly can't wait for Glimmer, Angella and Sea Hawk.
But at the same time, I'm reluctant, because with the expected, but annoying price increase, I'm at the point where I think the quality should be significantly better. No loose joints, no paint defects, no misplaced parts. I doubt this will happen, but we'll see.
Toyguru managed to call the line "high end", and I'm baffled.  Hot Toys are high end. Bandai's Soul of Chogokin is high end. Takaras Masterpice Transformers are high end... almost.
But make no mistake about it: Masters of the Universe Classics, despite their borderline ridiculous price, are NOT high end.
I'm sure Toyguru will get the subscribers he hope for, or he will simply have to lower his expectations. We will see a full 2013 of MOTUCs.
But will we see a 2014?

Email ThisBlogThis!Share to TwitterShare to FacebookShare to Pinterest
Labels: motuc