Dan and Roxi sent me a Christmas package, that arrived today, only 7 months after Christmas. You might have read about Dan and Roxi before in this blog here and here. The package was filled with awesome, and a lot of it was relevant for my blog. But what really caught my attention was two tiny figurines made by lead, I believe... 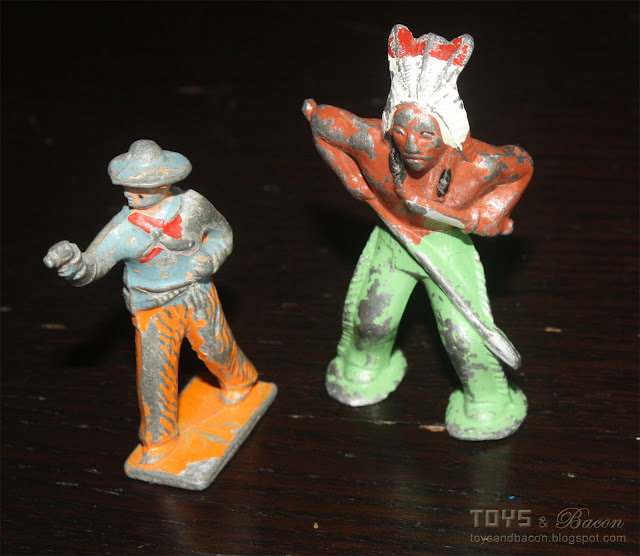 A cowboy and an Indian. Roughly 2 inch scale, the Indian is slightly bigger than the cowboy. They have seen a lot of play and both have heavy paint wear, but that only makes them cooler. These figurines are from the 30s, made by a company called Lincoln Logs. My research has it as a company that initially made small logs for children, that could be assembled into houses and forts. Some of the sets also came with these lead figurines. As soon as plastic became the most accessible material to use in toys, Lincoln Logs stopped using lead. Which is probably a good thing since lead is extremely lethal! Kids were literally dying just from me writing about lead toys.
(Seriously though, lead poisoning is no joke, but overly-protective parents are...)

These two figurines are gorgeous. Not necessarily aesthetically, but definitely historically. Dan claims they were made using old musket balls, which I doubt. But they are definitely relics from a simpler time, when kids were more than happy with tiny wooden logs, and static figurines made of poisonous metal. And think of it, a kid in the 1930s actually played with these...

Dan doesn't claim that, it is just the story the old lady selling them had.