I'm usually in a mood for robots in the summer. I can't explain why, but the toy of choice during the summer are robots. Sure, I've mentioned that anything from building big Lego sets to assembling G.I. Joe vehicles are great summer activities. But this is a more general feeling I get during the summer, the urge to play with Transformers, the splurge when I buy a big, vintage robot toy, or just writing about them. You've seen quite the concentration of robot-related articles lately, right? Well, today is no exception, as I write a short one about Transformers Targetmaster Sureshot. 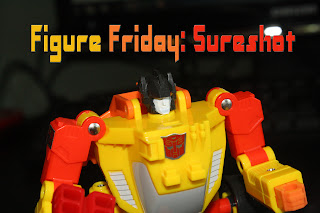 Back in the 80s, the Transformers was the toy line with the least amount of gimmicks. The very first vehicle in the G.I. Joe line was a battery driven tank. The entire Masters of the Universe line was filled with gimmicks and interesting play features from the very start. More obscure toy lines like M.A.S.K., StarCom, and Dino-Riders were all based around a gimmick.

And this was the case, to a certain extent with the Transformers. After all, they too were toys where the play feature was prominent, to the point where it was mentioned in the very name of the toy line.

And this was also the feature that separated the Transformers from, let's say M.A.S.K. The Transformers wouldn't have made sense without their play feature, it was that important. They would just have been cars, planes and cassette players. Or non-transforming robots.
M.A.S.K., for those that don't know, was a mix between G.I. Joe and Transformers. Heroes against a gang of villains, all driving vehicles that would transform into battle stations of various peculiar designs. The gimmick was of course the transformation of the vehicles. The premise of M.A.S.K. would still be viable without this gimmick, as it would have been humans with cool masks in cool cars in battle with each other.

Now, like all toy lines, after a while, the play features frequent increasingly more over the course of time. Case in point, the last years of G.I. Joe, where we saw color changing, transforming, mechanical robots, aliens and ninjas with action features. It was horrible. 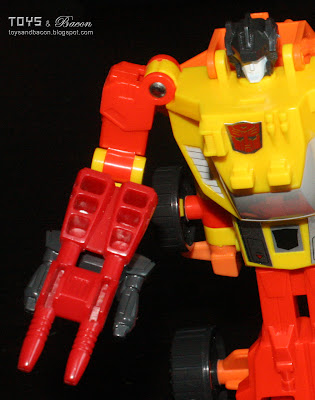 Transformers had similar development, with sparks flying, color changing, and so on. Pretenders, Micro Transformers, Headmasters, Powermasters all come to mind. But for a surprisingly long time (like two years at least), the line was sort of gimmick-less.

Sure, there were a few single robots that came with unusual features, like Omega Supreme and Twintwist/Topspin from 85 and Sky Lynx in 86. I also reluctantly mention the triple changers and combiners, but here, the very premise of their "gimmick" was still based on Transformation.
So apart from the occasional spring loaded missile, the first gimmick, as far as I see it, was the Targetmasters. It was a sub line where each big robot came with a tiny robot that would transform into a gun. The gun would then obviously fit in the big robot's hand.

Sureshot here was in the first wave of Targetmasters. It should be apparent by the colors of his emblem, as well as the colors on the entire robot that he's an Autobot. The gun in his hand transforms into a tiny dude, named Spoilsport. Sureshot transforms into a car, something that looks to be a mix between a buggy and a racing car. 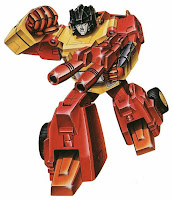 1987 also saw the introduction of the Headmasters, which I have mentioned a couple of times before. This Japanese art from 1987 shows the Headmasters and a small handful of Targetmasters in all their glory.

There isn't really a whole lot to say about Sureshot, but I'll admit I like the chunky feel of the old Transformers. If you compare him to let's say Mirage, he's painfully outdated, in terms of articulation and how interesting the transformation is. It's an unfair comparison, as Mirage is one of the best modern Transformers, and - let's be honest - Sureshot is no Jetfire... 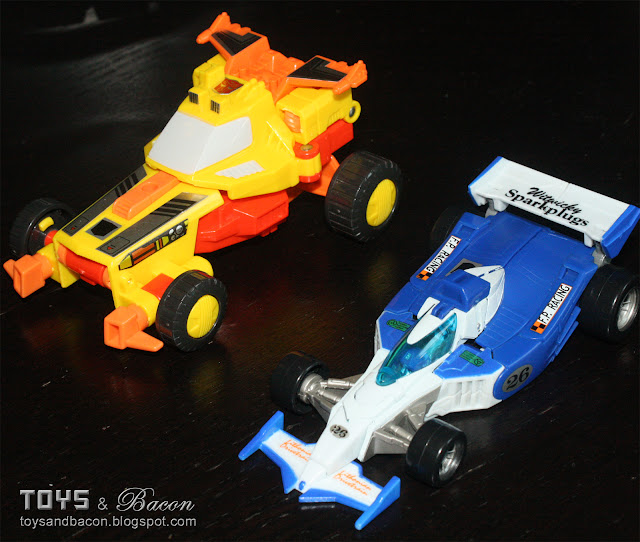 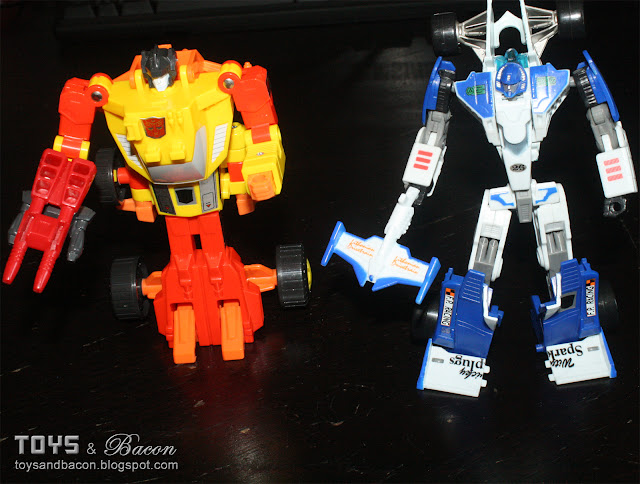 But I still like him. He feels solid, and the play feature is simple, yet effective. It's a tiny gun that with one move changes into something that resembles a person. He has a neat combination of colors and a cool name. There's nothing to not like here. I have his two original Targetmaster buddies Crosshairs and Pointblank somewhere too, and they do make a neat display together, which I will of course get to in the future... Next summer? 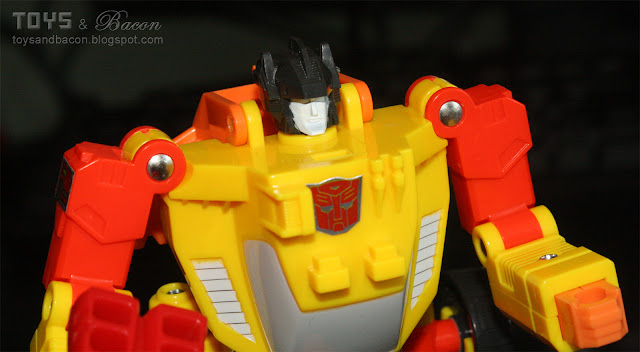