No internet, no kitchen, all toys packed in boxes. It's not sad, but it is a bit annoying. I'm not sure when I'm back with the regular schedule, but I can assure you I have some cool stuff on the way, both when it comes to displaying action figures, and recipes. 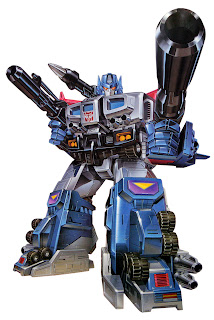 Today, I'll share some more Transformers box art, mostly from Japanese releases. So step in for the robots! The box art is important.

At least it felt that way back in the day. The image on the box stuck with you as the perceived way your toy looked. Of course, you all know the way Transformers G1 looks, they're immobile box-shaped things, barely resembling anything - at least in robot mode.

Take Power Master Optimus Prime for instance.When he was sold, he came with magnificent art, to make him cool... and able to bend his elbows. And move his feet. And turn his head. The first image is of Super God Ginrai, or something. It's the Japanese variant with additional stuff to make Prime bigger. And here to the left is the European art. Still cool, but I always preferred the Japanese box art for some reason. The image is borrowed from http://www.botchthecrab.com/ . Botch has a great website, compiling almost every Transformers box art.


Have a good weekend, people!