A Different, but Similar Perspective on Nostalgia

Every once in a while, I go on various quasi-philosophical rants. I guess it comes with the territory of finally growing up. You see, there is nothing that says adults can't enjoy playing with toys just as much as kids. It's just that we play differently. One of my students (the same who made this one for me) asked me today how long it was since I last played with toys. I had to admit, I played with toys almost every day. When ever I pose my action figures, sort my collection, or even just look at my toys - am I not playing? And in the broader sense, am I not playing with toys when I goof around with my smart phone, installing various apps, playing candy crush, and so on. Is this not play? When I get together with friends to play board games or cards, can't this too be considered playing with toys?

We play different than the kids, but we absolutely play.

The biggest difference seems to be that kids dare to admit that they are playing, but adults tend to camouflage it behind fancy words. "Us, playing? No, we're just having an 80's theme party, and the He-Man cartoon looping in the background is just to be authentic". "Me? I'm not playing, I just had to get the Back to the Future Lego for my bookshelf". "These are not toys, these are expensive cars/porcelain dolls/model trains/bicycles/fishing poles/etc..."

Another difference is of course that we tend to analyze our interests. I did that a month ago, in an article on nostalgia. I'm not sure I thoroughly got to express what I actually felt, but the essence of it is that the 80s were such special times for plastic toys that they more or less created the modern toy collector/pop culture nerd.

One of my fellow enthusiasts, G.I. Jigsaw, wrote a comment that I felt was worth reposting in its entirety:

I often ask myself, why am I still collecting toys in my 40s.
I was 6 when Star Wars and it’s Kenner lineup was released, 11 when GI Joe – ARAH was released. These were fantastic toys, and I spent many hours playing with them. A year or so later, I gave up on buying toys, though I still loved them, and eyed them at the store.
I think you hit the nail on the head – it was a convergence of forces that make the 80s toys so beloved. Quality, story, sheer numbers, and technology. Though the 12 inch GI Joe is loved by many, the size of the Kenner Star Wars line really allowed kids to “buy them all!” As for GI Joe, I had read that the strategy of the first few waves was to allow families to get the entire series for under $100. It worked. 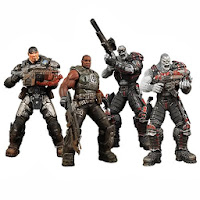 I do like the new as much as the vintage, mostly because they didn’t have those toys when the movies came out (Predator, Alien), but also like the creativity of new stories (Gears of War (left), Walking Dead).

I love the craftsmanship of toys. They are works of art in my opinion. The sculpting and detailing are phenomenal. I still enjoy the simplicity of the Star Wars Kenner line.

Like you, “I collect vintage toys because I have potent, and delightful memories of playing with these toys as a kid.” My family didn’t have a lot of money growing up, but my parents somehow managed to get me some of the toys I loved, because they saw my brother and I playing with them all the time. 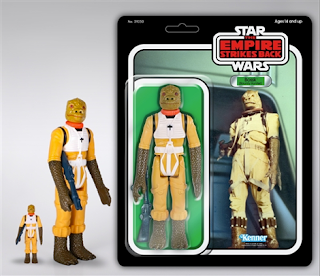 I even specifically remembering when and how I received most of them. Those memories carry over to the new Gentle Giant Jumbo Kenner figures (example to the right). The ones I loved as a kid (Death Squad Commander, Jawa) were the first ones I purchased. Interestingly, I never like Death Star Droid or Walrusman and to this day, I still haven’t purchased those GG equivalents. I remember going to Child World on a Friday night when my dad bought me the Kenner TaunTaun and Hoth Han. It is the reason I preordered the GG Hoth Han so quickly. 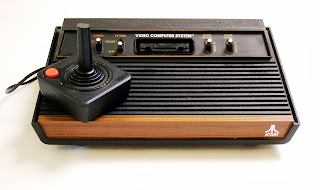 Around the time I was moving away from toys, I already had an Atari 2600. It didn’t overwhelm me but I can see how today, video games and the internet capture the attention of kids faster these days. They are also a great babysitter by parents, unfortunately. There are two years olds that can navigate an iPad better than me.

I still think the quality is here today, the same as back then. I do think some of today’s toys are very original – but the larger figures (6 inch Gears of War) and cost of plastic puts a price tag on toys where parents couldn’t buy them all.


I am also “glad I was invited to the main show - as a child in the 80s - to experience it first hand, and I'm glad to be around now, for the after party.”

Make sure to check out G.I. Jigsaw's blog. He writes about toys, comic books, and has made some really cool dioramas.

Thanks Jon. Your original post provided some great moments of reflection.