I have this feeling that Marvel is continuously trying to better themselves, and are learning from their mistakes. Now, I don't really mind any of the movies from Marvel Studios, but there are obvious quality differences, with Iron Man, Thor, The Avengers and Iron Man 3 in one end, and The Incredible Hulk, Iron Man 2 and Captain America: The First Avengers in the other end. 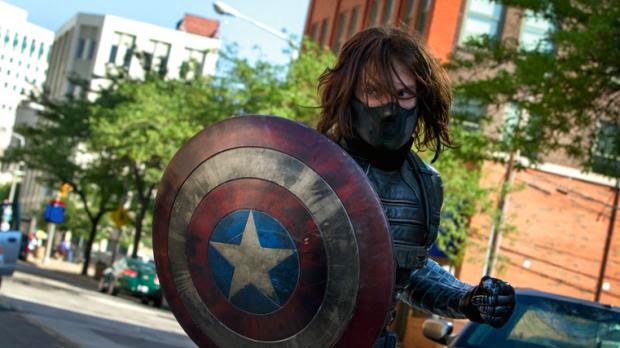 The first Captain America movie wasn't bad, rather than flawed. The movie didn't feel like a fluid piece. It's difficult to make the origin story look good in the movies. Now, we're past this. The movie universe knows Captain America. The movie audience knows Captain America. We can be treated to a story that stands on its own. Expectations were surprisingly high, after seeing the various trailers, and trying to figure out the plot line without getting too much of the movie spoiled, I found myself unusually excited.

Expectations were met, it was a complete blast. Now, the part I was looking forward to the most, didn't exactly pan out how I had hoped, but it didn't really matter, as I was fully enthralled to the very end.
A thoroughly fun movie: Interesting characters and character interaction, impressive battles, well-paced story, and lots of goodies for the Marvel enthusiast.

Read on for a complete review of Captain America: The Winter Soldier. And beware, there could be some spoilers.

When we first meet him, Captain America is hanging around in Washington D.C. He's working for Shield, and still trying to adapt to the contemporary world. In fact, apart from the scene where Cap and his team rescue a kidnapped boat, the entire movie is set in D.C.

Captain America and Falcon
Steve Rogers is running some laps when he runs into Sam Wilson, and they sort of bond through both being war veterans. I really like both this part, and the following sequences with Captain America and Falcon, because it shows that Rogers isn't necessarily a man out of time, he's just in a different situation than many of the other people he meets. He's a soldier. Black Widow, Nick Fury, Tony Stark, Bruce Banner, and all the others - they are different. They have fought the big battles, but they have mostly done it on their own, either as agents operating in solitude, or as lone heroes. But Captain America is a soldier first, and a superhero second. A theme through out the movie is relying on others, fighting alongside friends, trusting the guy to your left.


That said, I found it a bit weird that after Steve Rogers is being told that he can't trust anyone, he still has doubts about the Black Widow, who he fought alongside with in the battle of New York. But, I guess in this universe, where mind control and shape changing already has been shown, it makes sense to question the motives of your friends.

Rogers and Wilson connect, and it's apparent that they can trust each other, both being honest-to-God good guys and war veterans. Falcon was truly an awesome character, and his combat scenes were impressive to the point where it's weird he's not already working for SHIELD, who seems to employ these kinds of people.

One thing I particularly liked about the first part, was how they recapped the first Captain America movie. Rogers is visiting the Smithsonian, where a whole section is attributed to Captain America and the Howling Commandos. Here we see interviews with Peggy Carter, we hear information about Bucky Barnes, and of course see the golden age costume of Captain America.

Captain America is surprisingly relevant
Admittedly, Captain America has never been my go-to comic. I have picked up an issue every now and then, but my main knowledge of Captain America has been through The Avengers. And I guess I'm not alone in thinking like this: Captain America is the boring one, he wears the flag, and it all feels a bit silly. The movie plays on all these strings, and it works. Better than in the comic, I'd say. Cap is the good guy, he's so good that both Black Widow and Nick Fury insinuates that he's too good for SHIELD, and that's why he's the best suited person to clean up when Fury loses control over his entire organisation to a certain Alexander Pierce, board director with bad intentions. Captain America isn't fighting for an organisation. He's fighting for a nation. He's the good guy that steps up when everyone is in danger.

The plot revolves around government surveillance, which is both a relevant and important. All the digital traces people leave behind are being used to map out their necessity to be eliminated by the enemy of the movie.

A big plot devide of the movie is the brand new Helicarriers, hidden underneath the Triskelion, SHIELD HQ, Now, the Helicarrier in The Avengers was more a floating command center, where these Helicarriers are built purely to destroy stuff. We're never really treated to an example of their destructive force until the very end, so there's not really any sense of what's at stake. We're being told that they can kill millions of people every day, but so can a well placed biological bomb.

And Fury suddenly finds himself in lack of control over these monsters. Who's behind this plot?

Well, let me say it like this: Some old friends and foes of Captain America.

Spy movie? Not so much.
Now for the part that contains some spoilers, and where I actually have to critique the movie. I anticipated a spy movie, who's the "real" villain, who can trust who, what's REALLY going on? I had hoped for double agents that turned out to be triple agents. I had hoped for big surprises, like we sort of got in The Ultimates 2 - Where Black Widow turned out to be a villain. In this movie, it's very obvious that Black Widow is on Cap's side, and they are both on the run together for a large part of movie. I like the proper conversations they have about friendship, and the nature of their mission, all though their small talk is a bit lame, centered around Natasha wanting to hook Steve up with his neighbor.

Now, I do like Black Widow better as a hero, but this is where the movie failed to surprise me. No triple agents, no "whoah"-moments, and the true villain - or rather who he's working for - is revealed very early on.

Now, that ended up not being too much of a big deal to me, because I got completely distracted by fantastic action scenes, and kick ass appearances by classic Captain America villains: Batroc the Leaper, Arnim Zola, The Winter Soldier. The way they did Arnim Zola was a bit surprising, truthfully a bit creepy, and very instrumental to the plot. I guess they just as well could have called the movie "The Revenge of Hydra", but at least with the current title, they managed to keep some sort of secrecy regarding the plot.

A great superhero movie about friendship
The movie feels very fluid, the parts blend perfectly into each other. There's no dead space or slow moments, yet it doesn't feel like our heroes never get a breather. I'd like to say that the impressive and balanced pace was the best feature of the movie, but truthfully what left the greatest impression were some of the battle scenes.

All our heroes take part in exciting battles, and the best two were probably when Captain America escapes the Triskelion, and when Falcon is being chased by Quinjets. In the first, we'er truly shown how skilled a combatant Captain America is, and what he's actually capable of. In the latter, we're treated to a thrilling aerial pursuit, and being shown that Falcon is every bit of a superhero.

I doubt the audience will be surprised at what they see. After all, superhero movies follow a certain pattern. But I can say this:  The sequences between Captain America and the Winter Soldier, while some what predictable, doesn't end exactly like you'd expect.

Marvel Studios have managed to maintain what is essential about Captain America, while making the movie exciting. This is no mean feat, because on paper, literally, Captain America has never managed to excite me. At least not in his own comic. And I guess that's where they have done right in The Winter Soldier. They have given Captain America interesting friends, and they managed to convey that you can't, shouldn't, and doesn't need to fight battles alone  - pair this with a decent story and impressive action, and you have one great superhero movie.