Sgt. Savage and His Screaming Eagles

Today we're all treated to a guest article from my good friend, Aaron. 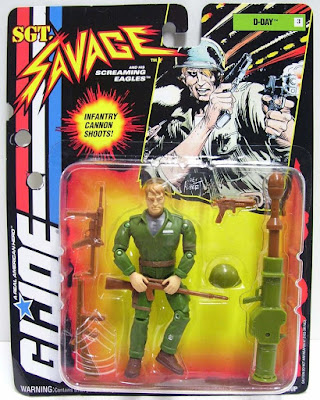 An enthusiast like my self, Aaron has unique knowledge on several vintage toy lines. What's cool is that Aaron has very specific passions. He's an avid collector of anything Indiana Jones, for instance. He's also getting increasingly better at writing about his hobbies, which has led to him starting his own blog. It's absolutely worth checking out. Leave him comments, and encourage him to continue writing.

But like all good people, Aaron isn't a one-trick pony. It's not just the Indy toys. He knows a thing or two about more obscure toy lines as well.

Like Sgt. Savage. This is where I'm at an absolute blank. I believe I have a Sgt. Savage figure, I know the toys are slightly bigger than G.I. Joe - A Real American Hero figures. I know they were released sometime in the mid-90s. I know the story is set to World War 2. And that's it.
Luckily Aaron steps up to share his knowledge on Sgt. Savage!


GI Joe is one of those toylines that’s synonymous with the 1980s. Every kid across the world had GI Joe toys or knew someone who had them. But, in the 1990s, the GI Joe line came to an end after the rather aggressive marketing from other popular toylines of the era like Ninja Turtles and Power Ranges. However, before the toyline came to its end in 1994, Hasbro tried to keep it alive with 2 sub toylines that were first Sgt. Savage and His Screaming Eagles, followed up by GI Joe Extreme. 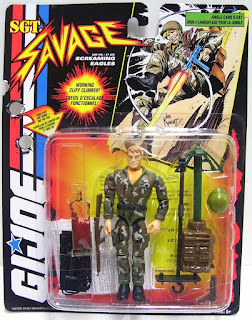 The story to Sgt. Savage is very much Hasbro’s way of combining Captain America and Sgt. Rock into one character. In 1944, Sgt. Robert Steven Savage, the US Army’s most decorated soldier is leading a covert mission behind enemy lines. Savage is betrayed by one of his own men, Garrison Krieger and is captured. During his capture, Savage’s body is experimented on and then he’s cryogenically frozen. 50 years later, in 1994, the GI Joe team find the secret bunker where Savage’s body was kept. When they revive him, they find the genetic alterations and DNA formula he was given in the 1940s maintained his youth, but also gave him super strength. In the present day, General Hawk gives him command of a rowdy bunch of recruits, which Savage trains up and calls The Screaming Eagles. It has that Sgt. Slaughter and the Renegades flavour it as well.

The tie in figures was released in 1994. They’re taller than the average Joe, coming at more in the 5” scale. They had the same articulation as the Joes, though these weren’t O-Ring figures, think the JvC T-Crotch Joes and you’re in the right direction. The first figure in the series, Commando Sgt. Savage came with a promo video tape, which has a 22 minute cartoon that explains the origin of Sgt. Savage. In a bit of history, this tape was the last thing that Sunbow would make for GI Joe (Sunbow made the original G.I. Joe cartoon).

I think the figures are an overlooked part of the GI Joe line and was bypassed as it was the end of an era. Though I do recommend checking them out, as they are fun, they're also a little flimsy at times. But as long as play isn’t too rough and you’re gentle, they’re fine action figures and do look good  alongside other toy lines.

_
Thanks for the article, Aaron. Enjoy your day, people! And open your toys!
Posted by Jon at 12:45 PM