The Box Art of MOTU Vehicles

It's really the weirdest thing. Masters of the Universe - the deliciously silly, yet totally awesome 80s toy line, with all its ridiculous characters and brightly colored insanity had quite possibly the coolest box art of any toy line... ever. 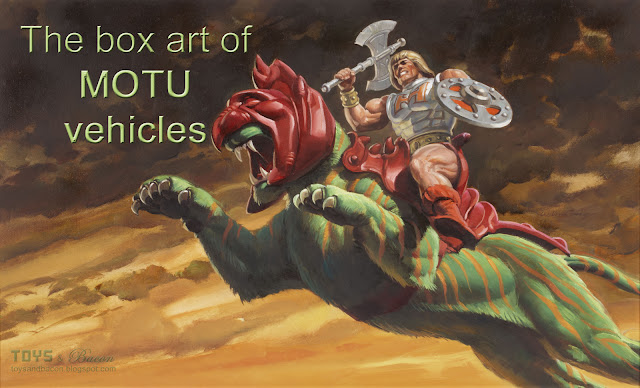 And I say this, as a hardcore G.I. Joe collector, who also has a strong passion for the transforming robots, two toy lines with seriously wicked artwork on both figure cards and boxes.

I guess it's the discrepancy that amazes me the most, because even back in the late 80s, I found Masters of the Universe to be a bit silly. Yes, this was a toy line that even to some kids was silly, yet the boxes of the vehicles and play sets had - for the genre - ultra-realistic paintings done by serious artists.

The concepts were just hilarious, when you isolate them from the toy line and the over all idea behind MOTU: sorcery, sci-fi and and wonky playfeatures in a happy mix. But with a very limited amount of vehicles and playsets, they all pretty much ended up becoming 80s toy icons. Some more than others, of course.
And the art from the boxes and MOTU magazines? By God, did they help to elevate these toys to a higher level.

I'm going to show the art of a good handful of the vehicles. I guess it would make sense to also show their toy versions, but truth be told, there's not really any differences. The vehicles are depicted surprisingly similar to how the toys looked, which makes this even weirder. Somehow, Mattel had found artists - Rudy Obrero, William George, Earl Norem - that could take utter and total sillyness, paint it the way it actually looked - and still make it cool.

We'll start with two of the later vehicles: Fright Fighter and Blaster Hawk. Obviously two flying planes, one for the heroic warriors, one for the evil gang of Skeletor. What's particularly cool here is that you can see the playset Eternia in the background. The perspective makes it looks huge.

We move on to a favorite of mine, and I've mentioned it a couple of times before: Battle Bones. This great skeletal dragon also served as a carrying case for the figures, and it worked just as well for the heroes as for the villains. Notice how stoic the figures are, as they were painted as close as possible to the posture of the toys. Artist William George painted this monumental image, and he is the pen behind several of these pieces.

Can Battle Cat really be considered a vehicle? Or is it more of a character along sides the other heroic warriors? I think the latter one. But it does hold a figure, and it was sold in a box, instead of on a card. The original Battle Cat had no movable parts, if you exclude the removable armor. Yet it is one of the best toys ever made. The color scheme, the characteristics from cartoon and comics, the cool details on the armor, the sturdiness of the toy itself.
Probably the art that differs the most from how the toy looked, as the toy had significantly less details. But his pose is fairly accurate. Point of interest: The sky. Look at that toxic sky. You know Skeletor has been out on his business and poisoned the clouds, and now He-Man and his loyal friend, Battle Cat has to save Eternia again.

Land Shark was Skeletor's ride, and it doesn't get a lot sillier, unless you turn to more "funny" toy lines, like Teenage Mutant Ninja Turtles. Yes, the Land Shark would fit in with TMNT, which should say a lot. Yet, they took the effort to make a realistic and wicked piece of art to go along with the colorful metal jaws. Twice. First we see it alone, then in battle with He-Man's "Laser Bolt". 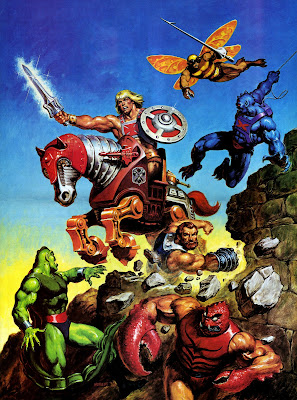 The vehicles often came in pairs - with that I mean they had a complementing vehicle in the other faction. Battle Cat had Panthor - Skeletor's purple cat. The above shows clearly that Laser Bolt and Land Shark complimented each other. The same can even be said about some figures, like Stinkor and Moss Man, or Jitsu and Fisto.

Fisto can be seen here, in an art piece featuring Stridor - the mechanical steed. Stridor too, had a mirror image in the opposite faction, in Night Rider.
It's interesting to see how full of action this image is, and Stridor does indeed look to be painted mid-jump. The toy was more mid-trot...

Notice how colorful the characters are, without really looking too silly. Well.. A bit silly maybe.

All these figures have so far been made in the contemporary toy line, Masters of the Universe Classics, but I fear we'll never see a Classics Stridor. So far, we've been treated to Classics Battle Cat, Panthor and Swift Wing, the horse of She-Ra. We have also seen the release of the impressive Wind Raider. It would surprise me if we see more vehicles in the line, all though Stridor would be a popular choice for the next vehicle slot. In addition, it would be an easy repaint to make Night Rider.
But I just think Mattycollector will take a different route, and try their best to make all the figures first. Lets face it, Classics is on the verge of being cancelled, and I doubt it will survive beyond Castle Grayskull. We can still hope.

I'll end this with two of my favorite pieces of MOTU art. They are favorites for different reasons. The first is just an impressive painting, with tons of action, and a very creepy depiction of an evil vehicle. The second is just a prime example of what I talked about in the introduction. A hilariously silly vehicle being painted as cool as humanly possible, making sure it retains a tiny bit of dignity.

The first is Monstroid. I'll let the image speak for itself, but I'll say that I love the idea of ancient monsters living in the cold, dark deep of the sea, emerging only when absolutely forced, then causing a complete chaos. A favorite figure of mine back in the day, Extendar, is making an appearance. I like that.

Finally, to show the discrepancy between silly, borderline lame vehicles, and great fantasy artwork: It's the Dragon Walker. In my opinion, the Dragon Walker is by far the lamest among the MOTU vehicles, both for its useless play feature (it could move awkwardly along a plane surface), and for its looks. And that's saying a lot. Yet, I love this art work. There's something about the colors on the walker, and on the sky, the stern look on He-Man, the terrified evil warriors in the background, the tiny monster in the foreground. You see a vehicle where ancient magic and masonry has been blended with technology and science. And the whole piece just has that old time painting feel to it. 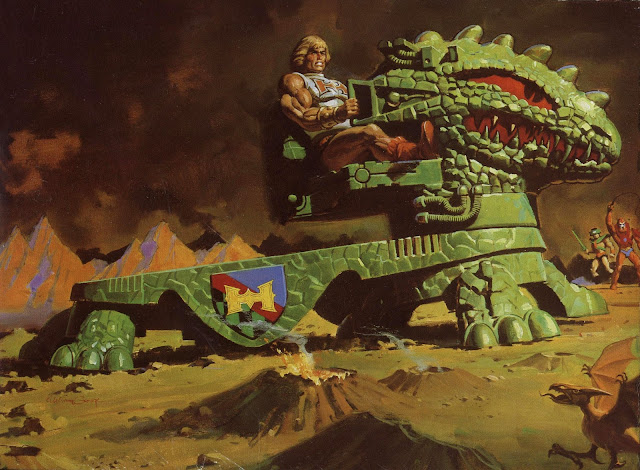 I'll get back to more MOTU artwork in the near future, but I'll let you in on something that isn't a secret any longer. I had Masters of the Universe toys as a kid, and I'm enjoying the current Classics toy line. But really, more so than the toys themselves, what I like most about this universe is the idea behind the toys, and the way they were presented to us.