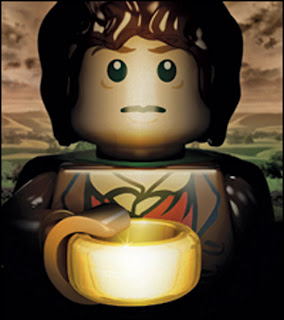 Well, it's been all over the net today, and even though I don't feel the need to spread news like this, I'd like to make a few comments. When ever a the big companies make a movie or game they know will be popular, they shop around for companies to make spin-offs. For my part, I instantly think about toys and action figures as the most important spin offs, but it's easy to forget that for ever popular movie there's just a pile of random stuff with the movie name written on it. Anything from napkins and pens to cups and jewelery will be made with the logo of The Hobbit. And everything is to a certain degree collectible.

I say to a certain degree for a reason.

I have a friend, who of course will remain anonymous, who has a complete collection of Lord of the Rings action figures. These figures were examples of toys that for some reason fell between two chairs. They were obviously aimed towards collectors, as they were of the 6" scale, sporting both extreme details and a fairly high price tag in expense of play features and the stuff kids want. But they were produced in such a massive quantity, and all the die-hard collectors bought five of each figure. So, since these weren't exactly kid friendly, there will always be a massive amount of pristine LOTR figures standing around on shelves, or even better, lying around in unopened, mint condition.
At the time they were released, they were something like $10-30 a piece, depending on where you lived. Today, you can get them for a dollar or two.
Action figures are tricky. In order for them to become really popular and - more importantly in this case - a valuable collectible, the companies making them need to either produce a limited quantity, or make something that the kids want as well.

But that's not the case of Lego. I believed I have mentioned this before, but even Lego based on movies that are bad, tend to be great. I mean, it's Lego after all, you can never go wrong with Lego. If the set is uninteresting, the parts can still be used for anything you can imagine.

When it comes to Lord of the Rings, we know the movies are good, and we can expect some pretty epic stuff from the upcoming Hobbit movie as well. And has there ever been a world that's better suited to be built in bricks than Middle Earth?
I'm more exited for this than Marvel Lego... And that's actually saying a lot.
Posted by Jon at 9:49 AM