An excellent comic - in fact, one of the truly great modern comic books, with a fairly unique take on the superhero genre. With a main character that shares characteristics with myself, it's no surprise that I like it.
But again... an action figure that bears the marks of something made in the late 90s. 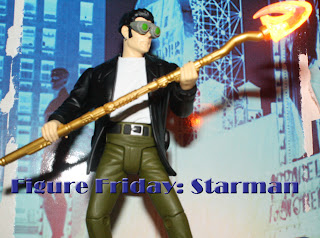 Read on for Jack Knight, Starman. The protector of Opal City.

There are a handful of comics out there that any comic fan should have read. I'm not saying you should like them, but they should be known for different reasons. For instance Watchmen. Most of you may have seen the movie, and I expect many of you have read the comic as well (or "graphic novel" as they try to call it to make it appeal to people who for some reason are too embarrassed to read comic books. Pity insecure people like that). 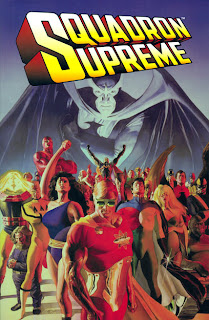 Watchmen is definitely not my kind of comic, as I prefer it slightly more colorful and fun. It's something I have felt obligated to read. And it's a good comic, no doubt. But it also suffers from it's own popularity. It's a bit like The Beatles. You have people actually believing that The Beatles did everything there was to do for rock music. And you have people who believe Watchmen was not only the single most important comic book, but also that it was unique.

Have you heard about Squadron Supreme? Introduced by Marvel Comics as somewhat of a joke towards DC's Justice League. This bunch of heroes (and villains) were seen as disposable by Marvel, which writer Mark Gruenwald used to his advantage when he wrote one of the most realistic and serious super hero comics to this date. Squadron Supreme deals with a lot of the same as Watchmen, and it is in my eyes far superior. It also predates Watchmen with a year.

And this is important: There are great comics out there you may not even have heard about. Starman from the mid 90s is such a comic. 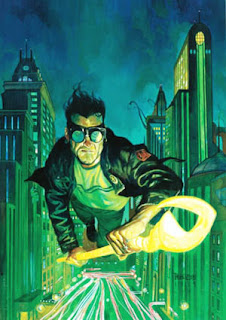 I guess it was made during a period where heroes got re-imagined. Starman was originally a golden age hero in the DC Universe, created back in the 50s. You had the standard theme with a guy dressing up in a costume to protect his city. What (barely) separated him from the likes of Superman, Batman and all the other golden age heroes was that he got his power from "the cosmic rod". Over the following decades there were several Starmen, but neither of them were related in any apparent way to the original Starman, Ted Knight.

But in 1994, writer James Robinson created Jack Knight - Obviously the son of Ted Knight. Almost unwillingly, he takes on the job as the protector of Opal City. And as you can see in the picture to the left, he doesn't feel the need to dress up in costume.

Robinson and artists Tony Harris and Peter Snejbjerg produced this comic monthly from 94 to 2001, and the result is a fantastic bunch of superhero comics I'd have no problem recommending to anyone who likes to read.

The stories usually revolve around Jack and his family having to sort out some intergalactic or supernatural trouble. It's written with a very quirky sense of humor, tons of references to pop culture, and more than sufficient amount of those bad ass super hero moments (but for some reason, these moments usually involve someone else than Jack himself).
But the comic is first and foremost about Jack Knight's adventures, and experience as a reluctant superhero. And you as why I like it? Well, apart from great story telling and amazing art (Danish artist Snejbjerg has one of the most unique styles in the industry), I identify with the main character. Jack is a hopeless romantic, and an even more hopeless nostalgic. In fact, the whole nostalgia is a recurring theme, with the adventures of previous Starmen being focus more than once. Robinson also made sure to constantly write history into this mini universe, where every character had a small background, often with ties to the greater DC Universe.

Jack Knight is also a collector. He loves old stuff, items with a history, and eventually ends up running a store with collectibles. 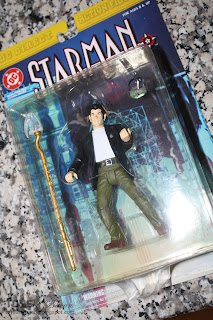 This toy is made in 1999, at the height of the modern Starman by DC's own toy company, DC Direct.
Let us just get it out of the way. This figure comes pre-posed. He has articulation, but there's really only one suitable way to display him.
I've written about these kinds of action figures so many times, so I don't really feel the need to go there today.
And that's a good thing, because when it comes to DC Direct's Starman from '99, I don't really mind the pose.

What immediately struck me when I picked up this toy, was the background. Jack Knight is positioned in front of his beloved Opal City, his home he tries valiantly to protect (without losing his integrity that comes with the territory of being a superhero). It's a very detailed background, and it makes me realize I want more generic backgrounds for my toys. Something I can make myself, maybe? 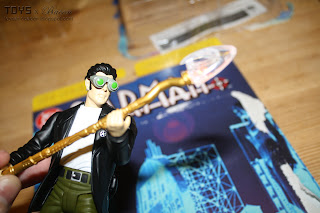 Starman comes with two accessories. The first being his cosmic rod, the second is a set of removable goggles. Jack used the goggles shield his eyes from the light of his cosmic staff. I appreciate headgear that is removable, almost to the point where it's a deciding factor to whether a figure fails or succeeds in my eyes.


The staff has a really neat touch with a light up function. The batteries (double LR44 button cell) are inside Jack, and the staff connects through two metal parts in his hands. It looks good when it lights up, but for some reason, I find it a bit old fashioned. It almost remind me of the rare, and weirdly expensive Laser Light Skeletor and Laser Light He-Man from 1988 - both came with gigantic backpacks where the batteries were stored, both had weapons that would light up. 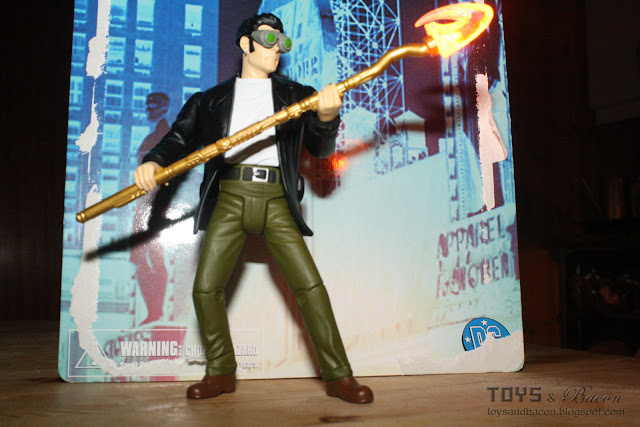 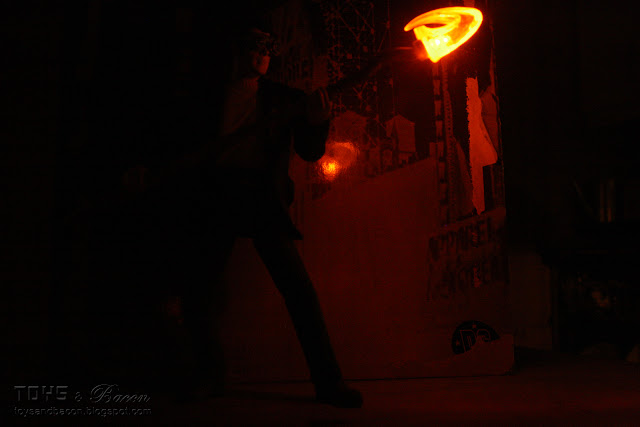 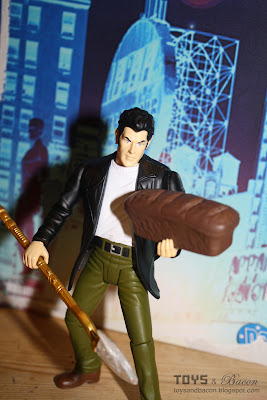 The figure itself is pretty cool looking, once you get past the pre-posed stance he's in. It doesn't really look like Jack - he's far too clean, neat. In the comics, Jack is more rugged and untidy. His jacket does have that great Starman logo, which I sadly forgot to take pictures of.

I can't get myself to start picking up the contemporary DC action figures, because I know myself. If I get one, I'm likely to get far too many.
But I could also see myself happy with having just one, and that would be Jack Knight, Starman.

Sadly, it's unlikely we'll ever see more of Jack Knight in the DC Universe, as I believe there's a conflict with who owns the character. As far as I know, Robinson sits on the rights to use Jack Knight, and DC can't use the character without Robinson's permission.
But then again, the story about Jack Knight, Starman, is finite. It ends with Jack passing on his cosmic staff, and giving up his life of superheroics, for a life of collectibles, romance and nostalgia.