Not at all relevant in current superhero comics, actually far more outdated than the characters it opposed at the time in the mid- to late 90s. But it's easy to forget that at one point, Spawn was extremely popular, rightfully so. It was something a bit different than what the big two was producing. And for me personally, it was the character that kept me into comics during those difficult years as a teenager. 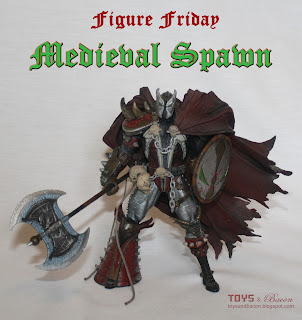 This is of course first and foremost a Figure Friday, featuring the toy version of Medieval Spawn, but I'd also like to share a few anecdotes on Spawn as a comic character too.
Read on!

Todd McFarlane. If you follow superhero comics you will instantly have quite a handful of associations to this name. Some will forever remember him for his detailed, almost grotesque art on Spider-Man and Hulk. Some will know him for being an avid collector of baseball memorabilia. For some, McFarlane is synonymous with the toy-statues/stactions his company McFarlane Toys began producing. I've mentioned the stactions in earlier entries of this blog.
My first encounter was as early as 89, when I read G.I. Joe #60, drawn by Todd, introducing a handful of colorful new Joes.

But honestly, a guy that has done a lot for both comics and toys, he will absolutely be most remembered for his idea of creator-owned characters and creator driven companies. This was of course not a new thing, comic creators in the late 80s got paid more for their creations than lets say the 40s or 60s.
But Todd McFarlane and a few buddies were tired of not having full creative control of their creations.

Together, they created Image Comics, a company where the creator had all the rights to his own creations, and could basically take their characters anywhere.

Off the top of my head, they were Todd McFarlane, Jim Lee, Whilce Portacion, Erik Larsen, Marc Silvestri and Rob Liefeld.
Marvel Comics and DC were run by people who knew how to run big companies. The founders of Image Comics were, with the exception of Rob Liefeld, all skilled comic artists, not necessarily business men.

Spawn was the main attraction of the early Image Comics, and for me it was just the right kind of comic to read at that time.

Spawn came just at the right time. In the mid 90s, superhero comics were as big as they would ever be, and that was reflected in the amount of work creators had to put into the books. The quality of some of the biggest selling titles were incredible low, at least when you compare it to the same title just a decade back. A good example of this is X-Men, which probably was at it's absolute highest in terms of sales, but at it's quite possibly lowest in terms of creative quality. 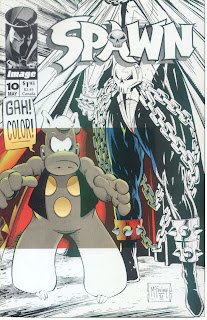 With Spawn, Todd McFarlane tried to shake things up a bit. Spawn was a different kind of superhero. First of all he was dead, he was a demon, he was ugly. He had a crazy costume with chains, spikes and skulls. And he got his ass handed to him by various colorful enemies over and over.
I wouldn't say that Spawn was a grim and gritty comic, but it was definitely cut from another tree than the traditional superheroes from the big two.
And it was just what I needed. This was a point in my life when I was too old to be reading comics for kids, and too young to realize what the whole thing was all about. To put it simply, I was in junior high. Superheroes were lame, but Spawn was cool.

An issue of the comic I'd like to showcase is #10. This was a monumental issue for a few reasons. It's also a ridiculous issue for the same reasons, as it's centered around the whole deal with creator-owned characters.

In #10, Spawn teams up with another creator owned character, Cerebus. Together, they try to save well known superheroes from their corporate prison cells. 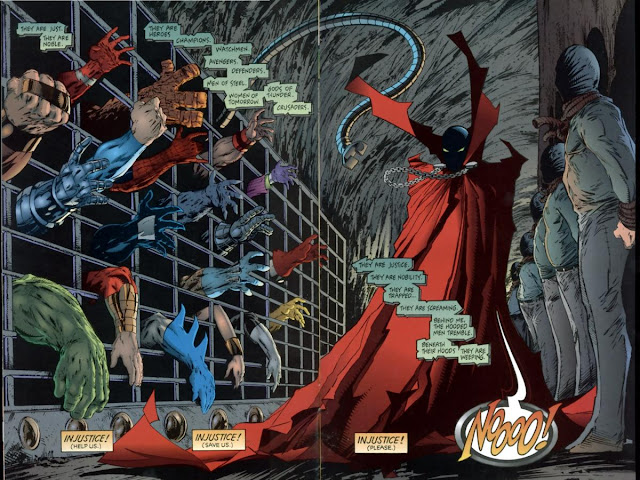 Recognize the trapped heroes (and villains)? It's all very symbolic and pompous to the point where it's almost kinda cute.
It may look like total garbage, and by today's standards it most definitely is. But the issue does feature some cool art, and it stands as a very intense piece of comic history. You see, the deal with creator owned comics, today this is a lot more common. And comic creators can thank the Image founders for that.

Today, Spawn is more irrelevant than the characters it was created to contrast, but me and millions of other teenagers found him totally bad ass back in the mid to late 90s.

Medieval Spawn was introduced early in the comics. The story is that during the centuries, there has been several Spawns, all hell bound warriors who have to face off against angels, demons, the devil and other weirdos. What separated Medieval Spawn from the contemporary one is that he has a cool armor and bladed weapons. 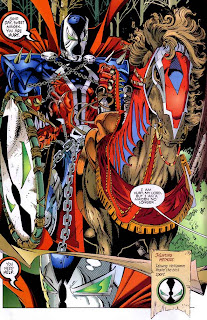 The toy is a bit different from the comic version. The comic dude is a lot brighter. The toy features the kind of colors you'd expect in the medieval times. Blood stained cloak. Dirt colored armor. Blood spattered shield. Battle worn axe.

I'll admit, I really love this toy, but for slightly different reasons than last week's Figure Friday - which just was a thoroughly awesome toy in every possible way. Medieval Spawn has quite a bit of sentimental value, it's been with me ever since I got it - in every apartment I've had, this guy has been on the shelf.
And the toy shows clear signs of wear.  For instance, he came with three arrows burrowed into his shield, which are gone.


The articulation shows us something interesting, because by now you all know about stactions, the pre-posed combination of action figure and statue. This guy definitely has the staction quality with it's fantastic sculpt and pre-posed left arm. But he has a surprising amount of joints. 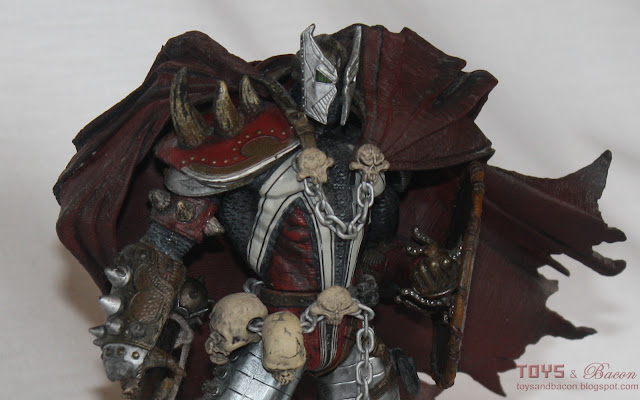 Full mobility in his right arm, so he can easily raise his axe and let it fall on his enemies' necks. His head can rotate, as can his waist and wrists. A joint in his thighs, knees and ankles. This is not bad.
But... It's not enough either. It's just the amount of articulation to give his joints the ability to move, but not enough articulation for me to be able to pose him any cooler than the way he came. So the articulation he has is kind of redundant, and he could just as well have come with zero movement.
And that's how future McFarlane toys came. As stactions. 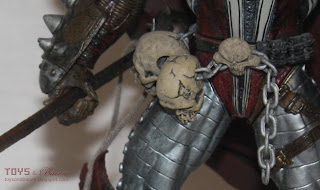 What I really like about this toy is all the details. The sculpt is amazing, from the spikes on his boots to the rivets in his helmet. From the ridges in his plate mail, to the folds in his cape. Cool details like the demon on his left knee, the skulls hanging in chains from his belt and chest.
And the show stopper: His battle axe. This thing is a beauty. It's massively sized, it's painted in several different colors, it has a cloth string hanging from its handle. And the sculpt, just look at the edge, the dragon and the hilt. 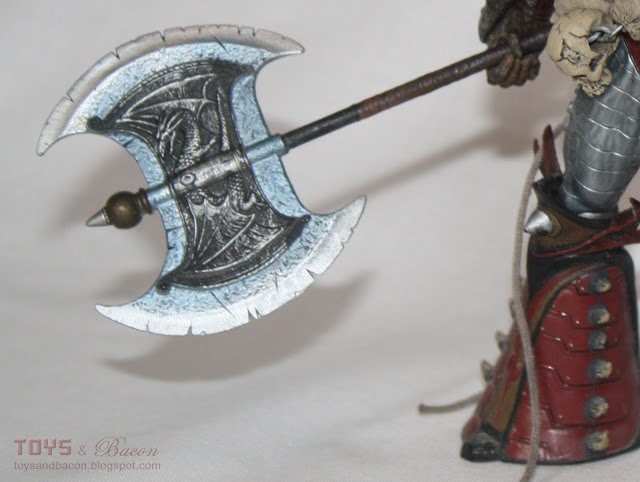 Like I said, this is a figure I've brought along with me where ever I go. Not necessarily because it's a great figure (it's definitely visually pleasing, but today I own toys that outshine Medieval Spawn in every way), but because I got it at a time when I didn't really care for comics - at least not the way I do now. But maybe the comic Spawn, and this toy of Medieval Spawn was what kept my interest for comics up until the point where I started reading Marvel and DC religiously?
Another interesting thing is that I got this toy from my mother, and I was probably around 16-17. I usually tell my family and friends that I'm fully capable of buying my own toys, and at 17 I certainly didn't want any toys. But I loved this toy immediately when I got it, and I guess I still do. It's one of many times that the people close to me actually show that they know me. Like with the Black Knight I got from my sister. Or the dwarven king I got from my friend. 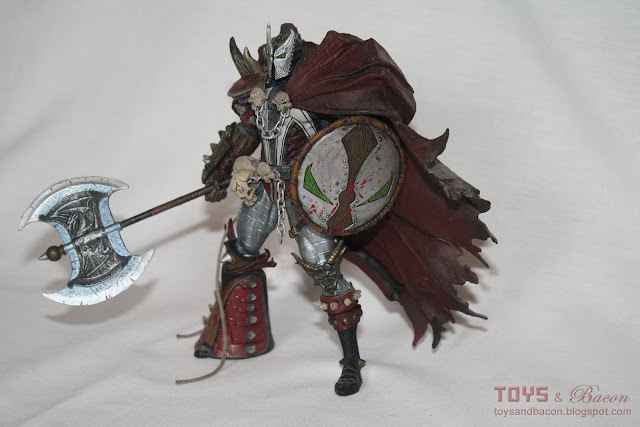 This toy has seen better days, it has broken parts, it's become loose in various joints, the colors are faded and it's actually started to fall apart a bit. But it's still on my shelf, and it will probably remain there as long as I'm into comics and toys.
Enjoy your weekend, people!
Posted by Jon at 3:53 PM

Very nice! We talked on /r/ActionFigures and I mentioned starting a job at a store soon; turns out he has a humble spawn collection, but impressive for a store in Lebanon nonetheless! He's a big fan, apparently.

I remember you reef. you should post some pictures of this store (if the manager allows you to), or at least tell us if there's anything cool in stock.