Plush dolls are weird. They are basically walking the border between the playable toy and the decorative stuffed toy. Not sure what I'm trying to point out, but I guess I mean that the intention of stuffed toys is that infants should have something soft to squeeze. While a doll/figure/toy is intended for kids with slightly more advanced motor skills.
But the last years, the original idea of the plush dolls have been turned around. Definitely still suitable for the youngest kids, but now collectors have also started to appreciate these simple toys. We've seen anything from plush superheroes and video game characters to plush literary and movie figures.
What's also interesting is that there seems to be a good amount of people making their own plush versions of known characters. 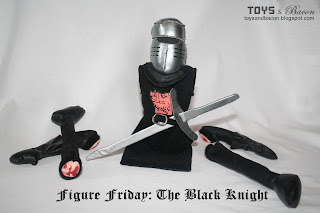 This is not a home-made toy. It's actually surprisingly well made, has some cool features and an amazing packaging. Pics, anecdotes and everything inside.
Yesterday was Thursday. Today is Figure Friday. And  the subject is Monty Python and the Quest for the Holy Grail's Black Knight!  Read on for more!

At one point, I was working at a youth club, and a recurring event was the movie night.
For some reason, I felt that the kids - in the very early teens - should be exposed to Monty Python, just as I had been when I was that age. I grew up watching reruns and tapes of Michael, Eric, Terry G, Terry J, John and Graham. I loved it. What was not to love? It was silly, it was slapstick, and in my late teens I also found the sarcastic and satiric side of Python.
I thought that The Quest for the Holy Grail, one of the all time great comedies would be appreciated by the kids.

They hated it. They didn't understand any of the jokes. Even the most blunt ones with violent humor, farting and funny looking characters was met with frowning and complaints. The story moved too slow, the story was incomprehensible, the special effects was lame.
I was sitting there snickering the entire movie, just like I do every time I see the Grail. And the kids looked at me like I was from another planet.
I'll be honest and say that this was a surprisingly stupid group of kids (and that's saying a lot, since I expect preciously little from kids), but the fact that they got nothing out of The Quest for the Holy Grail has me baffled to this day still. 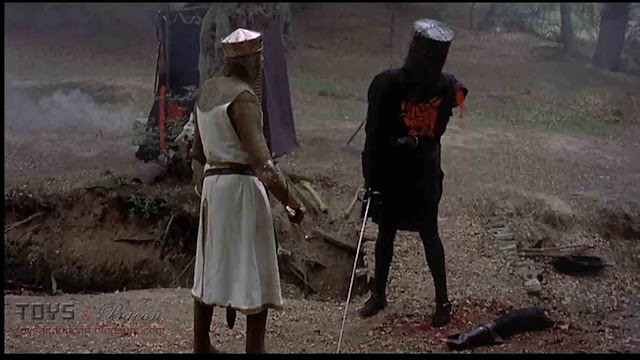 Monty Python was - and I assume this is not a controversial opinion - the best comedic act this world has seen. I will agree that they are an acquired taste, but the simplicity of their humor was universal, their "sillyness" was turned into their strength, the way they used the strength of every member of their group, the fact that the body of their work is massive - yet limited. The fact that they stopped doing what they did before they ran out of ideas. And most importantly, that the humor has stood the test of time, so that people born after their golden years could still relate to these magnificent people and their brilliant sketches. 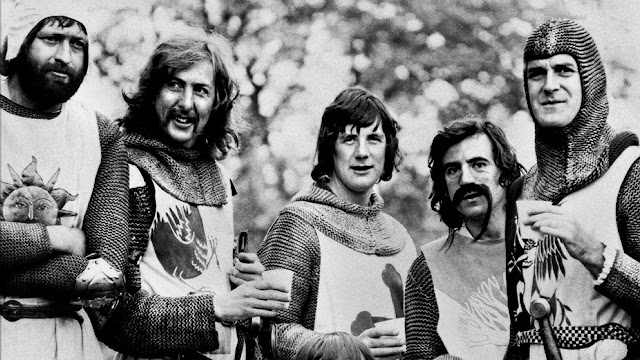 Obviously, I could go on about Flying Circus, their live shows, their other full length movies, the individual post-Python careers, etc. But this is Figure Friday in Toys & Bacon. We're going to talk toys! 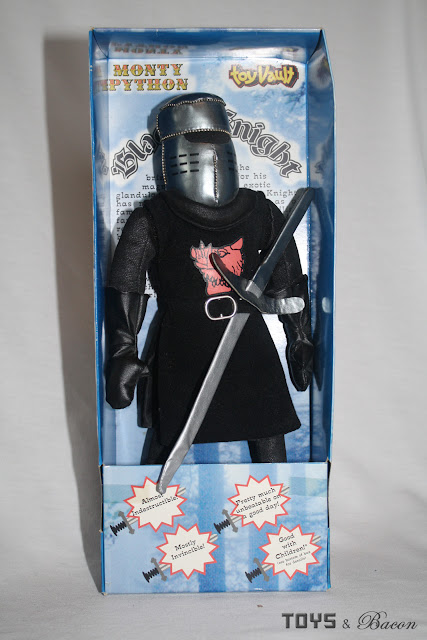 Plush Black Knight
By 2002, Monty Python's The Quest for the Holy Grail's status had far from diminished. Why would it? The movie is basically filled with sketches that on their own would be legendary. Every single phrase is quotable. Every single moment is memorable. The satire is deliciously wrapped in a muddy and brown looking medieval England, where the only shiny figures are the self-titled king and his men.
The movie is a masterpiece, and still my favorite comedy.
So when unknown (for me at least) toy maker "ToyVault" made a small run of Monty Python plush dolls, there was a certain sense behind it, even though they were based on almost 30 year old shows and movies.

I believe I got this toy from my sister, from whom I also inherited the interest for Python. I'll get this confirmed one day. 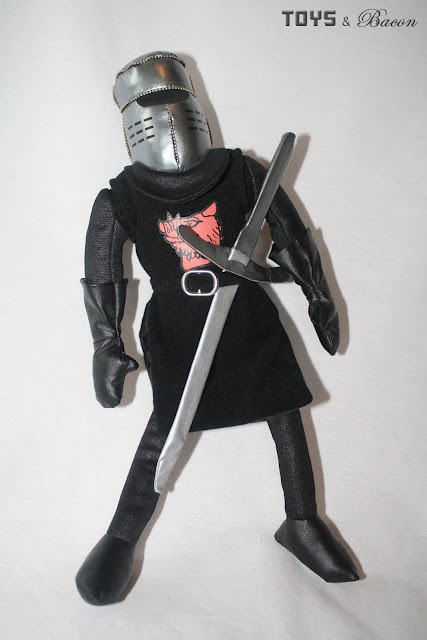 I find this toy to be just fantastic, and that's not just because I happen to love Python. He's actually extremely well made. Just by looking at the different materials he's made out of, you understand that this is not your average plush toy. Obviously, he's all soft material, apart from his metal belt buckle and chained beads in his helmet. But the texture of the soft goods are varied. His boots and gloves are vinyl, giving off a leather impression. His tunic is a velvet looking material. His helmet is made out of a shiny fabric, and his arms, feet and collar is textured to look like a chain shirt. The sword is silver fabric draped around what I assume is cardboard. And the printed board crest finishes up this gorgeous toy.
What's not to love? 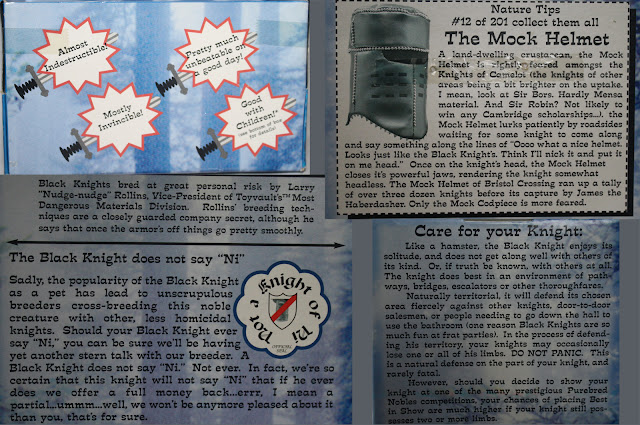 Plush Black Knight is on it's own right a cool and funny toy. But the packaging needs a mention as well. Not only that, it's filled with funny. Most of it is naturally far from Python level, but some of the jokes found on the package are actually very amusing.
The initial bio describes the Black Knights as a race separated from the humans. It goes on to praise their "remarkable toughness" and their skills with children. The last part has an asterisk with a further explanation on the bottom of the box. 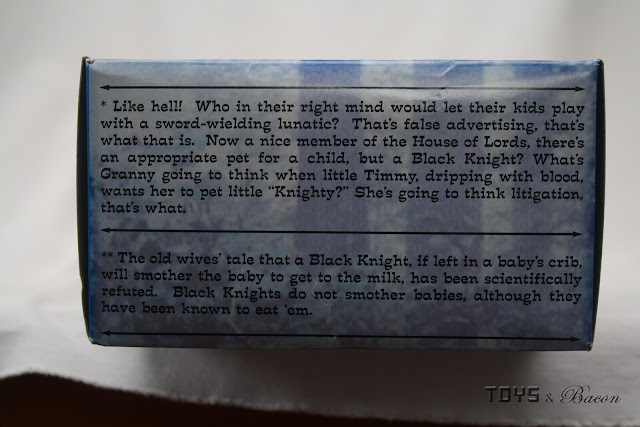 The Black Knight scene made an instant impression on me as a kid, and still to this day, I can't help but laughing over the ridiculous and hysterically violent segment of the movie. 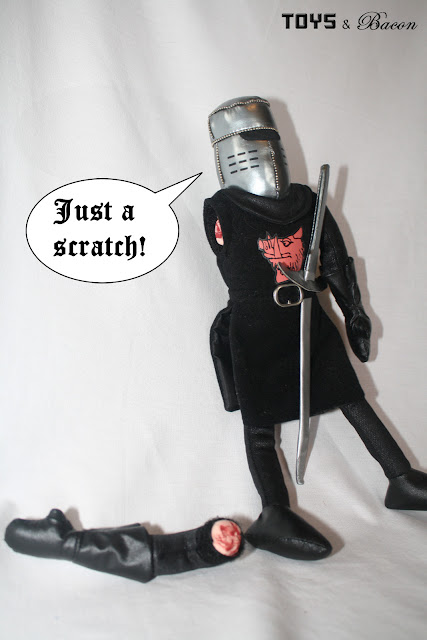 A bit of Velcro on all his limbs gives this toy a play feature that reminds me of Tyco's Crash Test Dummies toys, or Masters of the Universe figures Blast Attack and Horde Trooper.
I love the details they've given to his dismembered body and to the limbs. Flesh-colored fabric with a bit of red paint is obviously not as graphic as it was in the movie. But for my taste, it's the right combination of disgusting and cute. 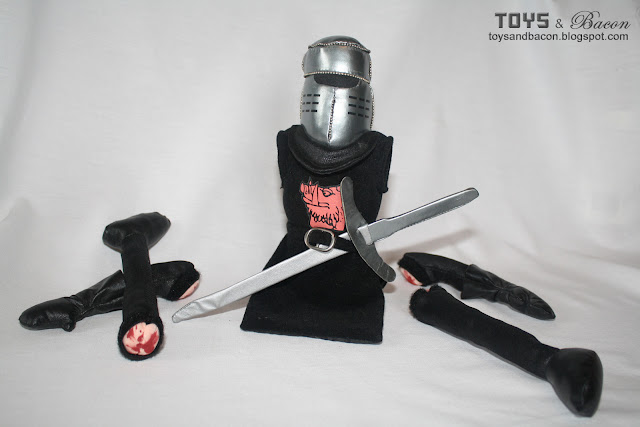 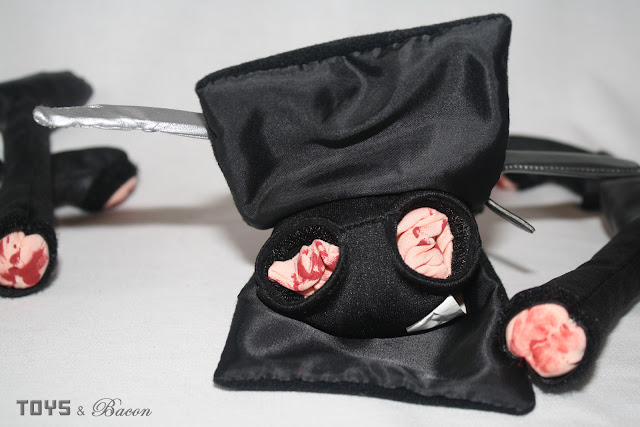 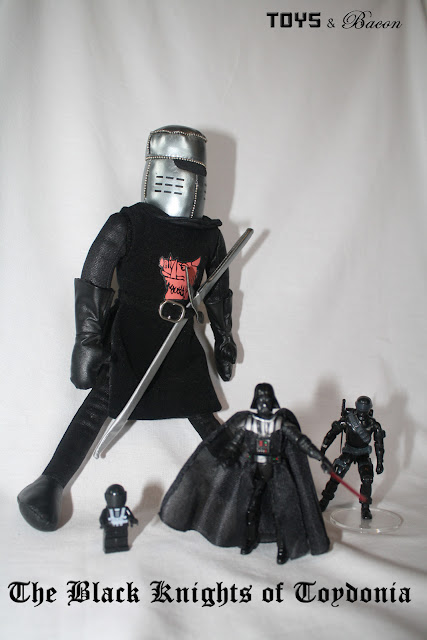 A prized toy in my collection, not only for the associations it gives, but for the fact that it's actually great toy that makes the most out of the category of plush toys.
And with that, we'll call it a draw.

Enjoy your weekend, people!
Posted by Jon at 4:05 AM

Well, if my memory is of the correct kind, then this particular item was acquired at Hamleys in London, the year was 2003, in October, I think! And Monty Python is how I learned English, and how I learned about the English, Monty Python and Black Adder... Classic! Good one, Jon!