For some reason, I feel Playmobil doesn't get the respect it deserves. Their models are incredibly detailed, and even though the figures are rather featureless and borderline creepy, the quality and play features of some Playmobil sets are fantastic.
Chance had me digging out an old Playmobil boat for this Figure Friday instead of the intended Lego set I promised. 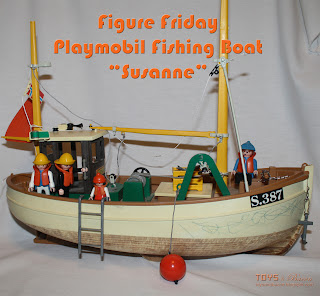 Read on for a little write up on the Playmobil Fishing Boat named Susanne!

I went to buy a blue plate of Lego today. I wanted to show off the marina I talked about on Monday, and instead of photoshopping, I could build the ocean. When in the toy store, I noticed they had some huge Playmobil sets. I remembered I actually have some Playmobil from back in the day. So instead of Lego today, this Figure Friday will be about Playmobil.
Here's the blue Lego plate by the way. 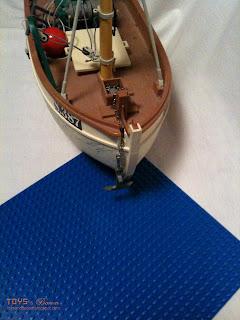 For some reason, I have always had a divided opinion on Playmobil. And everyone I talk to about this kinda feels the same.

I had a lot of toys as a kid, and it's clear that I have played with this boat, but for some reason, I remember being a bit annoyed by Playmobil. They just didn't match the Lego in playability, and the figures certainly didn't match G.I. Joe in mobility. And if I had the choice between "Playmo" and Lego, I went for the bricks.
The figures had the grinning, unnatural faces - just like the Minifigures. But the extended sets with vehicles, animals and environment lacked any option of customizing. And that was the beauty with Lego - you could construct your own world. 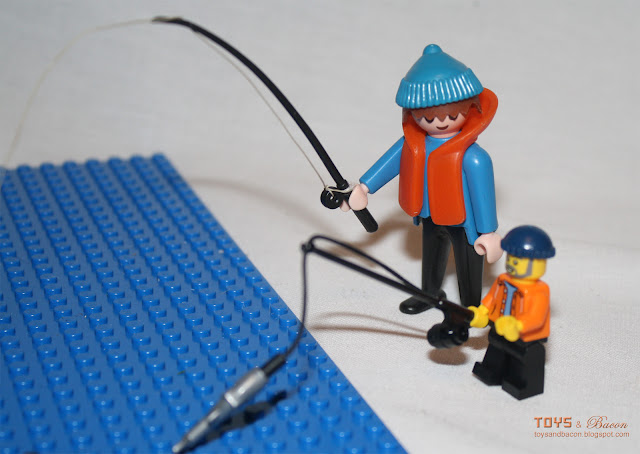 Today still, if I have the choice between Playmobil and Lego, I get more Lego of course, but I also see Playmobil in a different light.
They may have ridiculously outdated figure design, and they may lack any major action feature, but as far as I could see, they are still making a massive amount of really great toys. And there's no denying the quality of Playmobil. The fact that most of my Playmos are still alive could be attributed to my careful storage, as well as high quality production.
The concept of Playmobil, while simple in nature, is what lets us see some incredibly detailed and massive play sets and an extremely huge range of sub themes that as far as I know, only Lego can match. 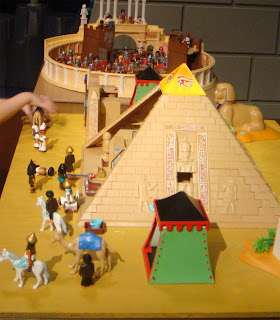 Plastic is getting increasingly more expensive, and we see a brand like Mattel being forced to adjust their prices. I'll be honest, I don't know much about the pricing on Playmobil these days. But the plastic Playmobil uses is of a decent quality, and they get the most out of it. I got to check it out recently, and even though that pyramid there is enormous, it's surprisingly light. 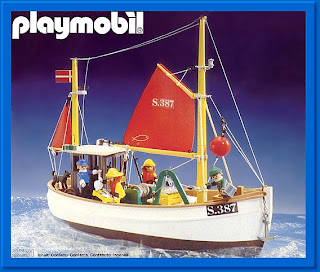 But Suzanne is not a new model. In fact, she was sold between 1983 and 1990. It's a good assumption to say that I got it in either 87 or 88. And all though it has seen better days (it's missing quite a few bits and some tool has doodled on it), it still impresses me. Actually, it probably impresses me more today than it did back then.
It actually looks like a fishing boat. But really, that's just the start.

First of all, it's made with a variety of materials. There's hard and soft plastic, the lower hull feels different from the upper. The boat feels extremely solid, without being too heavy. The anchor and chain is metal and of course all the strings and wires for the sails and various pulleys.
Then there's the details. Three different kinds of fish. All the hooks and handles. Working winch. A nation specific flag (at least for a handful of countries in central Europe). I've seen both German, French, Danish you can see above, and of course mine. The deckhouse has a removable roof, and the hull has a storage compartment. There's styrofoam in the middle of the boat to make it float, so kids could bring it in the tub.
And...
It came with a working engine. 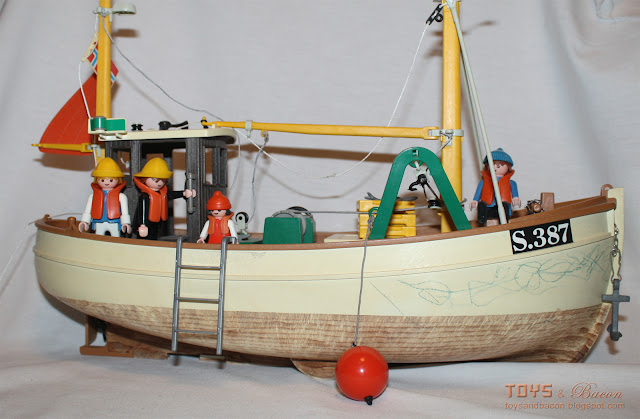 There's obviously a lot of thought put into making these toys, and I honestly hope they continue to make these wonderful models. Like I said, my opinion of Playmobil is divided. They're extremely detailed, well made and realistic toys with tons of play value...

But they're not Lego. 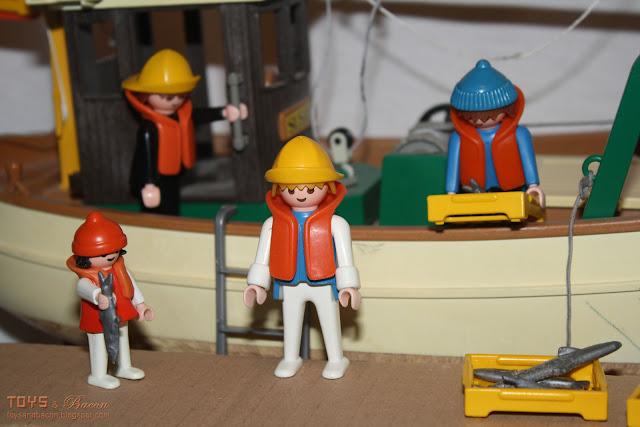 But hey, at least these people still look happy, even after being locked up for two decades.
Have a good weekend, people!

This is rather fascinating. I admire how you have taken care of your toys, and I like to read your stories, both about food and toys.

Playmobil rocks! I don't have any, but every time I see them, I want to buy them. My big worry is being sucked into another great collection.
GI Jigsaw