I stumble upon this vegetable from time to time on the web. It's a fascinating thing, for many reasons. You have all seen it before, but what some may not realize is that it's a great vegetable. It tastes good, it's very healthy and it can be used in many different ways. 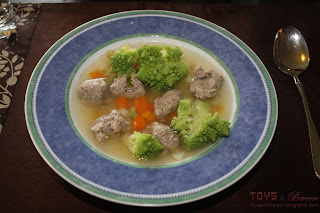 Read on for a very simple recipe for soup that probably will impress most people.

Fractals
A fractal is a geometric shape that's created when the answer of calculation is fed back into a new calculation. Or something. The geometric shape has repeating patterns and at any point in the figure, you'll see a structure identical to the big figure. It's probably some complex math thing, and if there's a subject I come close to hating, it's math. Probably because I suck at it, but I do know that these fractal figures became popular as soon as we got home computers, simply for the fact that the computer could both do the calculations required, and show the geometric figures in nice colors.
And some of these fractals are actually very cool to look at. 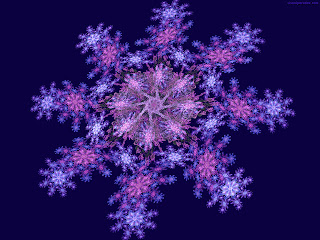 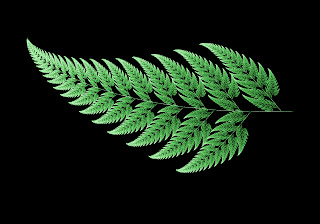 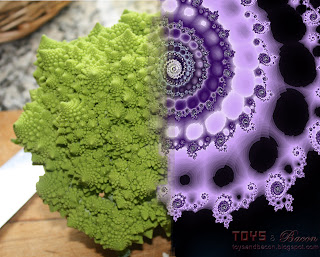 In nature we can see many things that resemble fractals, or the other way around. But snowflakes and leaves are not really fractals, they're just nature's way of organizing stuff. They are not "perfect" as a fractal should be, and if you zoom in, you'll pretty soon get to the end, instead of simply zooming in and watching a new copy of what you just saw.
The Romanesco Broccoli is a vegetable that kinda has that fractal thing going on. The segments look like smaller copies of the entire thing. 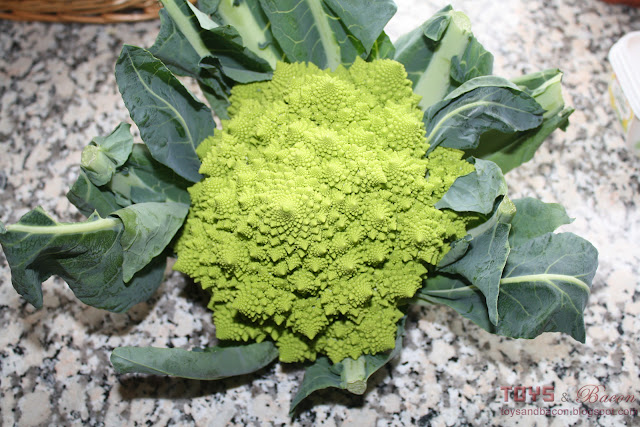 There's a lesson to be had from the true fractals. As you zoom further in, you'll obviously notice that the fractal is repeating itself. Now imagine that an additional digit was added to the calculation at any point. The structure of the entire fractal would be destroyed from that point on, or at the very least be altered.
Can this lesson be of any use in cooking? Well, I'd like to think so. But maybe not on such a delicate and accurate scale.
You know I like to wing it when I'm cooking. And more often than not, I don't follow recipes, I just throw stuff into the mix. Alterations to a recipe can definitely improve the meal.
But unwanted variations can make a difference for the worse. One bad ingredient can ruin an entire meal. A table spoon instead of a tea spoon salt. Too much flour. Mixing up spices.
I'm picky when it comes to my ingredients, and I usually use less salt than the recipe requires, rather to salt it afterwards. Mixing up spices can definitely go both ways, but some spices are just meant for specific types of ingredients. Try using pepper instead of ginger in your gingerbread cookies for instance... 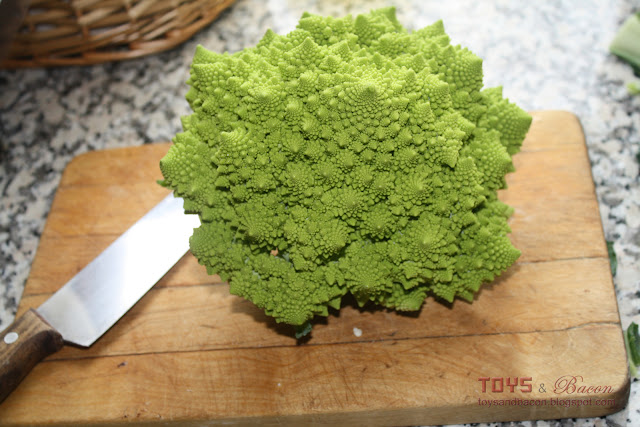 The Romanesco Broccoli, as the name implies, comes from Rome, and has been known for at least 2000 years. It's more than likely that people have known about this vegetable for just as long as the "normal" broccoli. Even though it's called "broccoli", it has just as much in common with the normal cauliflower, at least when it comes to taste. I have it as a mix between the two, maybe slightly leaning towards the cauliflower side.
In fact, the romanesco broccoli tastes really good. Both raw, parboiled and boiled. It shouldn't be boiled for too long, as it will get soggy and sad. It ended up tasting a lot sweeter than broccoli, milder than cauliflower, yet it had some nut flavor. It was definitely very neutral, and I can see it being more versatile than both broccoli and cauliflower.
In the following recipe, I use it for soup, but as you will see, when cut into bits, this will make a great snack along with good sour cream and garlic dip. You could also make a gratin of it. Fractals, mushrooms, onions, béchamel sauce, maybe bits of chicken/fish, cheese on top, into oven. 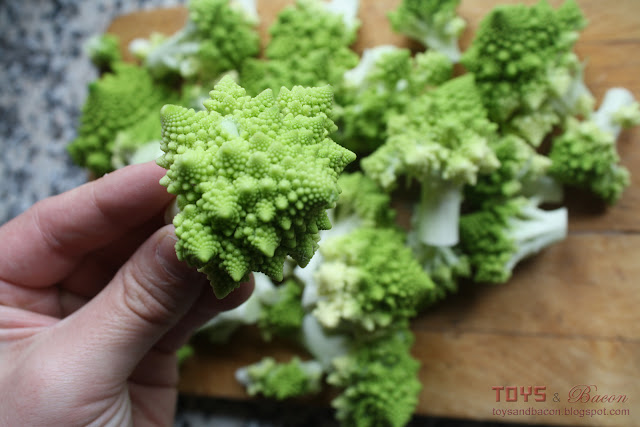 Fractal Soup
Ingredients are water, minced beef, fractals (romanesco broccoli), onions, carrots, bouillon, preferred spices, salt.
This recipe is pretty simple. Start with separating the "flowers" from the core of your romanesco broccoli. You will be left with a few really big pieces, many mid-sized and a few really small. If you want to, you can split the biggest ones, or simply add them a bit earlier to your soup. 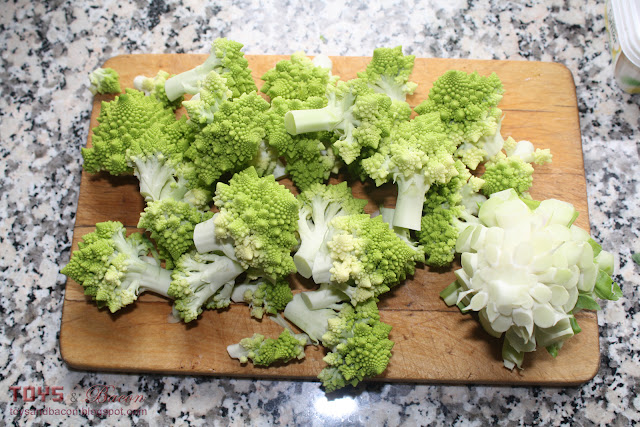 The core was a lot softer than let's say the stem of a broccoli, so I simple cut it in small bits and added it to the base of the soup. I also cut up a few onions and some carrots. Fill up with as much water you want, add the spices you want, a cube or two of bouillon and a spoon of salt. 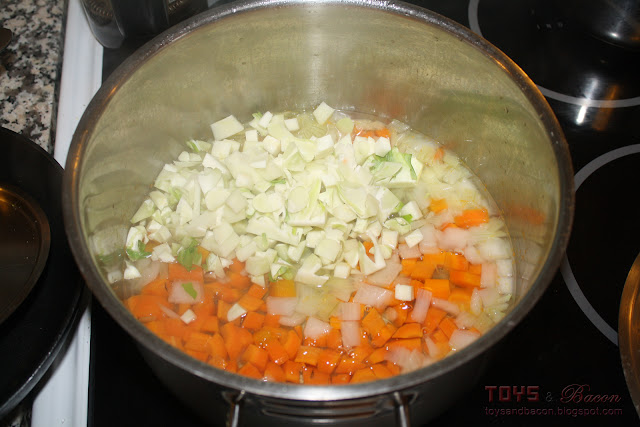 This should boil for a while, so let us take a look at the fractals in the meantime. It's easy to see that the smaller bits are just copies of the whole, but it's also very apparent that it's not as accurate as you'd expect a fractal to be. But something that amazed me was that I had a hard time finding two pieces of identical size, just as with a fractal. Also, split in half, a piece had the same core/stem as the bigger piece had.
Such a mesmerizing vegetable. 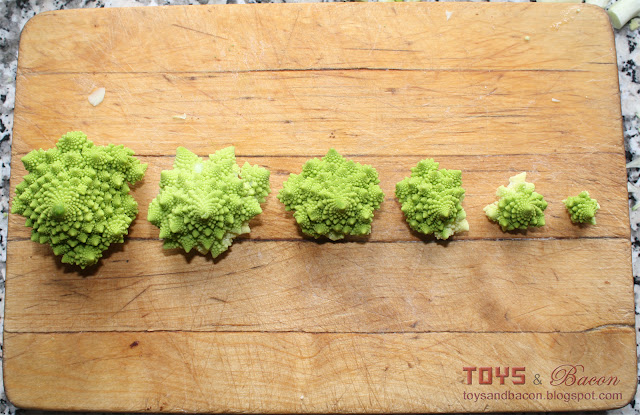 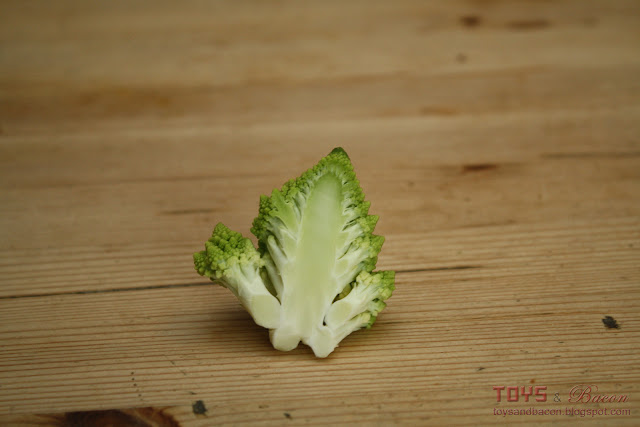 Enough playing around, time to add some substance to our soup. At this point, the onion and carrots are soggy and hopefully simply disintegrated, making a broth, a base for a soup. You could eat it at this point, but we'll add both fractals and meat.
First add the romanesco broccoli, then the minced beef in tiny balls. When the meat balls are done, the soup is done. 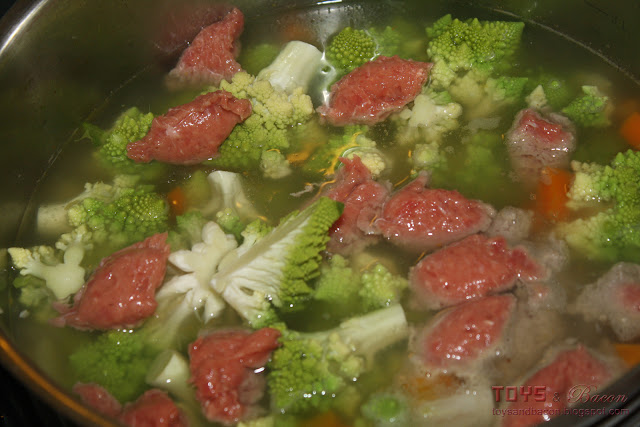 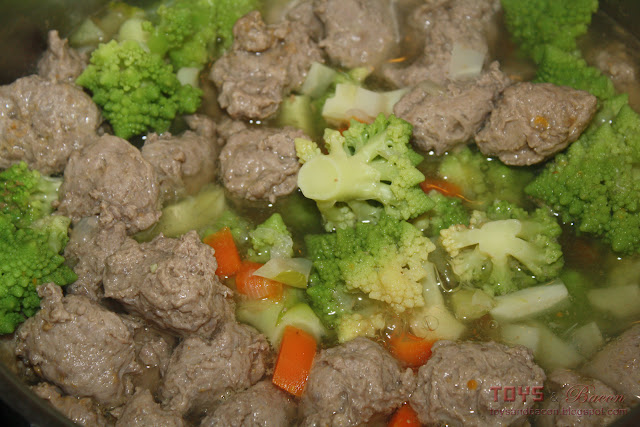 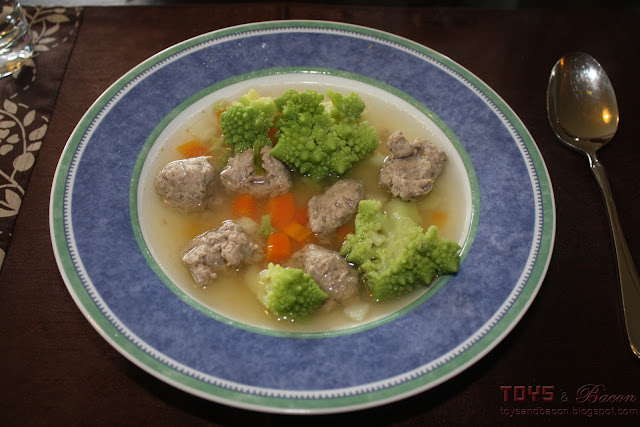