Ocean Week: The Monsters of the Sea

When you're in the ocean (and you have a fairly active imagination), even the smallest fish seems a bit scary. But when you think of it, we treat the ocean with far less respect than they did before.
Ever since man began creating tools, the ocean has been a place that gives life - and takes it.
Now, we just eat fish, make the occasional boat trip, and it's no big deal. If we do swim in the ocean, stuff like jellyfish and seaweed are a minor annoyance.
It's not like it used to be, when you had to make sacrifice to the gods so the Kraken wouldn't sink your ship. Or that you go through intense rituals to have good catch.
The ocean still inspires us, it still gives us great food. I guess we just take it for granted. 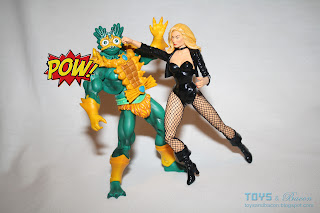 Read on for.. I'm not really sure what this, but read on anyway!


The ocean is important to humans in many ways. Obviously for food (I'll get to this in a bit) and other natural resources, for travels and for the increasingly fragile climate. But there's another aspect of the seas that has been relevant for humans, and that is the stories, the way we were fascinated by the ocean, the way we had to construct myths and tales about what lived, what possibly lived and what hopefully didn't live in the ocean.
You've all heard about Poseidon, Neptune. Greek and Roman god of the ocean. In Greek mythology, Poseidon is borderline villain, and for a good reason. People needed someone to blame, an explanation when their family and loved ones got lost at sea.
It's the same with all the monsters that have been blamed for sinking ships.

Like I said, all this has given us great stories - which in turn gives us great toys!
Meet the monsters of the sea! 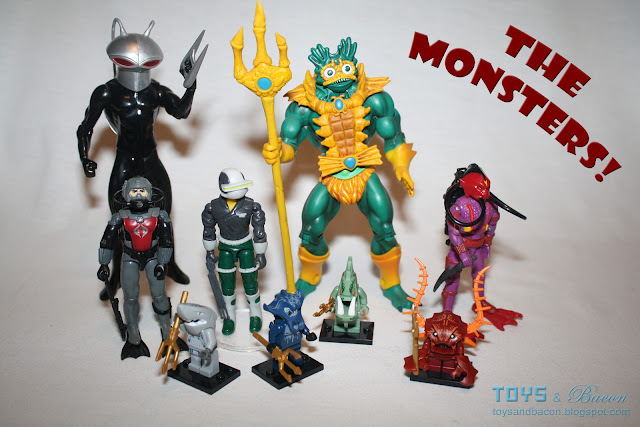 They are: Black Mamba (DC Comics), Mer-Man (Masters of the Universe), Cobra Eels, Decimator and Hydro Viper (G.I. Joe), and four Lego sea monsters.
Of course, we have the opposing part consisting of Teela (Masters of the Universe), Black Canary (DC Comics), Wet Suit (G.I. Joe) and some Lego divers.
Even though I have called them "The Heroes", you are welcome to chose your preferred side in the upcoming battles! 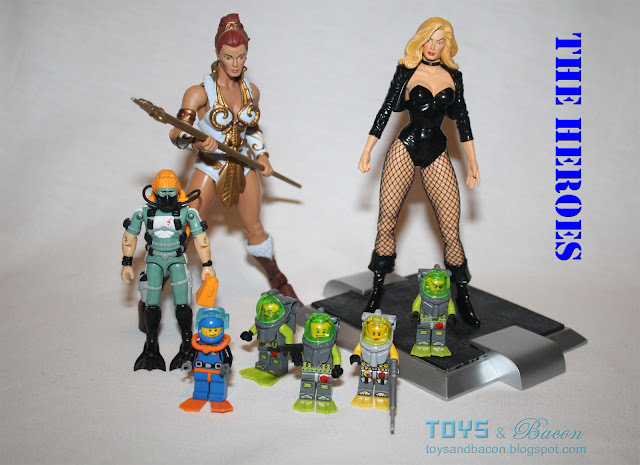 Yes, you heard me, the monsters and the alleged good guys (and girls) will do battle!

I can see you're wondering about a few things. First of all, both Teela and Mer-Man are from the new Masters of the Universe toy line, but they were both among the original 8 Masters of the Universe toys, and based on the 200x cartoon, I actually have them as arch enemies. If you have seen the first or second episode, you'll know what I'm talking about.
Most my ocean themed G.I. Joe figures are at the museum, so these were all I could find.
And finally, I just couldn't find my Aquaman. I know he's somewhere, and I looked all over my place for him. Superman and Batman couldn't care a single bit about Black Mamba, so I pitched him up against Black Canary... Or did I?

I see no reason why we can't mix universes...

Now, before we get to the battles, I want to get back to the part about food. I'm a fan of seafood. I grew up eating various dishes made by fish - and have continued to do so. I have always liked shellfish, and I'm getting increasingly better at making sushi.
But if there's a favorite, it's the whole fish thrown on the bbq. I'm not sure if it even matters what kind of fish it is, I just like the way of preparing the fish. Sadly, I have yet to master this - may be because it's always raining here,  could be because I don't really have a proper grill, I don't know.
Ever since a vacation in a Greek island, I have wanted to replicate what is probably my most memorable dinner. And I'm so glad that I actually captured the plate: 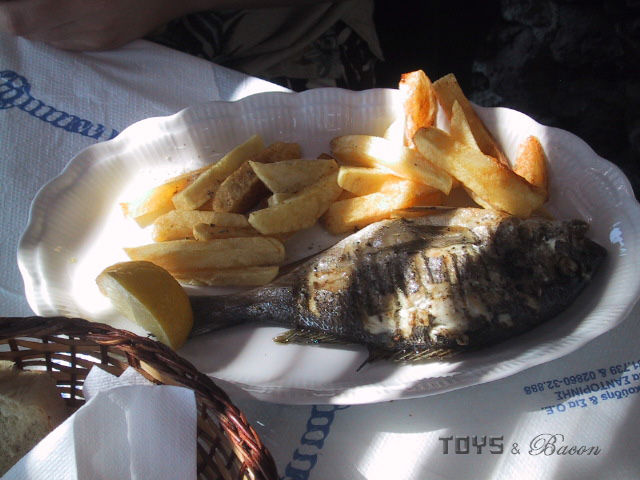 This was a restaurant literally in the sea shore, and we could sit there watch as a guy went out in the ocean with a harpoon to catch what I assume would be dinner later that evening. And it's the best fish I've ever eaten.

And here's a recent attempt to recreate that meal. 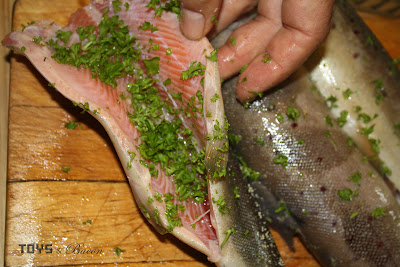 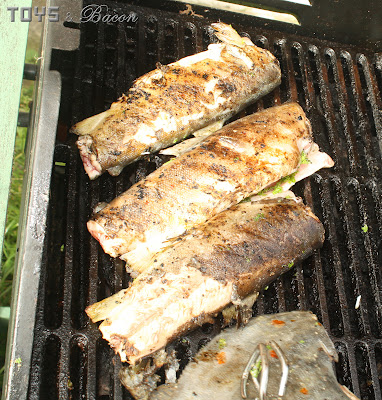 It was good, sure. But not how I remembered the grilled fish on the shores on the island of Santorini.
I won't give up though.

Back to our fantasy battles, it seems that the universes are completely mixed up. Lego's facing off against G.I. Joes, Masters of the Universe are up against Cobras, Lego dudes have to meet DC villains!
I'm just going to let you all cheer, narrate and enjoy. Because toys are just like the ocean, meant to inspire, to satisfy our need to imagine. 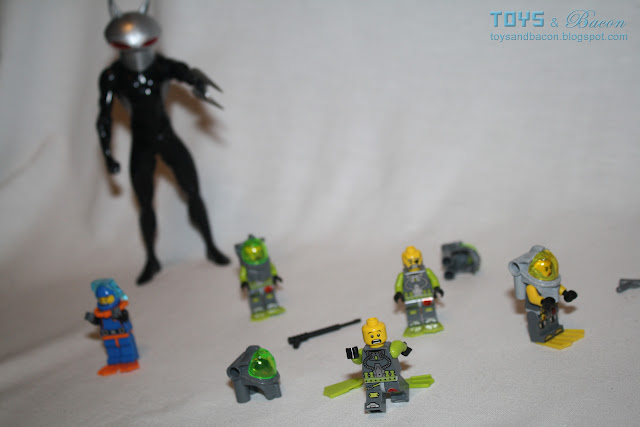 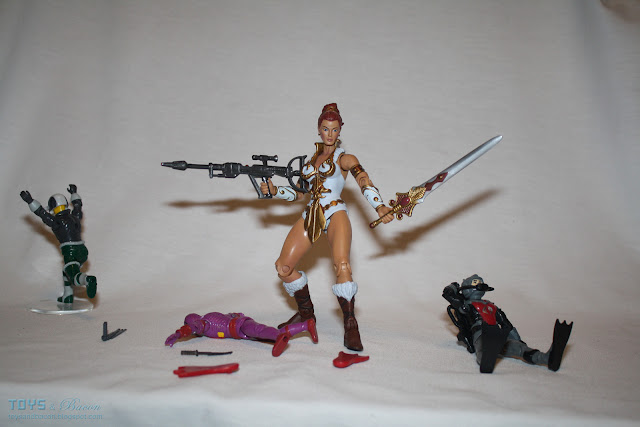 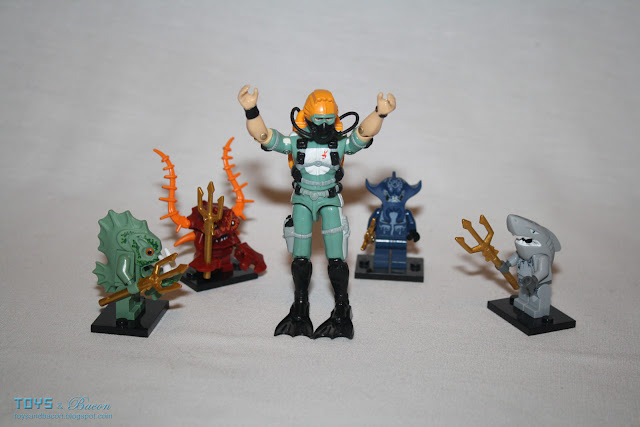 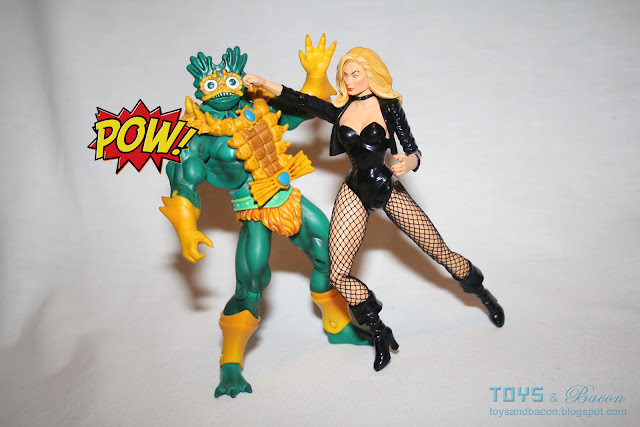