My first Figure Friday featured a G.I.Joe jet, and today, I'll take a look at another aircraft, namely the Tomhawk.
Released during the height of A Real American Hero in 1986, the Tomahawk is considered one of the greatest toys from the 80s. 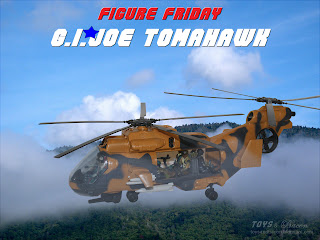 Read on to find out exactly why...

When I started the Figure Friday - with Ghost Rider, the Phantom X-19, I talked a bit about what G.I. Joe was all about, and for you who are still curious, I suggest you check out that article.
But there are some things worth bringing up here, before we get to the Tomahawk. I'll name drop quite a few toys here, check out resources like yojoe.com if you want to find out more about the toys. I would like to show pictures of all of these myself, but most are at the museum, and some I simply don't own at all (like the Terrordrome and the USS Flagg).

Things happen a lot more quickly today. A toy line may be planned out ahead, but toys are being released a lot more sporadically, and with the modern G.I. Joes it's actually hard to follow what and when stuff is being released.
Back in the 80s, we got a yearly line up of figures and vehicles. That was it, no surprises (other than the occasional lack of certain figures). We usually knew in advance what was coming out, or we could see the entire line-up of that year on the back of the figure cards.
The figures in G.I. Joe - A Real American Hero began filling the shelves already in 1982, but it wasn't until 1984 the toys got really good. Some will argue against this, but it's the truth. The line-up from 1984 is amazing when compared to that of 82 or 83 - the figures are more detailed and varied, the colors are brighter, the vehicles are more extreme, the characters are crazier.
But the 1984 line-up pales when compared to what would follow the next 3-4 years... G.I. Joe would just get progressively better. There's a reason this toy line is revered today.

I'll definitely get back to the 84 and 85 toys, but today is about a helicopter from 1986.
This was the year the original G.I. Joe figures from 82-83 got a serious reboot. Basically all the important characters from the early years got reinvented.
In 1986 we saw a new laser trooper, from 82s Flash to Sci-Fi, we got a new diver from 83s Torpedo to Wet Suit (which you could see during ocean week). Roadblock replaced Rock n Roll as a machine gunner, Lifeline replaced Doc as a medic, Dial Tone replaced Breaker, Iceberg stepped in as arctic trooper for Snow Job and Hawk got a new outfit. Cobra got a new leader in Serpentor, as well as new troopers in the nameless and anonymous Vipers.
Here are a few of the 1986 figures. As a a challenge, I'll let it be up to you to name them. 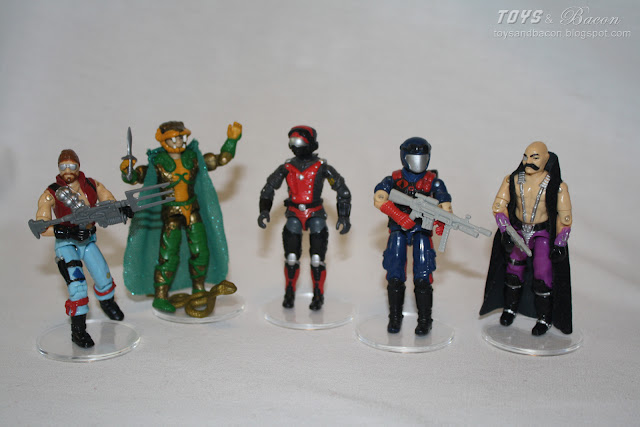 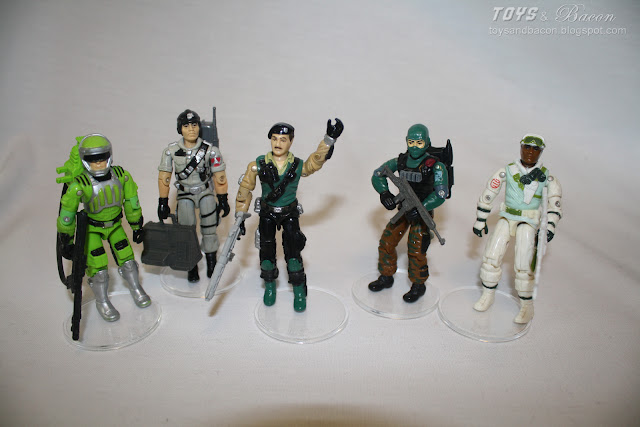 When it came to vehicles, 86 was probably not as good a year as 85 (which had both the USS Flagg and the Cobra Moray Hydrofoil - Quite possibly the two best vehicles in this toy line), but still far better than any other toy line that year. We saw the massive Cobra battle station Terrordrome, the delightfully dangerous and intentionally impossible Stun and the comparable HAVOC. We saw two great planes in the Conquest X-30 and the Cobra Raven.
And finally, the mighty Tomahawk. 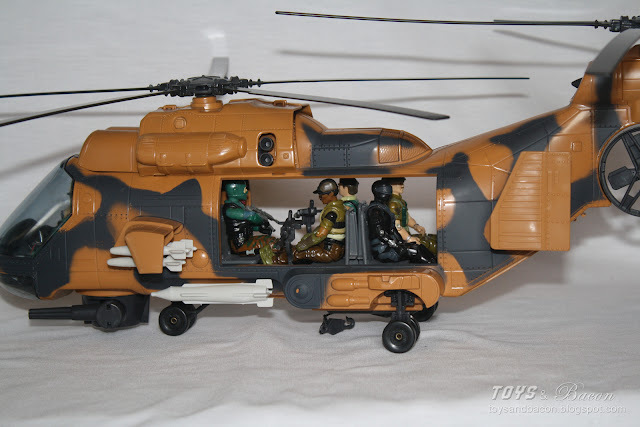 From the start, there was a certain sci-fi element to G.I.Joe. You had the various lasers and jetpacks, and very early on we started getting different types of space-crafts. Most of this technology seemed very far fetched and unrealistic, but the fact is that almost everything we got to see in the G.I.Joe toy line was more or less based on actual prototypes.
Tomahawk, along with the F14 Skystriker and the carrier ship USS Flagg are definitely leaning towards the more realistic side, while most of the Cobra vehicles were of a more experimental design.
The Tomahawk looks like something that could work. From those giant vents to cool off the engine, to the way the rotors are placed. It looks functional and realistic. Obviously, like all Joe vehicles, it's not exactly in scale with the figures, but that's something we have come to expect.
It is reminiscent of the Boeing CH-47 Chinook. An amazing helicopter that's still being made, even after 50 years of service. The Chinook is 30 meters long. A helicopter of this size scaled down to 1:18 would be something like 1.5 meters. 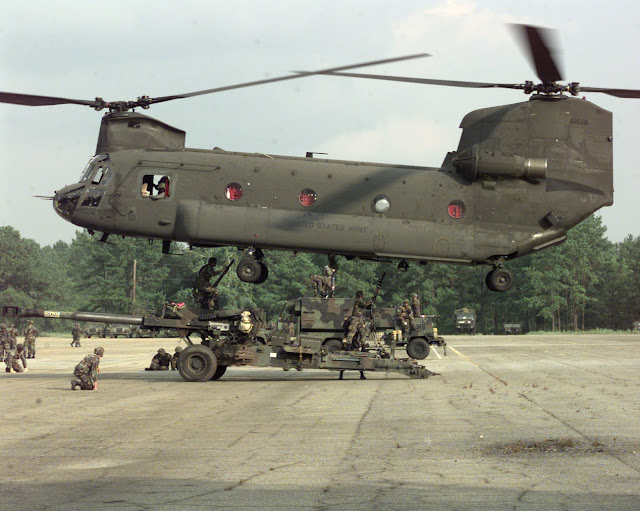 Still, the Tomahawk at ~50cm has a a decent size, and small kids would definitely have to use both hands holding it. 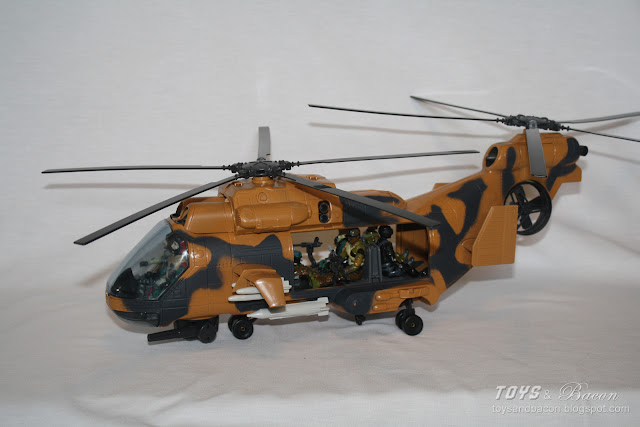 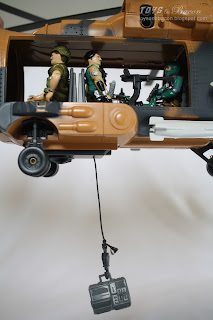 The TV commercial states that the Tomahawk could hold 8 figures, and this was something that always impressed me as a kid. The ability to store many figures was a sign of quality in a vehicle. The already mentioned Cobra Stun was a totally mad vehicle, basically guns on three wheels, and it could hold something like 15 figures - which was a good thing, even if they in reality would all die the second the Stun started it's engines.

The Tomahawk on the other hand, seems like the kind of vehicle where it makes sense to store figures.
It has a storage room, with 5 seats, in addition to the two seats in the cockpit. I assume the 8th figure is supposed to hang from the lifting hook.
If you want to, you can simply cram the storage room full of Joes. As soldiers, they are used to intimate quarters.

Another challenge for you readers, can you name all the dudes who travel with the Tomahawk here? 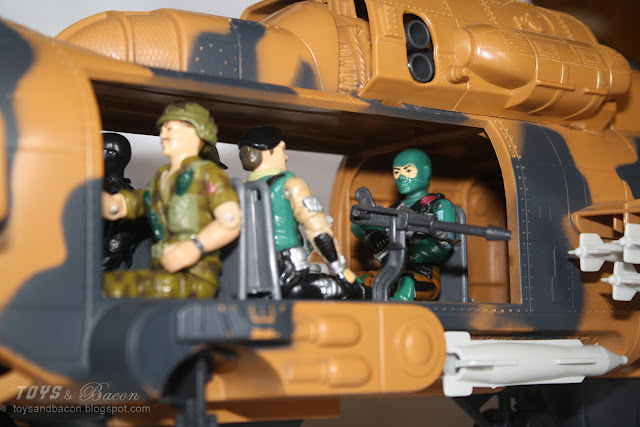 The Tomahawk is a simple toy at first glance. It's just a camouflaged  helicopter with two rotors.

But when you start looking more closely, all the details emerge. The ramp that opens and the removable seats make the storage room capable of holding smaller vehicles. The two swiveling machine guns add to the play features, as does the retractable lifting hook. All three rotors are of course rotating, and the tiny one in the rear even has a slight pivot effect. The engine covers below the front rotor are both removable, all though I don't think I'll ever try that, in fear of breaking a tab.
For armaments, I've mentioned the two side guns, the Tomahawk also has 6 detachable small missiles, two larger torpedoes and a big turret below the cockpit. What looks like a basic transport helicopter comes fully loaded for action.

Details to notice: The two pairs of wings, the transparent section in the lower parts of the cockpit, the small exhaust ports near both main blades, working wheels, sculpted rivets and panels all over the helicopter. This is truly a good looking toy.

In the comic, the Tomahawk debuts in issue 49, where the Joes attack Springfield. A monumental issue that clearly has the new helicopter as something really bad ass, carrying the equally cool "assault team". 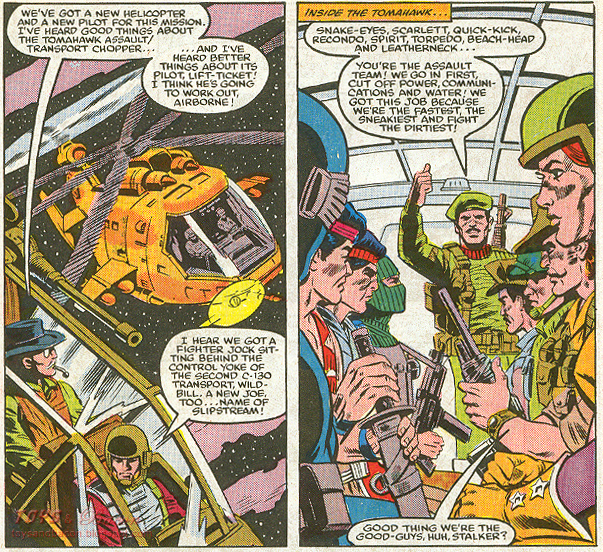 Over the course of the next 100 issues of the Marvel comics series, the Tomahawk sees regular action, and all though it's mostly used as a transport, Lift Ticket shows on occasion it's offensive abilities. 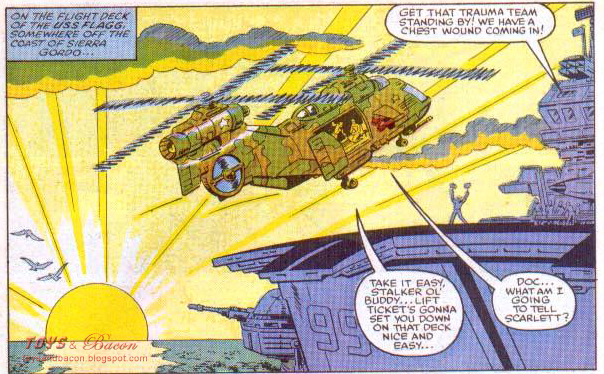 Back to the toy, we should take a look at cockpit. There's a huge transparent canopy that opens up, where two figures can sit (all though probably not comfortable). Slipstream doesn't look too excited, but Lift Ticket is smiling, as he always do. 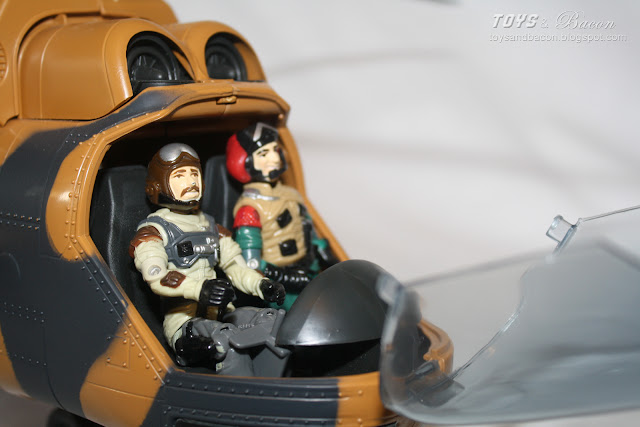 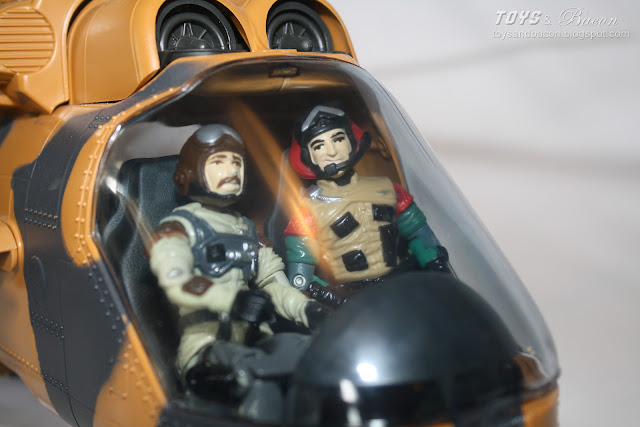 It is absolutely amazing, I cannot get over how cool this toy is! 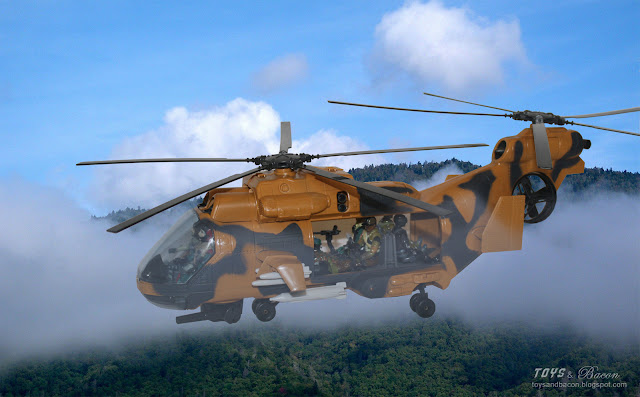 What a way to start the weekend!
Posted by Jon at 7:00 AM