First of all, I promised toys all week, and I'll definitely keep that promise. Secondly, I got inspired by the Eurobricks forum that currently has a "underwater month" - to do my own themed week. So it's Ocean Week here at Toys & Bacon, and I'll start off with some Lego. 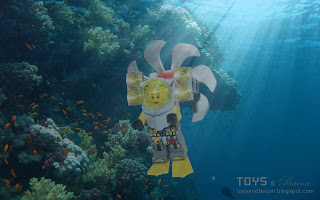 Read on for a few anecdotes and enhanced pictures of Lego!


As should be obvious, I like to fill my spare time with hobbies. I rarely sit around doing nothing (all though to some it can easily look that way - hey, reading about various subjects and then write about them counts as doing something...)
If you have visited this blog before, you know that I'm interested in toys and food. In addition to this, my main hobbies revolve around music and comic books. I also follow a handful of sports - and I participate in a few of them on a very ordinary level.
I could probably focus my spare time even better to make time for more hobbies, as there are quite a few things I'd like to do. For instance, I do have a diver's license, and I really enjoy both scuba diving and snorkeling. But sadly, I haven't been submerged for at least a year. That being said, I have a few stories about diving to share.
Feel free to skip the next few paragraphs if you're only here for the Lego...

When I first learned to dive a few years back, we were making practice dives in a local fjord. It was narrow and deep, but we were obviously only playing around near the shoreline. In addition to it being cold and dark, there was also the element of thrilling and scary excitement. I have a good imagination, and I pictured something ancient and gigantic living in the bottom of this fjord.
I did not get eaten by the Kraken or the Magnathorax, but I believe there are things living below the surface that we're not supposed to see, that we should hope we never meet.

0.01 Nautical miles out and 11 fathoms down we hit bottom. Obviously not the bottom of the fjord, as it was rapidly getting deeper. But we touched bottom and started carefully looking for treasures. This place was right out from a small harbor and we were met with a rather interesting, but sadly not surprising sight. The ocean floor was filled with trash. We found bicycles, shopping carts, bottles, all sorts of small pieces of junk.
I had a small bag, as I intended to bring back anything of interest. I was diving in the ocean, I expected to find WWII era gold bullions, 16th century rapiers and the remains of lost explorers.
What was the only thing I found (barely) worth bring back to the surface?

Some dude had been practicing his drive from the harbor, and the the ocean floor was littered with golf balls. I took back one as a souvenir of my first aquatic treasure hunt.

A few years earlier I was visiting the Tenerife with my extended family. A buddy of mine was also tagging along. Tenerife is actually nothing but a volcano a few hundred kilometers outside Africa, but it has the usual tourist traps you'd expect from the Canary islands. Me and my  buddy had never tried it before, but for some reason, we suddenly found ourselves clad in newly bought wet suits and the proper gear to do some serious snorkeling. I've been free diving and snorkeling quite a lot since then, but being in the coral reefs in Tenerife was still the greatest underwater experience I've had. Such a colorful place, such life. It was a huge and shallow field filled with countless species, most of them I couldn't recognize, some of them I couldn't even identify as life.
Sadly, this place - a local brought us there - probably doesn't exist any longer. They were constructing dozens of hotels on the beach, and the rocky surface where all the life thrived were to replaced with sand and ignorant tourists.

The local we had with us was an excellent swimmer, and even without fins, he easily outswam us. Me and my buddy still insisted on following him, as it seemed like he knew where he was going. Suddenly the comfort of the shallow corals and the colorful life had ceased... Below us, the ocean floor rapidly declined into the dark abyss, and in front of us was the vast, deep blue Atlantic Ocean. We resurfaced to ask our local what was going on here, surely there was no point continuing out in the open seas, and we had no chance of reaching the bottom. Actually at this point, we couldn't even see the bottom, let alone anything of interest.

Then our local told us why he had brought us here. He pointed out to the open sea and said:
"That's where they are..."
"That's where what are?" 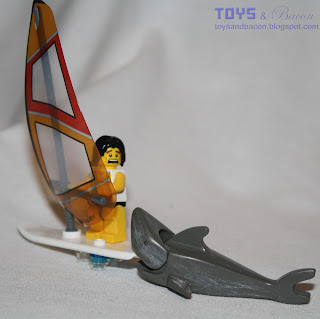 Straight out there. If we squinted while submerged, we could see them. At least that's what our imagination told us. Suddenly the empty ocean didn't feel empty at all.

Enhancing pictures of Lego
I talked a bit about it a couple of days ago, building Lego in good company. Me and a few friends assembled the space shuttle last year. This year we brought out 4-5 big sets during our annual surfing trip. Among them was the Creator lighthouse, the Marina cafe and the new Atlantis temple. I never took good pictures of them until now, and I thought why not try out my photoshop skills. This is a program I'm in the process of learning, and it's a slow process. But I feel that every time I use it, I pick up a few new tricks.

Creator Lighthouse
This one was the first I made. It should be fairly obvious that this was not a huge success, but I guess you learn from your mistakes. I should have placed it on top of actual rocks, because now it just looks like it's floating in the ocean. I also tried to give it a color filter to make it look like the Northern Atlantic Ocean.
The Creator lighthouse is a marvelous piece, with a light brick that actually makes sense. The details are cute and it comes with a mini-figure. This is something I hope they continue with the bigger creator sets. We love the mini-figures. 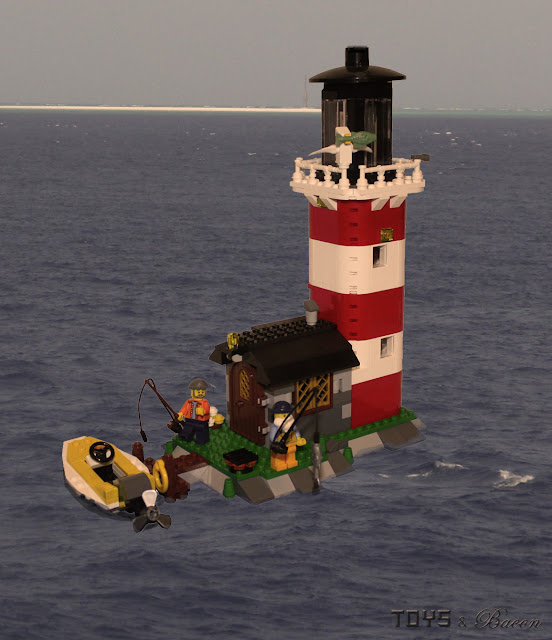 Scuba divers and boat
The next was the boat that came with the marina cafe/harbor. I'll probably dedicate the entire Figure Friday to the marina, as it's such a fun piece. It includes a cafe/shop and a guard house with a four wheeled bike in addition to this boat. It also includes a handful of mini-figures - the wind surfer a few scrolls up being among them.
The boat is simple in build, but I like the details, the way you can store the additional scuba gear and the twin engines. For some reason, I feel it should have been white or green instead of blue.
With this image I tried to have one diver partially submerged, but it ended up looking a bit wonky. I guess I should have added ripples in the water. If anyone has a good way to do this, let me know. 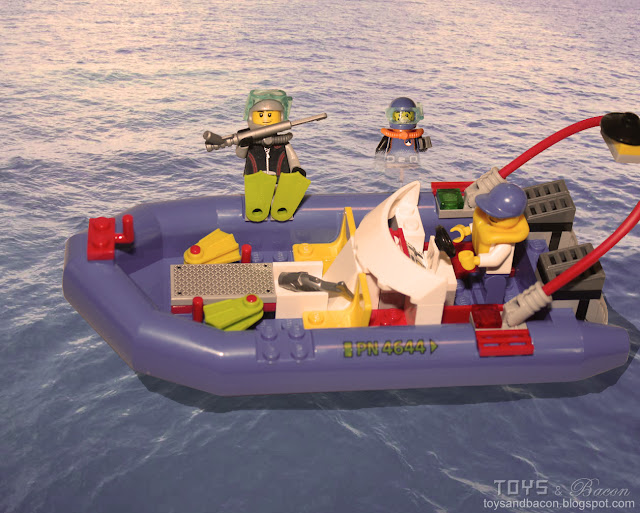 Diver and the reef
Here's a diver from the new Atlantis line. They changed the color scheme from red/translucent green to red/translucent yellow. It may sound like a minor change, but the result is that the mini-figures don't quite match up with each other. They've also cut down on the monumental, transforming submarine vehicles that dominated the previous Atlantis line, which is a sad thing. Because who doesn't love gigantic underwater transforming vehicles? Other than that, I kinda like the colors of this diver, the lighter gray and yellow match up in a good way. The gigantic propeller seems a bit unnecessary, as I assume it would take just slightly less than that to give the diver underwater propulsion.
I also toyed around with a feature in photoshop called "lens flare". I see that the propeller should have had a rotating effect. Again, I am pretty clueless to what I'm doing, but if anyone wants to share their experience, go ahead. 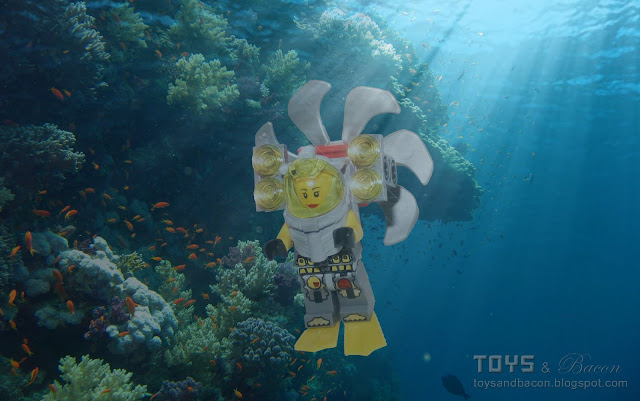 Atlantis Temple
Finally, the big, sunken temple. Not as big as the one from the previous Atlantis line, but in my opinion a far superior Lego model. You still have a good selection of traps and hidden places, and the clean design - definitely Ancient Greek looking - just appeals to me in a way the previous model failed to do. I've added a diver from the last Atlantis line so you can see the difference in colors I talked about.
When it came to learning photoshop, I tried with duplicating the ocean layer here. I was trying to give different depth perspective to the diver and the temple. I believe I succeeded, but once more there's probably a better way to do perspective and I appreciate any advice. Should I for instance have duplicated the ocean floor on top of the temple, with a high transparency to give it some sort of refraction effect?

What the poor diver doesn't know is that I've hidden no more than three dangerous sea monsters inside the temple, so he should make the wise move and stay away from the treasure.
Go pick up golf balls near the local harbor instead, dude! 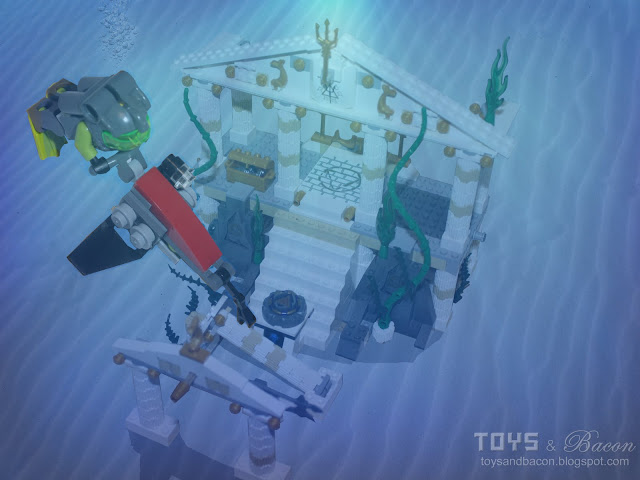