What is a bread? Baking the Impossible Bread

One of the most fun things you can do in a kitchen is to challenge yourself. I've mentioned it before, it doesn't have to be a big change, or a mighty challenge... but it can be.
I'm known for asking the following questions when I cook:
How hard can it be? and What's the worst thing that can happen?
Remember that people have made bigger mistakes in the kitchen than you will ever make, and that if you're lucky, you may just stumble upon new tastes, new recipes, new dishes. If you haven't tasted it yet, it may potentially be your next favorite meal. Think about that.

Today I'm trying something entirely new. I'll take what is a tailor made, and very specific recipe, and I'm going to make something completely different with those exact ingredients. In the text that follows, you'll see me making a bread that shouldn't exist. In fact, even though it looks kind of cute, it's the worst bread I've tasted - and I've tasted some really awful stuff. 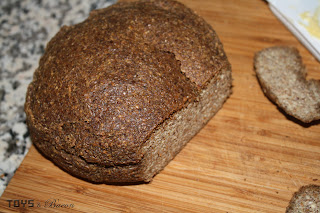 Read on if you want to find out what a bread really is, and how to make the impossible bread!


A month back, I showed you how to make crisp bread. This was very well received by most readers, and why wouldn't it? It's a simple and good recipe, that just also happens to be healthy.

But there are always those who are never satisfied, and I had a guy actually telling me, pointing it out in big, capital letters that "THIS ISN'T BREAD!"
He was right of course, it wasn't. Which is why I carefully tried to distinguish between what I called "real bread" and what the result of the recipe would be: "crisp bread".
I tried to comfort him, saying that there was preciously little separating the crisp bread from normal bread. All I had to do was to add yeast to the ingredients, and bake it.
Of course, the main problem this guy had, other than not having a single clue about bread at all, was that he had never heard of "crisp bread". 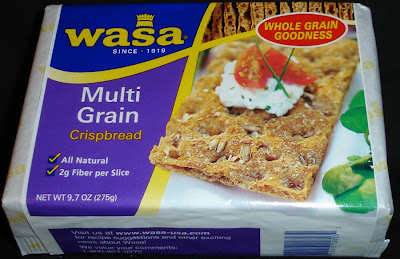 Crisp bread, or dry bread is bread made without yeast. Most bread up until fairly recently were made without yeast - think pita bread, taco shells, flat bread. With a far superior storage potential, it made sense to bake bread like this in the past.
The reason this dude was confused was probably because crisp bread is more a phenomenon in Northern Europe. I won't claim to know in full details about the bread habits of North America, but from personal experience, and by talking to my American friends, I can with good confidence say that we have more tradition for eating bread in Europe, and in particular the country where I'm born.
We grew up eating slices of bread for breakfast, at school and in the evening. It was usually brown bread or rye bread. Something like this: 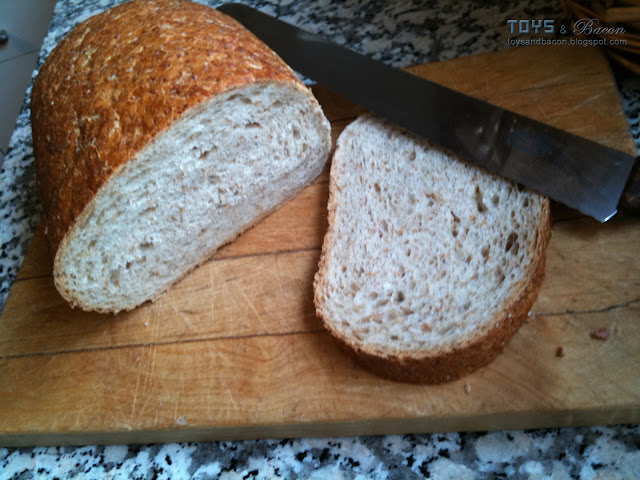 Or, when I make it myself, something like this: But ok, the guy admitted he didn't know what he was talking about, but I was still curious. I had to find out what bread really was. And more importantly, I had to prove to myself that I could turn the ingredients for crisp bread into "real bread" just by adding yeast.

Here's the ingredients for the crisp bread.
900 ml water
300 g seeds
100 g bran
3 table spoons of psyllium husk.
1/2 tea spoon of salt
Obviously I can't use all that water, but other than that, I planned on following the recipe. I also wanted to use the exact same seeds I used in my crisp bread. Sunflower, linseeds and sesame seeds. 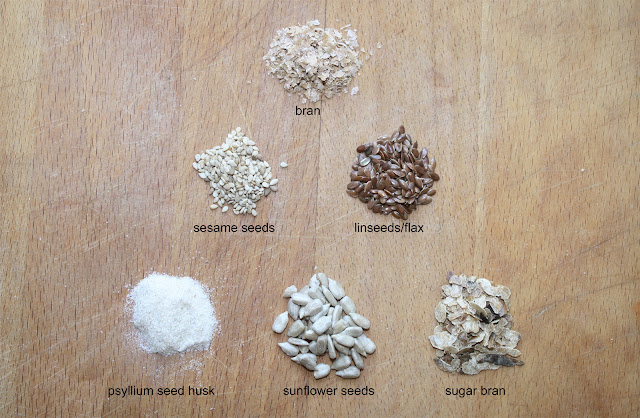 Can this be turned into bread?
Well... Wikipedia defines bread as something that's made by flour and water, often with additional ingredients. Basically, the mix between flour and water, baked in an oven would make something that can be called bread.
When I make bread, I usually add yeast, salt and oil, and I try to mix a few different types of flour, but the base is wheat flour.
Flour is actually any seed that's ground to powder, but there's a reason we like to use wheat as the base. It has the right attributes, and the most important of them: gluten protein. Gluten (think "glue") is what makes the dough sticky, giving the bread its taste and structure.
I would have no wheat flour in my bread, and I knew very well what I'd end up with. If I was lucky, there was enough carbohydrates for the yeast to work with, and the bread wouldn't end up like a brick hard lump of undercooked dough with the taste of grass.
There's probably a chemical explanation why the wheat is preferred over sunflower seed flour when you make a bread, but I'll leave it with "wheat flour works, sunflower seed flour doesn't".

But here's me making the impossible bread:
First I had to grind my seeds into powder. I used the coffee bean grinder. Something I did not expect to happen was that the seeds gave up surprising amounts of oil and fat when I ground them. I did not get a powder like flour, but rather something like moist sand. The linseeds gave up most oil. 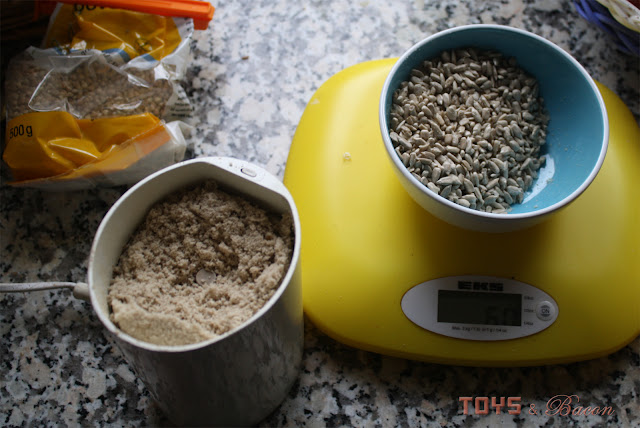 Then I added water and yeast, and a tiny bit of salt. 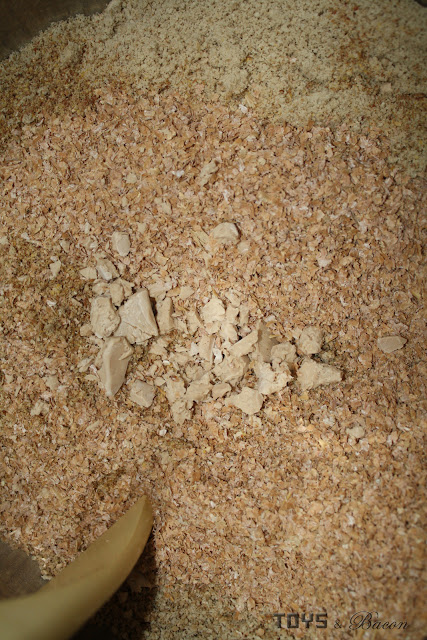 Now came the time to let the dough go through the leavening process. I could have used baking soda or something, but I hoped the yeast would be enough. It actually worked, and the dough rose an additional 50%. Far from the normal bread, but at least there was a result. 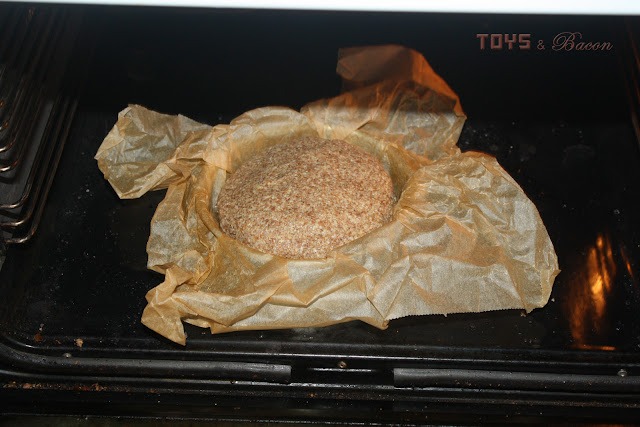 And finally, I baked it. And here's the finished product. Looks like a bread, doesn't it? 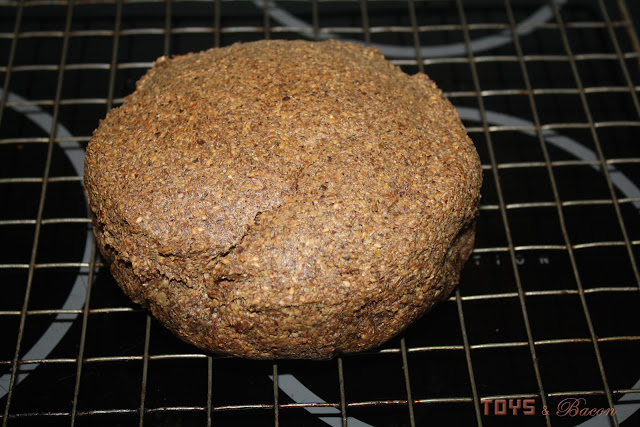 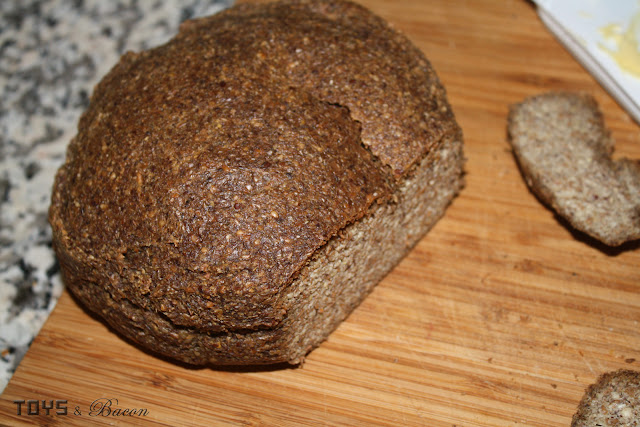 To answer my own questions: How hard can it be? Well, it wasn't that much harder than to make normal bread. Grinding the seeds was a messy process, but other than that, it was simple.
What's the worst that could happen? Well, I could of course end up burning down the kitchen, but I'm thinking of the food. The worst thing that could happen is that it's inedible.
This bread was definitely not inedible.

But it wasn't particularly good either. It was in fact awful. It tasted grass and was way too fat.
Now, I can actually picture someone liking this, the same people that drink herb tea and eat celery.
I tried my best to salvage it by cutting it to bits and dry-roasting it. No success either, as it still tasted like grass, but now with the added texture of wood.
I proved two points: I could make a bread out of the same ingredients I used to make crisp bread. And more importantly: sometimes, your experiments will make you appreciate the well-tried and familiar even more.

You're from Norway, right?