Those who know me is fully aware that I'm a Marvel fan. In fact, by simple proximity, people will understand I appreciate the Marvel heroes. It started at the age of 6 when I read Marvel Heroes Secret Wars. The impact of this series was monumental. I'll get back to this. It escalated when I went to high school and found vintage US issues of Daredevil and X-Men at my local comic store. It peaked when I studied at university and subscribed to 20 titles monthly. I don't buy that many comics these days, but I still pick up the occasional issue or trade paperback, and I anticipate every Marvel movie.

Why is this boring biography of a random dude necessary? Because even though I'm a Marvel fan to the point where I literally wear it on my sleeve, and even though I own thousands of action figures, I have a surprisingly ordinary amount of Marvel action figures. One of them is the archer clad in purple, always far too confident and always the underdog. A decent toy of an excellent character. 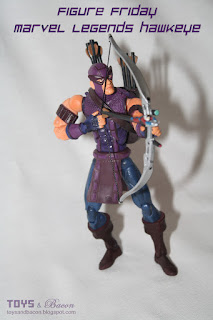 Comics
If I had to choose a favorite among my Marvel action figures, it would probably have to be Hawkeye. While he's not the most famous of the Marvel heroes, he's definitely one of the best characters. And the Marvel Legends line gave credit to this character. Who is Hawkeye, you ask?

Again, the bio of Hawkeye is easily accessible on Marvel.com, Wikipedia and probably thousands of other places on the internet. But let me go quickly through it anyway.
Hawkeye is a superhero in the Marvel Universe. His real name is Clint Barton, and he's usually associated with the team Avengers, fighting against evil alongside Iron Man, Captain America, Scarlet Witch, Wonder Man, She-Hulk and several others.
Hawkeye is an archer, every superhero-universe needs one, right?   In the regular Marvel Universe, he's extremely skilled, but not the supernaturally skilled, like we see in his Ultimates version. To a lesser degree than Green Arrow from DC, Hawkeye still uses various trick arrows.
During the 70s and early 80s, the Avengers was a really enjoyable comic book, slightly more humorous than other Marvel titles, featuring non-apologetic superhero action. Characters like Wonder Man, The Beast, Ant Man and Hawkeye were all fan favorites because of how they were written in the Avengers.
This cover is from 1982, issue 233 of the Avengers and a perfect example of why Marvel ruled the bronze age of comics. 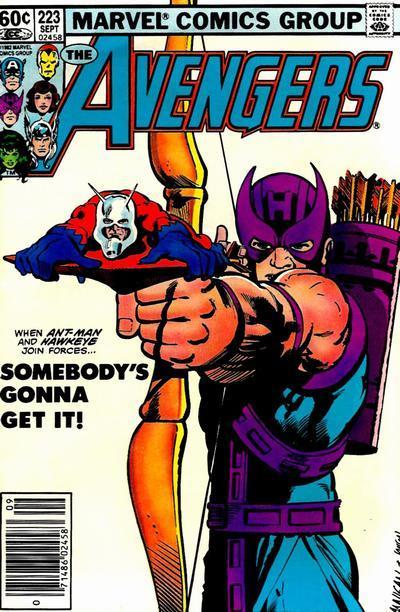 At some point, Hawkeye started his own branch of the Avengers - The West Coast Avengers. This started out as a miniseries of 4 issues, before it began as a regular series lasting for over hundred issues. For most of this run, Hawkeye was a team member and occasional leader.
Today, Hawkeye is featured in various comics in the Marvel Universe, but is probably being best represented in the comic Hawkeye & Mockingbird. Written by recent Eisner Award winner Jim McCann, this should contain everything you need of cool quotes, extreme archery and general superhero fun. 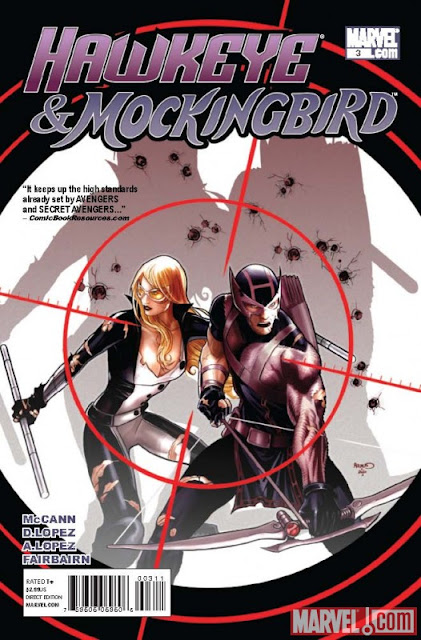 Secret Wars #8, which is actually the best known issue of this series for entirely different reasons, was my first encounter with Hawkeye. I read that issue over and over, and it became the foundation for my fascination of the superheroes. The issue features a massive battle between the heroes and the villains. At one point, the villain known as Piledriver comes charging at Hawkeye, who shoots him with an arrow. Simple and effective, and forever imprinted in my mind. 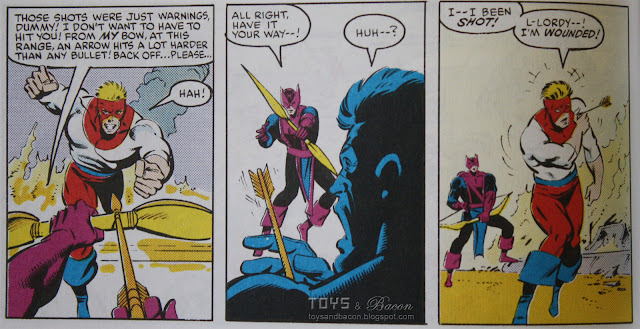 There's something real about Hawkeye. He doesn't have any super powers, he's cocky and confident, but can also be greedy, selfish and impulsive.
In some ways he's a borderline anti-hero. One that doesn't really possess the abilities and personalities you attribute to the classic hero (let alone super hero), but he's still someone you end up rooting for.

Toys
The Marvel Legends line was produced by Toybiz and later Hasbro from 2002 up until recently. It was in the 6 inch scale, meaning they are a few heads taller than the figure from the previous Figure Friday. In a very clear contrast to what was usual in the mid to late 90s, Marvel Legends feature tons of articulation. Almost too much. But this set pretty much set the standard for action figures to come over the next years, and quite effectively killed off the "stactions" (action figures with close to zero points of articulation, more similar to small statues than toys) that were common in the 90s.

Marvel has recently seen that kids prefer smaller toys, and has focused a lot more on their 3 3/4 inch figures, but at the height of Marvel Legends, we got some amazing toys. The Galactus that were featured in the entry about Genever was from this line. 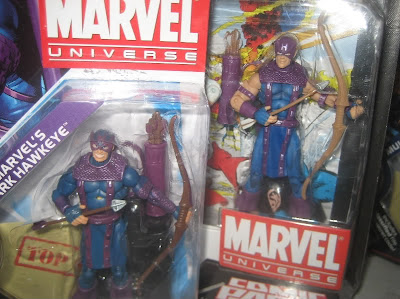 The above are not Marvel Legends, but the smaller scaled Marvel Universe action figures. They are recent releases and are probably excellent toys. I think the grinning dude is the insane villain Bullseye in Hawkeye's costume. I'm not sure what it is, but I think I'd like my Marvel heroes to be of a bit bigger scale than 3 3/4. And I actually prefer my Marvel heroes to be inside the comics and not in toy form. Which really makes no sense when I can have both. But there you go.

When it comes to Hawkeye, I'm at least satisfied with the toy I have. The Marvel Legends Hawkeye has our hero in his usual costume. He has had various changes to his costume over the years. Some very subtle, and others extreme. But none of them has stuck. Why would they? He has probably one of the greatest costumes in comics. Not often does purple tabard and floppy boots look this cool. 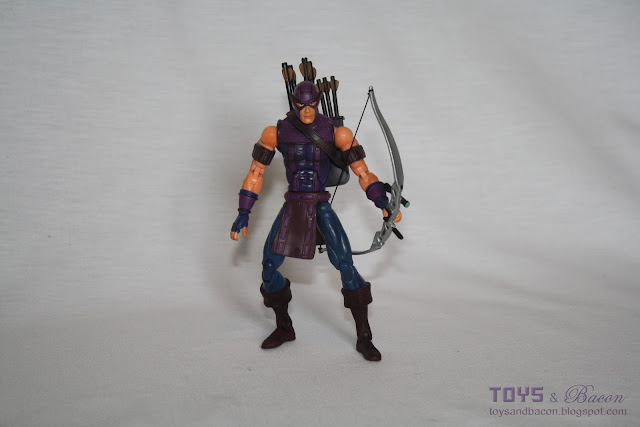 The toy features 50 points of articulation. I didn't bother to count, but I assume the number is correct. Actually far to many for my taste, but that was the style of ML. Hawkeye also comes with bow, arrows, quiver and the Jet-cycle he was known to ride in the comics. What really delights me about this figure is the fact that he can actually (almost) hold his bow in firing position. I guess that's where the million points of articulation comes in. His costume is also flexible, letting him sit, jump and do generic action poses.
The quiver has some arrows that are non-removable, as well as four loose ones. Three of them are different trick arrows, without really making it obvious what's what. The final arrow is the winner, and really makes this toy special. We get the arrow with Ant-Man clinging on, ready to be fired into action, just as we saw on the cover of #223 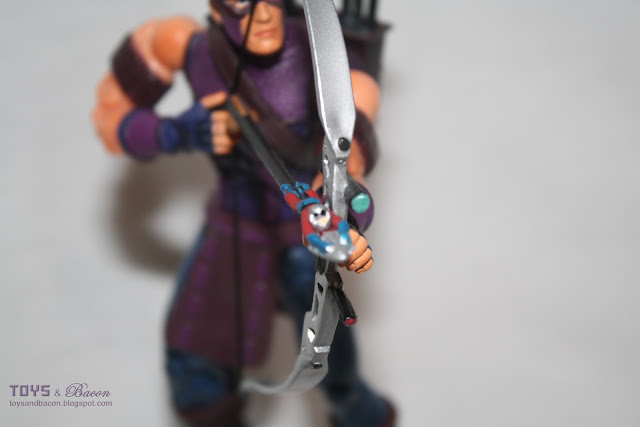 TV and Movie
I was sufficiently delighted to see Hawkeye in a very prominent role in the new and excellent cartoon Avengers - Earth's Mightiest Heroes. Again we see him as a very skilled, yet very human character. We also got tons of great archery action, as well as the money shot, where he fires off an arrow carrying Ant Man. 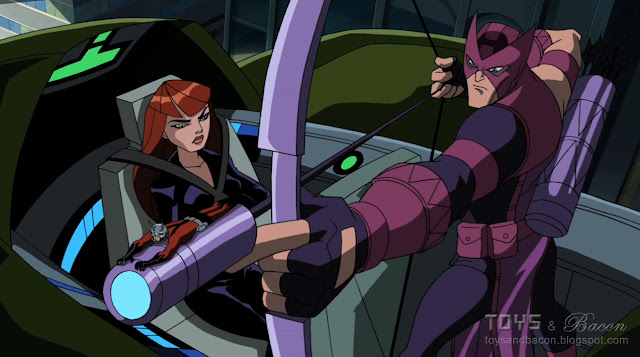 I also expect Hawkeye to be an important character in the upcoming live action Avengers movie. Of course, ever since his first appearance in the mid 60s Hawkeye has never been a B-list character, but he has almost always been under the radar, and far less known than his fellow avengers, Iron Man, Thor and Captain America. The Avengers movie will probably not change this, but he'll hopefully be a bit more known to the general public, and such a character deserves nothing less.