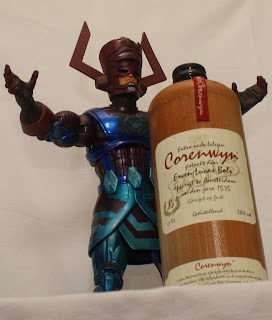 What's going on here? Read on to find out why The Devourer of Worlds is amazed by a ceramic bottle.

Alcohol
When you start out drinking at the age of way too young, you have no idea. You drink with a purpose - to get drunk. Already you've got a problem, when the purpose is to experience the effect, you don't care about the taste. Another thing is that your taste is constantly evolving, especially when you are young. As you get older, I assume your taste is becoming duller, just like your other senses.  I assume this will have an effect on what you prefer to eat and drink. And most importantly you do not realize that there's actually amazingly good things that contain alcohol.
I'd like to hear from you all, what your favorite alcoholic beverage is. I assume there's just as many favorites as there are different sorts of alcohol. Some prefer beer, some prefer wine, some like fortified wine, some like liquor. I have favorites within each genre,  and today I'll show you my favorite liquor.

The Genever
The history of the Genever spans back a few hundred years, and like so much else, it started its life as a waste product. Feel free to fact check me on this, because as usual I'm writing by heart.
After distilling malt wine, the waste product was a spirit at around 50%. This was mixed with strong-tasting herbs just to make it drinkable. Juniper berries tasted strong enough, but it was also believed to have a healing quality. But they said this about anything from Coca Cola to cigarettes too, so you know...  Over time, this waste product became popular and gained a life on its own.
Today, Genever is assoicated with Netherlands  - a country I mentioned a few days ago. Some may think it's related to Geneve - the city in Switzerland known for watch making. But the fact is that the name derives from the French word for the juniper bush, guinevere.
Toys
Galactus is a universal force. He is the one that eats planets, not necessarily because he wants to, but because he has to. Some see him as the one that sorts out the balance between life that has been and life that will be, while others simply see Galactus as evil. Either way, no one can argue that Galactus has an appetite, which makes a toy version of him oh-so-relevant to this blog. 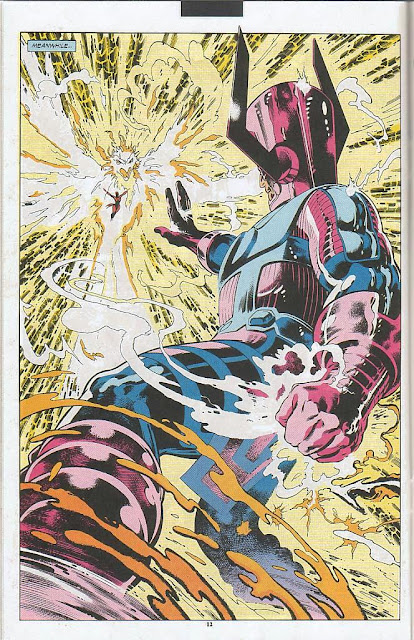 For some reason, Galactus usually tries to eat inhabited  planets. Maybe he does eat any planet, but no one cares when it's not inhabited. Maybe he only eat planets with life because they taste better. He ends up eating the entire planet, so I guess  doesn't really matter if there's life there or not. As you can understand, Galactus is on a rather intense diet, lots of heavy metals and rocks.

Galactus has understood the proper way of enjoying genever: After a heavy meal. The genever may not be as well known as Cognac, or the not at all distant relative, Whiskey. But it's still a high quality liquor, and can be enjoyed (responsible of course) outside the time constraints of dinner.  Even The Devourer of Worlds is in awe of my liter-sized ceramic bottle of Bols.  As you can see, this is an "Extra Oude Belegen". Clearly this means it's extra old and vintage... or something. 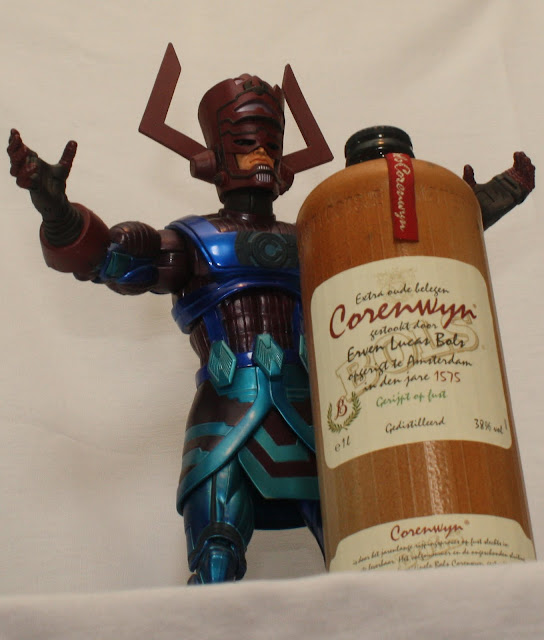 This wasn't really about Genever, or planet-devouring villains. Both will definitely star in future blog entries many more times, so rest assured, you fans of lovely liquid or gaudy galactic giants, you'll have something to look forward to.
Food
Yeah, the oranges inspired me, I made some juice (and have continued to do so), and I thought for myself "if oranges are good to eat and drink, why can't I use them in a sauce for my dinner?" And while I'm at it, why not add the berries that even the mighty Galactus is known to enjoy? 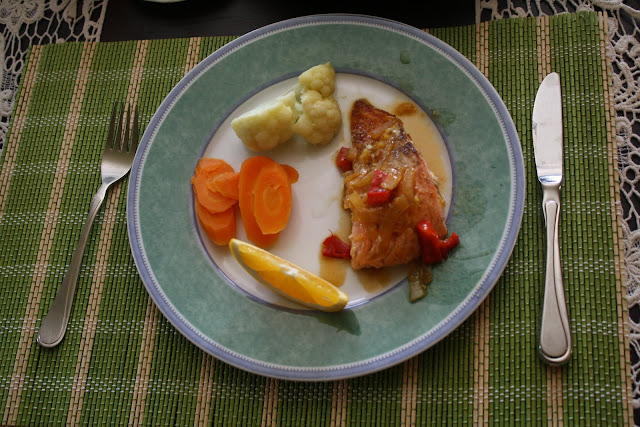 This is basically a pan-fried piece of trout, with some vegetables. The difference here is that I made a sauce out of oranges, juniper berries and a bit of soy sauce. Fried onion made the base, then I added the orange juice, some sweet pepper, the juniper berries and soy. A perfect balance of sweet from the onion and pepper and sour from the orange works perfectly with fish. The soy adds a bit of edge to the flavour, and the faint taste of juniper made the trout really something else.
Enjoy people.
No, wait...
Enjoy, people.
No need to eat planets when you can enjoy food as good as this.
Posted by Jon at 2:51 PM