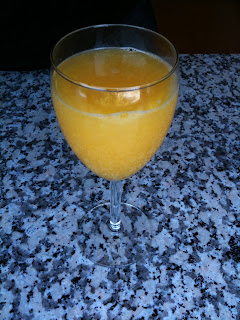 I normally don't drink juice. But it's both delicious and easy to make, it's weird that I don't make more juice. A stroke of luck left me with a bag of oranges, that I not only ended up using for juice, but also for dinner. Today is about the juice though...

Read on for recipe, more pictures and other stuff...

Also, are there anyone out there that has even the slightest knowledge about juice making, let me know, shoot me some advice and recipes!

For some reason, the dutch people have a strong connection to the orange color, and while this has little to do with my juice, other than the fact that I had some really great orange juice in Amsterdam, it's still kind of interesting.
Since I'm actually a historian, I'll try to write this by heart, without checking any sources. Skip a few paragraphs for the literally more juicy bits.

The Netherlands is a kingdom in Europe. It's tiny, it's flat, they have a tradition for cheese, they have a strong football team and they ride bicycles. And most importantly in this case: like many European nations, they have a rich history intertwined with the neighboring countries.
Back in the year 1200, there was a small town in the south of France called Orange. Since it was French, they probably called it Le d'Orange. Now, this was the time when a large part of Europe was called the Holy Roman Empire. This is not the true Roman Empire, mind you. It was just a bunch of old dudes clinging to their powers. And since people still hadn't learned to read and write, they had no saying in what happened.
The town of Orange was placed under rule by a French duke named Frederique of Orange. Freddy and his ancestors had complete control over Orange, up until the 1500s, when the Prince of Orange, René died with no suitable heir, only daughters. He had left not only his title, but his entire town with the surrounding area to a distant relative, a kid from way up north named William.
At this time, let's say 1560, the town of Orange was basically a tiny independent state smack in the middle of southern France. And if you believe this was one of a kind, you're actually wrong. There were hundreds, if not thousands of these tiny states in France, as well as in Germany, Italy and most of the European countries, all trying to keep their own land from becoming part of something bigger.
What separated Orange from other nearby tiny states was that it now was governed by a family that supported the protestants. In the middle of Catholic County! This was a big deal, and they probably fought a war or two or ten. William, Prince of Oranje, became popular in his original home town. His battle against the catholic church in southern France made an serious patriotic statement, just as the Kingdom of the Netherlands was founded. William and his relatives were appropriately made rulers of the new kingdom. Billy Orange made waves in other countries as well, and it's said that the orange stripe in the Irish flag comes from their admiration for the House of Oranje.
Speaking of flags, Netherlands currently have a flag consisting of a random mix of red, white and blue, but back in the day it actually had an orange stripe. It's a bit too easy to blame this on a color blind dude working at the royal castle, or that they envied all the hundreds of other kingdoms with the standard flag colors. Personally, I'm more inclined to blame this on the usual suspect: Sun damage. A sworn enemy of plastic toys, as well as fabric. The orange flags simply faded, and at some point in history, all the people had forgotten what color they really were.
Except the dutch people have far from forgotten. Orange is very much still their national color, and the House of Oranje is still "ruling" the kingdom

What this has to do with the fruit, I have no idea. But here's what happened the other day when I made juice:

My sister forgot some oranges at my place, and while I usually never eat oranges, I certainly don't mind them either. How traditional, to have a glass of orange juice alongside my breakfast!
I'm prefer juice that's slightly bitter and a bit sour, so I figured a lime would make it a bit more interesting. 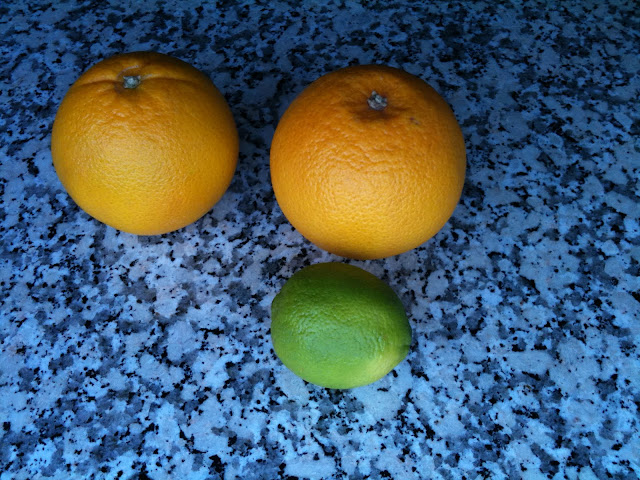 I realized I know surprisingly little about oranges. I barely know where they grow. Italy? China? I know it's a citrus fruit, and it's extremely common. I'm guessing most oranges go to juice, and I assume there's several variants of the species.

I can't claim to know where my oranges come from, or what kind they are, but only by going to a different store, you'll find oranges that not only look different, but taste different too. Is there a season for oranges? Of course there is. Somewhere in the world, there are always oranges growing, but even they will taste sour before they are ripe - and sweet when they are past their prime.
These were neither on the too sour or too sweet side, but I really had nothing but my preference for orange to compare them with. 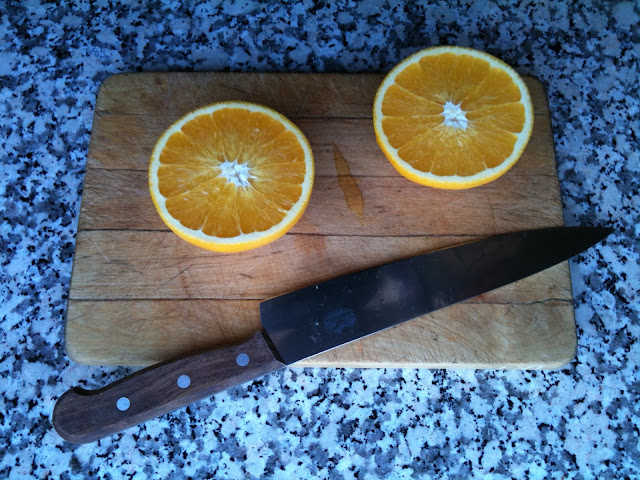 I guess you can squeeze the oranges by hand, but there are several devices of different size and complexity to help you out. Mine looks like this, and is unnecessarily complicated.

The recipe for one glass Orange Juice (with lime) is obviously very simple:
1 Orange
1/2 Lime

This made exactly 200 ml - or a normal sized glass of juice. 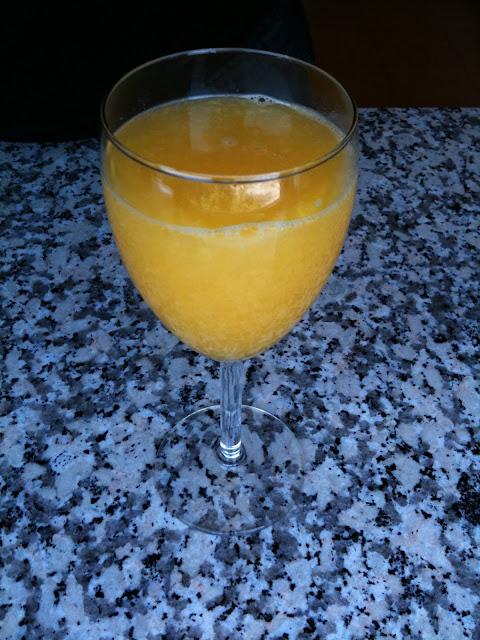 Great start to the day, and next time I'll experience with spices or additional fruits.
Posted by Jon at 10:26 AM