I had planned this to be only a short recipe, no toys, no anecdotes. But you know... Things doesn't always turn out the way you hope. 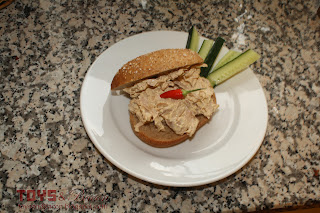 Read on for chili chicken sandwich recipe and some randomness on the tiny red robot that was not as popular as the tiny yellow robot. 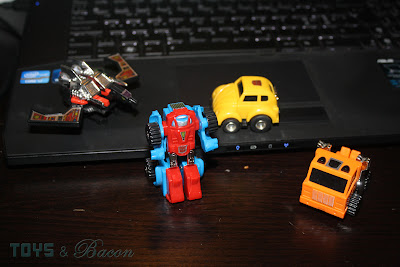 I was playing with my tiny robots literally minutes ago, thinking about what to write today. You are of course recognizing the yellow VW, the "human element" in the Transformers universe. His name is Bumblebee, and he's hero of the Autobots, particularly in the comic and the live action movies. He's tiny, weak, doesn't have any noticeable skills. Which are all basic human traits. And while all Bee's buddies are awesome sport cars or huge utility vehicles, he's a 5 horsepower 80 year old car that will get outrun by your average scooter. All this makes for a great hero. I'm not kidding. That's why Spider-Man is a greater hero than Superman. You're supposed to identify with Bumblebee, and the fact that he's kind of a weakling is actually reinforcing the human element.
The other robots are naturally Gears (the red and blue), Huffer (the orange truck), and Lazerbeak (the bird thing).

These specific toys are all re-issues, but over the years I've owned at least three G1 Bumblebees. But I have never owned a Cliffjumper.

Who's Cliffjumper you ask?
We are of course in the Generation 1 Transformers Universe. Cliffjumper is an Autobot, the good guys. The one that could have become popular, but for odd reasons remained the simply the occasional comic relief, if not simply just forgotten. 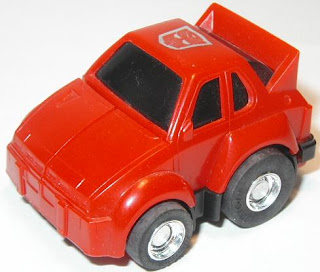 This is the Generation 1 toy version of Cliffjumper. He's very similar to Bumblebee, except he seems to be a different car, and red.

In the comics made by Marvel, Cliffjumper was not featured a lot. In fact while Bumblebee can be seen as one of 4-6 main characters throughout the entire 80 issue run, Cliffjumper appeared in maybe 10 issues in total.
Bumblebee had entire issues dedicated to his character, and was from the very start the natural link between the humans and the Autobots, and was a trusted friend of Optimus Prime. 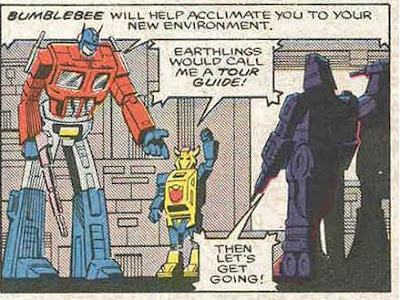 Cliffjumper, on the other hand, was always simply a supporting character. With so little panel time we didn't even get a sense of who the character was. That's natural, after all the comic was supposed to sell toys, and they had to cram every single Transformer in the comic. Some of them had to be stuck with two panels and one line.

In the cartoon,
Cliffjumper had a bigger role, with quite a few defining moments. Sadly, most of them are as the comic relief. But he is presented to us as a young, overly confident troublemaker.
In the very first episode of the cartoon, we see him firing off an enormous gun, despite the advice he gets from his older, more experienced buddy, Hound. 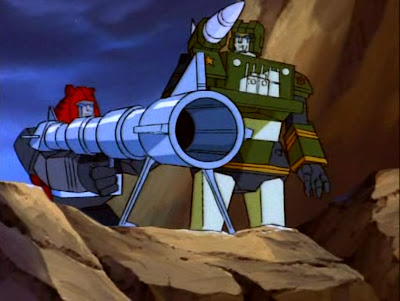 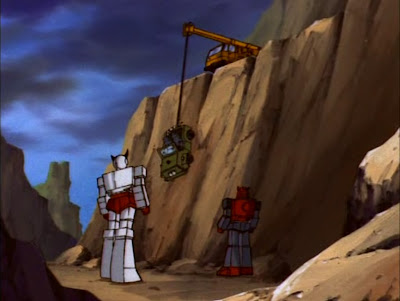 Cliffjumper ends up getting Hound in big trouble, while he himself escapes.
In recent media, they have shown Cliffjumper in a similar way, but given him a slightly more heroic role. But he's still tiny, he's still unsuccessfully aspiring to be a bad ass, and he's still very much in the shadow of what now should be the second most famous autobot: Bumblebee.

Chili Chicken Sandwich
But this was actually about a simple home-made chicken sandwich. I was hungry one evening and had half a grilled chicken. Obviously, there's infinite possibilities with grilled chicken, but as my stomach growled like an angry wolf, I had to respond ASAP!
Picking bits of the grilled chicken, chopping them up in more manageable bits. Adding mayonnaise and chili sauce. Heat the sandwich or bread in the oven for a little while, making it warm and crisp. Enjoy with salad of your choice. 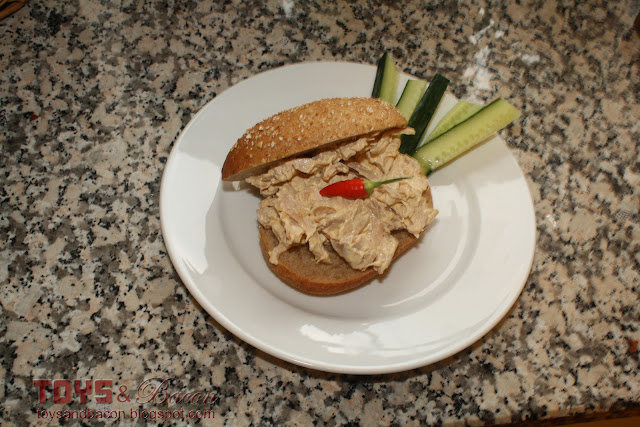 And if there was a comparison to Cliffjumper, the tiny red Transformer, it was the tiny red chili in my sandwich.
You see, I got two tiny red chilis from my sister. She had grown then herself right in her living room. I didn't really pay attention to them, but I added one on my sandwich for color. And like Cliffjumper, I completely forgot about the little red chili. I didn't actually think of it as edible, merely ornament, so I ended up not eating it.

My sister dared me to eat the second one when she stopped by a few days later, and it was extremely potent, but with a surprisingly pleasing taste of chili. It turned out to be just the troublemaker Cliffjumper was supposed to be.
In a different universe, I probably consumed the chili along with the rest of the sandwich, and it probably reinforced the entire experience of the Chili Chicken Sandwich. And in the same universe, Cliffjumper was the human component in the Transformers universe. Instead of the yellow robot, it was the red robot that all the kids wanted for Christmas. 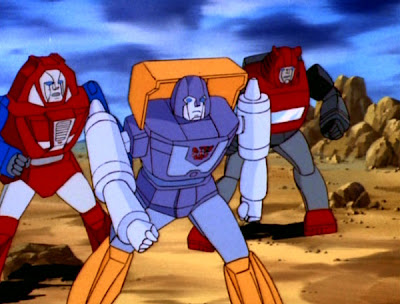 Enjoy you chili chicken sandwich, people. And remember to appreciate the tiny red robots and the tiny red chilis, even though they're clearly just supporting cast.
Posted by Jon at 1:00 PM