The Anatomy of Bacon, part 1 - The knife

I'll write a bit about the importance of having good tools in the kitchen, as well as some advice how you can sharpen your knives. Pictures of bacon, as well as details on American and Japanese cartoons inside. Read more for more! 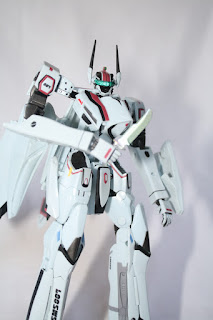 What cartoon did you watch back in the day?

I watched Duck Tails and Masters of the Universe, among others. At the time, we loved them, and found them totally rad! We would go down to the video store and rent a tape, watching it over and over the entire weekend.
The 80s were the golden age of cartoons. At least for us that were kids in the 80s... Instead of writing a long list of all the cartoons we had back in the day, I'll simply post this amazing picture by the great J. Scott Campbell. 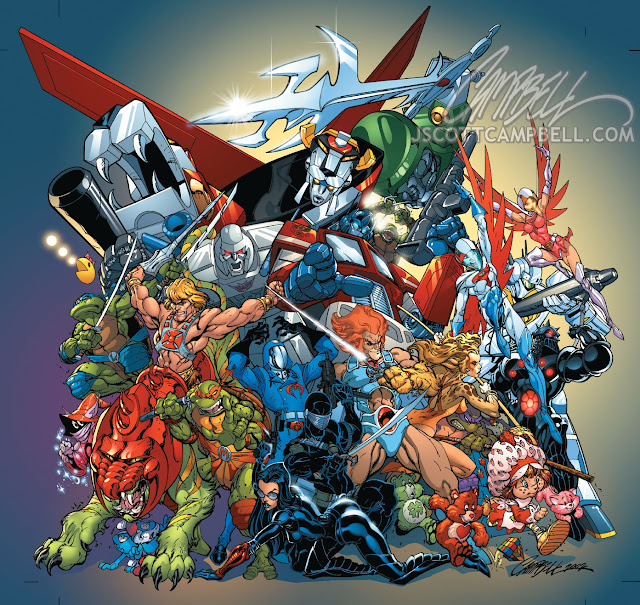 Luckily for us nostalgic, the most popular cartoons have been re-released on dvd, and more than often re-imagined. But the astonishing thing is that Campbell's picture only scratches the surface of the vast ocean of 80s cartoons. Just by talking to some friends, we were easily able to list close to a hundred different cartoons from our childhood.

Today, when I watch the old cartoons like Masters of the Universe or Transformers, I'm just embarrassed. Not because they are bad. They are bad, but that's not it. Not because I don't enjoy them today. I do enjoy them, because they bring back good memories.
No, I'm embarrassed because I cannot believe that me as a 7 year old kid had such low standards.
Understand that this has nothing (well, almost nothing) to do with the quality of the art or animation.
It's all about the story telling, the way the characters are presented, the themes that are dealt with.
Why were we treated like this? Why didn't anyone tell us? We were given awful stories, just because we were kids, and apparently, kids in the 80s just didn't care.

Are cartoons this bad today? No, it seems. I just finished watching Avengers - Earth's Mightiest Heroes, a cartoon from 2010, and every part of the production was brilliant. But for all I know, the stuff kids watch on a daily basis is probably just as awful as the stuff we were watching in the 80s.

There's no reason not to let kids see and read above their maturity level. Obviously, I'm not talking about letting kids watch violence and sex, but a good story will make just as much impact on a kid as it will adults.

In Japan...
The Japanese are crazy. They don't have a military, they have insane work ethics bordering the unhealthy, they eat raw fish and they learn judo in elementary school. And relevant to what I'm writing: They have a long and rich tradition for comics and cartoons. Or to use words you probably have heard: Manga and anime.  I'll skip the Japanese history and simply get to the point. Well, the first point anyway.

While we were being insulted with awful stories in Turtles, Thundercats and Super Ted, the Japanese got something that looked similar on the surface... But so completely different just underneath.
Super Dimension Fortress Macross was one of these cartoons, and if you watch it today, while comparing it to the contemporary American cartoons, you'll be amazed. SDF-1 Macross is generally about a war between the human race and an apparent alien race. It's set in the near future, and the humans have stumbled upon technology that lets them travel in space, as well as have planes that transform into giant robots. Cool.
This is very familiar to the American cartoos. In Transformers we got giant transforming robots and the battle between the good robots and the bad robots. But in Macross, the battle between good and "evil" is only the setting for other stories. 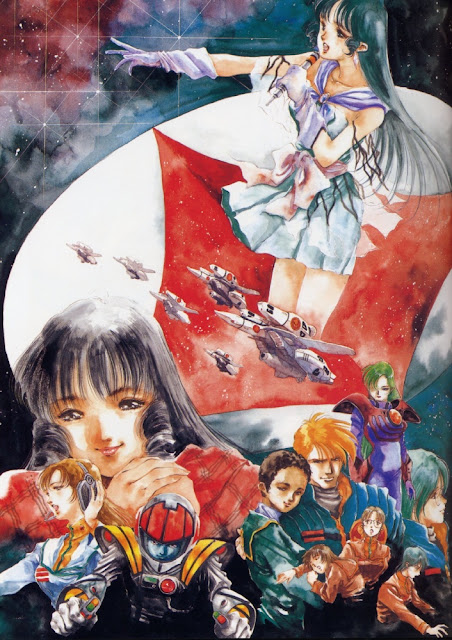 First of all, the story is moving a lot slower, and being a lot more sequential than what we got to see. It's obvious that every episode is part of a bigger story. We are treated with a story that sees the characters battling loneliness, difficult choices and the difficulty of growing up. The characters are not one-dimensional, even the leading cast of heroes have weaknesses, darker sides and general faults in their personality. We have villains that are not truly evil, simply battling their own right to exist. Themes like love, loss, loyalty, responsibility and apathy are dealt with. Like with all wars, people are dying. We are watching people getting killed. In a cartoon intended for kids. And without spoiling a lot, we're even watching the planet Earth being destroyed. In a cartoon intended for kids.


Would I have enjoyed Macross if I saw it back in the day? I don't know if it would have been my favorite, but it would definitely made an impact, and I honestly hope that me as a kid would have noticed the huge gap in quality between my American cartoons, and the Japanese animes.

I'll stop with SDF-1 Macross here, but rest assured, you'll read more about it in future entries here at Toys and Bacon...

Macross Frontier
What did this have to do with bacon? Nothing at all, but this robot here is from the re-imagination of SDF-1 Macross, the 25th anniversary anime called Macross Frontier. A fairly well made anime with entertaining music and cool battle scenes. The story is slightly more complex yet slightly less intriguing than the original Macross show. It's still of a distinctly higher quality than my beloved 80s cartoons. 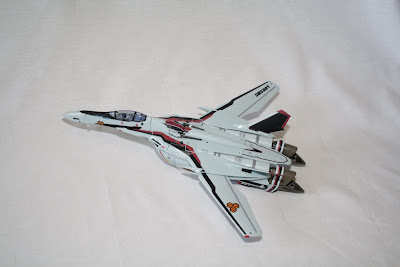 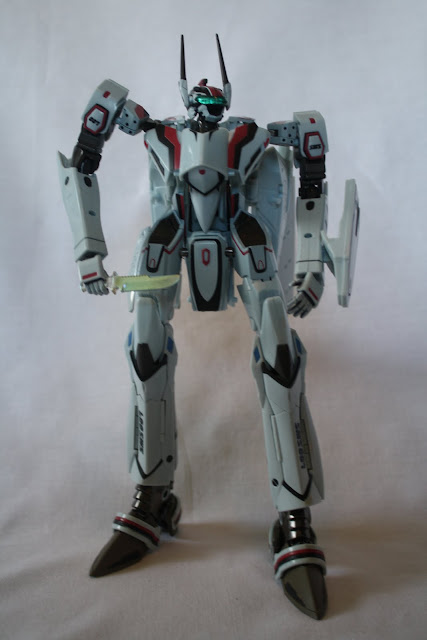 In Macross Frontier, which is basically the 25th anniversary remake of the original SDF-1 Macross, we're treated to updated characters, as well as the mechs (robots piloted by humans), and like the old Macross, they have made toys from the show. The robot/plane above is the mech of the main hero. The hero is kinda useless, but his mech most definitely is not. He can transform instantly between three modes, he has a variety of functions for flying in space, and he has a huge arsenal of weapons, including the totally bad ass energy blade - a knife that's obviously constantly remaining sharp.
Now, this robot's knife is a weapon, used to stab monsters and evil aliens, while the knives we use on a daily basis are meant to cut and slice food. 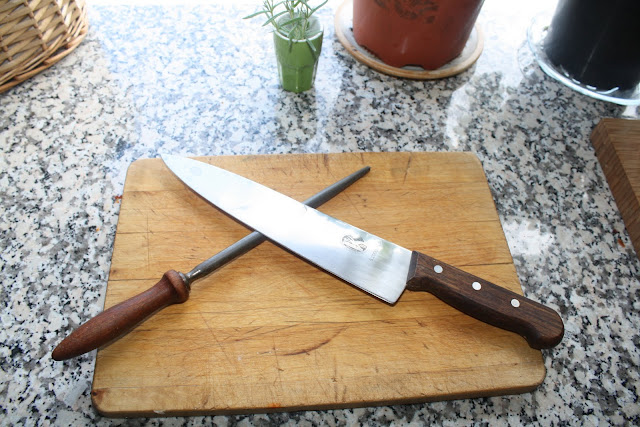 The knife
Far too many people are content with crappy knives in the kitchen, and I'm actually offended when I see people throw their sharp knives in the same place as the rest of the cutlery. Luckily there's less of these people than ever before, and those that actually care about their food usually both have a good knife, and knows how to take care of it.

The above statement is not a joke. You see, it's all about letting the knife do your work, and a sharp knife will do your work. But the second you have to apply force, the chance of you cutting yourself will increase. 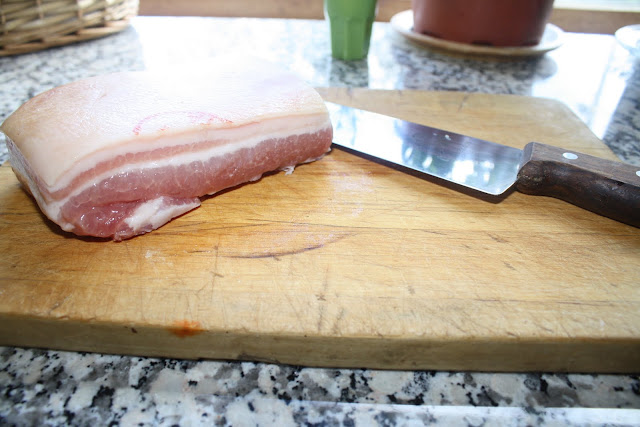 My knives were useless today. I had bought a piece of uncut, unsmoked, lightly salted bacon, and my knives were just not up to the task of slicing the bacon. This is not because I haven't taken care of them, but because I had not sharpened them in a long time. The tool next to my knife was a honing steel, but all that does is to even out dents. It doesn't really remove any steel, which is how you actually sharpen it. From time to time, specially if you use your knives a lot, you actually have to sharpen them. You can of course do it yourself on a grinder, but not everyone has a grinder. Another solution can be to take your knives to the local butcher and ask if they can sharpen them for you. Respectable hardware stores are also likely to be able to sharpen your knives. 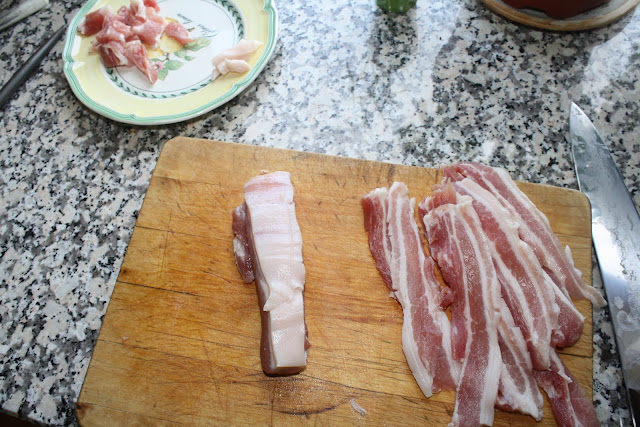 Neither of my advices helped me today, I had dull knives, and I wanted bacon. The result was slightly thicker slices of bacon than I'd liked. It's still bacon, don't get me wrong, but today I kinda wish I had the energy blade of the Macross mech.
Posted by Jon at 12:49 PM