In any other situation, I would be embarrassed to show pictures of such low quality, but the importance of the topic is far too important for me to not write about it. This is just one of those cases where no one can be silent, not a single person will show ambivalence, it affects literally everyone!

How do you compose the perfect hamburger? 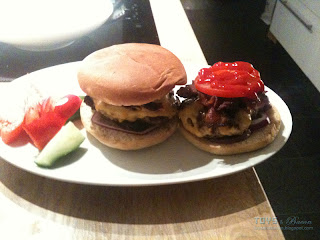 Read on for low quality pictures, high quality burgers and choices that will echo through eternity and decisions that will affect this world as well as other realities.

First of all, think about this:

How do build your burger?

I'm not talking about making the burger - I've shown a few recipes for that, and I'll not fault you for coming up with your own variations. I'm talking about the greater concept of the burger. With bread, sauces, vegetables, other additions that compose the entire meal that is the burger.
What do you include? Only bread? Cheese? Pickles? Onions?
I suspect this is very much individual taste, but as with everything else there is a wrong way and there is my way. I'll show you the right way to compose a burger, and you can argue against it if you want.

I was visiting a friend this weekend, and we decided to make burgers.
The burgers we made followed this recipe. The result of the ingredients are four decent sized burgers.
We used finely chopped jalapeños as the optional ingredient, other than that it was exactly like this:

And then comes the composition.


I started with a few rings of onion. Many would have gone for a sauce of some sort, but I argue that it's unwise to do so. You don't want to have too much liquid, or you'll end up soaking the bread. This include the burger itself.

Of course, this burger was not soggy, juices were not running, they were confined within the burger - perfect is another word for it. But let's say I had pickles, they are likely to soak the bottom bread. I do risk a bit of this with the tomato, and my friend placed his tomato on top - which I of course find absolutely ridiculous. Tomato is perfect for the bottom, unless it's extremely juicy. 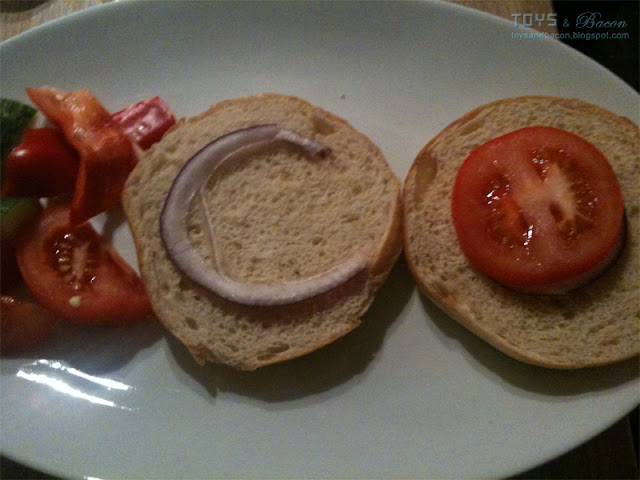 Next up are some jalapeños. I already had  jalapeños inside the burger, so additional pieces may be redundant. Still, I like jalapeños a lot, so it's obviously the right thing to do. I feel I could have added lettuce here, but no lettuce in hand. 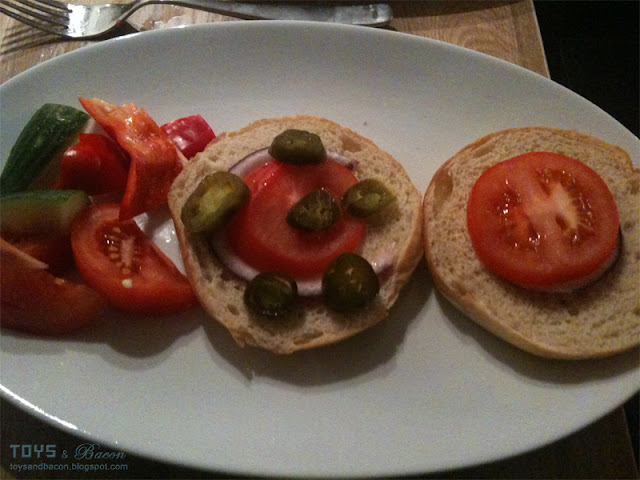 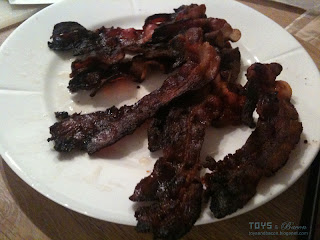 Here comes the star among the additions. Can you ever call bacon an addition? Isn't the rest of the stuff just there to highlight the bacon? Isn't that the case when ever there's bacon involved?

In fact, I'll show a picture of the bacon alone, just to emphasize this.

Now, where do I put the bacon? Of course as close to the center as possible. I value the bacon just as high, if not higher than the burger itself.
I could have had the bacon on top of the burger, which would have made sense if this was hierarchical - which it's not. That would mean I value the top bread higher than the burger. I could have had the bacon on top for the reason of it not breaking - but that would mean it's slightly too crisp, and I've failed by preparing the bacon properly. It would also conflict the cheese one should always have on a burger. So it finds its place right below the meat. 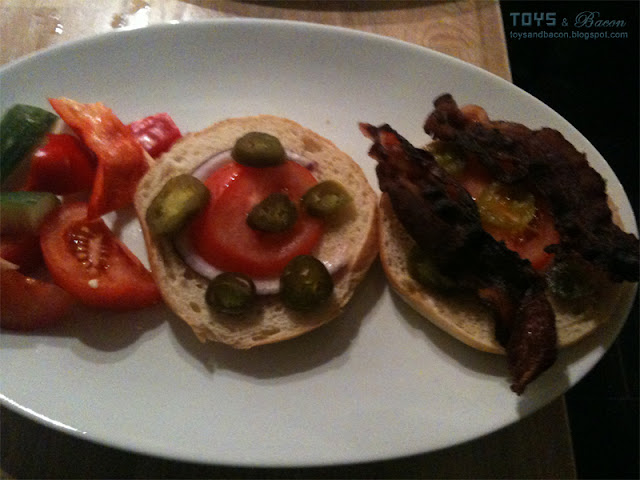 Now comes the burger with the added cheddar. Notice the thickness of the burger, how it compares with the rest of the ingredients. A good burger should not be too thick - and certainly not too thin. This burger is obviously perfect. 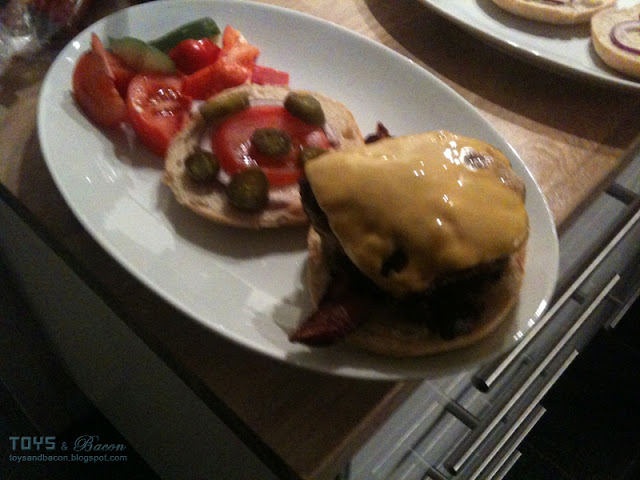 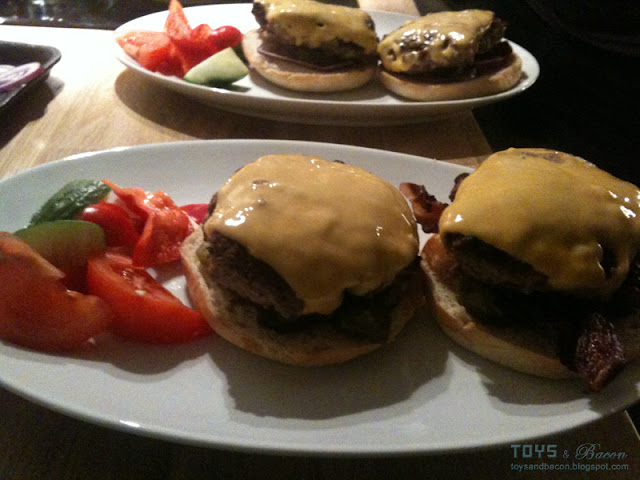 Finally the top bread. This would be the place to have pickles. And you should have pickles. I also added some ketchup to the bread. 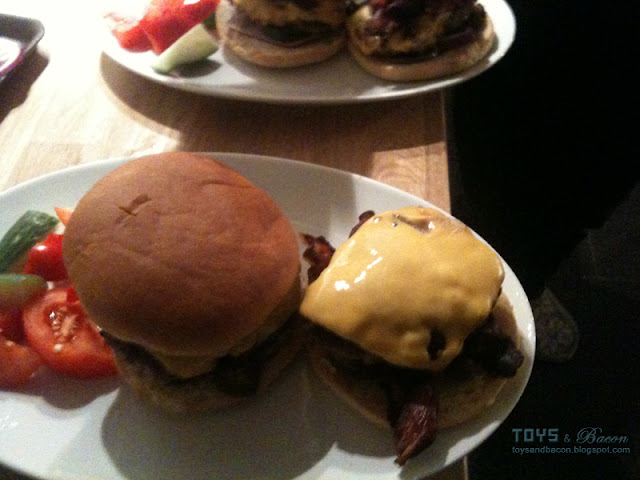 When I sum up, the burger has this composition (well, apart from the pickles my friend promised he had, but clearly didn't). I also excluded the jalapeños, mostly because I forgot about them when I made this lovely graphic, but also because they were a bit redundant - I already had jalapeños inside the burger meat. 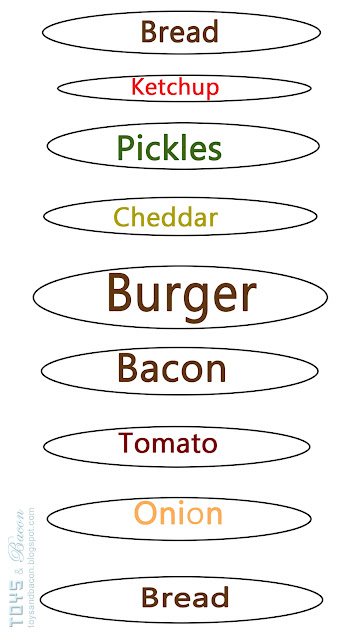 Is this the correct way to construct a burger? I think so - this is the perfect burger if you ask me. I would love to hear arguments that this isn't the perfect burger. I know some freaks who prefer pineapple and other weirds stuff.
But regardless of how you construct it, this is easy to make, extremely delicious and highly customizable.

I know this post is old, but I've only just stumbled on it, and I believe I have a valid point to make. You mention that putting some sort of sauce on the burger will make the bun soggy, but I submit that adding a bit of mayonnaise to either bun (perhaps under the tomato?) provides a bit of "waterproofing" that will help prevent moisture from soaking in. Just a thought...

I like that thought, nthelight079. The mayonnaise is thick enough to not soak the bread. Of course, since then, I've also learned how to make a proper burger sauce.