Hey, I know this is a delicate matter. And I believe I covered some of my thoughts on reproductions and knock-off robots the first time I wrote about Bootleg toys.
There, I used the KO Lord Zarak - the head of Scorponok as an example. The original came with Scorponok of course, but the KO version came in a set with nine other small Headmaster heads.
And even though they are somewhat controversial, I'd like to show some pictures of them. 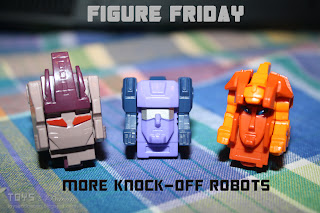 Read on for toys I could never afford if they were authentic. 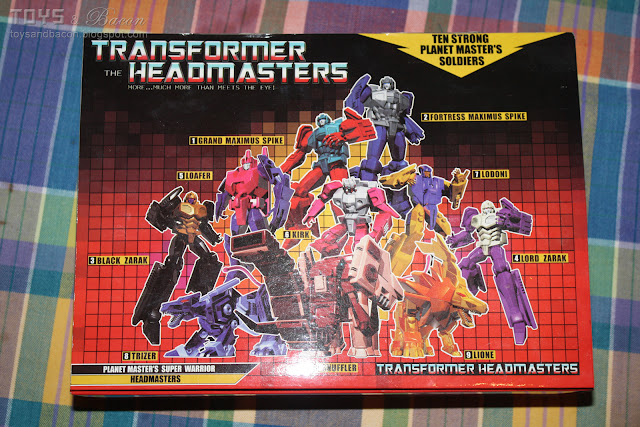 First of all, let me just remind you that the terms are a bit mixed. I have called these KOs (Knock offs) and will continue to do so. But while they certainly aren't authentic Takara productions, it's not really correct to call them "knock offs" either. A knock off would be the one I showed you two weeks ago, a toy that is clearly stealing the design of another toy, and claiming to be something new. Knock offs also tend to have a far lower quality.
These Transformers Headmasters heads are reproductions, they don't pretend to be new characters. They are intended to be identical copies of specific toys. They are not licensed by Hasbro or Takara, and are obviously illegal in that matter. But neither H or T has been particularly aggressive towards third party companies when it comes to Transformers. I don't know why, but it's both a good thing and a bad. 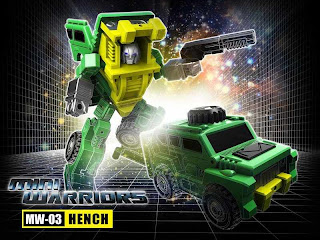 The good part comes when we see third party companies make toys of characters that Hasbro or Takara would never do themselves, like igear - who have for a few years now made some really interesting stuff.
I love third party companies! It's augmenting and often improving the collections. To the right is obviously a new, updated version of Brawn. It's the same idea, but vastly superior to Hasbro's G1 design of the character. Hasbro will probably never release a G1-styled Brawn, so igear took it as their task to update the G1 desgin. Awesome.

The bad is of course when we see direct reproductions that are being sold as the real deal. The Headmasters set wasn't sold as authentic, and when ever I have seen them for sale, it has been correctly labeled as reproductions. But it's not always that easy either. More on that in a bit.

The ten KO headmasters heads come in a really cute box with some fancy art. It also has their names, which is cool for us that has no clue who they are. Inside the fold cover, there's some stuff written in Japanese and blueprint styled art of Fortress Maximus, and the heads in their... uh robot mode is visible for display.
I like this way of packing toys. Of course, many Transformers back in the day was packed just like this. 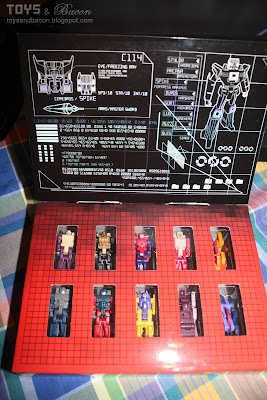 I don't know a whole lot about the robots in this set. I got it to satisfy my need for tiny robots, and because I wanted to see the difference between my own genuine Lord Zarak and a reproduction.
Fellow collector, Heroic Decepticon could probably tell you all about these guys He probably already has, somewhere in the vast and epic amount of awesome that is his blog. You should really visit his blog if you have even the slightest interest in the transforming robots. His knowledge is second to none, and his collection is out of this world.
All I know is that 8 of these heads - well the authentic versions anyway - belong to rare, Japanese exclusives, probably based on the Japanese Transformers cartoons. I believe some of them were sold as heads only, not as accessories to bigger robots. This wouldn't surprise me, they are decent toys on their own merit.
Of course, two of them are copies of US/European released Transformers, but even these would be considered rare. It's the heads of Fortress Maximus and Scorponok. The easiest to find original is probably the one I already have: Scorponoks head, Lord Zarak. A complete Scorponok is somewhere in the $200 range, while Lord Zarak alone could generate $50.
A complete Fortress Maximus will easily $1000, and his head is probably anywhere from $100 to 250.
I can't be that specific on the prices for the Japanese exclusive robots, but the only ones I am able to identify - the heads of Grand Maximus and Black Zarak - are extremely rare and expensive.
The other six heads, well.. there is a reason there are reproductions of these guys. 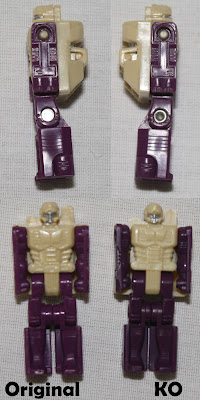 Now, what does this tell us? I mean, I knew I was buying reproductions, knock-offs, fakes. I didn't really pay a lot for them, and there was never any doubt what was being sold. But imagine if someone listed these guys separately on ebay, claiming they were the real deal.

I talked about this in my first bootleg article. It's a real problem. Not necessarily because people are getting scammed. That is a problem too. But the real problem is that collectors have to make such an effort to find out if the product they are getting is authentic. I know that even an expert like Heroic Decepticon is skeptical to buy specific robots when he knows there are counterfeits of those same robots floating around.

If I didn't already have the real one, I could never identify the KO as a reproduction. In fact, if my original didn't have ballpoint markings on his face, I would probably not be able to tell what was what. Yes, I see that the details on the original are better, and that the hue of the purple plastic is different. But damn.. That's a high quality knock off toy.

And like last time, I see a certain use for these toys. If you are aware of what you're getting, I can see them as cheap replacements. Or cheap fun. But the instant they are being sold off as the real deal, we have a big problem.

Back to the set, notice that there are 7 "robots" and 3 animals. It looks to be a panther, a lion and an elephant. 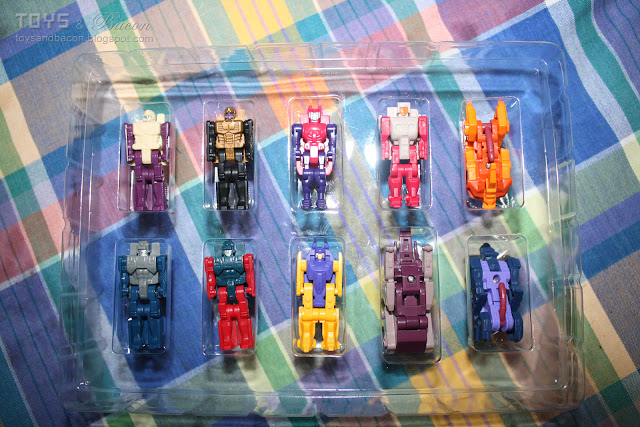 This is the three "animals". I really love the traditional Transformers look of the panther guy. The lion has that sideburns thing going on, and a weird looking face. Elephant dude is very unique looking, but has an awkward transformation. 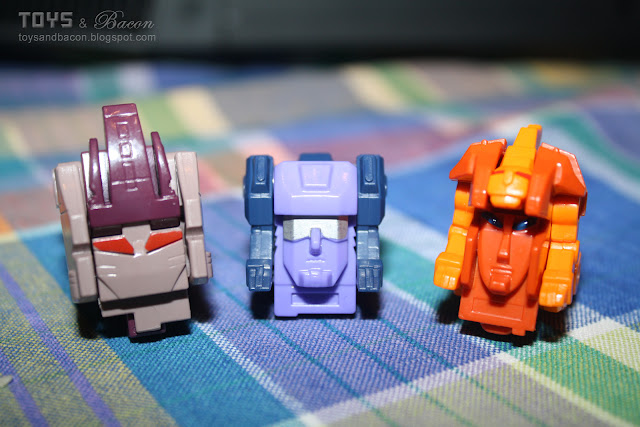 Here are the other three, humanoid heads. All of them are distinctly styled like the 90s Japanese Transformers era. The middle one, the red/gray one is my favorite among these three. The crimson/purple one has slightly too high antennas, but has a really cool grin, and looks sweet in humanoid mode. Purple/yellow one is forgettable. 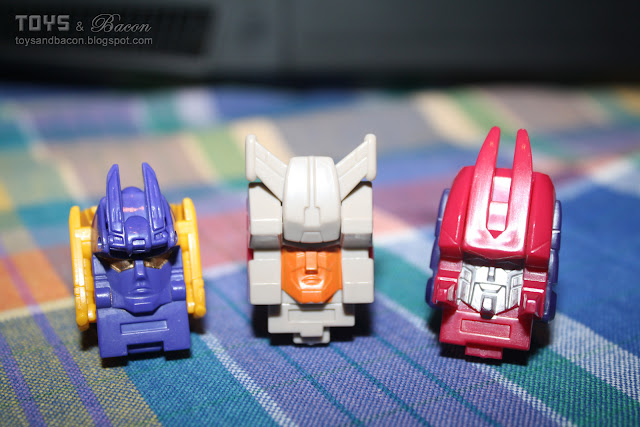 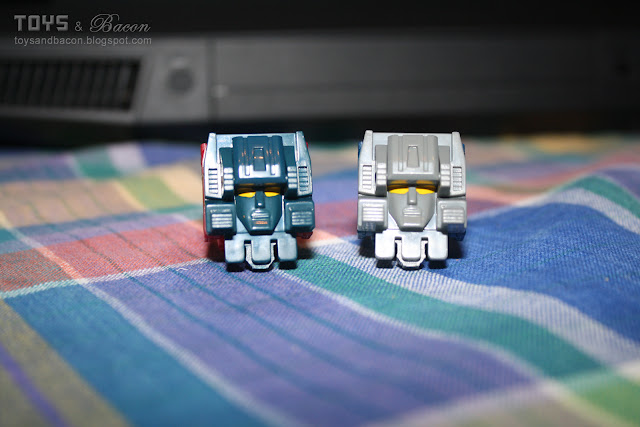 Here's Black Zarak's head and Lord Zarak. Not much to say here. 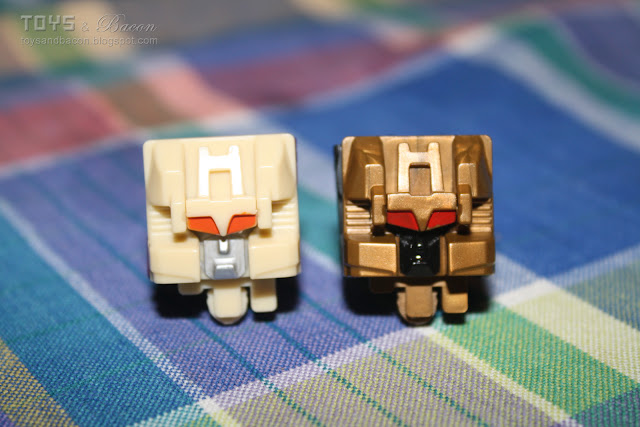 And yes, they all fit in my Headmasters. I didn't take picture of it this time, but I will show you some pictures further down the line. I don't have a great selection of Headmasters - they are among the most popular Transformers for collectors, and are naturally expensive, but all three of my Headmasters have tried out these reproduction heads. 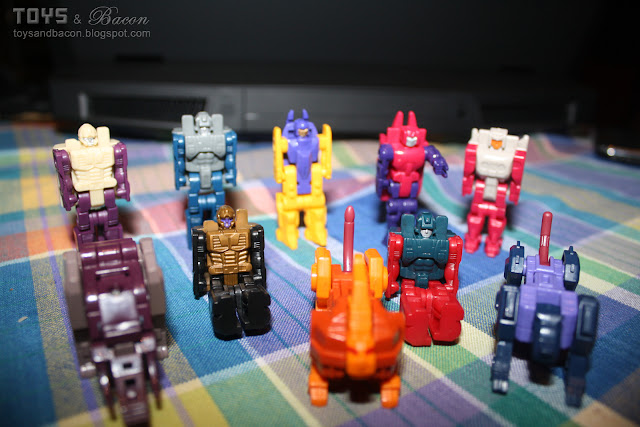 On some level, it leaves a bit of a bad taste to have these reproductions, but they are so damn fun - the bad taste doesn't linger. As long as people are aware that these are out there, and that sellers are honest, it's all good. Sadly, that's a naive thought. It's not really affecting me, because I never take those risks. I'm also certain that the people who are going after the authentic Japanese releases are fully aware of the reproductions, and take the necessary precautions. But it's still annoying that there are sellers out there who will try to pull of scames.
I love these toys, and if they were real, I would never dare to play with them. As it is, I can really just have fun with them the way it was meant to be. Toys are meant to be fun, and it may be a controversial statement, but I think KO toys are fun.

Enjoy your weekend, people!
Posted by Jon at 2:43 PM