I have admitted my love for bootleg toys in the past. I mean, it's not like I prefer bootleg toys over the real deal, not at all. But I love the idea of silly, cheap, low quality substitutes filling that role as disposable alternatives to what can be extremely expensive toys. Sometimes, the lines are blurry, almost scary. Like with the Transformers Lord Zarak I showed a few months ago. This toy is not meant to fool those in search for a real, genuine G1 Lord Zarak, but it very well could fool someone. It had that kind of accuracy and quality, but it's still just a counterfeit.
Today, I'll show you the absolute polar opposite of the bootleg Lord Zarak. Quite possibly the lowest quality toy I own, a completely meaningless bootleg, copying a toy that no one bothers giving a single thought. 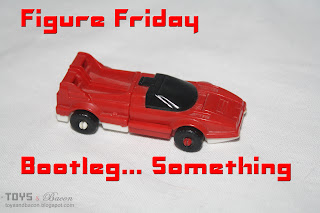 Read on for the bootleg of a random, red Gobot!

I have had this little guy since like forever. I cannot recall where I got it, who gave it to me, how it came packed, or how much it cost. But I can give a very qualified assumption.
But first, I'd like to come with a half-assed effort to try and describe this toy.

It's red, black, and extremely flimsy. It's obviously a car, and you can extend its feet and arms. Rotating a panel on the hood of the car reveals something that's supposed to be the face. I think he's missing half of his face.
Did I mention he was flimsy? It's not just the loose "joint" (as you can see, I had trouble getting him to stand), it's the fact that the plastic itself is flimsy. Very light, hollow. It feels cheap. It feels like something that came packed with a comic book or a candy bar or something. 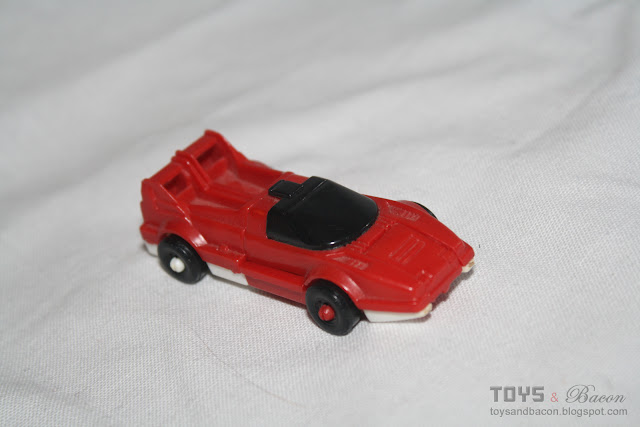 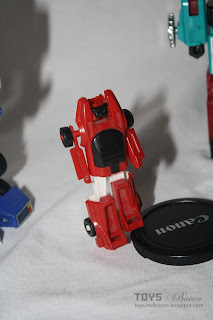 This is a bootleg, counterfeit version of a Gobot. The Gobots were a competing toyline to Transformers, made by toymaker Tonka. An unforgiving situation to be in already from the get go. And it doesn't make it better that the Gobots are absolute garbage. The design of the robots are awful and awkward, and even though the robot modes of many Transformers are hilariously bad, the Gobots are on a completely new level of suck.
Take the names, for instance. It sounds like someone's grandparents came up with the names. Where the dune buggy in Transformers had the name Beachcomber, the Gobot dune buggy is called Buggy Man. The Transformers space shuttles had names like Blast-Off, Astro-train and Sky-Lynx, while the Gobot version is called Spay-C.
How do you name a bulldozer and a dumper? Well Hasbro named them bad ass names like Bonecrusher and Long-Haul. Tonka: Dozer and Dumper.
Police car called Hans-Cuff? At this point, I'm suspecting Tonka was just goofing around on purpose.

Here is a decent resource for the Gobots, with pictures and details. Worth checking out if you want a good laugh. Imagine the poor bastard kid that got Scooter for Christmas, while the others got Jetfire, Starscream, Shockwave and Optimus Motherfucking Prime!
It doesn't matter what came first, or how good the cartoon was: Gobots are a poor man's pathetic version of the true Robots in Disguise. 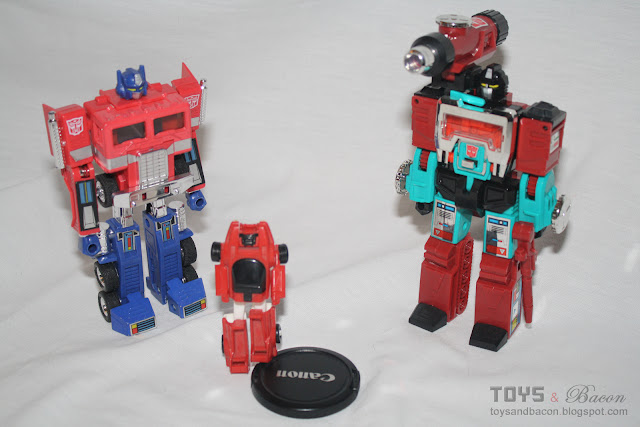 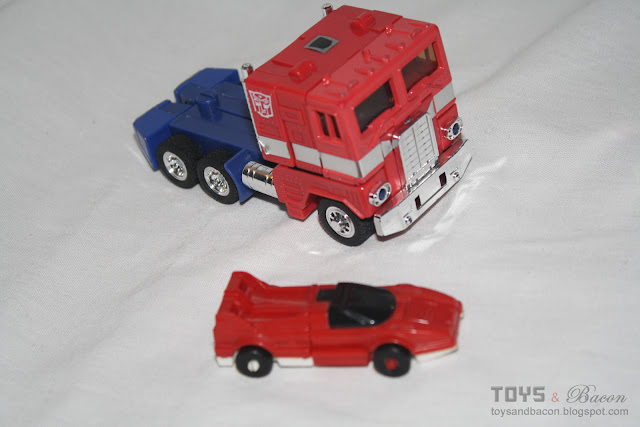 To this day, even the rarest of the Gobots are not hard to come by.
And then someone goes ahead and makes a bootleg of a Gobot. A toy that no one in their right mind would take over a proper Transformer. I know Gobots are not straight out copies of Transformers, but it sure feels like that. And in that extension, this little red guy is indeed a copy of a copy. 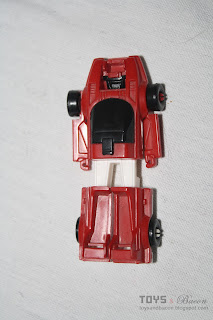 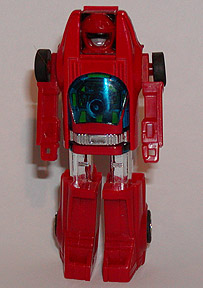 But hey, he's survived so far. And he's still in my collection. That has to count for something, right?
I assume he came from a local toy store/grocery store, through some shady distributors. I assume he was sold in a pack with several other toys, but they weren't necessarily robots, let alone toys for boys.

To be fair, the Gobot Turbo isn't that bad. Here's the original, and I don't mind his car mode, his robot mode is ok, and his name is one of the best among the Gobots.


But I still have a hard time wrapping my head around the fact that someone wants to make a counterfeit copy of it. In fact, just thinking about this, makes the toy a whole lot more interesting to me now, than it was to me as a kid.