You see that teal plane in the upper right corner? That's the RVF-25 from Macross Frontier.
It's been sitting on my shelf for a long time, and all though I'm usually fully aware of the toys I have on display, something has gone horribly wrong behind my back. I must have failed to notice the disaster that has been sneaking up on me - and more specifically - the RVF-25.

It was badly discolored. It's a tragedy! 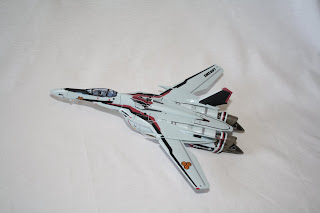 I had to hurry to get it back in its package, and as I was in a panicked state of mind, I forgot to take pictures of it. But believe me, it's bad.
The white/light gray VF-25F (pictured) went back in its box as well, just in case.

I know, I'm exaggerating, and using words truly unfit to describe sun-damaged toys. I can of course just buy a new RVF-25, and I think in the near future I will do just that. Maybe even hope Bandai release the RVF with the updated construction.
But I'm really annoyed by discoloration. And it worries me a bit, how I will be able to display some of my toys.
You see, I truly believe toys are meant to be seen, and played with. Not be stored in a case, inside a closet, never to be seen.

With Lego, and to a certain extent smaller action figures, I know what the cure to discoloration is. It's the heroic warrior Hydrogen Peroxide, H2O2. I just submerge the pieces in a solution of Hydrogen Peroxide, and the discoloration will go away. But the RVF-25 is too big to fit in a jar with H2O2, and it's too complex for me to disassemble - I think.

I had planned on saving the RVF-25 and the rest of the Frontier Valkyries for my 100th blog entry, but now I'm not so sure anymore.

So... Throw me suggestions to what the 100th entry should be about, if it's not transformable jets from Macross Frontier!
Posted by Jon at 1:19 PM

I think you should write an entry that touches all the previous... now consider this a challenge...

Check out Retrobright. Can make your H2O2 solution into a gel that can be spread on larger items.