No matter what you collect, there will be that one completely unobtainable piece you desperately want. Most collectors are familiar with the term Holy Grail, as that piece. It's usually synonymous with extremely high price, but it's not that simple either, which the picture of a rather ordinary action figure should point out. 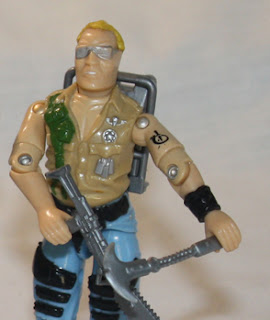 Read on for a few thoughts on Holy Grails.


G.I. Joe - A Real American Hero is an interesting toy line, because it seems that no matter how big your collection is, there will always be items that would add to your collection. I have friends with far bigger collections than me, with every official US release in their possession. But they are blessed (or cursed, depending on how you look at it) with the existence of unique releases from other countries, prototypes, recalled toys, variants, and of course upgraded examples of toys they already own. As you probably can understand, this is more about the chase, the quest, than it is about owning the item. 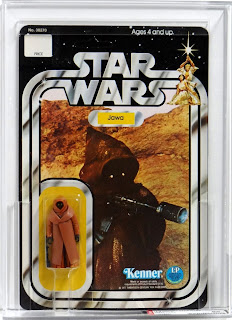 Chasing grails can be expensive, as I will show further down. The reason being the nature of many grails. They are usually rare, big and attractive to many collectors. This will push the price. The impressive USS Flagg was expensive already when it was released in 1985, making it certain to become a grail in the future. The size, the price, the many easily lost parts. A loose, mint, complete Flagg will most likely cost you somewhere between $1000 and $2000.
Smaller toys can become just as expensive as the big play sets. For instance the first release of the Jawa in Kenner's Star Wars line, from the late 70s. The first production run of the Jawa included a vinyl cape for the tiny slave trader, while the majority of the run came with cloth cape. This is all about supply and demand. The supply is low, but the demand among Star Wars nerds is high, which is why Vinyl Jawa can generate thousands of dollars.

But it's not just about the rarity of the item, and grails doesn't necessarily have to be the most expensive and rare items.
Grails may vary from person to person, because while there is a consensus regarding what toys are rare, there is no consensus to what toys are attractive.

If you collect Transformers, your grail may be the likes of Fortress Maximus or Grand Maximus (below), because they are big, expensive and impressive looking. But your grail may just as well be a first release Bumblebee on card, a figure that will set you back no more than a couple of hundred dollars, in contrast to the $5000 Grand Maximus. It all depends on the perspective of the specific collector. 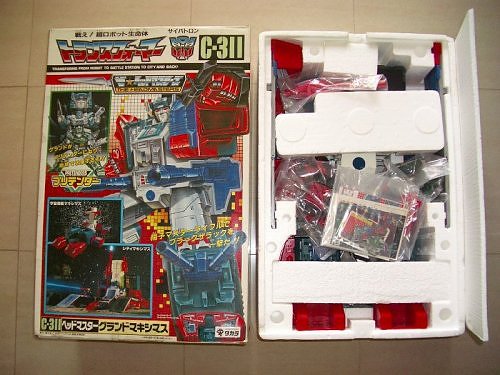 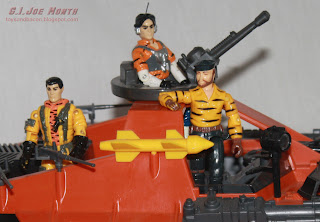 I can imagine there are many grails in the G.I. Joe line. Some of the South American released figures are rare because they had extremely poor quality, and the good examples end up becoming very attractive.
Some of the international repaints may be grails for certain Joe collectors, like the hilarious Tiger Force dudes pictured here. Then you have the elusive store-exclusives, like the Sears red Hiss tank I mentioned last week. For some, a perfect condition carded version of the 1982 figures may be considered grails, but for others it may be simply owning the toys they had as a kid.

Everyone will agree that there's something very attractive about the big three playsets in the G.I. Joe line: The scary Cobra Terrordrome, the impressive USS Flagg, and the mighty Defiant Space Shuttle Complex. I would like to claim that my grail is the Defiant. I've wanted one since I was a kid, I love the space theme, and I think it's a cool looking toy. But at the same time, I know it's not particularly hard to get. It's just expensive, and difficult to ship around the world. An unused, unassembled one, preferably in a sealed box would set me back anywhere between $2000 and $8000. 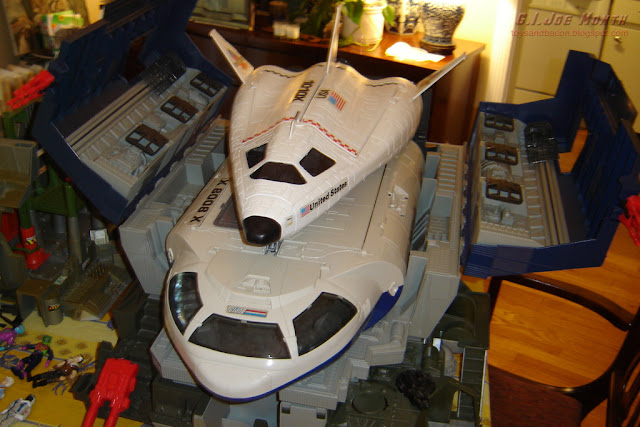 The Defiant is there if I want it. I can afford it, if I shift around priorities a bit. But that last part is the main reason I don't have the 1987 Space Shuttle Complex.

When I started getting back into Joes at the age of 19, I knew there was something I needed in my collection. I wanted carded figures as they were released in my country. My holy grails weren't the massive playsets or the super rare figures.
My holy grails were Norwegian carded figures.
I didn't have a specific character I wanted, but I knew that G.I. Joe (released as Action Force) were at some point being sold on specific cards in Scandinavia.

I went to local toy stores and asked if they had some old toys lying in a dark corner of their basements, without success. Even when they said they didn't, I came back the next week, and asked other employees.
I tried to contact the distributors and asked if they had surplus stock hidden away, but no luck. I tried to email Hasbro's Norwegian departement, but they were borderline oblivious to the fact that they were the ones who had made these toys.
I eventually got into various collector communities, and continued my search. I requested aid from fellow Scandinavian collectors, as well as the collectors in North America, and made many friends in the process.
The quest for my holy grail was a great one, even if it turned out to be unfruitful.

Mainframe and Buzzer on Norwegian card. 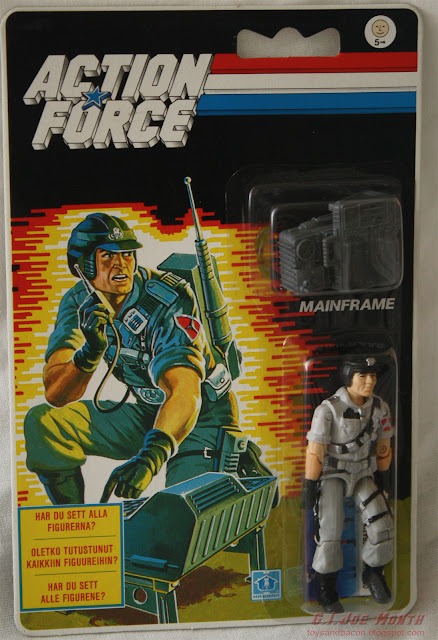 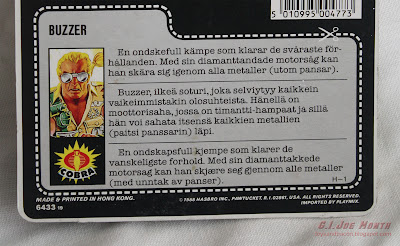 These carded examples were in the possession of a fellow collector, who had no particular attachments to either the toys or the way they were presented. If I recall correctly, he was dutch, of all things. Price? I think I got them cheap, somewhere in the $100 range for both. The seller was probably satisfied, but no more than me.

Today, I don't have a holy grail when it comes to G.I. Joe. There are still toys I'd like to own at some point, like the Defiant. But it's not something I actively pursue.

But the quest for something that seemed unobtainable is a fantastic experience.
Posted by Jon at 12:44 PM