Arctic Masters of the Universe?

The winter came suddenly for my buddy JP. Being a resourceful person, he chose to see opportunities, where others would simply complain, barricade the door and hibernate until the spring came and rescued them. JP took his toys outside for a photo session. Now, I have reminded him to get a better camera. Still, these pictures aren't half bad for a phone. 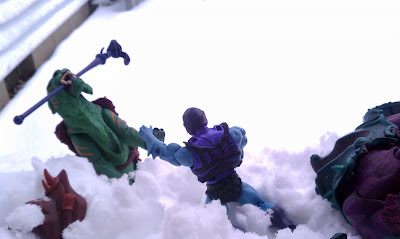 Click on in for pictures of toys outside in the snow!

We both collect MOTUC - Masters of the Universe Classics, the remake of the vintage 80s line. And for all its faults, it's a fantastic toy line. The toys just begs to be put on display, posed in various stances, photographed.
But one thing has always puzzled me. The complete lack of arctic characters. A massive toy line like this, and no characters designed to venture the colder environments. All its contemporaries, all the 80s toy lines of a certain size had arctic characters. G.I. Joe obviously comes to mind first, where we were given quite the handful of arctic soldiers and vehicles. More than enough for me to make an entire display of arctic combat. Many of the issues of the comic, some of the absolute greatest ones, featured arctic warfare.

Kenner released a couple of arctic characters in the vintage Star Wars line, all though that shouldn't come as a surprise, seeing as the entire first half of Empire Strikes Back takes place in Hoth - the frozen planet. Transformers doesn't have any clear cut arctic characters until later lines, like BeastWars. But BW gives us the main character, Optimus Prime as a mammoth!
I guess it's a stretch, but even in Generation 1, there are characters that could pass for arctic ones. I'm obviously thinking of some of the Pretenders, pictured to the right (picture borrowed from Seibertron. But many issues take place in colder environments, and characters like Optimus Prime, Megatron, Starscream, are just as home in the snow as they are in the desert.


But Masters of the Universe, for all its varied characters, has none specialized for snow. Grizzlor maaaybe, but then you look at the cartoon where he's featured, She-Ra Princess of Power, and there's nothing to make us think he'd be more useful in the snow than he is in the humid forests of Etheria.

You'd think we'd maybe get a variant, like Arctic Blast He-Man, but no such thing. We did get Flying Fists and, Laser Light, Battle Armor and Thunder Punch He-Man though. The 200x toy line did include Arctic He-Man, I believe. I need to check up on that. But the vintage line, and the current Classics line, no luck.

And yes, I do think this is something that's missing from the Masters of the Universe toys. I'm a real fan of arctic toys, and it makes for awesome play time when there actually are snow outside.
But again I digress.  It's not like He-Man - the Most Powerful Man in the Universe would have any problems fighting Skeletor in low temperature. And JP shares his pictures of He-Man doing just that, and more. Unedited and delicious toy fun! Enjoy! 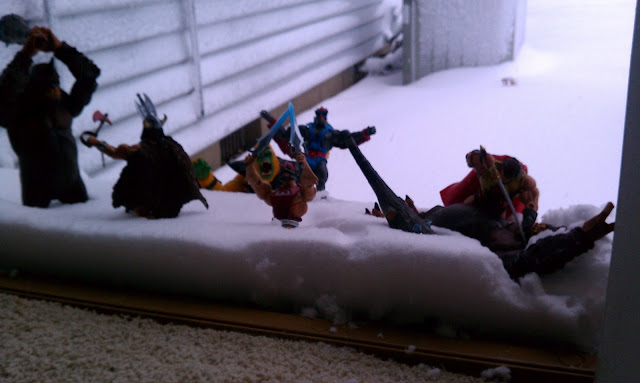 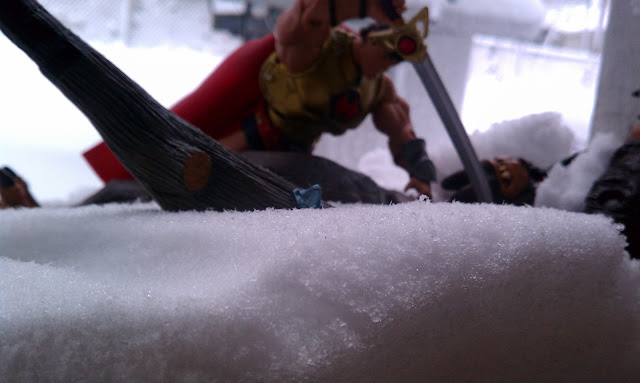 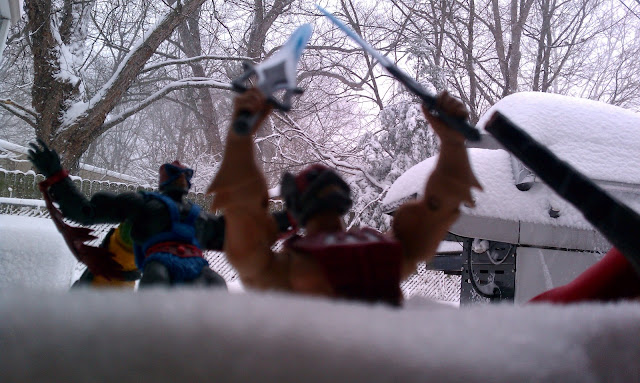 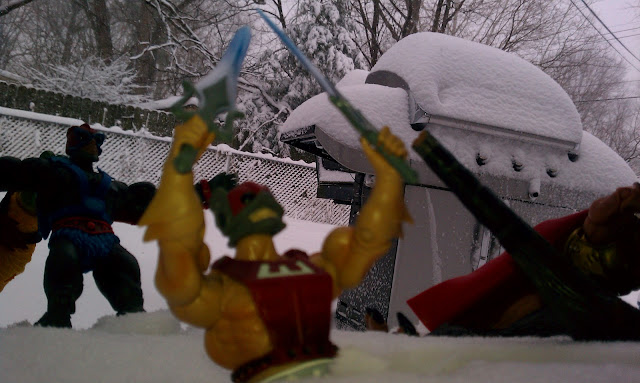 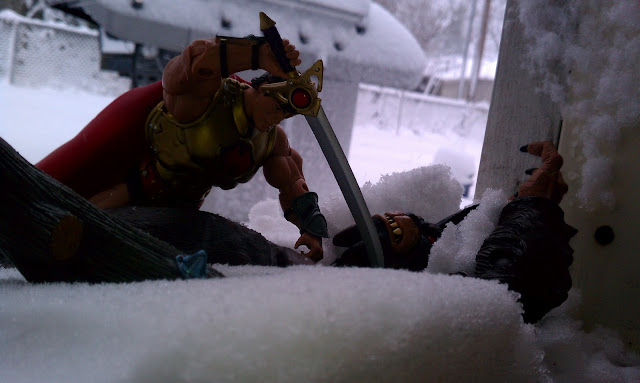 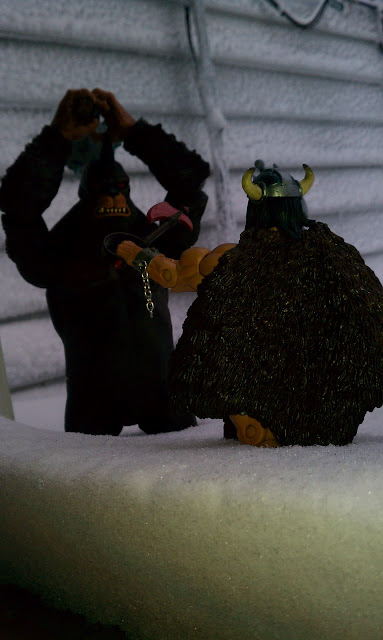 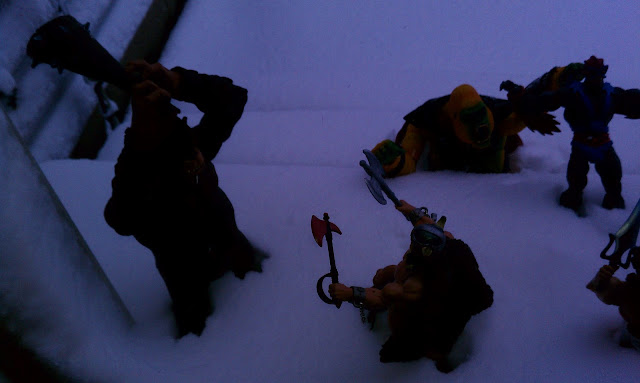 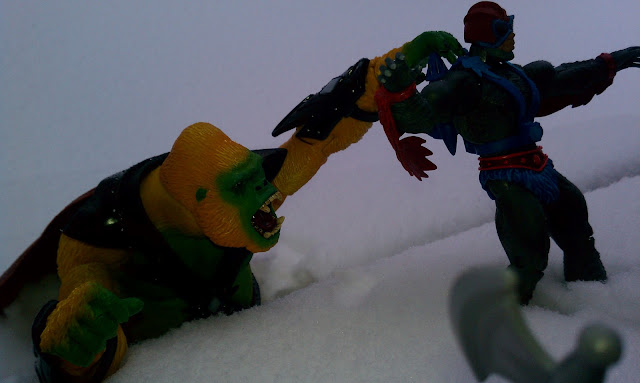 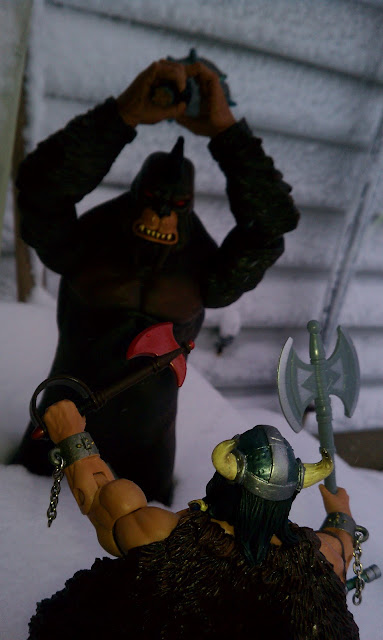 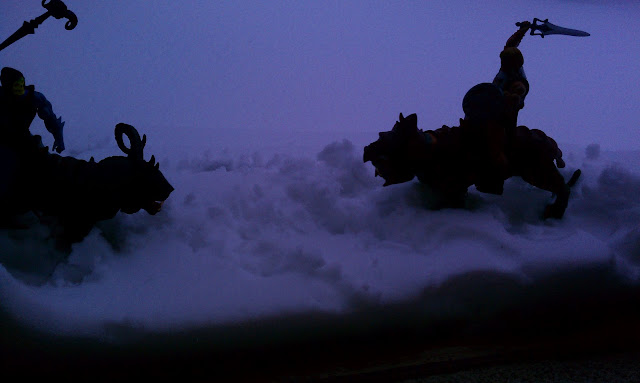 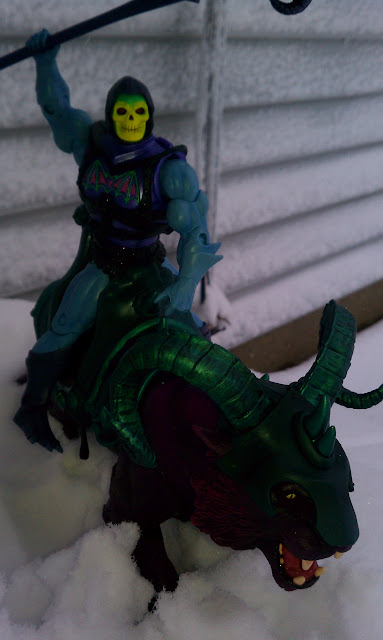 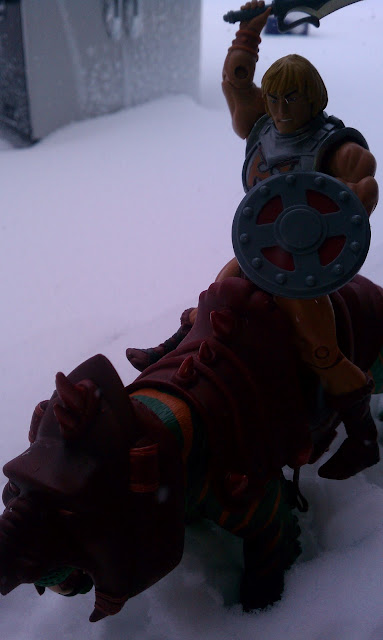 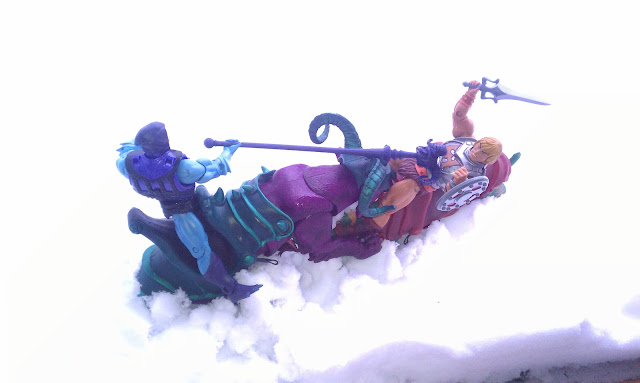 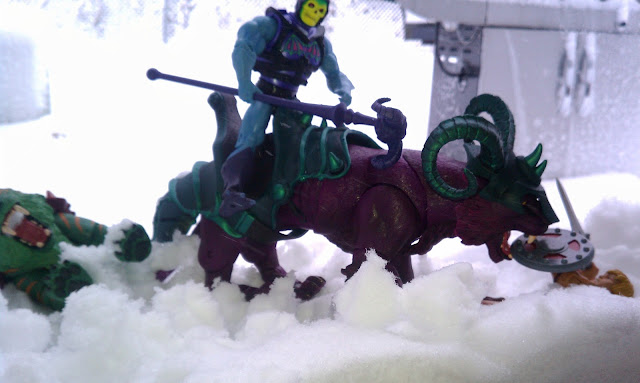 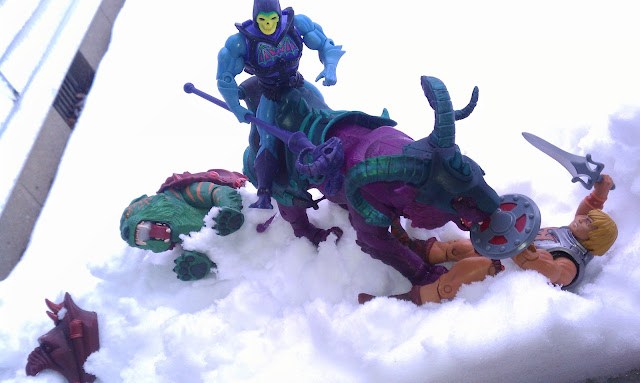 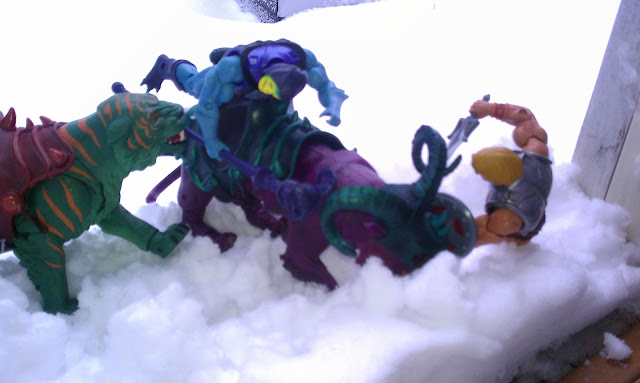 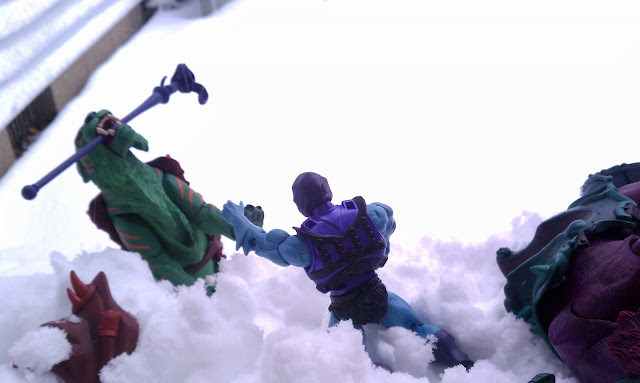 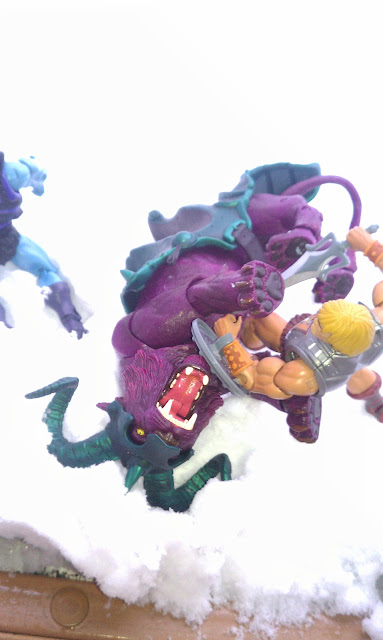 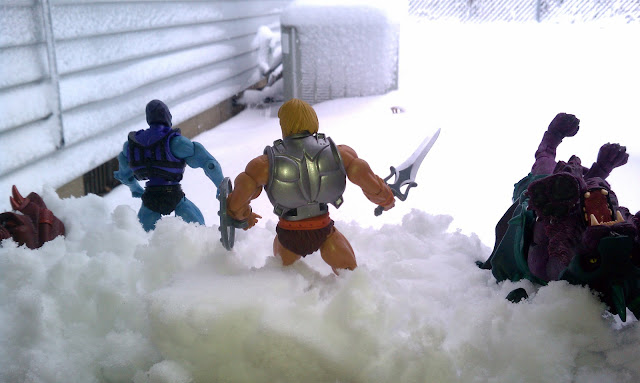 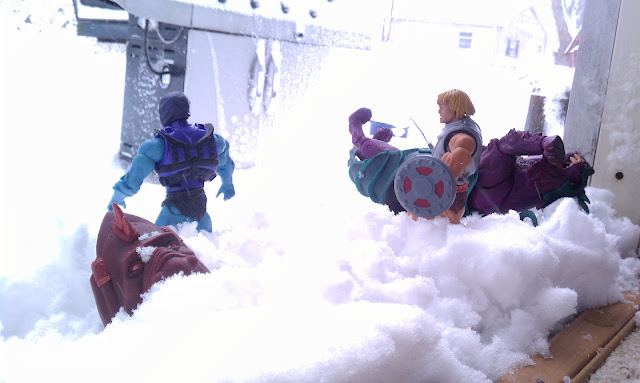 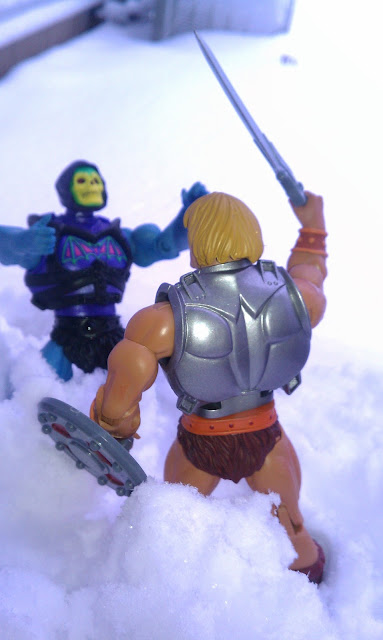 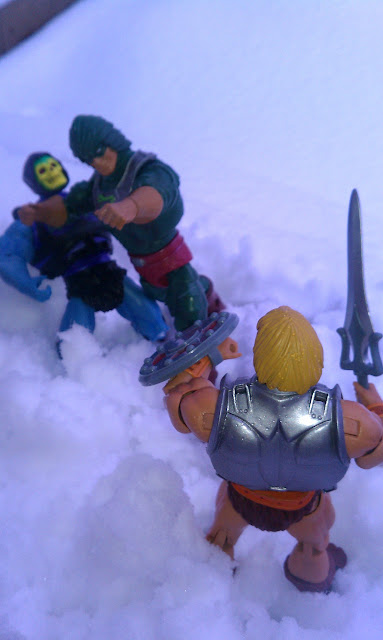 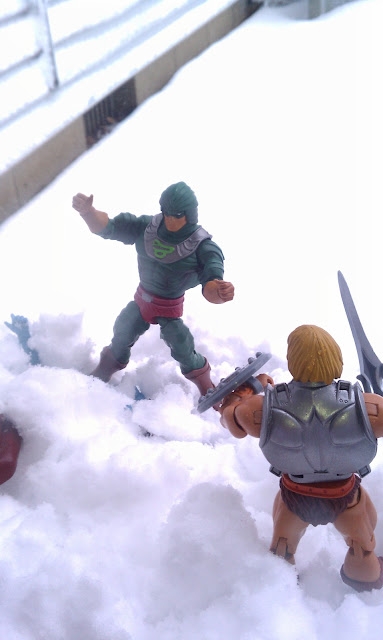