Pie is not a dish. It's a concept. Much like the pizza, the pie can be customized in almost any way you can imagine. Maybe even more so than the pizza, the pie leaves you endless possibilities. And I like the thought of that. And I would like to try out more pies in the future. 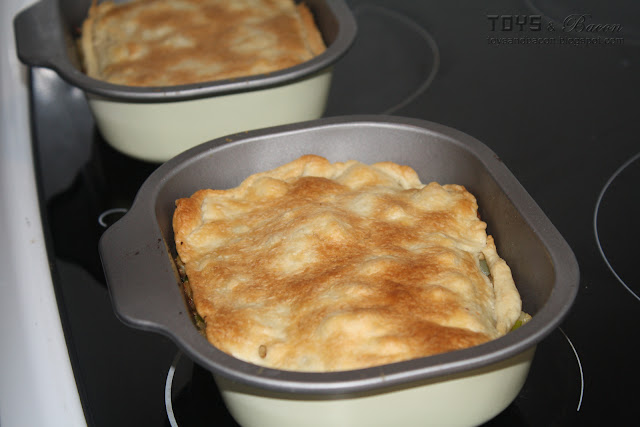 I'll not show you how to make pie, because I honestly don't know. Obviously, what I make here ends up being a pie, but the main part about the pie has to be the lid of pie dough. And I just don't know how to make that. All I know is that it's actually a bit tricky. Unlike the bread, which is extremely simple, the pie dough can't be made while blindfolded.

So with this dish, using leftovers from the new years turkey, I used a pre-fabricated pie dough.

Read on for "recipe".. and another rant about toys.

It's not really a big deal, nor is it any concern of mine. I barely even care, and in that way, you can't really call it a rant. Much like the recipe, that's just heated leftovers and a pre-made pie lid.

But the "big news" these days within the collecting community is that Toyguru, Mattel employee and brand manager on Masters of the Universe Classics has done it again. I almost feel sorry for the guy, he just can't catch a break. The guy has done a lot of good with MOTUC and other toy lines, but his screw-ups overshadow his accomplishments. 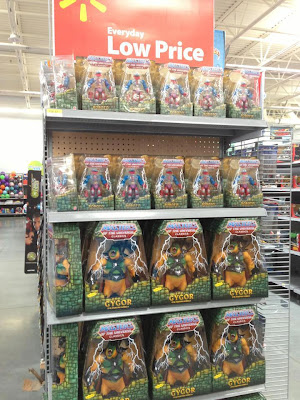 The biggest blunder was of course the recent Back to the Future Hoveerboard scandal. Yes, I'll go as far as to call it a scandal. The board was marketed as a prop replica, but ended up being a cheaply made, flimsy and faulty $120 toy far away from being screen accurate. Fans are outspokenly disappointed, and Toyguru doesn't seem to care a single bit.

But that's all in the past (like last month). The flavor of the month is the discovery of MOTUC figures in a California-located Walmart. What could be seen as just weird inconsistency from Mattel has turned into a proper farce.

Why is this a big deal? Well, first of all, Toyguru has many times stated that these toys will never see retail, and the entire concept is that you have to subscribe to get them. He has even used the no-retail as an argument for getting people to subscribe. I've complained about the subscription model before, and all though the rant is a bit outdated, some of the points are still very relevant.
Another issue is that these figures have been listed as "sold out" for a long time, and even though most fans have these already, there is an added factor to one of the figures.

But I see you are hungry, let's make some pie. 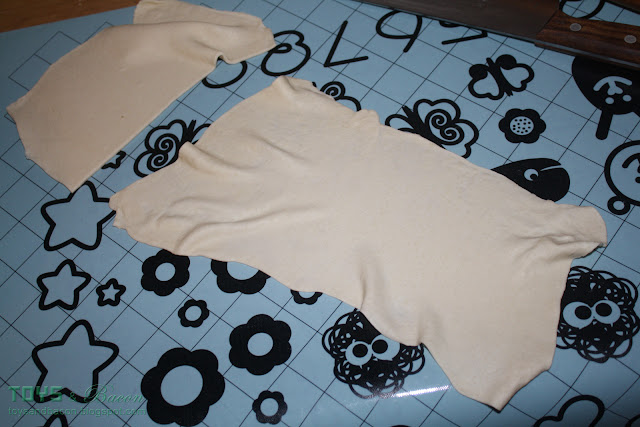 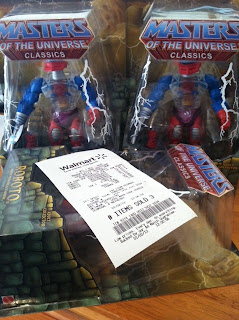 Ok, back to the discovery of MOTUC toys in retail.

The picture I showed earlier was taken by a member of the collector community. Immediately, people started question the authenticity. It could of course be a photoshopped picture. The picture was legitimate enough, as other collectors started confirming that the Walmart was indeed selling Masters of the Universe Classics figures, as shown in the picture to the right. Roboto was $15 and Gygor was $25.

Here's a big problem: While most fans already own these two - either by getting them through subscription, day-of-release sale, or a Black Monday sale - there is another factor to Roboto being available like this. He's been notoriously faulty, with the clear plastic breaking down almost immediately. Subscribers have been informed that it's impossible to get a replacement.

Fans started complaining. Why are Mattel making this move now, and at the same time insulting long time subscribers. Others chipped in with the thought of this not being Mattel, but a Walmart acting on their own, buying from a secondary seller. These weren't exactly popular figures, and one could see BBTS, Brian's Toys or other online toy stores dumping their left over stock.

The discussion went back and forth a bit, but ultimately concluding that this had to be Mattel's doing.

Cue Toyguru:
Took us a few days to get to the bottom of this one. Bottom line is these items were not sold to WMT. They appear to be at only one single location and this WMT aquired them on the secondary market from a third party. Mattel did not set up this end cap or this promotion. There are no plans for MOTUC to be distributed at retail at this time. Maybe the toy aisle manager is a big MOTU fan. Not really sure, but this is not a Mattel program. That i can confirm.

Indeed. This wasn't Mattel's doing, according to Scott Neitlich, Toyguru. Obviously no one believes him. The evidences piled up, leaving little room for this being second party sellers. It came down to the figures all being reissues, the amount of figures, the location of the Walmart, and many other arguments. There's also an element of "boy who cried wolf" to Toyguru's words.

Question is why they are trying to sell some leftover stock in a single Walmart. One theory is that they are testing retail possibilities with this line. The constantly increasing prices are scaring away subscribers, and an option to keep the prices down is obviously to go retail. I don't know, and I barely care one way or the other. But I do appreciate a good farce.

As well as a good pie. 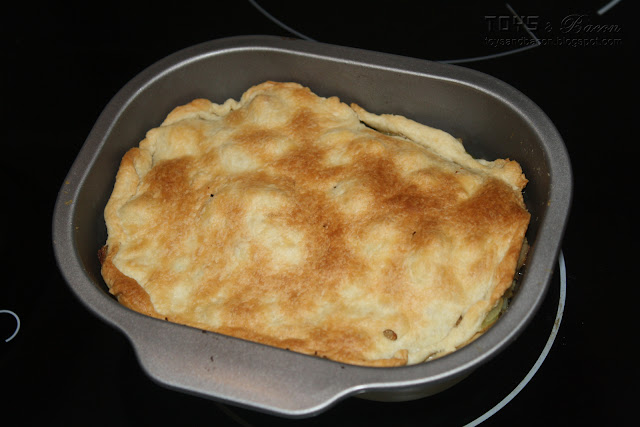