Happy New Year, good people! I hope 2012 was fortuitous for you all, and that 2013 will be even better. I'll at least start off with a solid one: recipes and ranting! (I should copyright that phrase) 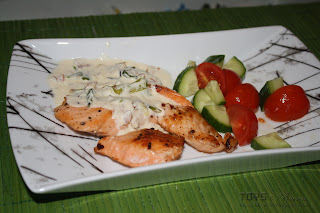 Read on for fried salmon in sour cream and almond sauce, quasi-asceticism, and a serious rant!

I'm not a fanatic, not in any field of interest.

If anything, I have an iherent distaste for obsessing. And that may come as a surprise, because I'm here writing passionately about toys. But the thing is, I have other interests as well. I follow various sports, I'm enthusiastic about music, I collect stuff not made out of plastic, I write stuff (obviously, but not exclusively this blog), and I find my self appreciating almost any other collector - or collection. As long as it's on the healthy side of obsession. And I have yet to mention that I have a job and.. uhm.. a normal life on top of all my interests.

I actually prefer not to be defined by my work. When people ask what I do, I find the question a bit strange. Do I tell about my work? Surely, I'm infinitely more than how I choose to earn my money?

I'd rather call my self an enthusiast, but then I'll run the risk of getting compared with the people with whom I'm trying to avoid a comparison: The single-minded. The people who have one interest - and obsess about it.

You've met the kind. The ones that just won't stop talking about their one hobby. It could be their pet, a sports team, or even something as mundane as what the neighbors are up to (which has become even more relevant with facebook). A sub-category of this last one are obviously those who are fanatics about celebrities, which just has to be the bottom end of interests. I get the part where people like a movie actor, musician or athlete. No problem. They are modern day heroes because of their specific skills. But the second people obsess, and start caring what the celebrities do in private, that's when they go beyond just healthy interest.

I have of course not mentioned the worst ones: The ones that won't stop talking about their lifestyle. You have the health fanatics, who obsess over a way of eating healthy or training. These are just annoying. By now, people know how to live a healthy life, they don't really need others telling them how to.

I'm talking about religious fanatics, who will try to force their way of life on to others. It's frightening and disgusting. Specially when it's done to young people, who have yet to build up wisdom and life experience to separate useful information from complete and total bullshit.

But I digress, because the topic today was based on the first kind of lifestyle fanatics, the nutrition and diet nuts. I'll admit, at one point, a few years ago, I was eating differently, healthier. And at times, I felt the need to tell people about it. But usually just because they asked me. Either they saw that I was getting slimmer, looking healthier, or they were just curious about my preferred meals. But during those days, I encountered a lot of crazy people. People who obsessed.

The last year, on the other hand, I ate pretty much what ever I wanted. And it was the best year I ever had. Fanatics can say what ever they want: Candy, cakes, burgers, bacon will make your life better.
I'm actually a big supporter of healthy lifestyles, as long as it's not interfering with a comfortable and enjoyable way of life. It can be done. So when a friend of mine asks me to cut back on the candy, potatoes and starch-filled recipes, and start doing some low-carb recipes, I'll gladly comply.

In fact, I'll do even better. I'll join her.

I need round of asceticism. A period of healthier eating. Me and millions of other people who make a new years resolution to eat healthier. The difference is that I know how it's done, I know what I have to forsake, and how difficult it is. I found it easy, but I know it can be difficult to many. Breaking habits is a legitimate challenge, and leaving the chocolate half eaten

Now, about the low-carb craze.. The idea is that if you substitute the carbs (any sugar and starch) with fat, the body will actually burn more fat. It sounds insane, but I can confirm it's working. But you cannot falter. If you end up eating carbohydrates on top of a high-fat diet, you can probably guess what's going to happen. 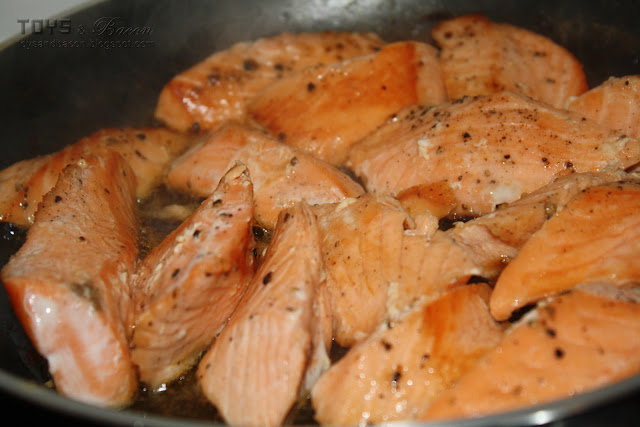 I'll join my friend. Not on the strict low carb diet, but rather a healthier way of life. No fuzz, just asceticism. I'll cut the candy and snacking. Tea instead of soda. Nuts instead of chocolate. Bacon instead of cake (hey, at least the low carb fanatics got that one right!). Another important factor is smaller and more frequent meals. The importance of this cannot be understated. This is where fruit comes in, or that third burger you made the day before, or that third egg you cooked earlier that day.

I don't plan on telling you how to live your life, but I will share tips and recipes on how to eat healthier. Fear not, I'll still have "normal" recipes as well, but they will be marked accordingly.