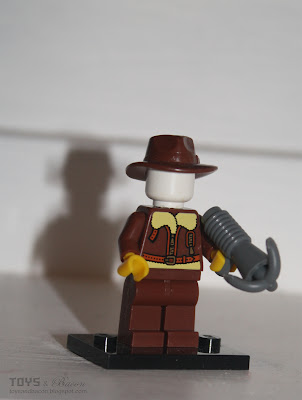 I mentioned one of my students last week. A great kid, creative and funny, even though he's barely reached his teens. He's really into superheroes and Lego, like any sane person should be. Last week he he brought with him to school two packs with counterfeit Fantastic Four trading cards for us to open.

And today I'm showing something he made me for Christmas. It's not uncommon for teachers to get gifts from their students, but it's usually cakes or flowers or something along those lines.

This, on the other hand, was one of the best gifts I've ever received. Let me break it down: It's something we both like, in Lego. It's home made, sort of, and actually well made. It's obvious he's made an effort with it. And finally, it was totally unexpected. Both the gift itself, and the character.

I saw what character he had made right away, as it was something we had talked about. But I had never imagined that character in Lego. I enjoy being surprised. My student has chosen to do some artistic deviations, which I found sensible. Other than that, I feel this is as close a minifig-representation of the character you could get.

I'll not tell more now. Can you see what character this is? Write below if you have a suggestion!
Posted by Jon at 7:45 AM