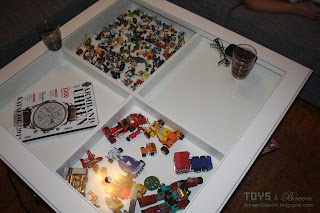 This is a continuing project, and I doubt I will ever finish it. How to display a large collection of toys in an elegant way.

I showed a few months ago how my coffee table looks like, and I also mentioned the Ikea Detolf display cabinet as a possible solution. Well, I bought one, and it's been sitting here for far too long, unopened. Finally, probably out of frustration, my girlfriend took responsibility and assembled it.

I can't fit my entire collection of toys in a single Detolf, let alone ten, or even twenty. But then again, I don't plan on showing off the entire collection in my house at all times. I do like the idea of a rotating display, where I will be active in what I put into my Detolf. At the moment, I'm thinking of getting a couple more of these, they are absolutely awesome, for the price.

They don't seem to take up a lot of space. Obviously, they don't take up more space than the size of the cabinet, but since the Detolf have four glass walls, and glass shelves, they appear significantly smaller than cabinets with wooden frames. The top has a slot for a spot light, which is something I'll consider. I'll also look into led strips. Relatively easy to assemble, once you get the hang of it, but due to all the glass, the entire package is very heavy.

I do wish they came with four shelves instead of three. But I have seen people get around this by placing acrylic cubes in the back of each shelf, and in that way As it is now, there's no point in displaying smaller toys, like G.I. Joe or the smaller Transformers, as they will create a huge gap of space between each level of toys.

Right now, I just placed a few bigger toys, more or less randomly. These where the toys I had lying closest to me, most of them have been featured in previous articles. The bottom shelf is a curious one, as it's at ground level. I had no toys I felt comfortable displaying that close to the floor, so I ended up with the basketball. Temporarily? Who knows. 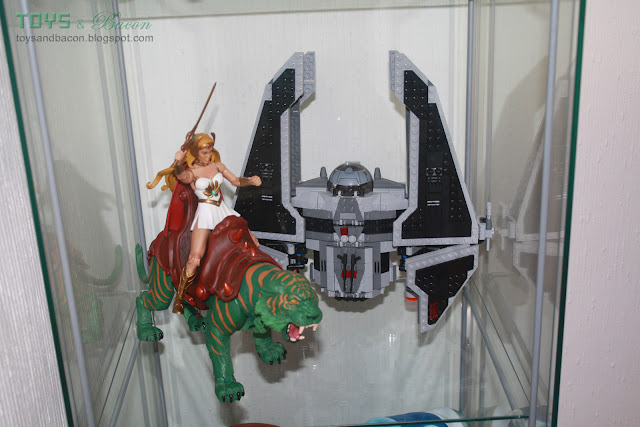 The first shelf contains the Sith Interceptor, which I reviewed a few weeks ago. We also see a helmet-less Masters of the Universe Classics Battle Cat and She-Ra. Neither has gotten face time in this blog, which is a shame. She-Ra is a cool figure, and Battle Cat is one of the best toys made in recent years. 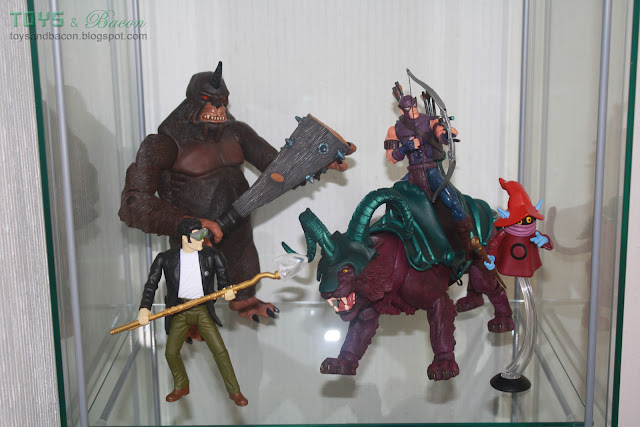 The second shelf has a couple of more MOTUCs, in Shadow Beast, Panthor and Orko. DC Comics Jack Knight, Starman, has been shown in this blog previously, as has Marvel Legends Hawkeye. 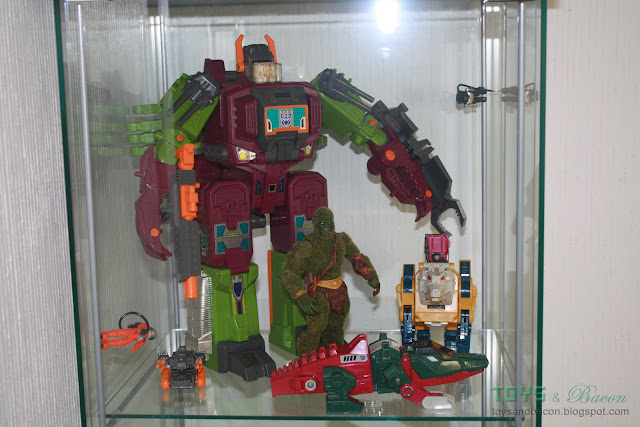 Top shelf has a couple of robots, including the extremely impressive Scorponok. MOTUC Moss-Man ranked high in my "Top ten Masters of the Universe Classics" (a list I plan on revisiting soon). Finally, I managed to sneak in a few StarCom figures. 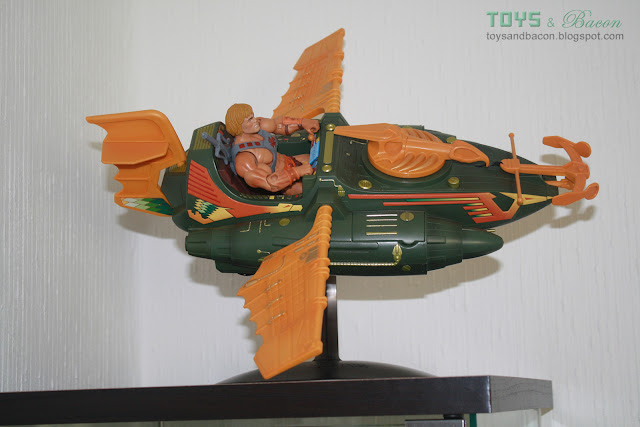 Top shelf, or rather on top of the entire cabinet, He-Man piloting the mighty Wind Raider, one of the most surprising toys to come out of the Classics line. Fantastic sculpt and paint, lots of play value and just an impressive sight when displayed like this.
Posted by Jon at 8:41 AM