One of my favorite G.I. Joe dudes is actually not a G.I. Joe. Nor is it a dude.

As you know, I'm a sucker for female action figures. It's a combination of how uncommon they were, and - I guess - something biological.
The way this toy was presented and sold, to the color scheme and play value, down to the fact that it has a rather interesting background story - it all makes for a great package, even if the figure itself has a rather ordinary sculpt. 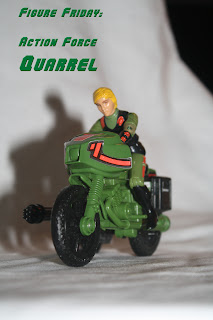 Read on for Action Force Quarrel!

The toy line had the sub title "A Real American Hero", and naturally it was extremely popular in the United States. With a name like that, you'd guess G.I. Joe wasn't suitable for the European market. Of course this wasn't true: A toy can have the stupidest name in the world, it will still sell if it's of high quality. Don't believe me? Two of Mattel's biggest properties during the 80s were called Barbie and He-Man.

So yes, G.I. Joe - A Real American Hero, for all the name was worth, was very popular in other countries as well.
But in the beginning the toys were being sold in Europe under a slightly different name: Action Force.

Action Force was a toyline made by UK manufacturer Palitoy. It was a 3 3/4 toyline with similar construction to the vintage Star Wars figures. Palitoy also made a 12 inch line called Action Man.
In the smaller scaled Action Force line, we saw sub themes like space, army, special services, nautical. The villains (the guys in red) were a terrorist organization very similar to Cobra. It was jolly fun, and as far as I know, it was very popular, not only in the UK, but also in countries like France, Spain and Germany. 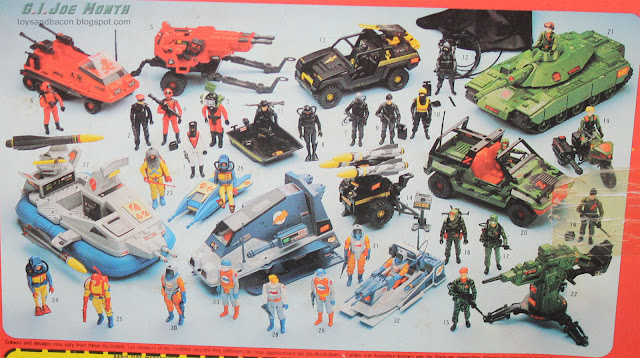 I don't know all the facts about early Action Force, but I assume that at one point, Palitoy started importing repainted G.I. Joe figures, repackaging them, and incorporating them into their Action Force line. It makes perfect sense, as the figures were the same scale, and pretty much their same theme. 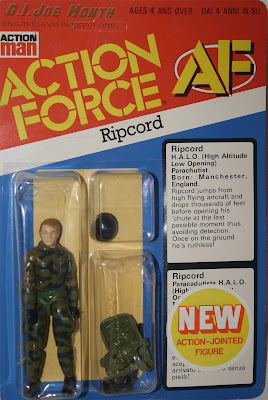 The picture above show mostly the original Action Force figures, along with repaints of G.I. Joe HAL (laser cannon in the bottom right corner), SMS (missile battery in the middle), FLAK. (red anti-air in the back), VAMP (black car), MOBAT. (tank) and of course the subject today: the green repaint of the RAM. and Scarlett.
All these were given new names and new factions. For instance, the FLAK cannon that in the US was a property of the heroic G.I. Joe team, came with a (ridiculously awesome) repaint of Cobra Commander called Red Laser.

All these were G.I. Joe toys from the first two years of the line, 1982 and 1983, and the repaints from Palitoy were released in 1984. A few other repaints also saw the light of day, like the command center, the Cobra Fang, Cobra Hiss tank, Destro, Gung-Ho, and a few others.

The next year, Palitoy followed with a few single carded figures that weren't repainted, but sold on the Action Force card, like the Rip Cord to the right.
The name Action Force stuck with the European line through the 80s, even when the toys were being released by Hasbro, and being identical to the US releases. Even the comic was called Action Force - International Heroes.

A great resource for anything and everything Action Force is the Blood for the Baron website.

So, Quarrel and the "Rapid Fire Motorcycle" are a repaint of the 1983 swivel arm Scarlett and the 1982 RAM, packed together, and obviously given new names. 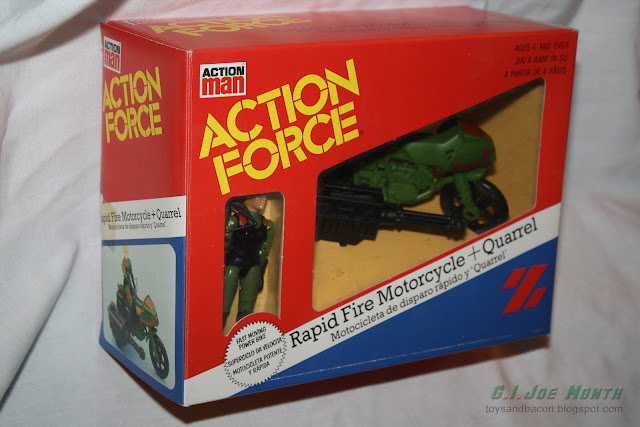 Unlike the vehicles in the G.I. Joe line, these didn't come with unique art, but with a clear window showing the actual toy. There's something really old fashioned about this box, no nonsense. I'm absolutely in love with the way this toy was being sold. It's deliciously vintage.

Notice that the box says Action Man and Action Force. Much like Hasbro's G.I. Joe line were originally a 12 inch line, the UK Action Force line also has its 12 inch counterpart in the Action Man line. 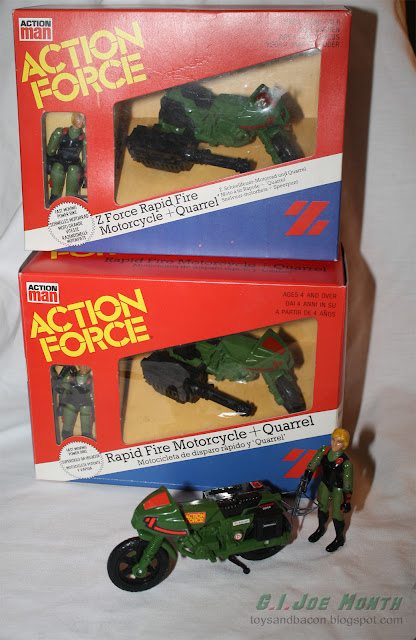 Both these boxes are trilingual. English, Italian and Spanish on the bottom, German. French and Dutch on the top box. This goes for the names as well as the instructions and blueprints.
The set comes with a sticker sheet, blueprints, the Rapid Fire Motorcycle, and the Quarrel action figure in her very own bubble. On the back of the box, there's a picture of all the other figures in the line. 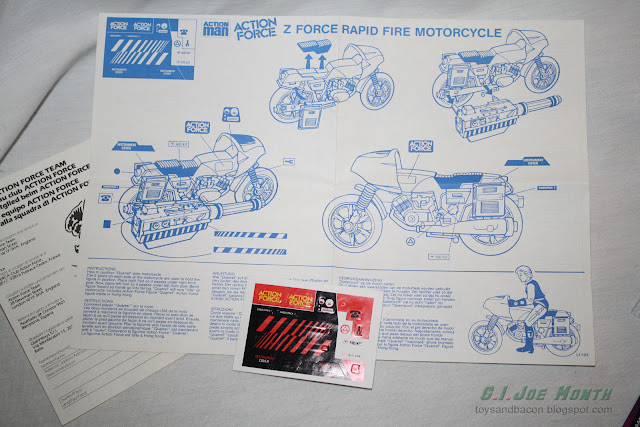 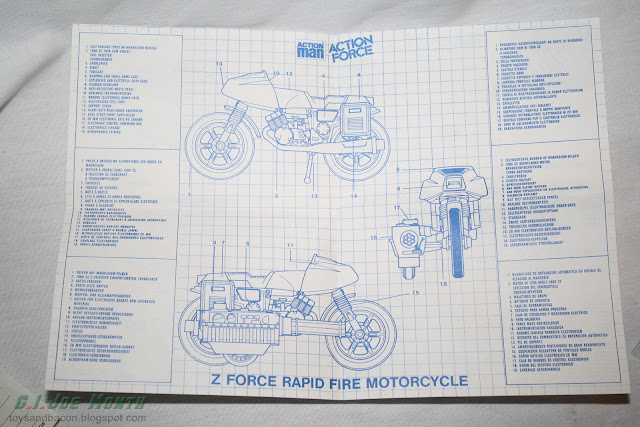 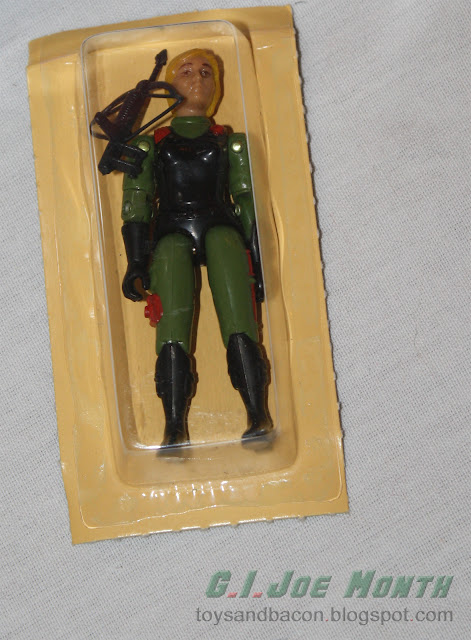 Quarrel was mentioned in the top 100 G.I. Joe figures. In fact, she was within the top 20. This may seem strange, as the figure is rather ordinary. In fact, it doesn't even have peg holes in the feet. She comes with the crossbow, just like Scarlett. 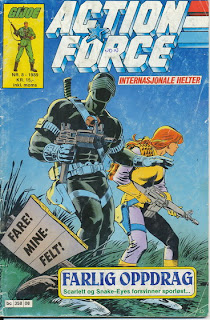 Many complain about this sculpt, and with good reasons. Scarlett was a main character in both the comics and the cartoon. And she was never really given a proper figure.
The original G.I. Joe figures from 1982-83 were a lot simpler than the figures from the following years. Both in terms of construction, sculpt, accessories and paint details. Most main characters from the first two years were given solid updates of their original toy. Snake Eyes for instance, who was among the original 13 from 1982 - he got his best known version in 1985 - a fantastic sculpt, tons of accessories, remarkably similar to his comic/cartoon visualization.
1985 Snake Eyes is one of the best toys ever made.

While Scarlett, was left with her 1982-83 version, with a face that doesn't at all resemble the way we saw her in the media.
I'm not complaining, but I don't hold the Scarlett figure in the same regard as the 84 Storm Shadow or the 85 Snake Eyes, simply because she doesn't at all match the image of her from the comics. 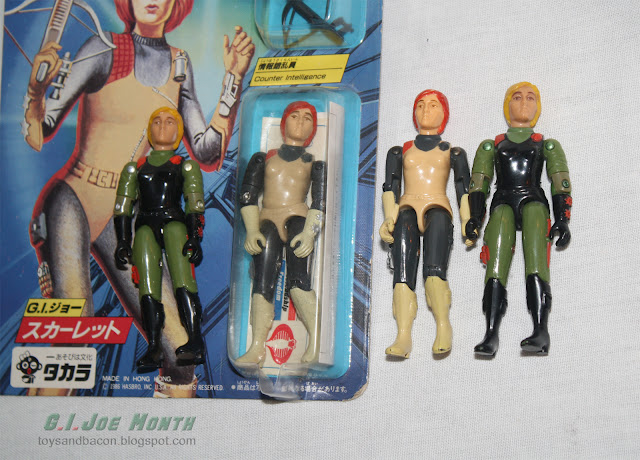 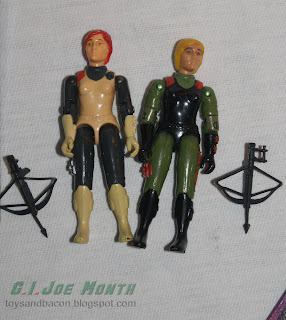 Quarrel is a bit different.

First of all, I don't have an opinion of how this character looks, other than the toy. It's all up to my imagination. I can for instance pretend that Quarrel actually has short hair.
The file card places her as a Swiss renaissance woman, capable of pretty much everything, including martial arts, competitive motorcycling and extreme violence. I like that.
Then there's the fact that she has colors that translate better to a toy. The yellow/tan gloves of Scarlett just looks weird, but the black and dark green colors of Quarrel looks great. Even the face has better paint than Scarlett. It's very subtle, but the face with it's darker skin tone and color combination, just looks good.

Sure, she still doesn't have the better sculpt, details and accessories of the female characters post 1984, like Baroness or Lady Jaye, but she looks a lot better than the Scarlett action figure. 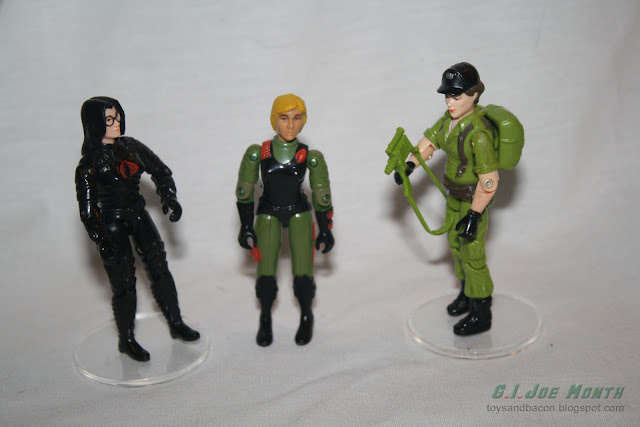 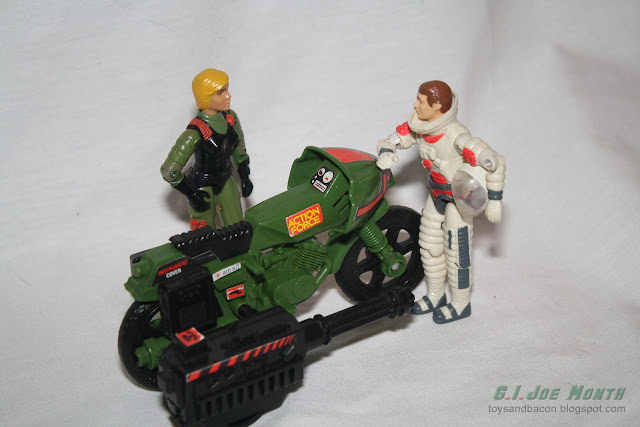 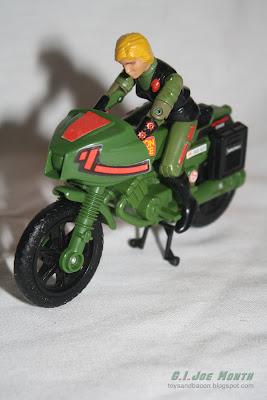 Keep in mind, it's not that I dislike the 1982-83 figures. They do have simpler sculpts than the toys that would follow. But there's still a lot of details to love. Look at Ace and Quarrel here. Both from 1983. I think it's about complexion. They have more than enough details to their costumes, it's just that they look... less natural. Reason that there's such a difference between 82-83 and 84-94 is of course that Hasbro struck gold with G.I. Joe, and assigned more artistic talent to the line.

Quarrel had a life beyond the 1984 Palitoy release. A stock surplus of the toy was sold/given out during a Joe con in the late 90s, with the name "Undercover Scarlett".
Quarrel has always been popular among collectors for the fact that it's a toy exclusive to Europe, and that it's a new, female character - a rarity in the G.I. Joe universe.

Today, these toys cannot be regarded as rare. Rest assured, it may look completely over the top to have two boxed and two loose figures, but they're not expensive if you know where to look. Specially with the extra figures being given out at a convention.

I'm fascinated by Quarrel. It's the right amount of fun for a collector. It's a great toy for its time, it's a new character in the mix, and it's something European.

are you open to selling once of the boxed rapid fires

are you open to selling one of the rapid fires