The last two vehicles in the line are controversial. They represent many things the Joe fans didn't want to see in this line: Space, mechs, bright colors, giant chainsaws, completely unrealistic and absolute sillyness. 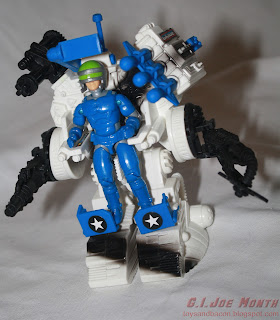 And I love them.

Read on for the G.I. Joe and Cobra Power Fighters. The end of the line!

I've talked about the Star Brigade on numerous occasions. It was Hasbro's attempt at modernizing G.I. Joe as they tried to compete with Power Rangers and other early 90s toy lines.
Of course, the Joes and Cobra went into space already back in 1987, with the Defiant Space Shuttle Complex, and a couple of monumental issues of the Marvel Comic. But it was more of a plot line in the stories, it wasn't a main theme in the toys.
Before Star Brigade became an entire sub-theme, I we had no more than 5 space-related figures: Payload (1987/1989), Hard Top (1987), Star-Viper (1988), Astro Viper (1988) and Countdown (1989).
Then in 1993-94, we suddenly got like thirty of them.
Keep in mind, G.I. Joe always had that sci-fi element, but the full out space combat didn't occur until 1993.

We saw a few new sculpts labeled "Armor Tech", they have no resemblance to Joes. In fact, they remind more of the sub-line of Transformers called Robot Masters.
The rest of the Star Brigade dudes were repaints of previous figures, like Countdown and.. Barbecue (?). Yes that's correct. Initially, Hasbro had planned on using the absolutely fantastic 1987s Payload sculpt for the 1993 Star Brigade. It would have been monumental to see this mold get more repaints. But either the mold got lost, or Hasbro borrowed it to some South American or Indian toy manufacturer... Either way, Payload 1989 was the last time we saw this, the most realistic space dude in the line. Next time Payload was released, he had a green firefighter suit. 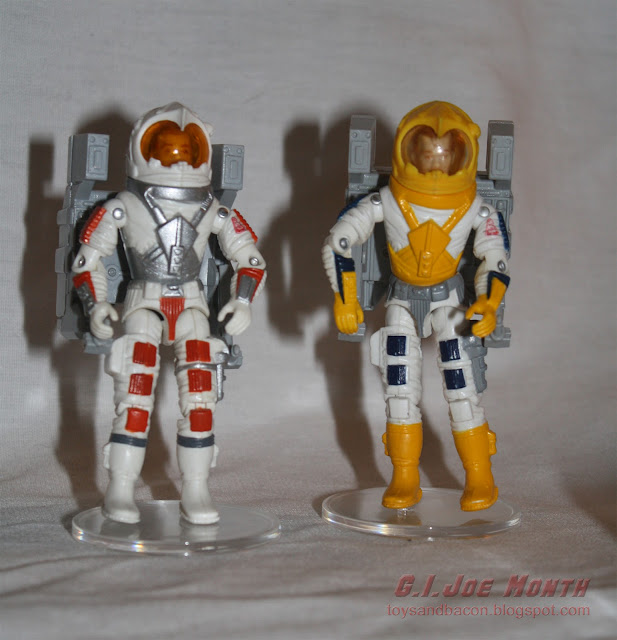 But this wasn't about Payload....

The Power Fighters are what they are. They make absolutely no sense. They don't look particularly mobile. They are far too colorful to be used in combat, yet the only action they are capable of doing is just that: combat. They are not shielding the pilot from damage, but I guess they could have some sort of force fields.
But all this is irrelevant.

Just look how cool they are! 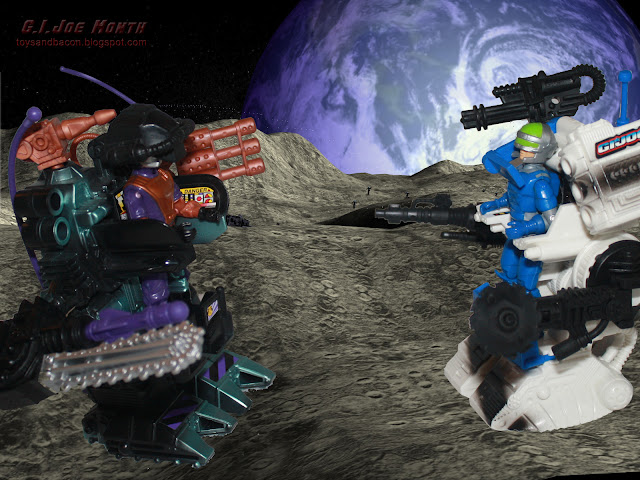 The G.I. Joe Power Fighter is blue and white, with big, dark camo-stripes. I guess you could say it's not that colorful, and would be able to hide on lets say, the moon. But the pilot is bright blue, and would cancel out any camouflage the Power Fighter has.

The mech has plenty of moving parts and some really detailed stickers. The blue missiles are of course spring loaded, and can fire with the push of a button. A detail I really like is the panel that move down in front of the pilot's face. 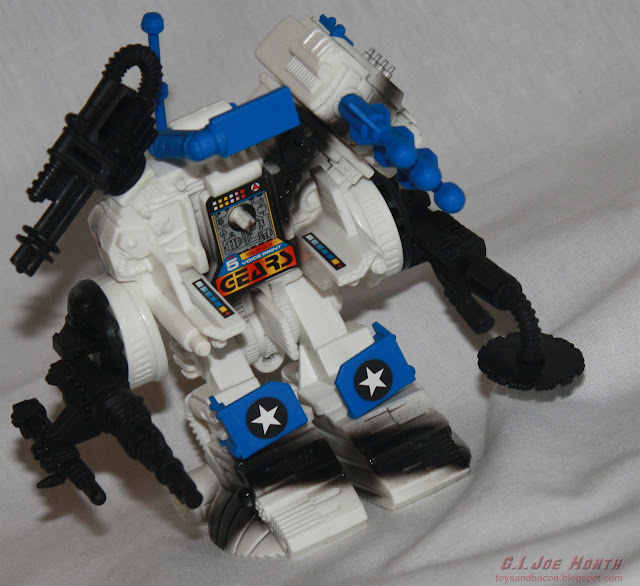 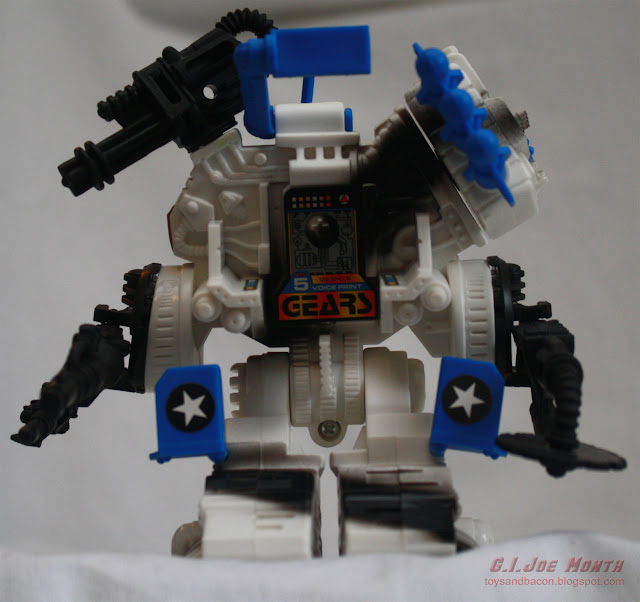 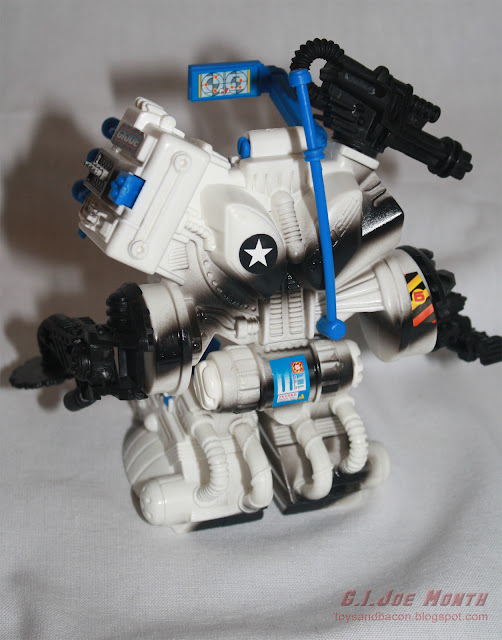 Where the G.I. Joe Power Fighter really shines is of course the pilot. While the mech is a bit unassuming, the pilot is absolutely Gorgeous.
His codename is Gears, and yes, he did reach the top 100 best Joes.

What I like about this guy is the simplicity of the paint. Like I mentioned when I talked about Budo, the last few figures of the line had extremely simple paint jobs. Maybe to save money? Either way, I prefer that over the alternative. That's not to say I don't prefer details in the paint, it's just that a great sculpt doesn't necessarily need paint jobs to compliment it. Rather a paint job that contrasts it.
Many of the figures late in the line had amazing sculpt, but were ruined by absolutely awful paint.
Case in point: Dr. Mindbender (1993), Gristle (1993). In fact pretty much every figure from 1993. 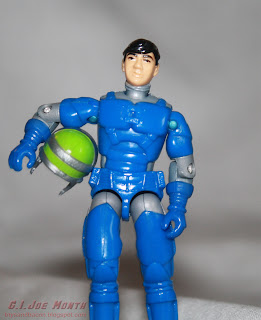 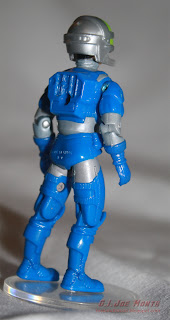 Gears stand out among the Lego-color palette Joes. First of all, it's for some reason less stupid to have a bright blue suit in space. Secondly, he doesn't have a stupid contrast color, it's just gray. The green visor in his helmet does seem very bright, but then again, it's supposed to represent a translucent green visor.

The fact that the colors of Gears is this understated just makes him more impressive.

A really cool detail is the protruding mechanism on his back. This feels like a connection point where he would attach to his mech. And as you saw in the pictures above, there's no doubt that the Power Fighter belongs to Gears. It's even "Voice Printed".

I'd like to contemplate a bit more about why I like this figure by using the Masters of the Universe toys as examples. I talked a bit about this when I made a list of the ten best MOTUCs. One thing I really like about specific Masters... are that they all have their own color scheme, usually composed of 3-4 colors, among them a neutral color. 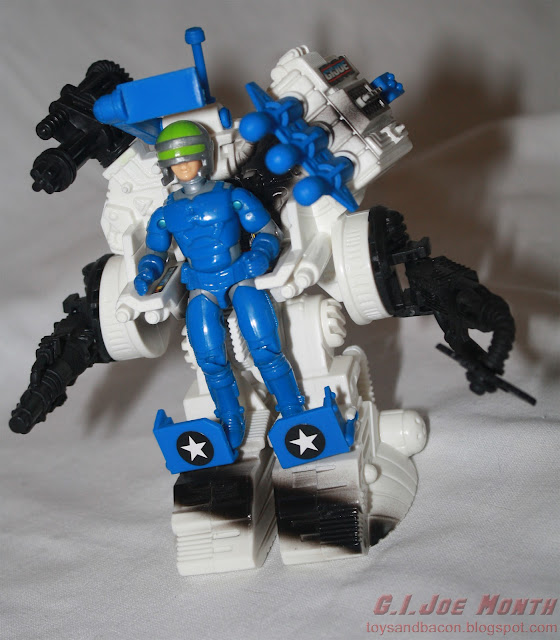 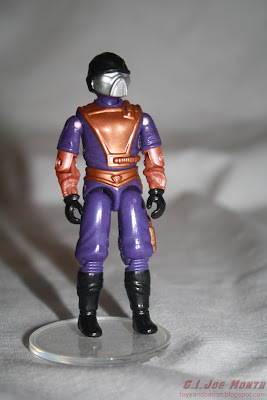 Gears remind me of a MOTU figure, in terms of design. Had he been 6" and if he had a silly gimmick - like robotic stilts or a chest that opened to reveal a nuclear heart, or maybe a weapon that shot bubbles or slime - he would fit right into the MOTUC line.

The pilot of Cobra's Power Fighter, Techno Viper v2, has a lot of the same qualities. He has a very simple, yet effective color scheme, and I really like that he has retained somewhat the colors from the first version, which was purple and black.
In addition, he has a bronze color to his chest and belt (which is surprisingly shiny), and a silver application to his mask. He just looks incredible.

Without doubt one of the best repaints in the line, and a great use of a cool sculpt.
I will admit, I don't really know how it is these days, but a few years back, Techno Viper v2 was valued by most collectors for the fact that he looks awesome, and that he was slightly hard to come by.

Techno Viper's mech is in my eyes the absolute winner. It's just mad! Insane! Only Cobra would make a mech with a giant chainsaw!
I also prefer the colors on this over the Joe mech. The green metallic shine to it just makes it more pleasing to the eye. I kinda wish they hadn't given both mechs the big dark stripes to the paint.
As with the Joe mech, the Cobra Power Fighter comes with some really detailed stickers, and lots of moving parts. All the weapons can move, as can the feet and the visor. 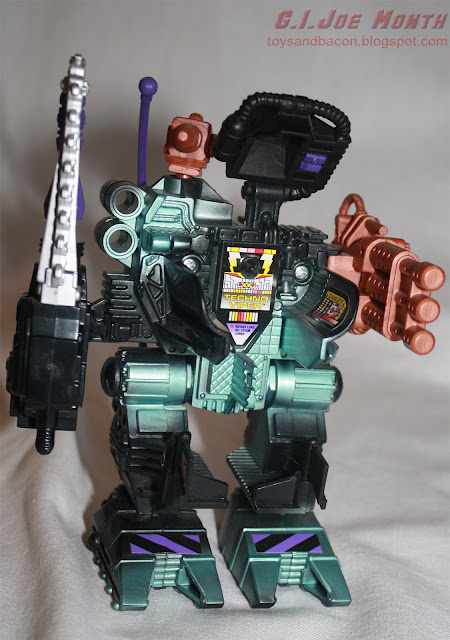 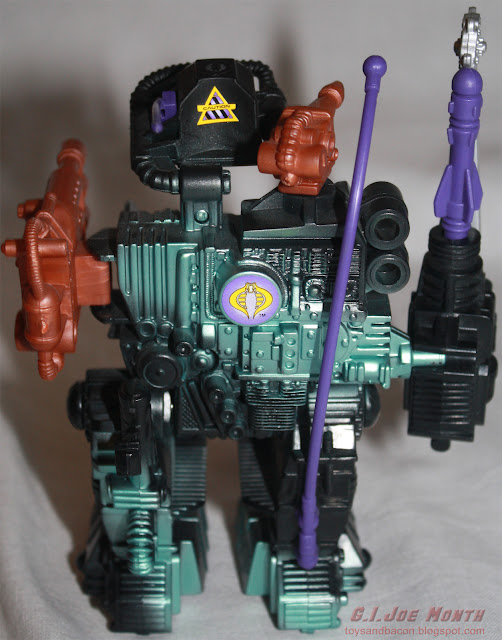 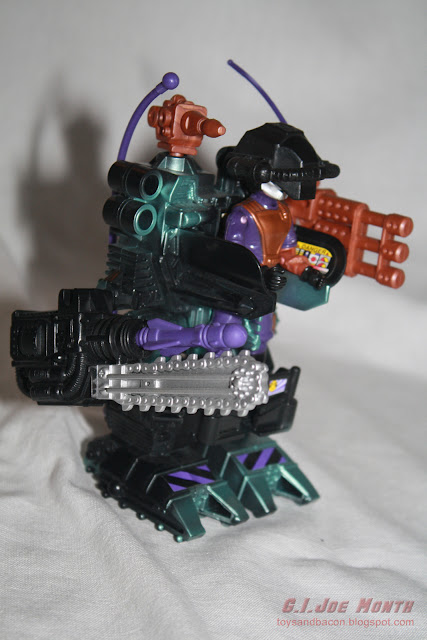 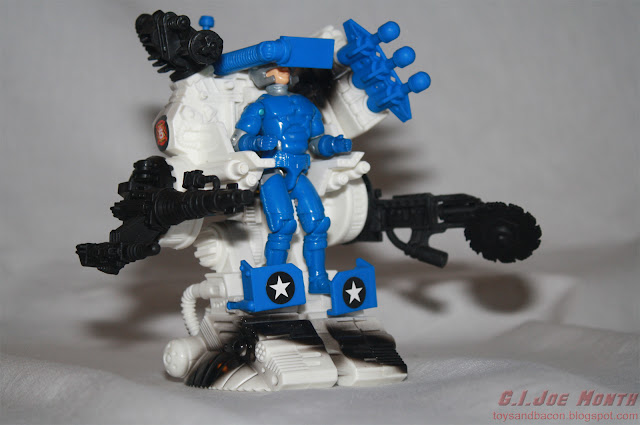 These two toys are underrated. In fact, I would guess that many Joe collectors doesn't even know of their existence. They rarely get any mention when there's talk about vehicles in the line. That in itself isn't surprising, as there was a massive amount of legendary vehicles. And the Power Fighters as the last two vehicles, it's really a sad way to end the line.
But at the same time, they are great toys, colorful, has good play features, and both came with insanely cool pilots.
Posted by Jon at 9:55 AM

They sucked!! Part of the garbage that ended the line........if Hasbro had just went ahead with the next years planned return to military based figures and vehicles i believe it would have saved the line

They kind of did, Anon. Read http://toysandbacon.blogspot.no/2012/12/sgt-savage-and-his-screaming-eagles.html

All though it certainly wasn't more of a success than the space theme and color changing ninjas.

What are you two guys crying about?..These Power Fighters are absolutely awesome! Much like the rest of the Star Brigade line...it added some depth to the line. I wish they would have continued it along with some more interesting vehicles. What ended the line was those darn Power RANGERS! Damn you p\Power Rangers!!

What are you two guys crying about?..These Power Fighters are absolutely awesome! Much like the rest of the Star Brigade line...it added some depth to the line. I wish they would have continued it along with some more interesting vehicles. What ended the line was those darn Power RANGERS! Damn you p\Power Rangers!!