Here's a toy with an interesting history: Not actually part of the G.I. Joe - A Real American Hero toy line, but instead an indication of what the toy line could have looked like had it not been canceled in 1994.
Still, what I (and most Joe collectors) choose to call Ninja Commando Budo, instead of the name it was released with is a cool looking, if somewhat simple toy. 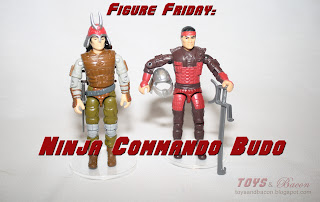 
I'm not sure I've mentioned this before, but the G.I. Joe - Real American Hero toy line lasted from 1982 to 1994. It was a good run, most action figure lines never last that long. I will not go into the reasons for the cancellation today, that's a topic (with lots of speculation) for another day. But I'll say that there was something unfulfilling about the way G.I. Joe ended. There was still unrealized potential. And this is absolutely backed up through what we have seen of prototypes and ideas for the unproduced 1995 wave of figures. There's a lot more about this in yojoe.com's archive for unproduced G.I. Joe toys.
Admittedly, not all of it looks equally exciting. One idea was having the Joes and Cobras continuing their battle in space - with some alien empire thrown into the mix, parasites, transforming Joes, it would have been an absolute train wreck. We had already been treated to the Star Brigade sub-line, with tons of repainted older figures. But here's the thing: In 1994 we suddenly started seeing more new sculpts for figures, even in the sub line of Star Brigade. 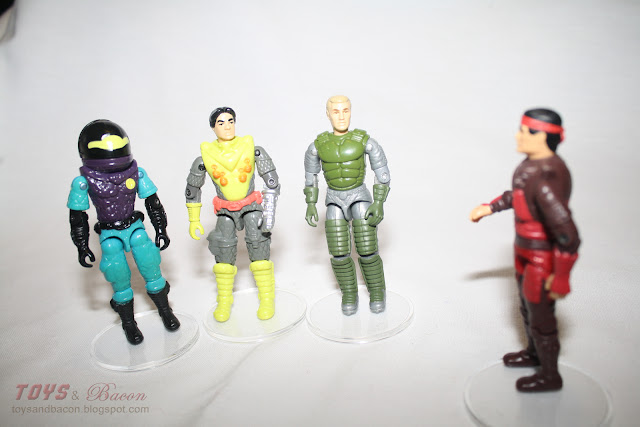 Here's Cobra Commander, Sci-Fi and Duke. Neither of them have particularly advanced paint jobs, but they all have extremely detailed sculpts. Specially the face sculpts are gorgeous.
Of course, Hasbro felt the need to cram those rocket launchers and other gimmicks into every toy they made, so they all have lame accessories that far from match the figure design. 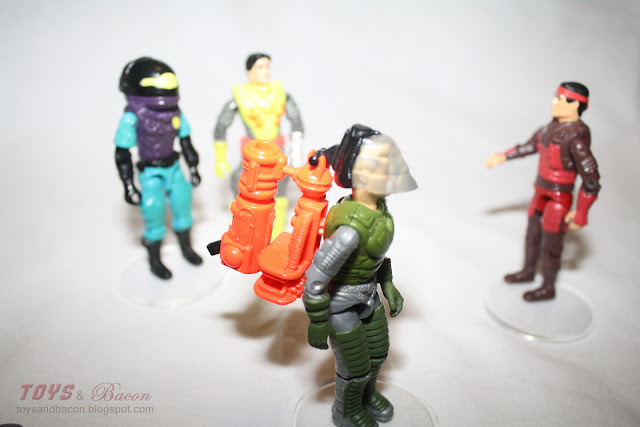 Cool sculpts by end of the line... I still believe the continuation of G.I. Joe Star Brigade would have been hilariously awful.
Another sub-line was of course the Ninja Force. Ninjas was always a popular topic in the 80s, mostly thanks to G.I. Joe and comic writer Larry Hama. The thing with Ninja Force was that they were running out of proper ninjas. Late in the line, the military mercenary Firefly was suddenly revealed to be a ninja, and by the looks of it, the 1995 line would have yet another weird selection of non-ninjas suddenly dressed in kimonos swinging swords. Road Pig and Flint was part of this Ninja Commando sub line. Utter madness! Road Pig was the mace wielding biker and Flint was the prototype of a cocky army ranger.
But there was one character that would actually fit this sub-line perfectly. A character that had not yet seen a new version or a repaint: Budo.

Budo was originally part of the excellent and underrated 1988 wave, which I talked about in the very first Figure Friday. He's obviously not a ninja, but a samurai. Already as kids, we are taught that samurais and ninjas were sworn enemies - almost like cops and robbers I guess. Anyway, the 1988 figure is fantastic, one of my favorites as a kid with good reason. He's got a natural colors and a very detailed armor. He also came packed with swords and had a cool helmet. Only in the G.I. Joe universe would they send a guy in ancient armor, wielding swords out to fight an advanced terrorist organization. 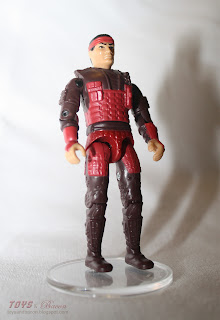 And in 1995 we got the new version of Budo - as part of the Ninja Commando sub-line. Sort of...
The line was canceled, but that didn't mean that Hasbro stopped producing action figures. And Budo was one of those that were so far into production that it made sense to use it somewhere else.
Hasbro already made toys for video games like Street Fighter and Mortal Kombat, and Budo was simply given a repaint and released as "Movie Shang Tsung" - A character in the Mortal Kombat universe. So this way, Joe collectors were still treated with something that in essence was a G.I. Joe figure.

The sculpt of Ninja Commando Budo (Yes, I refuse to call him Shang Tsung) is very similar to the old one. He still has that medieval armor going on, no pouches or grenades to be seen. So it's definitely a decent sculpt. It may be a bit simpler than the kids would appreciate. He also has a very simple paint, and honestly, I'd preferred a bit more painted details. Like the 1994 Star Brigade guys, he has an excellent headsculpt. 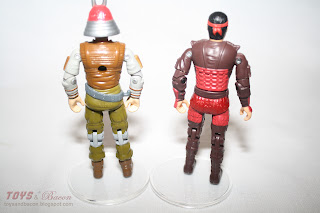 He came with two swords that we previously had seen with other Ninja Force figures as well as a brand new sculpted helmet. He also has a slightly different sculpt when compared to normal Joes. He has a sword-swinging action feature, and I'm not really sure if he even has an o-ring. As you can see, he doesn't have a peg-hole in his back like his predecessor. His head is not on a ball-joint either. It only turns to the sides.
Had he been released in the 1995 Joe line, he would without a doubt featured rocket launchers or something as well.

His helmet and weapons are of a very soft plastic, I guess to prevent them from breaking, but it all feels a bit cheap. The figure as well seems slightly more brittle and "cheap" than the original Joes. Far from feeling like a knock-off or some lesser toy-lines. But he just feels different that for instance 1988 Budo. 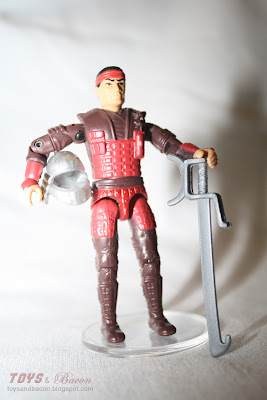 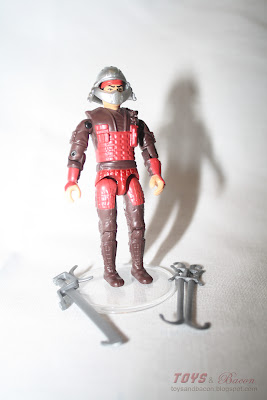 I'm not sure what I think of this figure. On one hand, I really like the natural looking sculpt and the idea of including the samurai in the ninja theme. It makes a lot more sense than including most of the other characters.
At the same time, he is a bit boring. While that may be attributed to the plain paint job, I know that Hasbro's way of making toys more exciting was to include a spring-loaded rocket luncher.
Either way it's a very interesting toy for the historical reasons. A reminder of a toy line that had outlived itself, and how the toy designers tried to keep it alive. 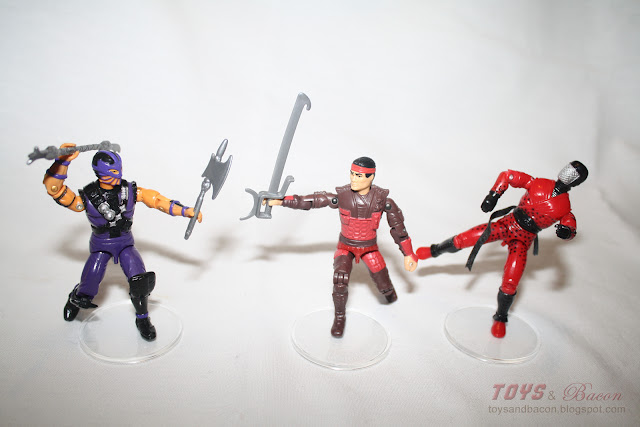 Way more than just sweet. I really wish the ninja comandos line was released. Looked better than ninja force and I like ninja force.

Way more than just sweet. I really wish the ninja comandos line was released. Looked better than ninja force and I like ninja force.