What do Superheroes Eat?

Most of us are hungry, and some of us even like to eat. Yet, you rarely see superheroes eat. Sure, it happens on occasion in the comics and cartoons. But you rarely get to know anything about the eating-habits, and preferred food of the superheroes (well, apart from Galactus of course).
So I wonder... What do superheroes really eat? 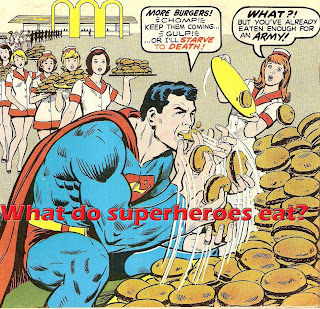 Read on for what should only be considered speculations based on my knowledge of superheroes.


Being a superhero is bound to burn a lot of calories. It's surprising how rarely food is the topic in superhero comics. A rather obscure comic from DC, made by Chris Claremont (of X-Men fame) has a character who constantly has to eat. He's telekinetic, and apparently, his superpowers burn away the fat at an alarming rate. He's therefore constantly seen eating hamburgers. We've also seen similar ideas used for the fastest man alive, Flash. But really, any superhero should have a higher metabolism than a normal human. They would have to eat a lot more, and a lot more often. But food is barely mentioned in most superhero comics. Obviously, this is really an article for fun, but it's weird how such an important aspect of life is missing in these stories.

Here's a rather short list of what I think some of the most famous superheroes would prefer to eat. 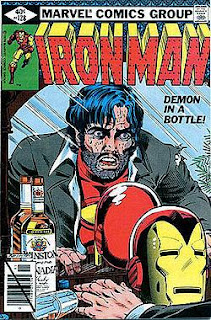 
Anyone who has seen the two movies know what Tony Stark likes to put into his body. But he would not be a particularly good superhero, nor would he be alive if the only thing he consumed was alcohol. In the comics, the issue of alcoholism is well known, and has been part of the best story lines, and probably the most recognizable of all Iron Man covers.

As a billionaire, one should also assume is Tony used to fancy meals. You know those meals where something as simple as mashed potatoes is called something French sounding, like puree d'pommes.
Tony Stark may be rich, but he's a man of simple needs. Something good to drunk, fast cars, fully powered suit, at least one random hot girl. He's like most guys. His taste in food reflects this.
In the movie, we see him eat both burgers and pizza, so obviously we can assume he has a very ordinary taste when it comes to food. And I have to agree with him. A good pizza has everything you need in terms of nutrition, it tastes great, and for Tony's part - you can eat it with one hand while you make weapons of mass destruction with the other.

I've wondered. Let's say The Hulk eats an entire pig. Then falls asleep and transforms back to Bruce Banner. What happens to the pig - or more specifically, will Banner's stomach explode or not?

In The Ultimates, Hulk has a minor skirmish with the alien mastermind that tries to destroy the world. Hulk eats the alien.

The Hulk eats: What ever he wants! 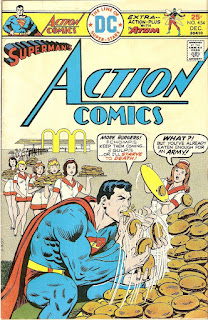 The last son of Krypton doesn't have it easy. You know as a farm boy he's been bred on chicken stew, corn, pumpkin pies and mommas home made everything. And that's all good.
Except that Superman isn't human. I don't know Superman all that well, but I assume they don't have human food on Krypton. And I assume their physiology is not adapted to run on the food we have here on our earth. They're doing the crystal thing, right? Maybe Kal-El's actual diet should consist of some mineral-heavy meals? Quartz for breakfast, topaz for lunch, granite for dinner, silicon for supper.
Superman's physiology is of course altered  by our yellow sun, and he'll easily resist any danger associated with having the same dietary habits as the rest of us. But one can never assume that they had corn and chicken stew on another planet, which lends the question: Could Superman actually just eat anything here on earth and get away with it? Could his body run just as smoothly on melted iron as it would on cherry pies?
One would think a do-gooder like Superman would notice the gradually decreasing food supply in the world and eat what ever substance there is most of in the world at all times.


Spider-Man is such a good guy. He's like you and me, if we got superpowers and didn't let it go to our heads. He's still eating his meals that his aunt prepares. He's still probably calling his wife, MJ to find out what she's made for dinner... 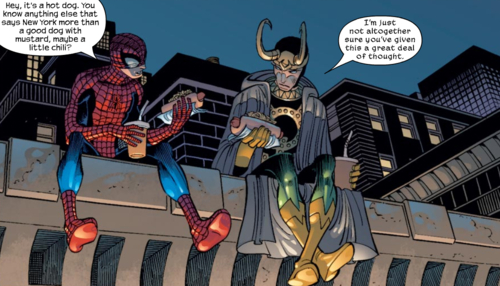 ...All the while he wants to eat nothing but bugs and flies.

Spider-Man's physiology is probably just as close to a spider's, as it is to a human. Now for the weird part, think about this: A human shares something like 50% of it's DNA with a spider. And Peter Parker is even more spider than that. Now, think of this: It's basically a western world thing to not eat bugs. In countries where bugs are of a certain size, and ahem.. waffles are harder to come by, they have to eat bugs. Bugs are nutritious, they are numerous, and for all I know they taste good.
There's no reason Spider-Man isn't longing for a good fat fly instead of Mary-Jane's breast and buns.
Still, we get back to the fact that Pete has refused to let his super powers go to his head.

Spider-Man eats: Something home-cooked by Aunt May or MJ

In the relatively fresh movie, Thor is seen feasting in Asgard at least twice. The Asgardian gods seem to be eating something very similar to earthen food, and I can only assume it's mostly roasted goat with gravy and honey brewed mead.
But then Thor is abolished to earth and is presented with the food from a cafe in a tiny town in New Mexico. Guess what? Thor loves it. His affection for the local coffee is even used as a way to show how Thor is not only unaware of earthen customs, but also how he's actually able to adapt.
Now, Thor is a big guy, he'll need lots of proteins to rebuild his muscles after combat, and with the similarities between Asgardian and earthen food, I can only assume he's eating chickens and drinking protein shakes.


Like with Tony Stark, Bruce Wayne is a wealthy man. He could afford to have Alain Ducasse and Jamie Oliver living in Wayne Manor, preparing all his meals if he wanted to. Tony Stark is the sort of eccentric that could actually do such a thing - have top chefs make him pizza.
The Batman is a different breed. He's all business. And when I say business, I mean fighting crime. That's all that matters for the Dark Knight, and he doesn't have time to wait for dinner to be made, nor has he time to eat it.
Batman doesn't have fun. Food is something that makes his body function.

Again, this is simple speculation. What do you think superheroes eat? What other superheroes have weird diets? Let me know!
Posted by Jon at 10:41 AM

Eliot S. Maggin in his classic novel "Superman: Last Son of Krypton," describes Kryptonians as "tuned up humans." He described in detail their adaptation process after they came to Krypton as one that would produce the powers of Superman. As such, he would eat what we eat.