5 Toys that Avoided Me

A very personal blog entry. I want to share my thoughts on five toys I really wanted, but for various reasons I missed out on. 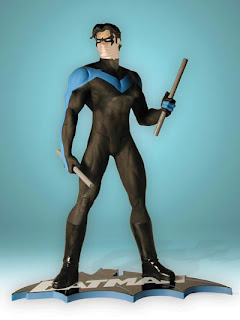 I guess I was spoiled as a kid. To a certain extent, I got the toys I wanted. For instance, my original collection of 80s G.I. Joe count close to 150 figures and something around 50 vehicles. This was a lot for a kid, and I recognized that even back in the day.
Even so, there were quite a few figures I didn't get, either because they had been discontinued or because I never found them. It always thought we got a very specific assortment in my country, and trips to other countries seemed to confirm this. My "lost cases" of G.I. Joe figures is an entire entry on it's own, so no G.I. Joe figures today.
Availability was one thing. My parents' (and whoever bought me toys) willingness to get certain toys was another. I got quite the handful of big playsets and vehicles for my various toy lines, but there is a line somewhere, and the biggest sets could be expensive. I hope I understood that then. I definitely understand it now. Even as an adult toy collector, with a regular, well paying job, you just cannot get any toy you want. 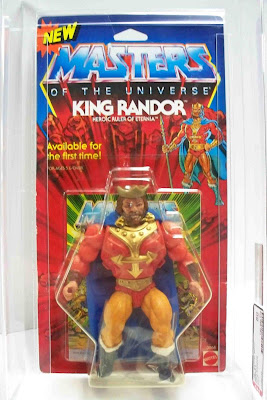 5. Masters of the Universe King Randor
There are two very good reasons why I never got King Randor. The first being that by the time of his release, I was gradually moving away from the He-Man toys towards G.I. Joe. The second is that he actually was hard to find. I really wanted a King Randor. He was featured in close to every episode of the cartoon, and for some reason, I liked the colors of his costume. I ended up getting a handful of the other 1987 MOTU figures, but never the King of Eternia. Today, I own the new, updated Classics version. A fantastic toy that has the best place on my shelf - and as I don't collect the old MOTU toys, I'm not going to make an effort getting the 1987 King Randor.


4. DC Direct Nightwing (from Hush)
(The cool dude pictured at the top of the article)

Hush was a gloriously awful segment of the regular Batman comic some time in the early 00s. It was meant to re-kindle interest readers had for the Dark Knight, and featured - over the course of 12 issues - every hero and villain even remotely connected to Bruce Wayne. Among them his first sidekick, Dick Grayson, former Robin - now Nightwing.
I picked up the Hush Batman, because it was sculpted after the artist Jim Lee - a personal favorite at that time. I had planned on getting a few more, like Harley Quinn, Catwoman and of course Nightwing. Such a simple costume and such a great character, Nightwing is definitely my favorite of the characters in the Batman comics - if not in the entire DC Universe. But this was at a time when I was heavily into Marvel, almost borderline hostile towards DC, and I was also a student with limited funds. When I finally realized I needed Nightwing on my shelf, I couldn't find him in any of my stores.
Today, I can just buy one online, no problem. But I still  haven't gotten around to it. 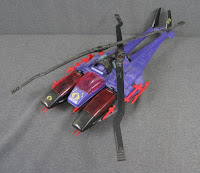 Like I said in the intro, I plan on doing a similar list with a selection of the G.I. Joe figures I missed out on, but I'll take a vehicle for this list. The Mamba was sort of a helicopter for the terrorist organization, Cobra. It got a lot of panel time in the comic, mostly as cannon fodder. But there was one issue where the Joes - the good guys - had stolen a Mamba, and used it to gain access to Cobra territory. Excellent stuff. As with King Randor, the Mamba was part of the 1987 line of G.I. Joe toys. I ended up getting a whole bunch of the 1987 toys, but never this vehicle, and that annoys me to this day.
I'm not blaming anyone for it. Certainly not my parents at least, who gave me big planes like the Phantom X-19. Maybe I never saw it in the store? Maybe it never made it to my country at all? Maybe I didn't put it at the top of my wish list?
I almost picked one up at the 2009 Collectors Convention in Kansas City, but by that time, I was actually quite satisfied with the size of my collection. I'll get a Mamba some day, but it will have to be unopened (there's something special about opening G.I. Joe vehicles) - and those tend to be expensive. 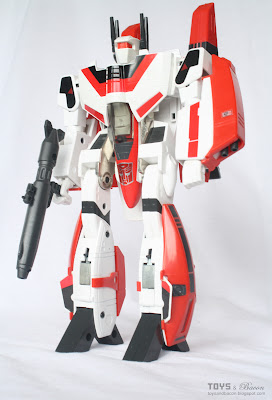 2. Transformers G1 Jetfire
You may have realized that I have fascination for the transforming robots before. You may also have read how I absolutely love the Japanese cartoon Macross. Back in the day, I only vaguely knew about Macross - through the American version, Robotech. And I didn't really collect Transformers toys, not the way I did with MOTU, Joes and Lego at least. I had a handful, but it was a very ordinary collection.

But there was one robot I wanted - it was the unlikely, but completely awesome unity of Macross and Transformers: Jetfire!
It was the best looking toy I had seen, by far the coolest robot in the entire Transformers universe (to this day, still). Those simple colors, the fairly realistic - yet utterly sci-fi design of the disguise mode. The completely bad ass look of robot. I'll do a Figure Friday on Jetfire sooner than later because not only do I have a lot to tell you about this toy - the story about the toy itself, but also the story of how I eventually came to owning one. You see, when I was done with studies and got a job, this was at the very top of my list of missed childhood toys I had to get.
And get it I did, with a vengeance. 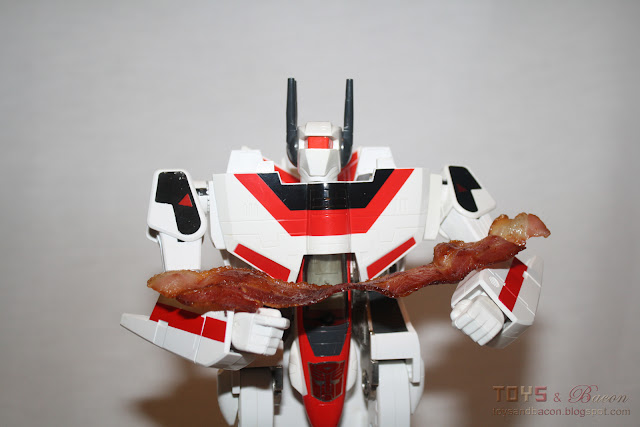 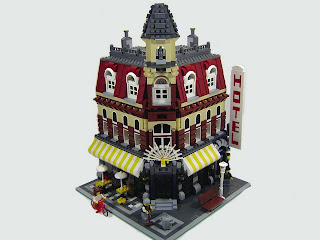 1. Lego 10182 Cafe Corner
I've told you before, how a recent, rather accidental trip to Legoland, Denmark sparked an interest in Lego. I had tons of Lego as a kid - which I have kept to this day. But I never considered myself an "AFOL" - Adult fan of Lego. But yeah, I  got the Space Shuttle, started collecting the Minifigures, and it was all on from that point. Except...

It wasn't. I didn't feel like getting random small sets. I wanted the gigantic ones. I could afford them, so why not?

TLG (The Lego Group) had just a few years earlier recognized fans like me, and in 2007, they started making massive sets with 2000+ bricks, realistic design, and complex builds. The most popular of the sets intended for AFOLs are the Modular Buildings. Large buildings of a somewhat classic ,19th century city design. Each floor is a separate module you can easily lift up. There's a lot of things with the Lego Modular buildings to separate them from the sets aimed mainly towards younger fans. First you have the sheer size. These buildings take many hours to build. Then there's the theme, it's not very action filled. And unlike lets say the fire station, you don't have any access to the back of the building. All four walls are present. 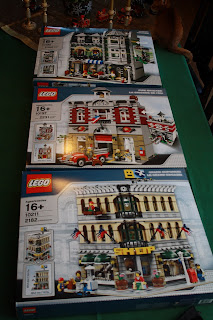 I don't own Cafe Corner. The first modular building from 2007. The second modular building is a lot smaller than the others, and I barely count it as part of this line. But I managed to get the next four.
Here's three of them, from top to bottom:
10185 Green Grocer
10197 Fire Brigade
10211 Grand Emporium
Not pictured is the latest one I have, the 10218 Pet Shop.

They retail for $150, which is a lot, but you get an extreme amount of Lego for the money. In fact, it's easily the most brick per $ outside buying loose, pre-owned Lego.
I was in time to get the others at retail price, but if I want Cafe Corner, I will have to get it on places like ebay.
It's going for $600 and up.
It's not that I can't afford it, but it's more that I can't justify using that kind of money on a single set. And I guess that's what I get for missing the bus. I wasn't consciously collecting Lego in 2007, so it serves me right for missing Cafe Corner.

But this is just me trying to be all cool with missing out... For instance, unlike the later ones, it doesn't have interior. Why would I want to own a Lego house with no interior?
Yeah, I totally don't need Cafe Corner.
Posted by Jon at 11:14 AM