A trip down memory lane with one of the many obscure but totally rad toy lines of the 80s! 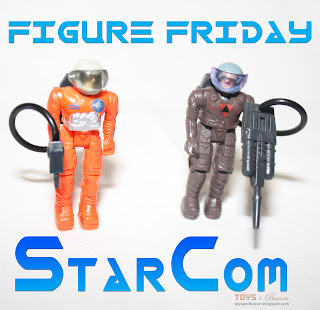 Read on for tons of pictures, some anecdotes and weird facts on these tiny, awesome guys.

I've mentioned before that I had a lot of toys as a kid. I still do, but I'm a collector, so that goes without saying. A big family is one of the reasons, another is that my older sister grew up as a child of the 70s - she got wooden toys, safe toys and home made stuff to play with. I guess my parents were compensating a bit, because I had a lot of plasticy war-toys!
Obviously my main toy lines were G.I. Joe, Masters of the Universe and Lego. No doubt about it. But I had a few figures from so many toy lines: MASK, Turtles, Battle Beasts, Dino Riders, Air Riders, and so many more. 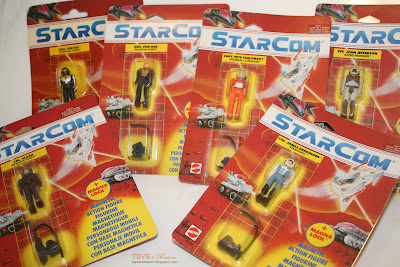 One line that I always liked, but never got heavily into was StarCom. I had maybe around ten figures, so far from the numbers of my G.I. Joes, which I talked a bit about on Wednesday.

Now, I don't really make an effort buying back all the toys I had as a kid, but the StarCom toys have been on my mind every once in a while for the last years. I remember them fondly, not only for their cute size, but also for their consistent appearance and their unique action feature. I'll get back to this soon.

As you can see, I went out and got some vintage, carded StarCom figures on a well known online auction site. These are all European releases, just like I would get in my stores back in 1991. And let me tell you: I totally nostalgia'd all over the place.

Ok.. What is StarCom? I'll give a simple run-down based off what I know, but for those that want the greater information, I strongly recommend this fantastic little fan page. Admittedly, StarCom isn't that massive of a toy line, but the guys behind starcomspaceforce.com have done a great job.

And as for my knowledge:
StarCom is one of the many cartoon/toy combinations that was popular in the mid 80s to mid 90s. I know nothing about the cartoon, I don't even think it aired in my country. I have never seen it at least. The toys were produced by Coleco, then later bought up by Mattel, who released the toys in Europe. In US, the toys were released with gorgeous card art, but here, we got the conformity of standard art. Booo.
The toy line had somewhere around 30 different figures, a whole bunch of space vehicles and a few play sets.

The theme seems to be pretty basic. Heroic dudes in battle with an evil galactic empire. But you know, it works. And the characters all seem to  play their part.
The villains have all ridiculously evil-sounding names, while the heroic dudes have heroic sounding names. To avoid even more confusion, the heroes, divided into three sub groups, are all brightly colored. The Astro Marines are green and and white, the Starwing pilots are baby blue, and the Starbase command squad are all red and orange. The Shadow Force - the evil guys (doh) - are brown. Like dark soil brown.

Action Figures
This is what it's all about of course, at least for me. I like cartoons, but I love action figures. 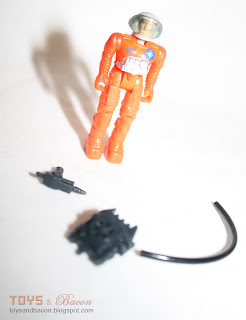 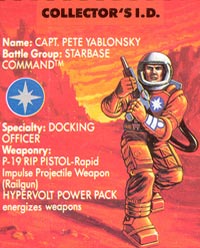 The first I opened was one I vividly remember from my childhood. The orange hero named Capt. Pete Yablonski. Yeah. that's right. Unlike with the US  release, the Euro toys has no information of the characters.
Clearly, Capt. Pete carries a tiny railgun, as well as a hypervolt power pack. How awesome is that??
These tiny guys are absolutely incredible! Before I explain further, just have a look: 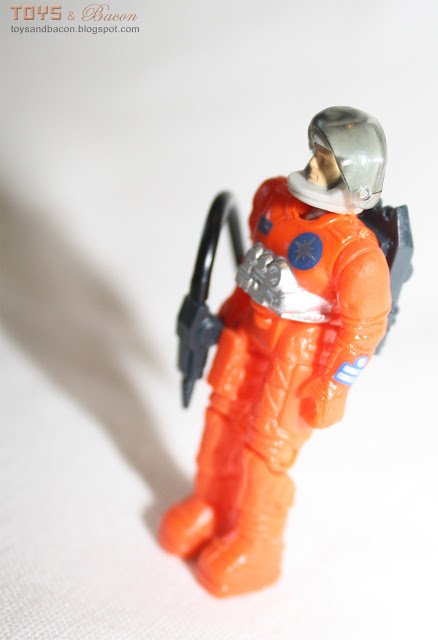 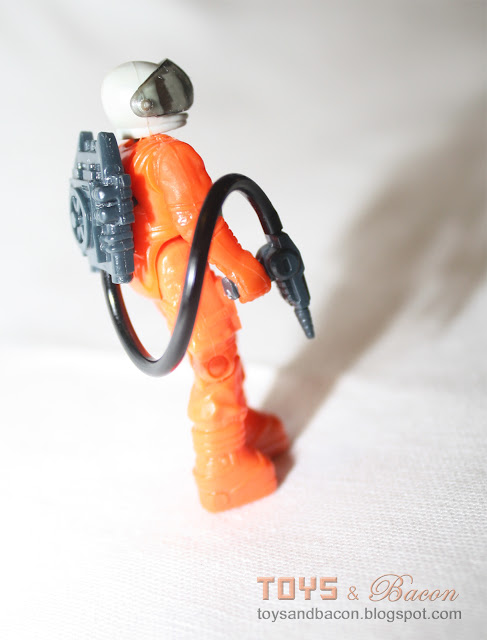 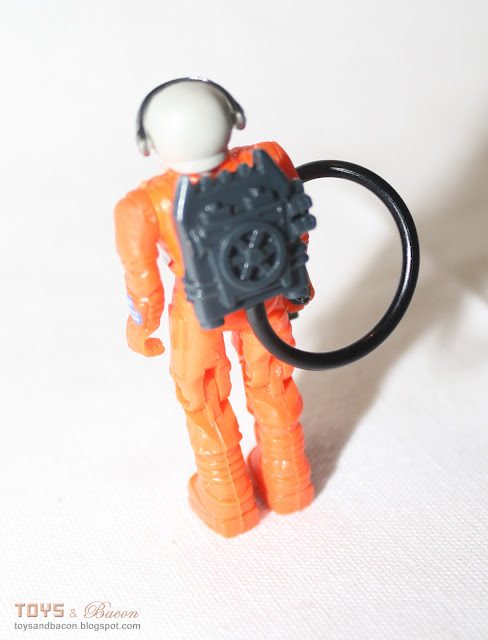 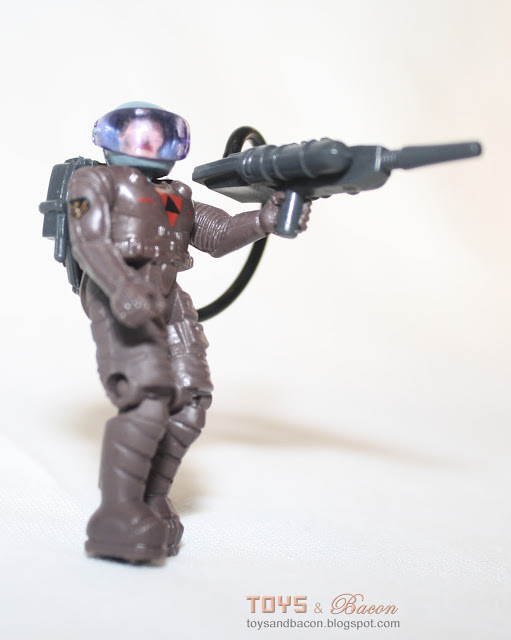 They have 7 points of articulation. Knees, hips, shoulders and a very flexible neck joint. Not bad at all.
In addition to this, they have a removable and adjustable visor on their helmets.They come with three accessories: A weapon, a backpack and a hose that connects the two. 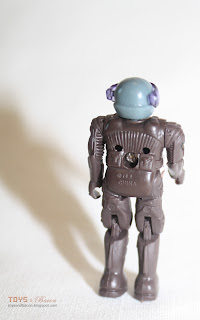 The construction is very simple, no metal parts, except for a screw that connects the front and back half of the torso. Unscrewing doesn't really do anything, so I suspect they are glued together as well.
Also notice the two smaller holes in the back. That's where the backpack plugs in.

All standard members of Shadow Force seem to share sculpt, as does all the sub-groups of the good guys. There are differences of the face sculpts though. Shadow Force has some robots with unique sculpt, and their leader, the General with the yellow helmet also has a unique sculpt.
I have to say, even though they are somewhat simple colored, they have a very good amount of sculpted details. And the paint, as scarce as it may be, is surprisingly sharp. 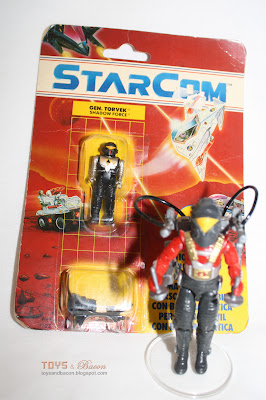 Size
If you remember these figures, you instantly recognize them for their size. They are tiny. Not Lego Minifigure small, but definitely among the smallest action figures to be sold one at the time.
That said, the card they came on still have roughly around the same size as the cards of a G.I. Joe figure.

StarCom figures are 5,5 cm tall (or small), that's something like 2.2 inces... Sadly, I couldn't find either a MASK figure or a Dino Rider for the most relevant size comparison, but I suspect StarCom still is the smallest.

Here's a few comparisons to some other toys: 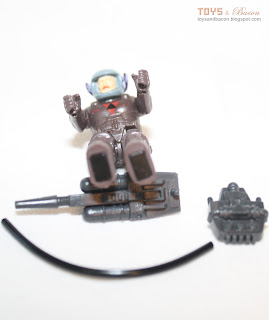 With magnetic power!
Now, I haven't gotten to the main thing about these toys. Their play feature. As announced on the card. It even has its own name... Magna Lock! That's too cool!
They all come with magnets integrated in their feet.
Obviously, this is meant to replicate the zero-gravity you'd expect to find in space.
I vaguely seem to remember these magnets had a tendency to fall out, but they seem pretty solid in place on these freshly opened figures.

I absolutely love this action feature, and even though it's not that ingenious, it's still something that set StarCom apart from the contemporary toy lines.

The magnets aren't particularly powerful, but they can easily hold the figure upside down  if it has both feet connected. Not that safe if they happen to lift one foot... 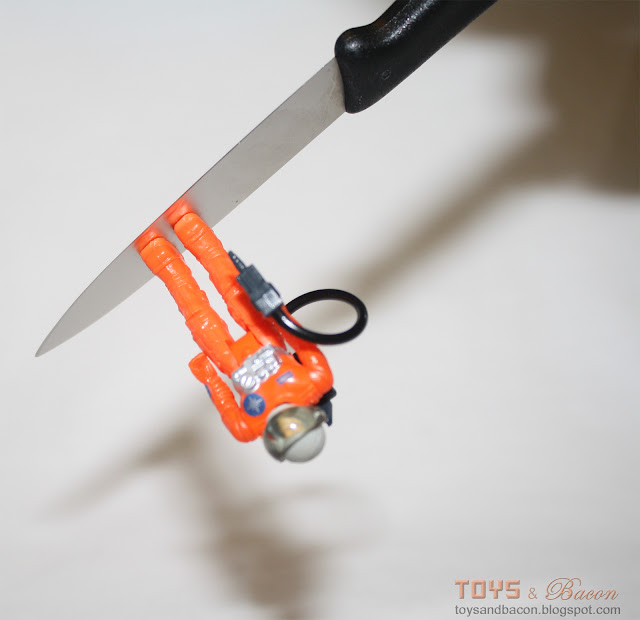 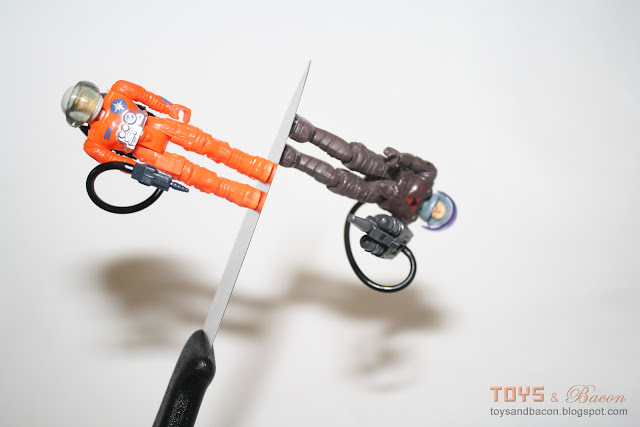 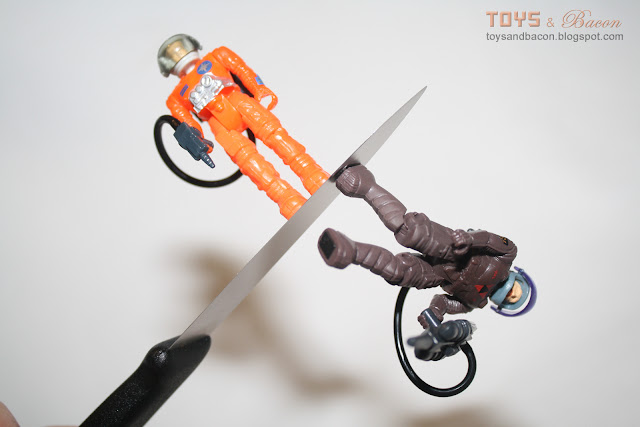 I can safely say I had a blast, and will continue to experience heavy nostalgic chills as I open the rest of these guys (and pose them on my fridge). I will also try out the cartoon, and I will definitely get a vehicle or a playset for the tiny space dudes.
StarCom, while definitely not among the most popular toy lines to come out of the 80s, is worth checking out. The good part of obscure toy lines is that they can be had a lot cheaper than the most well known. And the best part is that they will trigger something you may have forgotten... 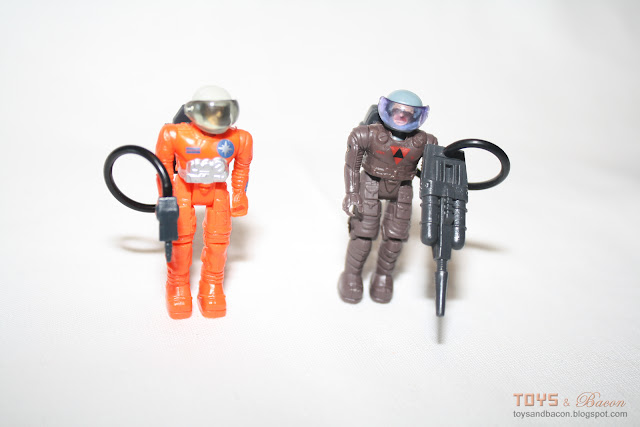 Have a great, magnetic weekend, people!
Posted by Jon at 12:07 PM

Been going through some old toys and came across a box full of StarCom. Mixed up in the box are 27 action figures with the weapons, backpacks, and visors all loose and detached from the figures. There is one purple visor in the bottom of the box, and I didn't have a clue who it belonged to, until I saw your close up photos. Is that Slash, with the purple/blue tinted face shield? Is that how he came, straight out of the package? It was driving me crazy not knowing who it belonged to. Please confirm that the close up photos are of Slash, and that his visor is tinted a different color, and that is the way he came. THANKS...I also enjoyed the Jetfire post, since he was another figure I recently rediscovered.

Yup, that was how capt. Slash came out from the card.

I love read your post about this Starcom...thanks for the good information. however, I have a question. Does the lego visor fit to starcom figure? I saw a picture of comparison. Please contact me for the answer, my email exs99@yahoo.com or add my fb : Orelle Ezral..thanks bro!

No, the starcom helmets and visors are smaller. No fit.